5 ways tribes can fight back against Trump 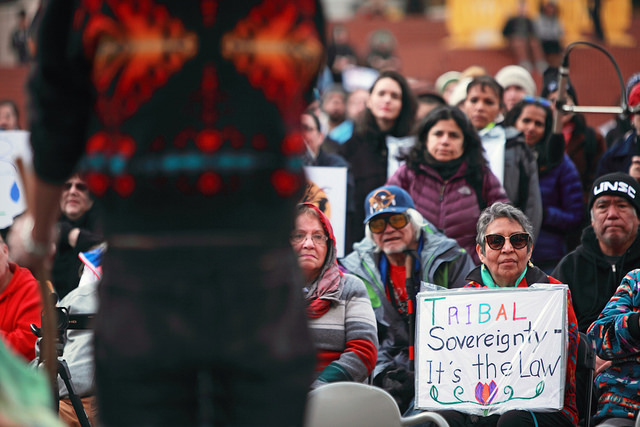 How does Indian Country survive the Donald Trump era?

The new administration is only a few days old and already the chaos of the times have upset business as usual. And possibly the very structure of federal-Indian law. On Jan. 24, President Trump signed an executive order directing the Army Corps of Engineers “to review and approve in an expedited manner” the Dakota Access Pipeline, which has been a flashpoint with the Standing Rock Sioux tribe, and reviving the Keystone XL pipeline, which stirred years of controversy.

And it’s not just Washington, D.C. The North Dakota Legislature in Bismarck acts as if it has permission to ignore the Constitution and legal precedent in its relationship with tribes. House Concurrent Resolution 3017 calls on Congress to “modify” the reservation system and put the state in charge.

This resolution will last about 15 minutes if and when legislators put a pencil to what it would actually cost taxpayers. Right now, for example, the federal government picks up the entire tab for Medicaid for American Indian tribal members. Add to that the operation of the Indian Health Service and we’re already talking millions of dollars and that’s only one program, health.

What’s really driving this is that North Dakota legislators are angry about Standing Rock and greedy for more oil and gas money from the Mandan Hidatsa Arikara Nation. So North Dakota is ready to assume government expenses for Indian Country across the state? Silly, rabbits.

But Indian Country is now a target, and many Trump supporters are emboldened by an administration that does not know how to say no to those who would trample on constitutional rights. This will be true for many who run federal agencies, state governments, oil, gas and coal producers, and the Congress. In their mind, Indian Country has had it too good for too long. Imagine that.

So what’s Indian Country’s response to the nonsense? Consider these five ideas.

1.  Don’t count out the bureaucracy. I first started covering federal Indian policy during the late 1970s. I was in D.C. and was interviewing someone about a reform project at the Bureau of Indian Affairs, a plan that I thought made a lot of sense. But my source smiled and responded, “I have seen them come. I have seen them go.” There are many ways to tie up initiatives — even good ones — through the process of government. Trump’s memoranda might fit into this category. Usually an executive order or a memorandum has a legal framework as part of the document, including citing the statutory authority for the presidential action. On Dakota Access and Keystone, that reference has been replaced by the logic of “because I said so.” We shall see.

2. Ronald Reagan famously said government is not the solution, but the problem. This era might prove the first part of that statement true, because the federal government’s inaction on such issues as global warming will make it less relevant. The rest of the world, even conservative allies of the Trump White House, are moving ahead on climate action. To pretend that oil, gas, and coal are the future is only a fantasy. There may be a temporary uptick in fossil fuels, but that cannot last. This is an opportunity for tribes to look for new allies outside of the federal government, even globally. The America First policy signals uncertainty in global governance, so perhaps the counter should be, First Americans First.

Tribes should work closer with cities, states, private companies, and any global government that’s open to help. The federal government is going to be close to useless for the next four years (unless the Trump infrastructure program happens, and includes Indian Country, but there is no evidence of that yet). The modern city state — think a Seattle, Portland, Minneapolis or Phoenix — as the real engines of growth in this country. What’s the best way for tribes to become partners?

3. Young people aren’t playing by the old rules, either. If the president wants change, he should look at what young people are already doing — and that direction is very different than his.

Take driving. The data shows that both Millennials and Gen-Xers have less interest in driving (and fossil fuel consumption) than any generation in modern history. A recent report published by Time found a “huge drop of 47 percentage points in 16-year-olds with drivers’ licenses. For people ages 20 to 24, there’s been a 16 percentage point decrease over the same time span. And for those ages 30 to 34, the decrease has been about 10 percentage points.” Young people say they are too busy. Driving is too expensive. And It’s easy to catch a ride.

Indian Country’s greatest advantage right now is young people, who make up more than 40 percent of our total population (compared to about a third for country as a whole). We have numbers working in our favor and should look for more ways to leverage that.

4. Don’t count out Republican vs. Republican. Right now, Republicans in Congress are giving President Trump the benefit of the doubt. They are willing to reverse long-held positions (such as free trade) because he’s the leader of their party and he claims to lead a movement. But as the decisions get harder, and the act of governing gets more complex, this will evaporate.

There is already evidence of this in the debate about repealing the Affordable Care Act. The idea of getting rid of Obamacare was a unifying force. But there is no consensus about what’s next. Republican governors fear that their state budgets will collapse if Medicaid becomes a block grant with less funding. Insurance CEOs fear their future if the mandate to buy insurance goes away while they are still forced to cover pre-existing conditions. And many Republicans in Congress know that stripping heath insurance from millions of people is not a recipe for winning reelection.

5. Document everything and be transparent. The Trump era is already defined by the wacky claim of "alternative facts." The antidote is to respond with hard evidence. We know that zealots are eager to reshape the federal government by shrinking it. So let’s document with that really means. What jobs are lost? (And how will those be replaced?) I’ve started a spreadsheet and will update it regularly.  This president has promised a new era of jobs, so lost work in Indian Country is not acceptable.

There are many ways for tribes to survive the Trump era. My main point is that we need to think differently. Usually a new presidential term starts with a president trying to bridge gaps and bring the country together. That’s not been the case from President Trump, so we should expect more of the same in the years ahead. It’s more important than ever to have a strategy, a plan for winning. What will it take? Who are potential allies? And what are alternatives that might work?

And, of course, we must start getting ready for the next election.