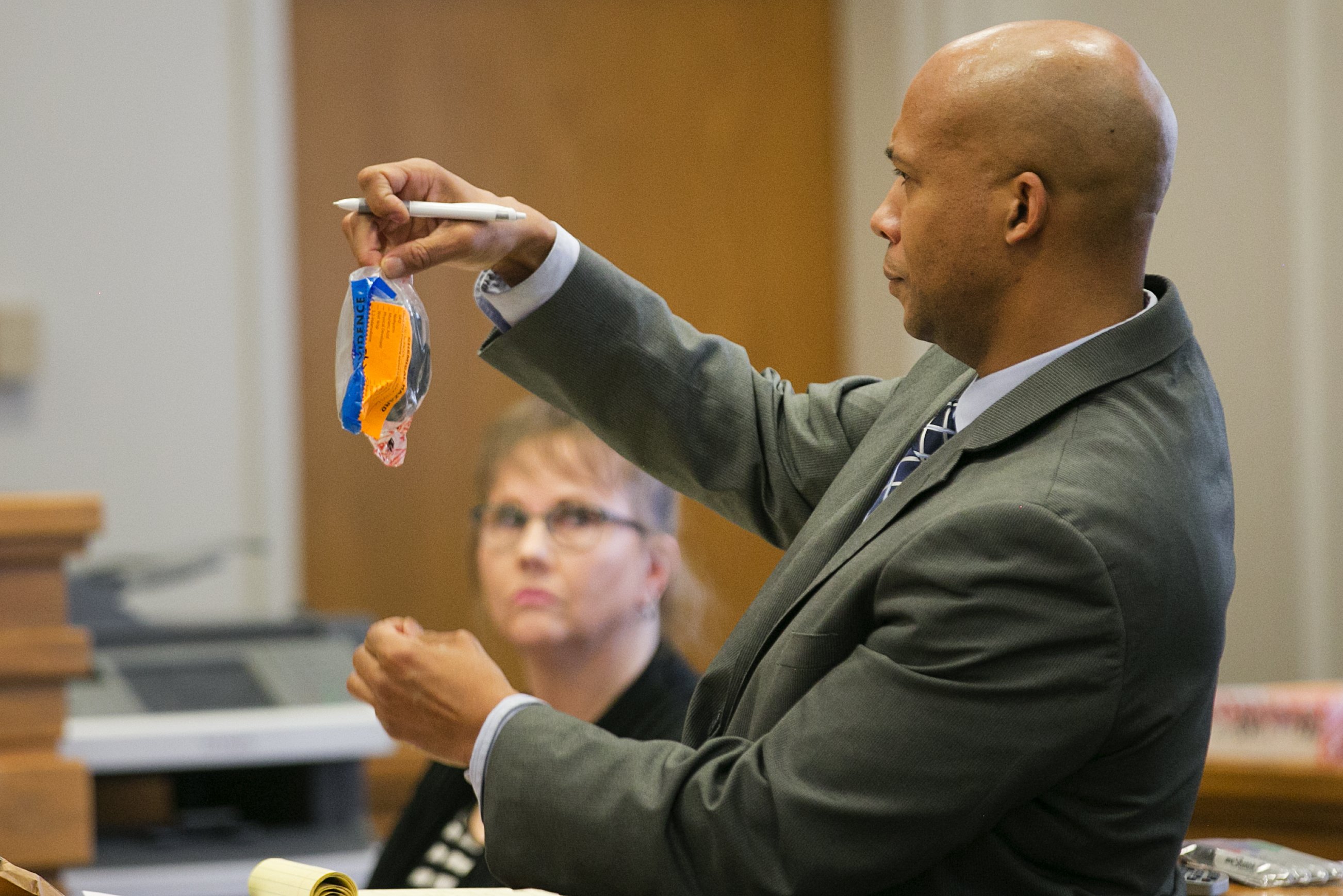 Attorney James Bible questions Seattle Fire Department firefighter Tim Hammill on Thursday while holding up an evidence bag containing a holster that was allegedly attached to the belt of Che Taylor on the day he died.

The inquest into the police shooting of Che Taylor, killed in the passenger doorway of a white Ford Taurus near Lake City Way last February, is not the stuff from movies: There are no verdicts, no hung juries, no scenes from 12 angry men.

At its end, those looking for closure — a litmus test that could read out whether Mr. Taylor’s death was right or wrong — will almost certainly be let down. Even on basic questions of fact, the eight jury members are free to answer as individuals rather than as an authoritative group.

The purpose of the ongoing inquest, which is standard for officer involved shootings, is to answer 52 yes or no questions, a record of the cause and circumstances of Taylor’s death as seen by people independent from either those who shot or the family of the man who was shot.

For many relatives to Che Taylor present in the King County Courthouse — including his mother, Joyce Dorsey, and brother, Andre Taylor — the inquest, which began early in the week, has been a long time coming: The one-year anniversary of Taylor’s death is at the end of this month.

A lot has happened since his death: Andre Taylor’s become the face of a campaign to change Washington laws on use of deadly force, garnering the support of prominent elected officials like Rep. Adam Smith, Mayor Ed Murray, King County Prosecutor Dan Satterberg and others.

In that period, the Seattle Police Department — through its internal investigation processes, revamped under a federal consent decree — deemed the shooting justified. Taylor, the department concluded, was reaching for a gun at the time of his death and Officers Scott Miller and Michael Spaulding acted accordingly.

But in a sign of the stubborn trust gap especially between communities of color and the Seattle police, the community surrounding Che Taylor have rejected that ruling. Simply put, an investigation done by the employers of Spaulding and Miller was never going to be the final word, especially with the preponderance of video evidence that Taylor’s supporters believe tell a different story.

An inquest is tricky: King County District Court Judge Janet Garrow drew strict lines around what, exactly, the jury is to consider, excluding for the most part larger questions of department policy. Of the 52 questions, none address whether de-escalation techniques were followed, among the most salient point of contention for critics who believe Taylor’s death was unnecessary.

Thursday marked the fourth day of the proceedings. While the first two days were occasionally emotional (when attorneys first showed the footage of the shooting, Taylor’s mother, who had not yet seen the widely circulated video, began to shout “my baby!”), it was not until Wednesday that the counsel representing Taylor’s family got to offer some of the strongest narratives for why the shooting and his death did not need to happen.

To the extent an inquest can prove anything, attorneys James Bible and Corey Guilmette sought to show several things, most notably that the plan to arrest Che Taylor for possession of a firearm was poorly executed, that the commands given to Taylor were confusing, and that, after he was shot, he was not given proper aid quickly enough.

Officer Timothy Barnes and his partner, Officer Audi Acuesta, were called to assist the team of Spaulding and Miller making the arrest on Taylor. The arresting team noticed Taylor near a set of apartments just on the edge of the Lake City and Roosevelt neighborhoods. He was a known felon and the officers say they saw him with a holster on his belt, illegal because of Taylor’s criminal history.

Spaulding and Miller were in plainclothes, in an unmarked car. In his testimony, Barnes said he and Acuesta, both in full uniform and in a marked car, were called to make it obvious the people surrounding Taylor were police.

Key to the questioning from attorney Bible was execution of the arrest. Barnes and Acuesta said they were poised nearby for more than 20 minutes, waiting to be called to the stakeout to assist Spaulding and Miller. According to Barnes, when he arrived at the scene, Spaulding and Miller were already moving in on Taylor. “As I was getting out [of the patrol car], two officers were approaching from the south,” said Barnes. “My intention was to fall in behind them and assist, but they got a lead on me,” saying he was a full five steps behind. Seconds later, Taylor was shot.

Bible was focused on the timing of the arrest in large part because Taylor was standing in the open doorway on the passenger side of the white Ford Taurus. Bible was attempting to show that the officers could have planned the arrest for when he was in a more open space, where it would be easier to see his actions.

Perhaps more significantly, the line of questioning was clearly trying to show that Spaulding and Miller could have waited longer for the arrival of Barnes and Acuesta.

Arguably the most significant focus of the Taylor family’s attorneys centered on the demands shouted at Che Taylor as officers were approaching. Specifically, the attorneys pressed that he received conflicting commands and Taylor’s behavior of apparently diving in the Taurus for a gun was, in fact, the result of his attempting to comply with both “Get your hands up!” and “Get on the ground!”

In his testimony, Barnes said, yes, there were four officers all shouting one command or the other and that “it’s not typical that we’d have four officers approaching at the same time.”

But Barnes also said he doesn’t believe those two orders are conflicting. Spaulding’s attorney, Ted Buck, sought to draw a distinction between Taylor and other suspects, apparently suggesting that most people in contact with police are able to comply with those commands. He tried to show that Taylor did not raise his hands high enough — comparing him to other people on the scene who did — before he quickly dropped them, a move that could be interpreted as going for a gun.

Taylor’s attorneys were also planning to lean heavily on the argument that Che Taylor did not receive medical care quickly enough. As Crosscut has previously reported, nearly seven minutes elapsed between when Taylor was shot and when he received aid. As the inquest sought to determine cause and circumstances of a death, their calculation was that how quickly he received aid was certainly relevant.

This argument was neutered from the outset, because of the aversion to policy issues built into an inquest process. So among the questions the jury are being asked to answer, there is nothing like, “Should the officers have administered aid more quickly?” The questions were instead, “Was the fire department called” (it was), “Was aid eventually given by an officer” (it was), and “If CPR had been administered earlier, would he have survived?” (a Seattle firefighter testified almost certainly not).

At the end of Thursday, Judge Garrow threw out the discussion of aid to Taylor altogether, saying it was not relevant to whether his death resulted from justifiable actions.

The inquest will take a significant turn Friday, when Spaulding and Miller will be called to the stand. That will be the first time since Taylor was shot that the public will actually be able to hear firsthand from the officers who pulled the trigger.

The inquest could end as early as Monday.