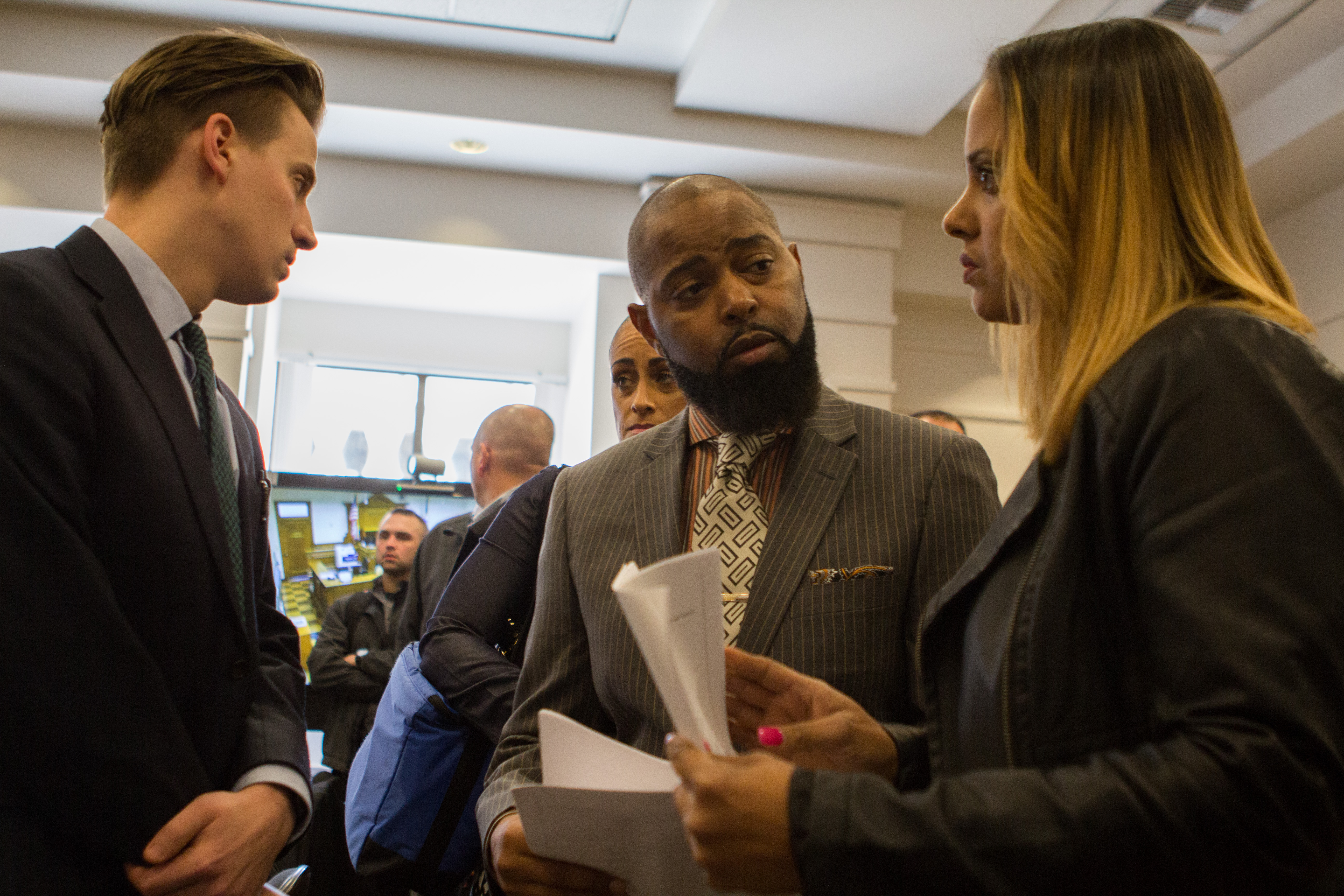 Andre Taylor and Devitta Briscoe speak after the inquest into the death of their brother, Che Taylor. Attorney Corey Guilmette looks on.

After a two-week inquest into the death of Che Taylor at the hands of Seattle police officers, the majority of the eight-member jury agreed that the officers did, in fact, perceive a threat to their lives.

The jury's answers to 55 yes or no questions about the cause and circumstances of Taylor's death at once gave credence to the fears of officers Michael Spaulding and Scott Miller, while casting some doubt on the particular claims of each.

The attorneys for the Taylor family took issue with the entire process, arguing both that the questions posed to the jury were overly limited in scope and that "feared for their lives" contained undertones of racism.

In an inquest — standard in the event of an officer-involved shooting — the jury members do not answer as a unanimous group as they do in standard criminal cases. Two jury members showed themselves to be slightly more skeptical of the actions that led to Taylor’s death; the other six took the words of the officers close to face value.

It’s important to remember that inquests do not elicit any verdict — no guilty or innocent, no punishment handed down from the bench (at the conclusion of reading the questions, one courtroom attendee wondered when the verdict would be read). It is conducted as a means to lay out the facts of an event.

Further, the narrative that’s presented is restricted to the questions the jury was asked to answer — not touching on what should have happened or what policies or procedures might have led to a different outcome, but dealing with what did happen. From the beginning, the lawyers representing the Taylor family were frustrated that some questions were excluded — questions concerning how quickly aid was administered, the fact that the gun found at the scene once belonged to a King County Sheriff’s officer and whether the Seattle Police Department insignia worn by Spaulding and Miller was obstructed by their guns.

“There were no interrogatories based on how Che Taylor felt,” said attorney James Bible after the proceeding, “because he was not here to testify.”

When the inquest was finished, Bible took issue with the entire process. Families of the deceased are not afforded public defenders, usually leaving the inquest to the lawyers of the officers and a neutral King County Prosecutor. Bible, and another attorney Corey Guilmette, took on the case for free, making this inquest an exception to the general rule.

The most concrete appraisal of the situation came in response to the questions of whether the officers were in fear for their lives. For Spaulding, seven jury members said he did; for Miller, six said yes, one said no, and one was unsure.

This can largely be seen as vindication for the officers, offering a consensus that they were not acting, in the words of Washington state law on deadly force, out of “malice,” but rather out of genuine concern for safety.

But it’s also notable that neither received unanimous answers of yes, indicative of how this process was never going to close the door on doubt. Jenna Mitchell was one of those skeptical jurors. “From my perspective,” she said after the inquest, “there needs to be additional investigation. I think there were only three people there that knew what happened and one of them is dead.”

In the end, she said, “I felt good about my decisions.”

The Taylor family attorneys, Bible and Guilmette, sought throughout the proceeding to cast doubt on whether Che Taylor was in fact reaching for a gun. They repeatedly worked to emphasize that only Miller ever saw the gun and not Spaulding, who fired six of the seven shots. They also focused heavily on the fact that the officers shot Taylor 45 minutes after Miller saw the gun in a holster and did not ever see the gun in Taylor’s hand.

On this point, the Taylors’ attorneys succeeded on a certain level. The jury unanimously said the officers never saw a gun in Taylor’s hand. And while six members said Spaulding saw Taylor reaching for his holster, none said Miller saw his hand reaching for a gun, even though he claimed he had. But six jury members still gave Miller the benefit of the doubt that he believed Che Taylor was drawing a gun.

Also of note, the jury unanimously said that, at first, Taylor showed his hands, suggesting an initial compliance with the officers’ commands. For the Taylors’ attorneys, this was proof that he was attempting to comply. But Ted Buck, Spaulding's attorney, contended that, while it may have been his initial reaction, Taylor was going to do whatever he could to avoid prison.

Bible and the Taylor family did not rule out the possibility of bringing a civil suit against the officers, although Bible said that no suit is imminent as the family needed to “heal.”

Buck said he hoped the results from the jurors would “throw a damp towel on the lawsuit.”

Unanimously, from the judge, jury and attorneys, the Taylor family was offered condolences. Attorney Buck called the whole thing “ugly.”

When asked if this process had brought them any closure, the family's answer was basically no. “When your son, brother, daughter, dad dies, there is no closure,” said Bible. “Sometimes after hearings … when everybody thinks it’s all done is when it’s actually the worst. It feels like everyone is walking away and forgetting about it and you’re left to remember.”

“The person that dies and their families will never feel relief.”

"The story of a police shooting: Are there answers?"

"7 minutes down: Police shot a man, then let him bleed"