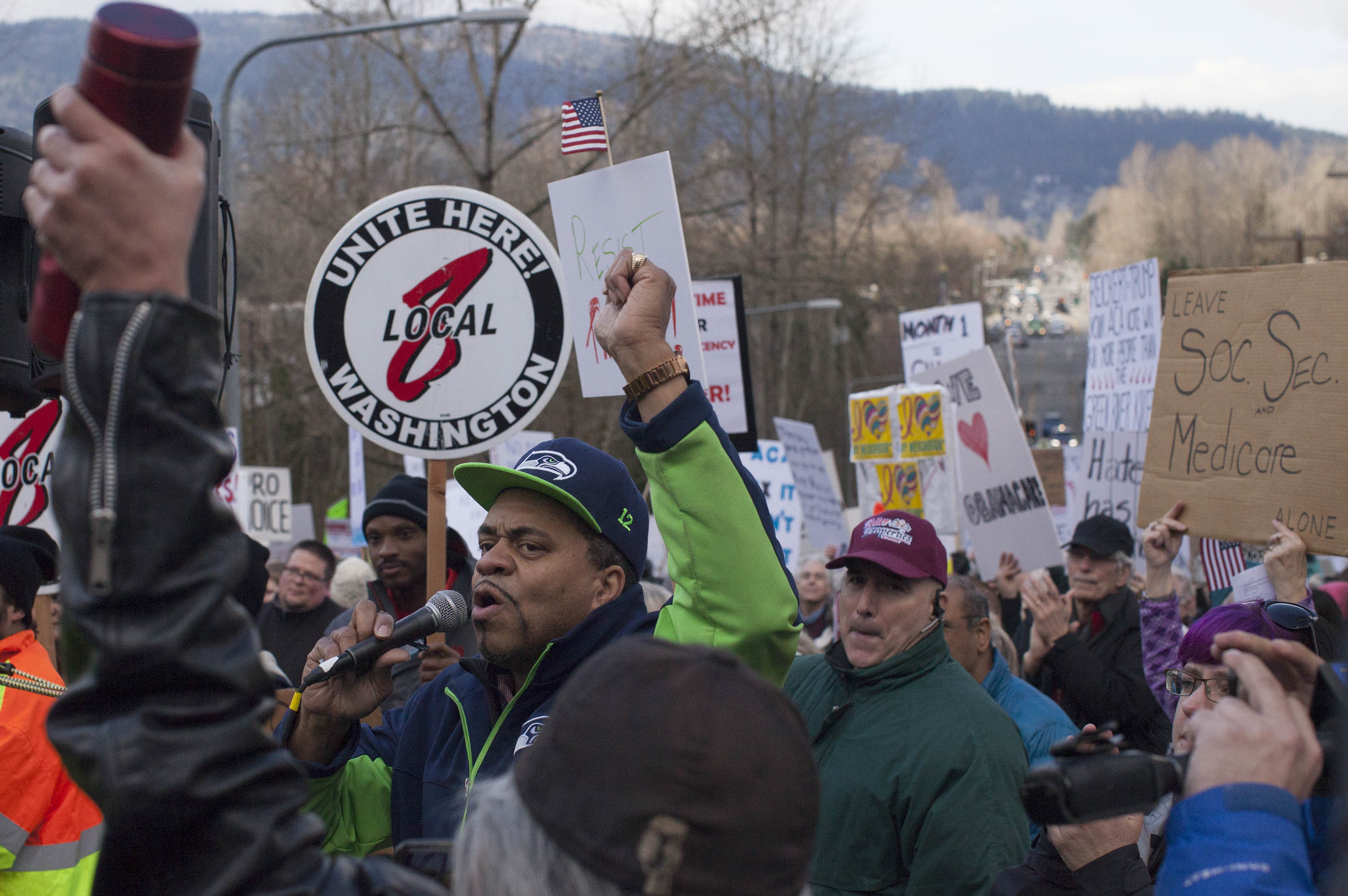 Protesters gather near the office of Republican congressman Dave Reichert in Issaquah, Washington on Thursday, February 23, 2017.

When U.S. Rep. Dave Reichert appeared on a KCTS 9 livestream Thursday, his message for those constituents demanding he host a public forum was clear: Don’t hold your breath.

“I’m not going to do a town hall,” said Reichert, the longtime Republican representative from the Eastside. “They’re just not productive.”

But as the more than 1,000 protesters near his Issaquah office earlier in the day suggested, that answer may not fly with some of his constituents.

Along with other Republican members of Congress in the state, Reichert has faced criticism from his constituents for not holding any town hall-style public meetings since the inauguration of President Donald Trump. Some allege he has even gone so far as to lock one group out of his office — although the same group acknowledged that some of their members later met with his staff.

Reichert defended his position Thursday, calling public meetings a security risk — and cutting a wide path around the more controversial of Trump’s policies.

“I’m not willing to place my staff in a security situation,” Reichert said. Reichert made the argument in somewhat more pointed form the other day, telling Q13 Fox that he stopped doing town halls after the 2011 assassination attempt on then-Congresswoman Gabby Giffords and the shooting of 18 other people in Arizona at a public meeting she was holding. Several Republicans have raised that argument, leading Giffords, in a series of tweets, to urge them to "have some courage" and hold town meetings to hear from voters.

During the KCTS 9 interview, Reichert said that his office had received many uncivil calls, and staff had even been physically harassed inside their public offices. He said that he sees town hall gatherings as having one inevitable outcome. “My view of town halls today — it’s degenerated into a shouting, yelling, screaming match,” Reichert said.

Reichert insisted he was personally willing to talk to anyone, but in smaller group settings. Reichert also said the stance wasn't a change for him and that he'd similarly denied tea party demands for a town hall.

Along with his defense of his town hall strategy, Reichert did touch on some specific policy issues, including immigration and Trump’s executive order and his stance on an Obamacare repeal.

On Obamacare, Reichert said he wouldn’t vote for a repeal without a replacement. On immigration, Reichert acknowledged being troubled by the notion of police being put in the position of immigration enforcers, and how that might complicate the already fraught job of getting witnesses to talk. And on the right of transgender students to access bathrooms in schools around the country — Trump this week overrode his education secretary to cancel a federal endorsement of the right — Reichert expressed relief that Washington state would be able to continue its own protections.

Yet notably absent from the interview was any sign that those individual objections might collectively amount to something larger for Reichert. Instead, over and over Reichert pointedly distanced himself from a Trump policy, only to stop just short of objecting to it — or to Trump — outright.

Perhaps the most telling moment came when Reichert was asked by interviewer Enrique Cerna about Steve Bannon, the far-right media personality chosen by Trump to serve as one of his closest advisors and for a seat on the National Security Council.

First, Reichert demurred, saying he didn’t know Bannon personally, and didn’t know enough about him to make a judgment.

But Cerna pressed the issue, pointing to his well-documented role as the head of Brietbart news, and his association with the anti-Semitic and racist views of the so-called “Alt-Right.”

In response, Reichert acknowledged that he is, in fact, familiar with at least the basics about Bannon.

“I don’t think you can ignore those things,” Reichert said, adding that he found them troubling. But the prospect that such a history might justify congressional objection didn’t seem to connect for Reichert. Instead, he would only say that he thought Bannon deserved the same oversight as other appointees.

“I’m aware of that past history, but people change,” Reichert said.

Compared to his tea-party Republican colleagues, Reichert is generally considered more moderate. But the scene in Issaquah paid no mind to how moderate Reichert may be. Anyone seen to be supporting Trump is in the crosshairs, just as any supporter of the Affordable Care Act was in the crosshairs of tea-party activists in 2009.

The more than 1,000 people who lined the streets near Reichert’s office hours before his appearance at KCTS looked a lot like the crowd that attended the post-Inauguration women’s march last month: majority women, majority white, majority middle-aged. And like the women’s march, it was a microcosm of a larger movement that has led to combative audiences at public forums held by Republican members of Congress across the country.

The protests have generally included complaints about the Republican plan to repeal the Affordable Care Act, the unwillingness of Congress to demand that Trump release his tax returns and Russia’s involvement in the election, among a slew of other issues. Or, as marcher Judy Hallisey of Cle Elum said, listing off her complaints, “I need a sign 6-feet long.”

Among the marchers, many were frustrated with his appearance on KCTS (a sister organization to Crosscut), painting it as a shirking of his responsibility to meet in person with constituents. “It shows he’s ashamed and afraid,” said Devora Eisenberg, a teacher from Seattle. “He’s a coward."

Some activists had less strident but still critical responses.

Janet Carson, a stay-at-home mom from Sammamish, described herself as a relative centrist who wasn’t involved in politics before joining Indivisible Washington’s 8th District. She watched the interview with the group at an Eastside library.

“I did not come away feeling that he was pressed. I felt like he could dodge questions,” Carson said of the interview. At one point in particular, Carson said it seemed to her that he gave contradictory answers about his pledge not to repeal the Affordable Care Act without a replacement.

“There was no follow-up question when he completely changed his answer partway through,” Carson said.

Overall, Carson said, the format seemed to give Reichert a chance to avoid the one thing that critics want most from the in-person meeting they have sought: being pushed to take a firm position on the moral agenda presented by Trump.

The full interview can be seen here.