Democracy Vouchers -- off to a slow start 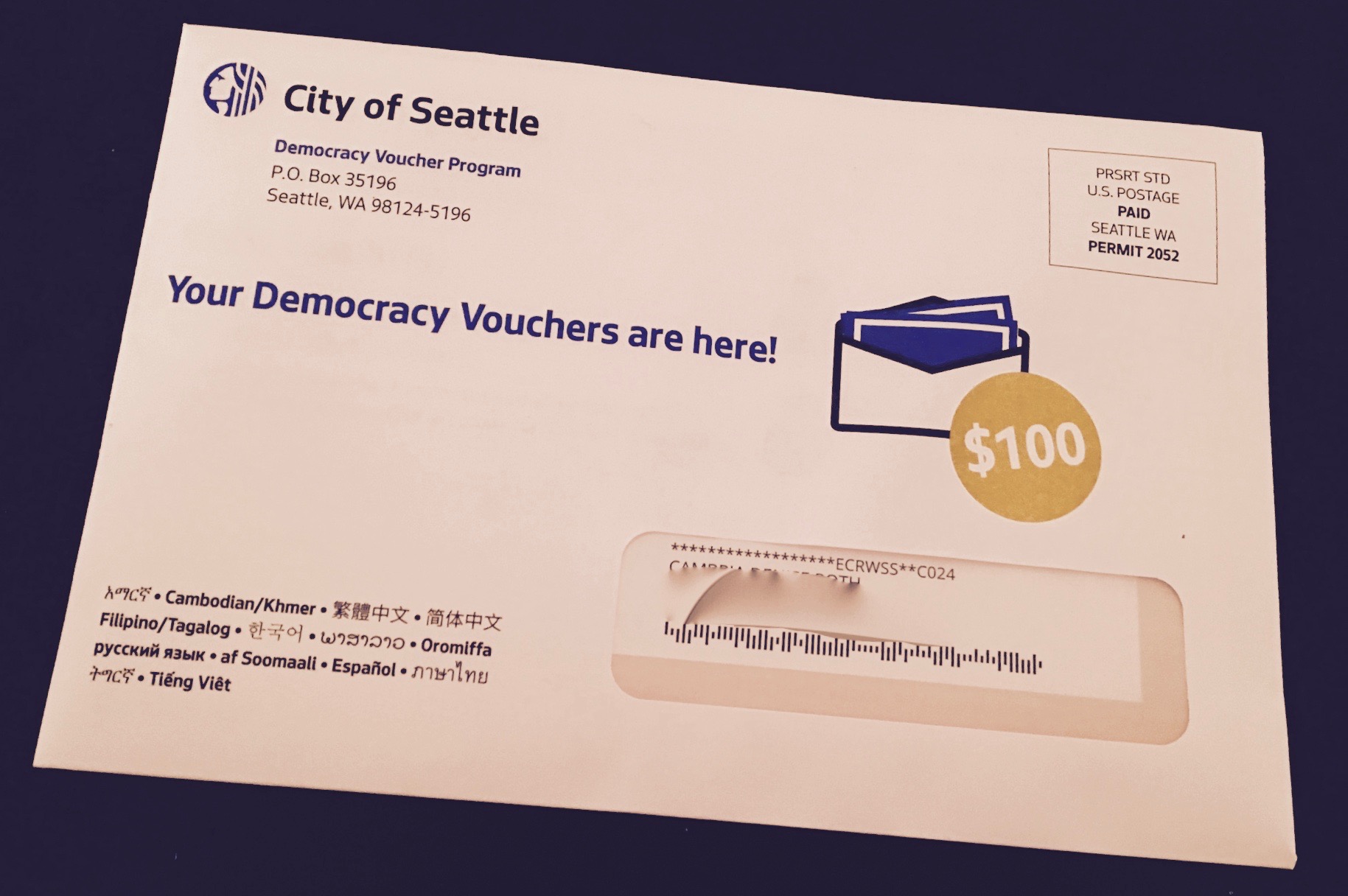 Holmes will almost certainly win re-election next fall. He's popular, and he's working with one of the highest profile political consultants in the city — Christian Sinderman, who has a reputation for raising gobs of money on behalf of Seattle’s so-called “moderate” lefties (radical by D.C. standards). But when it came to Seattle's latest campaign financing experiment, he figured he might as well “give it the old college try.”

In doing so, Holmes is among the first and least likely candidates to use the system, which some consider revolutionary while others say it's dubious. So far, he says, he's spending most of his time not campaigning, but explaining what, exactly, these slips of paper really are.

The vouchers are a first-of-their-kind experiment in publicly financing political campaigns, with a creative twist: Every Seattle voter gets four, $25 vouchers to distribute to the candidate of their choice. It’s a system meant to both encourage more participation from lower-income voters and offer low-profile candidates the opportunity to mount a meaningful campaign through legwork.

When you think of who might benefit from such a system, someone like Jon Grant comes to mind. Business groups and other high rollers don’t love him; he’s more popular among the advocacy organizations in the city, which don’t generally have as much money to throw around.

Grant ran against Councilmember Tim Burgess in 2015, pitching himself as a man of the people and Burgess, a client of the same firm representing Holmes, as a man of business and the donor class. Grant lost handily. He blamed that loss on the vast spending gap between the two.

Wasting no time, Grant demanded a repeat of the race in 2017, confident this time around that the democracy voucher program would close the gap. "We see it as a way to have grassroots candidates in the political arena," he says. "What we’ve found is there’s a whole new swatch of voters that are getting involved. About 75 percent of people hadn’t donated to our campaign before."

Holmes, on the other hand, is not a low-profile candidate. While Grant sees the voucher program as a necessity, Holmes could easily raise all the money he needed through high profile fundraisers, similar to the ones Mayor Ed Murray has already hosted for his campaign. Murray, also a client of Sinderman’s, has raised over $200,000. (Mayoral candidates are not yet eligible to collect democracy vouchers.) “I was going to amass a war chest, but then we started to think about it and said, wait a minute…let’s give it a shot,” says Holmes.

When asked why, Holmes says, “I’m curious how it all comes together.”

No one has declared against Holmes and, barring some extremely high-profile name from jumping in, he’s positioned to walk to an easy re-election. Unlike the increasingly competitive race for council position 8 (Burgess is not seeking re-election, opening the flood gates to candidates), Holmes has the luxury of time.

And it’s a good thing too because much of that time is going into educating potential donors on what they’re to do with their vouchers. So far, says Holmes, people don’t really understand. He says he routinely spends 15-20 minutes just talking people through the process.

To qualify to collect democracy vouchers, Holmes had to first collect 150 small donations — the rule is a buffer against people who might not take them seriously, a fitness test of the candidate’s commitment to grassroots campaigning.

After qualifying, the candidate is then allowed to circle back and ask for the democracy vouchers.

Over the phone, Holmes delivers his pitch. “It always starts with, ‘Hi, I’m up for election this year and we’re trying something new that voters approved two years ago. It’s called Democracy Vouchers. There’s two things: I have to qualify first and get the signatures of 150 people.”

At that point, he says, people will occasionally “go ahead and sign and give you ten bucks if you stop talking.”

Now that he’s secured those signatures, he’s on to actually collecting the vouchers. “I can tell you, it’s very rare for anybody to say, ‘Yeah I’ve got mine and I’m ready to sign them,’” he says. More often people “I need to look to see if I can find them.”

One friend of his dropped off her vouchers, but hadn’t signed any. Holmes had to circle back and get her signatures. “It’s really convoluted,” he says.

Grant describes a similar experience. "It’s kind of tough," he says. "If a voter doesn’t know who you are, it used to be the entire battle was explaining who you are and what you’re about. Now there’s the second part of explaining the vouchers."

None of this is surprising. No other municipality has ever done anything like this before and despite the large amount of effort that went into spreading the word, it’s always been a challenge to get people involved in their local political processes.

At a meeting last week of the Seattle Ethics and Elections Commission, manager of the program, Rene Lebeau said they’re getting a really large response, a combination of excitement and confusion. People have been asking, she said, “What is this? How did it pass? Who came up with this? How’s it paid for? If I don’t use them, what happens?”

They are receiving a decent number of the vouchers already and they are sensing excitement, but, said Lebeau, “It just a new idea. I keep reminding myself this is new.”

One puzzle that’s already come up is a question of whether candidates’ contributions to their own campaigns is capped like other individual donations. Commissioner Bruce Carter worried about a “risk that was not identified is that someone of means could come in late in the game with a lot of money,” therefore currying the positive image of someone using the voucher system, but then privately funding it.

In the end, the commissioners decided not to clarify the language of the rules and not cap candidate contributions.

Holmes is still on the fence about the vouchers. He’s at “Wait and see. It’s an awful lot of process. I also, in my office, see all the needs of the city and think, gosh every spare dollar could go to homelessness and police reform.”

But at the same time, he acknowledges the potential of getting more people involved. Besides, it’s gotten the City Attorney of Seattle walking the streets, knocking on doors when he didn’t have to be.