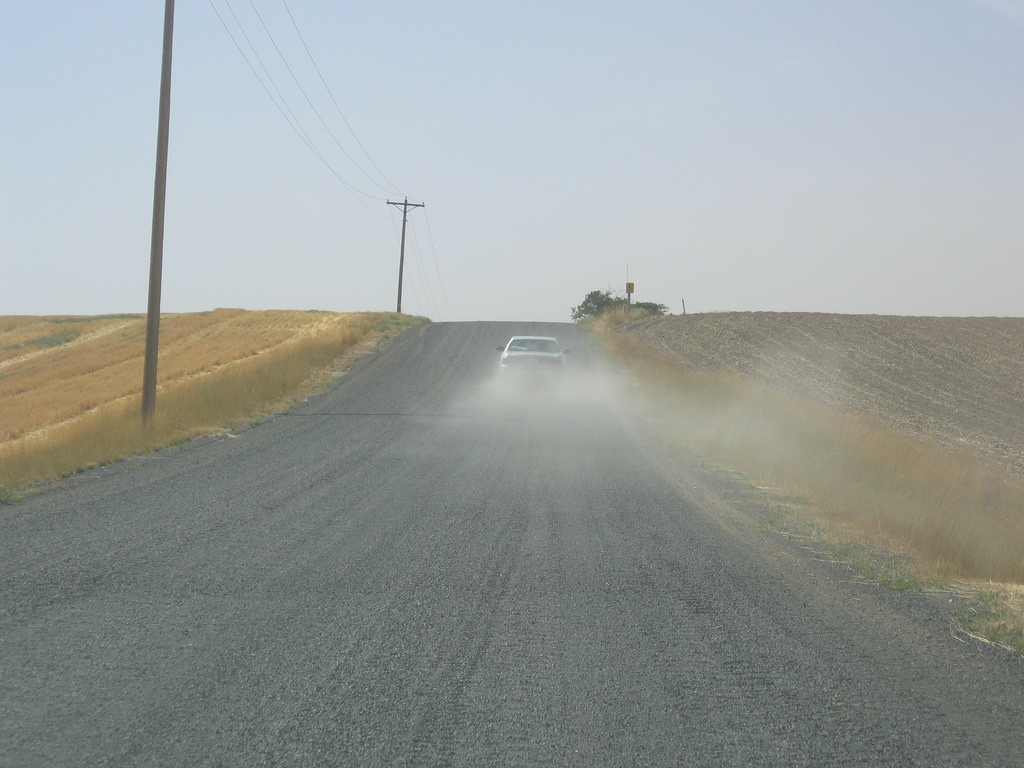 A car heads down a gravel road in Eastern Washington, where some counties are having trouble keeping up with road expenses.

The city of Rosalia, about 40 miles south of Spokane, brings in $660 dollars a year in property taxes. A good chunk goes to paying the roughly $200 phone bill of city manager Jenna McDonald. They’d like to ask voters for money to help fund roads, but it costs $1,200 just to get a measure on the ballot.

In Klickitat County, they no longer have a 24-hour law enforcement presence. In Lincoln County, officials recently had to divert $500,000 from their road fund to pay for police officers. In Kittitas County, two sheriff’s deputy positions went unfunded. In Pacific County, the jail often only has one employee when, according to Sheriff Scott Johnson, it should have four or five.

The state Senate Local Government Committee heard these stories of underfunded roads, disappearing cops and short-staffed jails Thursday as legislators considered a bill to change what is generally known as the Tim Eyman property tax cap. The measure, originally promoted by the initiative entrepreneur, generally limits local governments to raising taxes by 1 percent a year.

The proposal under consideration would adjust property tax rates to correlate with inflation and population growth without counting toward the cap, plus raise the cap to 5 percent growth per year. The idea is to keep a limit on what local politicians can do, while closing the gap many opponents of the cap say is widening between revenues and expenses.

Opponents of the proposal, Eyman most notably, say that under the existing law, if politicians want to raise taxes, they may, so long as they ask voters first.

Astonishing among those testifying in favor of the changes was how many of them voted for the proposal in 2001, when Eyman first ran it as an initiative, who have since changed their minds. These are not King County liberals, but self-professed rural county, fiscally conservative Republicans. Kittitas County Commissioner Paul Jewell remarked to the committee, “How difficult it is to appear in support of this bill. We don’t want much of government services and we certainly don’t like talking about tax increases as a rule.” He voted for the cap in 2001. “I was wrong,” he said.

Eyman’s initiative passed easily in 2001, with every county but King and Whitman voting in favor. But years later, the Washington Supreme Court overturned the initiative, saying the voters had not fully understood what they were voting for. (Eyman Thursday called it the “goofiest ruling in the world.”)

The Legislature quickly reinstated the cap. Still, it’s widely referred to as the Eyman cap.

King County has always hated the cap. But as Crosscut reported last year, it’s arguably the rural counties — the ones that voted most favorably — that struggle the most under it. While the sales tax and the real estate excise tax buoy the metropolitan areas, the sparsely populated areas of Washington lack the diversity of revenue streams to make up the gap.

As Josh Weiss, director of policy and legislative relations with the Washington State Association of Counties, told Crosscut last year, there's a lot of talk from smaller counties about the revenue gap. “King County has a lot more funding sources and resources generally speaking. Lincoln County is thinner. They don’t have the efficiencies of scale. Where you’ll see program pressures in King County, they’re struggling to have people even answer the phone.”

Speaking Thursday, Eyman was his normal, combative self. “I’m tired and voters are tired of listening to government’s incessant childish whining about this effective, proven, flexible property tax cap,” he said.

Among county-level elected officials, Republican and Democratic, Eyman is losing his support. But in Olympia, several Republican senators still had his back, most vocally from Sen. Jan Angel, R-Port Orchard, who pushed the county representatives to be more creative with revenue.

There are also appears to be a disconnect between the Republicans who have to oversee budget cuts in their cities and counties every year and Republican voters. If support for Eyman is slipping among the former, it is perhaps not so fleeting among the latter. As Lincoln County Commissioner Rob Coffman, a Republican opponent to the 1 percent cap, said last year, “I’m not sure anybody wants to have their property taxes raised.

“I think it’s going to be a tough sell in Eastern Washington, but that doesn’t mean it’s not important."