Grizzlies in the North Cascades: Do we want them back? 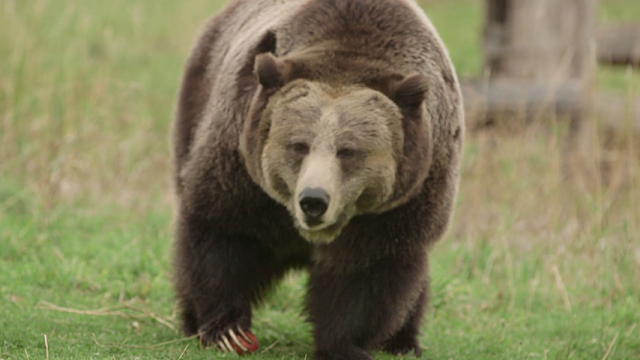 A captive grizzly bear at Washington State University's Bear Center. Before hibernating, grizzly bears can put on 10 pounds a day.

This story is a production of NWPR/EarthFix.

About 16 pregnant ewes lounge beneath a lone tree on a ranch in north-central Washington’s Methow Valley. They stand up, shaking snow from their heavy wool as Kate Haven and I walk closer.

Her two sheepdogs notice us from about a football field away. They recognize Haven, but not me — prompting them to start barking out of a sense of duty to protect their flock.

“So that’s Callie there. She’s about two-and-a-half. And that’s Alfred,” Haven said, petting the beefy sheepdogs on their heads. This pair is new to the farm. Haven hopes they’ll be just like the early generations of sheepdogs who kept fierce watch over her flock.

“When they sense a threat, usually the female, she would just go around and get all of the sheep in a corner of the pasture, and she would just plant herself in front of that flock and stand there,” Haven said. “And then her brother would go right up to the fence line and bark and try to chase off the predator.”

Usually that’s a coyote or a cougar. In the springtime,Haven sees black bears come to feast on berry farms and orchards in the valley where she and her partner, Bill Tackman, operate the McFarland Creek Lamb Ranch.

For Haven’s part, she feels secure, even though the ranch backs up to wilderness. She puts all her confidence in Callie and Alfred. And also in the ranch’s expensive 5-foot fence with a double-barbed wire rim. Haven said, for now, her attitude is live and let live.

“I’m actually thrilled to have wildlife thriving all around me. Bears, wolves, cougars, other predators — they’re part of nature. And that’s what we live with,” she said.

Others, including fellow ranchers and recreationists, aren’t so sure. Far from it. They worry about safety. They’ve dealt with livestock losses from wolves and are feeling some predator PTSD.

George Wolner and his wife, Tina Champeaux, are with the Skagit County chapter of Citizens Alliance for Property Rights. Wolner is very worried about an errant grizzly bear wandering onto his 17-acre property and feasting on livestock if enough berries and other food aren’t available.

He makes this comparison: “If I don’t get lasagna one day, I may have to eat chili, OK? And if they get hungry enough, they’re going to eat what they can get.”

“Yeah, they will,” Champeaux agreed.

They worry that if their livestock is attacked, it would be difficult to get compensated for the damage — and they’re convinced they wouldn’t be paid a fair market value.

The government is proposing several options for recovering grizzly bears in the North Cascades. Plans range from doing nothing, to bringing in a few grizzlies slowly, to even more aggressive relocation efforts. The ultimate goal would be to increase the population to 200 bears over anywhere from 60 to 100 years.

People can submit public comments on the draft environmental impact statement at open houses across the state. All meetings are scheduled for 6-8 p.m.:

U.S. Forest Service wildlife biologist Bill Gaines has spent his entire career educating people about grizzly bears — from how they could affect hiking trails to their diets in the North Cascades:

“Fifteen to 20 percent is animal material: fish, deer carcasses, elk. Eighty to 85 percent of their diet is from vegetation: shrub fruit like huckleberries, salmonberries. There’s quite a long list of berry-producing plants,” Gaines said.

Gaines and his team have documented more than 120 bear-friendly shrubs in the North Cascades.

He says there's another reason this area is prime grizzly habitat: its ruggedness. It’s vast wilderness with swaths of secluded terrain.

Trading records from the Hudson’s Bay Company indicate this area used to play home to thousands of grizzly bears. In the mid-1800s, records indicate trappers traded nearly 4,000 grizzly hides through forts in the area. (All of that may not have come from the North Cascades, but Gaines said that indicates there was a healthy population here at one point.) But decades of excessive hunting and isolation from other grizzly habitat has left the population in trouble.

When Gaines began documenting grizzly habitat — in hopes of designating a grizzly bear recovery area — he thought there could be 20 bears roaming the mountains.

More recently a team of biologists hiked — sometimes for days — to set up traps in an effort to snag some grizzly bear DNA. They’d string barbed wire knee-high around a tree, with a pile of sticks in the middle. On top of the sticks they’d pour a fermented soup of dead fish and roadkill deer. Vile to us. Irresistible to bears.

“It’s hard to put into words how bad it is,” Gaines said.

One guy spilled some on his pant leg. The only solution was to cut the pant leg off with his pocket knife.

They carried plastic water bottles full of the stuff into the Pasayten Wilderness and through rarely traveled backcountry. Gaines estimates after years of sometimes weeklong trips they’ve covered about 25 percent of the North Cascades. The goo has attracted about 75 unique black bears. So far, no grizzlies.

After all his years traversing the North Cascades, Gaines has yet to see a grizzly bear.

“The likelihood of the [grizzly] bears recovering in the North Cascades on their own is very, very small. In fact it probably isn’t going to happen,” he said.

Grizzlies reproduce slower than most any other mammal in North America, only out slowed by the muskox. Gaines doesn’t expect to see North Cascades grizzlies regularly in his lifetime — or that of his teenage daughter.

Gaines said the characteristics, unique to this specific population, are in danger of disappearing with them. Twenty-five years after he started studying these bears, Gaines said there are probably only a handful left.

“Sometimes I’ve thought maybe what I’m documenting here is a species going extinct in an ecosystem,” Gaines said. “Kind of maybe slipping through our fingers.”

The fate of grizzly bears in the North Cascades may be up to what people in Washington say. People can make online comments on the plan through March 14.