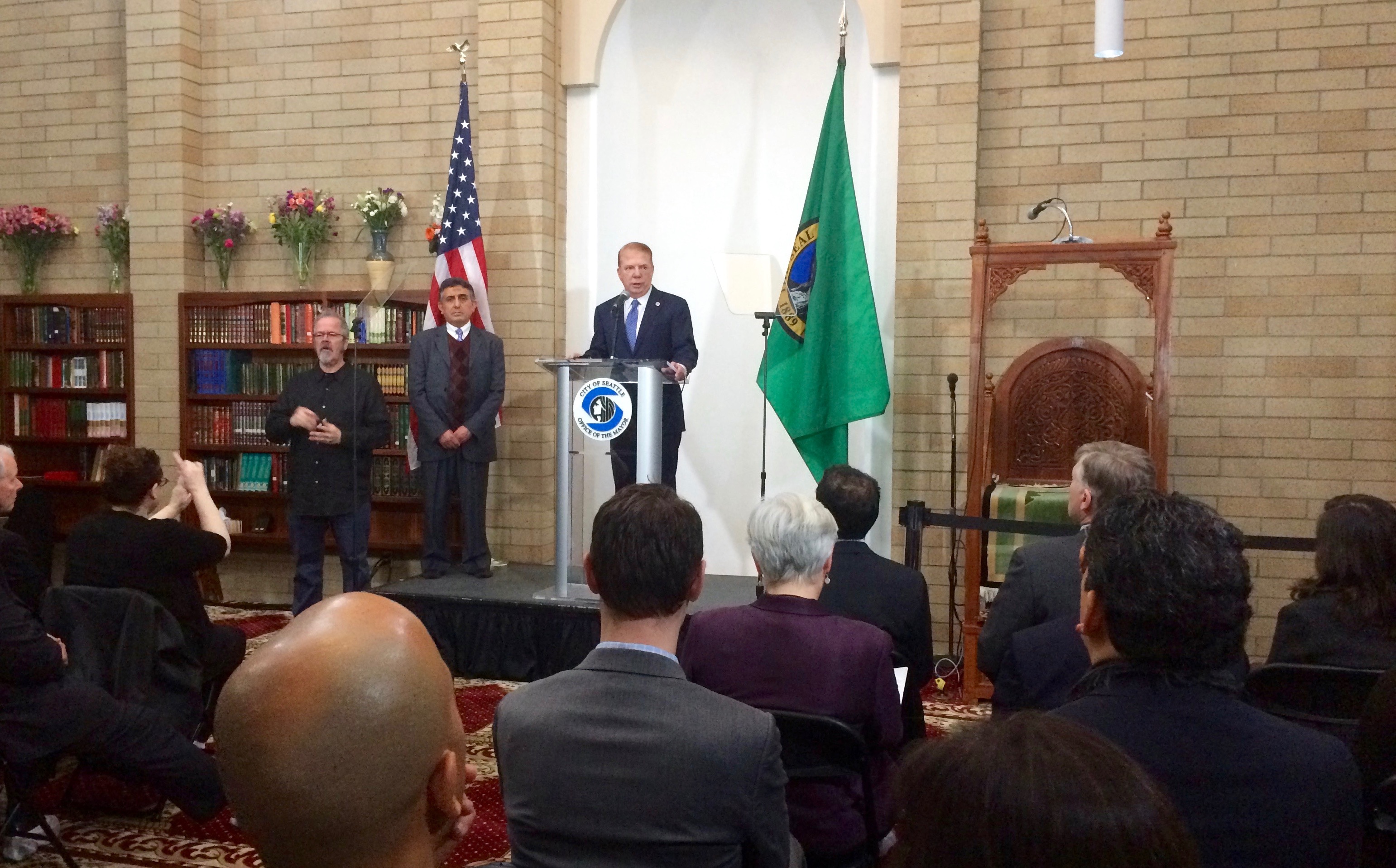 Mayor Ed Murray delivers his State of the City address at the Idriss Mosque.

While taking his annual State of the City address to a north Seattle mosque to make a point about national policy, Mayor Ed Murray said Tuesday that he will propose two new local taxes to fund health and homeless services.

And, in keeping with his long-running rebuke of the new Trump administration, he pledged that he and City Attorney Pete Holmes will file a barrage of public records requests “to determine the administration’s definition of ‘sanctuary cities’ and the enforcement actions the federal government may take against us." He also said they will demand details about the administration’s changes to travel and immigration policy, including to the Obama administration's protections for people brought to this country as children by their parents.

If those requests are not met within 20 days, the City of Seattle will sue the administration. Suing for public records is a common tactic used by journalists and lawyers, including against the Obama administration. But jumping into the legal system has proven to be an effective way to get under Trump’s skin.

State of the City addresses are opportunities for Seattle’s sitting mayor to celebrate what his administration has accomplished and, occasionally, introduce new proposals. This year, perhaps, is more significant for several reasons. For one, it’s the last of the addresses Murray will give before he’s on the ballot next fall for re-election.

But more than that, it’s the first he’s given under a federal government unfriendly to Seattle’s progressive efforts. That it was housed in the Idriss Mosque, replete with metal detectors and FBI surveillance, is of course in direct response to moves already made by the Trump administration. Although other mayors have held the annual speeches outside City Hall, Murray's address at the small and carpeted house of worship in north Seattle, which is among the oldest mosques in the West, was his first to go on the road.

With the Trump administration in office, Murray’s oft-repeated plea to the feds to help with homelessness and affordable housing, among other things, was swapped for resignation that such help would almost certainly not come. In response, Murray is making good on his musing over the last year that he may ask Seattleites to pay more in taxes to combat a homeless crisis he called “dystopian” Tuesday. If all goes as planned, taxpayers will see a ballot measure next August that would bump property taxes, officials said, by $13 a month for a median Seattle house. “This package would raise an additional 55 million dollars per year,” Murray said.

To draft the proposal, Murray has enlisted wealthy entrepreneur Nick Hanauer and Daniel Malone, the executive director of Downtown Emergency Services Center, along with Councilmembers Debora Juarez and Sally Bagshaw, to head up an advisory council to deliver the package to him within 14 days.

Paired with this new proposal came an ask of the business community to put up $25 million to help with homelessness. The request is perhaps inspired by a recent visit from San Francisco Mayor Ed Lee, who spoke publicly about his city’s massive budget to combat homelessness, funded in part by local tech millionaires and billionaires. At an event at Seattle University with the two mayors, Murray was noticeably envious of the privately funded support in the Bay Area.

The second of Murray’s two new tax proposals, while not as large, has the potential to kick up more dust than a standard property tax levy: a 2 cent per ounce tax on sugary sodas to raise an estimated $16 million a year. Limited by what a city can tax (new taxes or fees generally must be shown to be addressing some related problem), the new revenue would be used to “fund programs important to the health and success of so many of our underserved students of color.”

Murray was careful to point to other jurisdictions, like Boulder, San Francisco, Philadelphia and Oakland, that have levied similar taxes to fund youth and health programs.

But the proposal is not without its controversy. Setting aside whether or not it leads to healthier populations, skeptics have argued that the sugar tax measures disproportionately affect the poor.

There is a glaring awkwardness in Seattle, however: As Seattle brands itself as a “welcoming city,” as the model for a progressive future, many of the populations it’s promising to protect — including immigrants and refugees — cannot afford to live here. Every one of Murray’s yearly addresses has addressed this gap. With his celebration of Seattle’s successes — its massive job and wage growth, for instance — inevitably comes a large dose of hedging. As communities of color are pushed from the city’s limits, few can look at Seattle’s growth and development as occurring equitably.

While rhetoric of protecting the rights of immigrants and refugees goes over well in Seattle, Murray’s primary solution to this inequity — relaxing zoning rules to allow for more development — has proven a tougher sell, especially among single-family homeowners. In the face of public pressure, Murray already backpedaled on one such proposal that would have allowed more duplexes and triplexes in single-family zones. But he has maintained his support for other changes, especially in dedicated “urban villages.” And the City Council is about to rezone the University District to allow for more residents.

“We cannot be a city where people protest the exclusionary agenda coming from Washington, D.C., while at the same time keeping a zoning code in place that does not allow us to build the affordable housing we need,” he said, pointing to a recent affordable housing lottery for 108 units that drew over 2,000 applications. “The choice to live in Seattle should not be decided by a lottery,” he said.

Murray’s 2017 State of the City was an exercise in balancing the new realities of a Trump administration with the desire to move the needle on hyperlocal issues. In contrast to the Obama administration, which was at worst absent and at best supportive, the Trump administration makes it impossible for the leftist city hall to avoid looking over its shoulder, at every step.

Correction: A previous version of this article said the proposed property tax would cost $13 a year for a median Seattle house. It has been updated to reflect $13 per month.