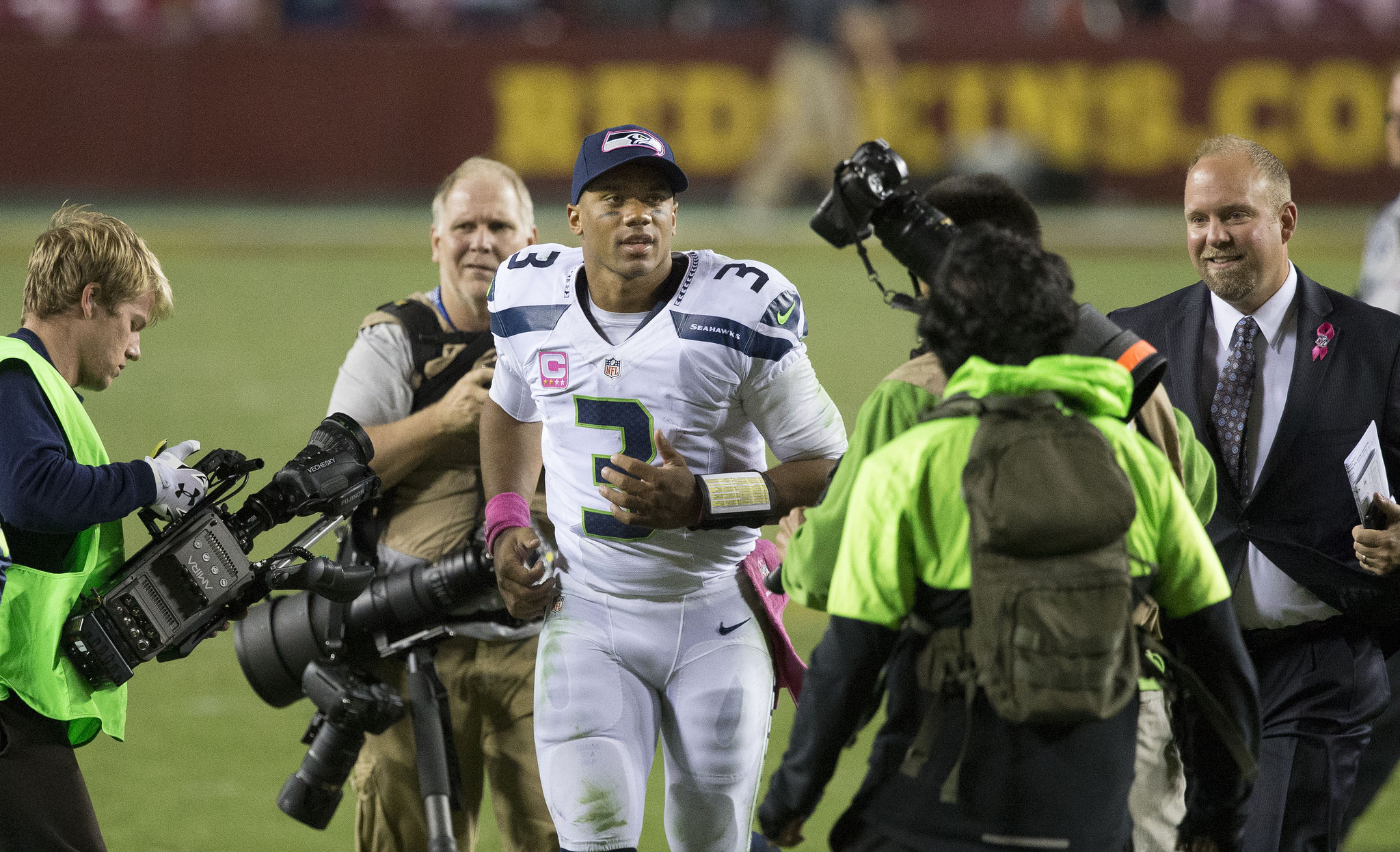 Russell Wilson leaves the field after a 2014 Seattle Seahawks game.

Seattle Seahawks quarterback Russell Wilson has long been criticized for saying little of substance. His press conferences are filled with platitudes. He looks great and sounds good while saying little. A 710 ESPN sports talk host, Danny O’Neil, said that Wilson’s comments generally are best characterized as being “as controversial as the color beige.”

But in the era of Trump, no political comment, however bland, won’t be scrutinized and possibly condemned, even if it enters the realm of fake news or opinion. Wilson is learning that as comments he made questioning Donald Trump’s leadership have been characterized by a prominent right-wing website as a “veiled threat” against the president.

Here’s what happened. Last week, on Facebook Live, Wilson spoke out about politics in a way that surprised people. His comments were spread widely not just on sports sites, but political ones. Wilson actually said something that wasn’t “beige.”

Wilson has made favorable comments about Barack Obama in the past, but now he was being critical of Donald Trump. Wilson said that he’d voted for Hillary Clinton, but that no matter who you voted for, you should be concerned about the new president’s recent actions and the “negativity” it has generated:

“This thing is getting out of hand, people. … It’s only been what, two weeks? Or even less than that? … It’s already too much, already affecting people’s hearts and souls and lives, in such a negative way in my opinion. You go to LAX airport and there’s people all over the place fighting for their lives and protesting and all of that. … All the protests that have gone on through African-American communities, and Muslim communities too.

“I don’t even know if [Trump’s] going to be able to last four years, in my opinion. … You don’t want to wish bad upon anybody, because if he doesn’t last four years that means something went wrong. So hopefully nothing goes wrong anymore than it’s already doing.”

In other words, Wilson thinks Trump’s off to a bad start (so do a majority of the American people) and hopes it doesn’t get worse. He explicitly says he doesn’t wish ill upon the president. That’s apparently near treason-talk to some.

On Breitbart, the influential far, far right incubator of people like presidential strategist Steve Bannon and provocateur Milos Yiannopoulos, a writer took the comment about Trump maybe not lasting four years as a “veiled threat” of violence against the president, ignoring the “hopefully nothing goes wrong part” part of the statement. Talk about fake news. As to Trump’s not making it a full term, there are many possibilities other than violence, including resignation, impeachment, ill health, a mental breakdown — or seeking asylum in Russia.

Some sports radio fans were not happy with Wilson wading into politics. For many, sports should be a haven from such woes. Some say religion and politics shouldn’t be discussed in sports. Too late. That barn door opened many years ago. I remember when teams did not form prayer circles on the field, or did not, as Wilson does, tweet biblical scripture on an almost daily basis. This is now routine, and no one seems to care if it offends secular or non-Christian fans. And sports, NFL football, in particular, has always been a stand-in for war and a field of dreams for patriotic fervor where, especially since 9/11, game ceremonies have become more militarized and more intense.

Now we’re hearing other voices — Colin Kaepernick kneeling during the national anthem, or players offering critiques of society and racial attitudes. The Seahawks players are especially engaged in the world outside the locker room, like Michael Bennett, Richard Sherman and Doug Baldwin speaking about race, police violence, politics, Black Lives Matter, and the NFL’s treatment of players. And why not? Players are human. They shouldn’t be required to talk religion or politics, but if they want to, it's great for fans who want to know about them in three dimensions. Plus, in the age of social media, you can’t stop it from happening even if you wanted to.

Steve Largent, the heroic wide receiver of the early Seattle Seahawks years, turned out to be a far-right politician after football, and he was elected to Congress from Oklahoma. While I didn’t like Largent’s politics, it in no way impacted my respect for what he did on the field. If I had been aware of his politics during his playing years, I think I would have felt the same way. On the other hand, the fact that quarterback Tom Brady, coach Bill Belichick and the New England Patriot’s team owner Robert Kraft, are pals with Donald Trump, puts an exclamation point on my pre-existing dislike of the Patriots. It doesn’t, however, prevent me from acknowledging their considerable football talents.

Athletes being aware and active citizens is a good thing. We’re always hoping sports figures will model good behavior. Heaven knows, so many model the opposite. And if I agree or disagree with their views, so what? We’re a big country, it takes all kinds. Our sports loves and sports hates are often a complicated brew anyway. There are some sports figures I don’t like simply because of their facial expressions. I always enjoyed Brian Bosworth’s calling John Elway “Mr. Ed” because the Denver quarterback seemed like a horse-faced frat boy. Petty, I admit. But sports fandom is an OK place for petty.

We should all be congratulating Wilson for saying what’s really on his mind instead of sticking to the boring quarterback script. As he matures and gets more secure and confident, I hope we’ll hear more from him. If he lets Breitbart or fan disapproval or old-school sports norms shut him up, well, that’ll tell us something, too. If he makes us cringe from time to time, that’s progress.