With land sparse in Puget Sound, a huge win for farmers 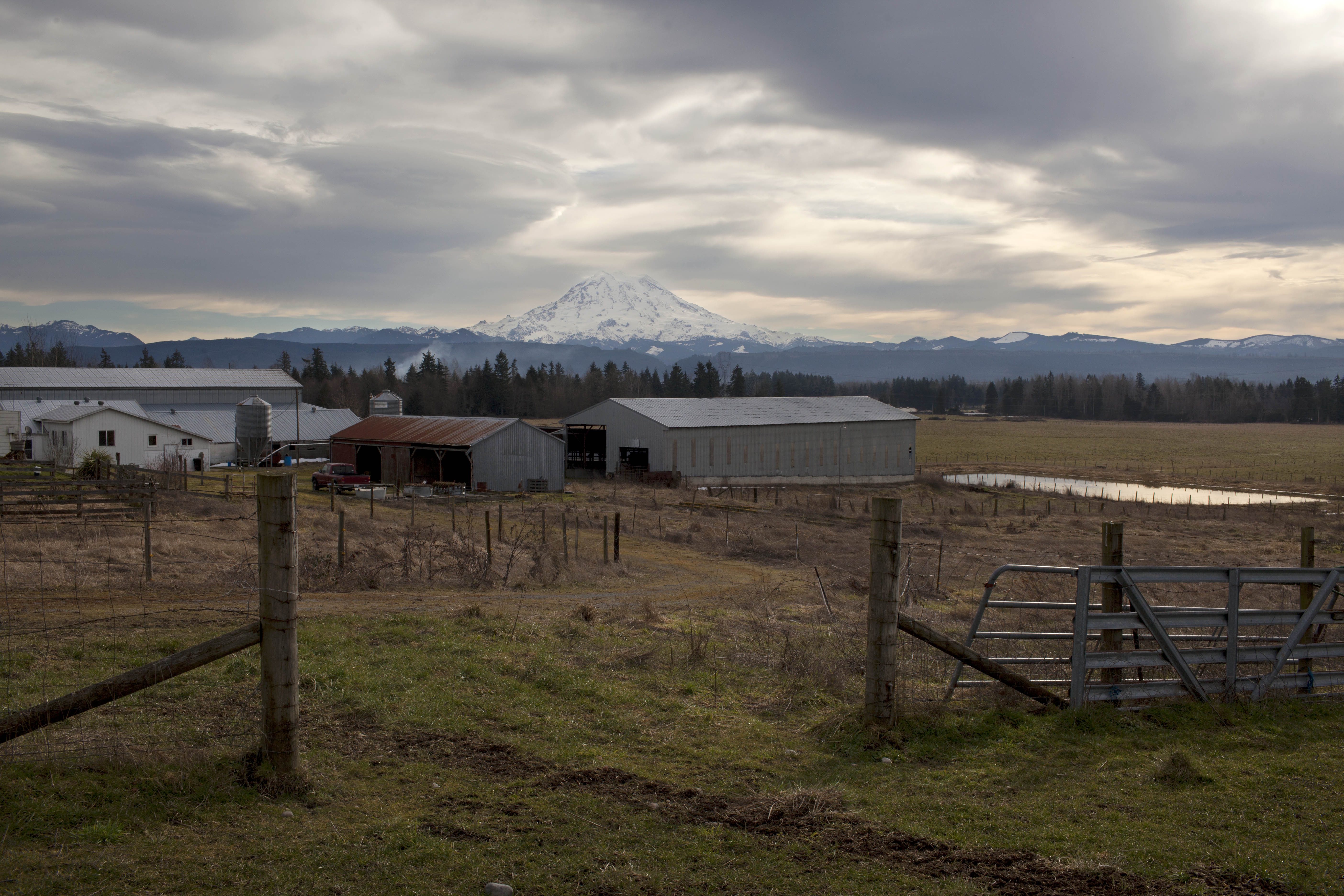 A view of Mountain View Dairy farm near Graham, Washington.

Call it a breakfast of champions for the bovine class: fermented grass silage, alfalfa, grain, soybeans, minerals and probiotics to maintain health. At this Puget Sound organic dairy, a breakfast like this goes with the territory, especially one intent on expansion. On a cold winter day, the breath of purebred Jerseys, Holstein-Friesians and crossbreeds offers warm comfort.

Ryan Mensonides walks the expanse of an open-air barn surveying the herd. A fifth generation farmer, he's the first to go organic. “Technically,” he clarifies: His great, great-grandfather didn't use hormones and antibiotics or put chemicals on the land, but that was before organic became a source of pride and good revenue.

Soon, with help from a land trust, the dairy will receive an unusual leg up, the opportunity to purchase 284 additional acres of prize farmland near Graham, some of the best remaining in central Puget Sound. Here they'll grow their own organic feed, acquire pasture for a growing herd, and if all goes well, market a specialty line of organic cheese, eggs and beef. Fifty of the 284 acres will remain as forest for wildlife habitat and carbon capture.

Mensonides isn't entirely sure how the expansion will play out. The use of 40 percent of the land has been mapped out: “The rest we'll figure out as we go.” But there's no questioning his relief that 284 acres of prime farmland will be farmed instead of developed into 59 estate homes, as was initially slated. A 30-minute drive from his existing farm near Enumclaw, the property boasts a panoramic vista of Mount Rainier and a name he hopes will live for generations: Mountain View Dairy. He knew the farmer who used to farm the property and knew it was up for sale. He also knew he couldn't afford the asking price, a cool $2.8 million.

That is where PCC Farmland Trust comes in. Founded in 1999 by PCC Natural Markets, the trust works to secure, protect and steward farmland in Washington, in particular chemical-free land with rich soils. To date, the trust has conserved eight farm properties in Pierce County's Puyallup watershed and 18 statewide.

The trust had been eyeing Mountain View Dairy for over a year. No longer actively farmed, it was an obvious candidate for protection says Rebecca Sadinsky, the trust's executive director. “Not only is it suited for large scale organic farming, it has great water resources and great natural resources.”

All that was missing was a farmer, one with acumen and ambition, to grow an organic operation. When Mensonides gave a farm tour of his current farm, aptly named Providence, the trust felt like it could be a match. The feeling was mutual. “This is an incredible opportunity for the Mensonides to expand their business model,” says Sadinsky. “And it's an opportunity for us to make sure there's farming in the future that is both sustainable and food producing.”

As cities expand, the price of acreage increases and valuable farmland either lies fallow or disappears to development. In Pierce County, where the farm lies, more than 70 percent of farmland has been lost. Farm real estate values have increased consistently according to a 2015 report issued by the state Office of Farmland Preservation. Since 2000, the average price per acre of farm real estate has more than doubled, while access to capital for new and beginning farmers continues to be a challenge.

As for how PCC Farmland Trust was able to purchase Mountain View Dairy, it's a unique sleight of hand that only conservation organizations like land trusts and local and state governments can employ. Step one is to purchase a conservation easement. The easement is a voluntary legal agreement by a landowner to ensure that the property is protected for agricultural use. The easement removes the development rights, explains Sadinsky, at least most of them. Next step is to buy the property. In the case of Mountain View, the trust used a new conservation strategy they call, “Buy-Protect-Sell.” The approach allows them to compete with developers and get land quickly off the market when farmers can't.

A combination of philanthropic gifts and a loan from The Conservation Fund, a national foundation, enabled the trust to buy the property. The fact that they knew it was for sale and had a chance of buying it was because the trust had been conserving land in the Puyallup watershed for years. In addition, they'd formed important relationships with developers, who alerted them to the pending sale.

Collaboration followed and the deal was done. The intent will be to sell Mountain View Dairy to the Mensonides family within 10 years – for a million dollars less than the purchase price. That's another thing land trusts can do. When development rights are removed from a property, it decreases the value by as much as 50 percent, says Sadinsky. “Real estate is not configured to support agriculture,” she observes. “It's not considered the highest and best value from a dollars and cents point of view, but it is from a food point of view.”

Saving the Mountain View Dairy is also an environmental enhancement for the people of Pierce County, she says. If you think about watersheds flowing through communities, organic farming is an asset. “If Mountain View had become 59 estate homes, it's not just that we would have lost the farming community," she says. The land would also have largely been covered by homes and roads, creating water runoff problems.

The trust's action also supports a farmer who is interested in breeding cattle to make better use of the pasture. “We've had hundreds of years of breeding in the industry and we've essentially bred cows to eat more grain and less grass,” Mensonides says. His goal is to breed back genetics that allow cows to eat more grass naturally. The Holstein-Friesian Jersey crosses he's been experimenting with do just that. “It's like cows used to be,” says Mensonides. Referring to beneficial omega fatty acids, he adds, “Then we can get the mega 3's and mega 6's that we promise you in our milk.”

Ryan Mensonides has his hands full on the farm with 30 young stock crying to be fed. Decked out in warm jackets, they bay for their turn. Oversize bottles are the trick. A farm worker does his best to feed five simultaneously. In another barn, a healthy 10-year-old Jersey is about to calve. It's her fifth. She seems unfazed. “She's probably going to pop it out in the next five or 10 minutes or so,” he says.

Mensonides goes to her side. He weighs the situation and comes back with a harness to help pull. Five minutes later, a healthy newborn Jersey calf is welcomed into the world.

Mid-afternoon settles on the chilled landscape. Most of the chores at the existing dairy farm in Enumclaw have been done. The Mensonides family — including Ryan's wife Haylee and four youngsters — are eager to show off Mountain View Dairy. When we arrive, a raptor emerges from acres of forest cover.  And Mount Rainier — the biggest conservation jewel of all, at least in this part of the world — graces the skyline.

“My wife and I are Christian people,” Ryan Mensonides says. “We're called to be stewards of the land and the animals.” Farming organically “allows you to be more of a steward.”

His turning toward organic actually happened before he decided to start farming. He worked in feed sales and nutrition. One of his customers was an dairy farmer with Organic Valley, the lable Mensonides sells his milk to these days, who taught him to appreciate the value in raising cattle organically.

“You just see it in the animals,” he says. “They seem happier and don't get injured as easily. It's because we're not pushing, we're not trying to get every last drop out of the cow.”