A critical exhibit in this time of Trump 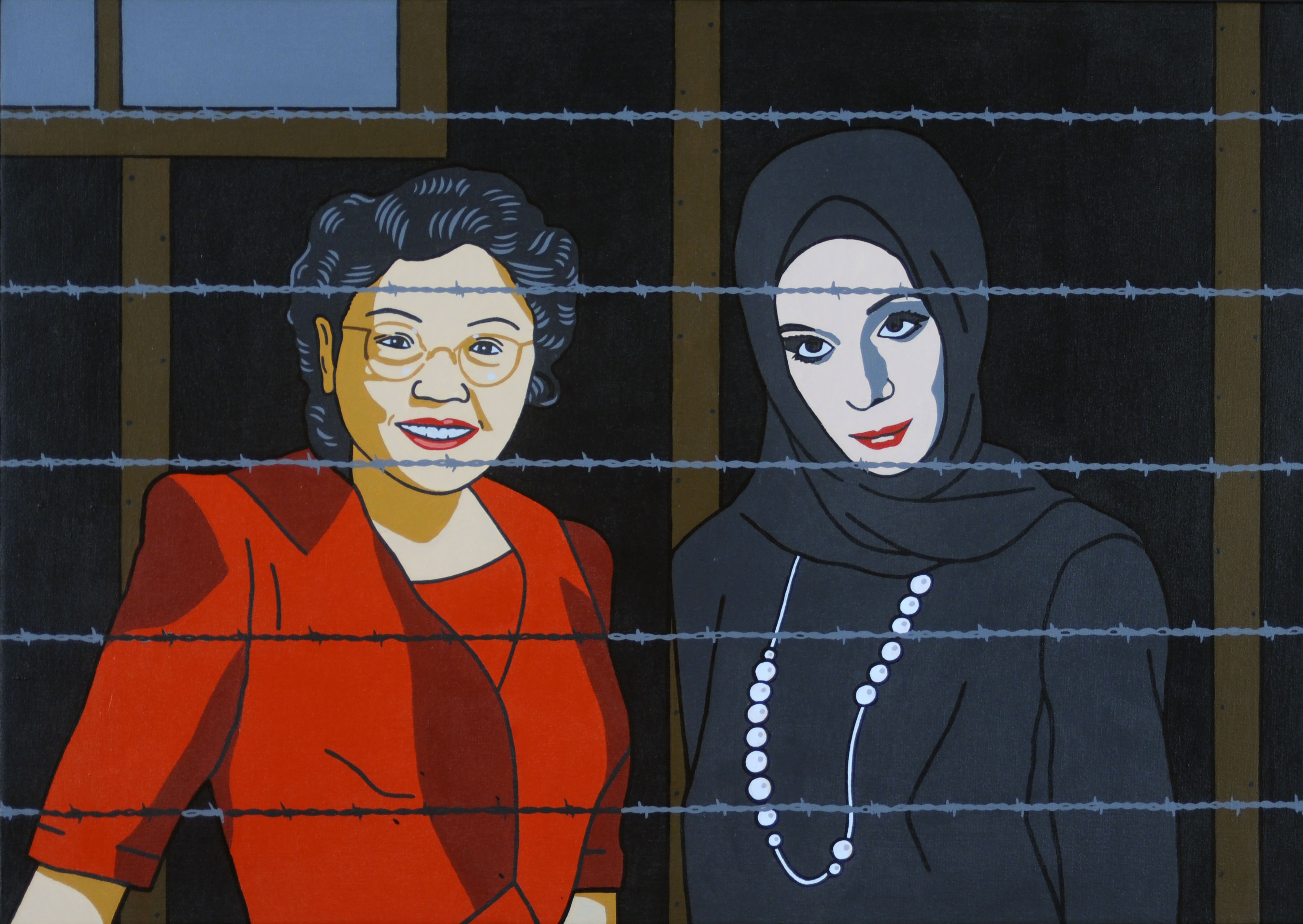 The Year of Remembrance: Glimpses of a Forever Foreigner exhibit opens with a video image of a face — your face. Text below asks the question: What do people think when they see you? American? Foreigner?

That’s the central question of the exhibit, now up at the Wing Luke Museum. The show deals with race, discrimination and human rights through the lens of the Japanese incarceration during World War II and the new world of xenophobia brought forth by Donald Trump. The exhibit, which runs through February, is based on a book of poetry by Lawrence Matsuda with artwork by Roger Shimomura. Both men spent the first few years of their lives in Idaho's Minidoka concentration camp (or War Relocation Center, depending on the preferred terminology).

The exhibit opened last month in commemoration of the 75th anniversary of Executive Order 9066, which President Roosevelt signed after Pearl Harbor and which authorized the forced incarceration of an estimated 110,000 Japanese Americans. Two-thirds of those incarcerated were U.S. citizens.  On March 30, 1942, Japanese Americans were evacuated from Bainbridge Island, the first group in the nation to be expelled.

Year of Remembrance was always planned with the 75th anniversary in mind. But then Trump’s election and his politics “made it even more critical,” said Michelle Kumata, Exhibit Director at the Wing Luke.

Matsuda and Shimomura had only known each other for a few years before working together on the Glimpses of a Forever Foreigner book but they shared a lot in common. Matsuda, the poet, was born in the Minidoka camp, while Shimomura, the artist, spent his third birthday there. Both men grew up in Seattle and studied at the University of Washington. They’ve built artistic careers strongly shaped by the experiences of their families and other Japanese Americans incarcerated during World War II.

About this period in history, Matsuda said in a recent interview in Seattle: “One day you were walking around town, you had dignity, you had a job, and then a week later you and all your relatives were in jail in Idaho or somewhere. And you lost your dignity, you had no job, you were totally humiliated and you were surrounded by 7 or 8 thousand people going through various stages of grief, loss, anger, denial, all of that for three years.”

And while decades have passed since the incarceration, Shimomura said that feeling of being pegged as “An Other” persists even today.

“You’re forever the foreigner,” said Shimomura, reached by phone in Lawrence, Kansas where he has lived since 1969. His mother was born in Idaho and his father was born in Seattle, and neither ever visited Japan. And yet, “We’re so used to being asked, ‘Where are you from?’ I’ve been asked that hundreds of times since I’ve been in Kansas.”

Shimomura’s paintings and prints often combine pop art with traditional Japanese images to create works that explore racism and injustice. Their tone is as sharp as barbed wire. Matsuda writes poetry with short lines and stanzas that capture the emotions of those who were incarcerated.

The museum exhibit pairs artwork with poetry. There’s a Shimomura painting of a child riding a tricycle in front of a barbed wire fence and this line by Matsuda accompanies it: Our American eyes, aslant like Kamikaze, blink in disbelief as barbed wire encircles and machine guns take aim.

One wall is plastered with reproductions of newspaper clippings that document the incarceration. On the opposite wall are headlines about Trump’s threats of mass deportations, rising hate crimes and the moment when, on national television, a Trump surrogate suggested Japanese incarceration could be a precedent for a Muslim registry.

It’s important to remember that an executive order brought about both Japanese incarceration and today’s proposed ban on travelers from seven mostly Muslim countries, Matsuda pointed out. Though he has only “borrowed memories” of life in Minidoka, he remembers the climate of anxiety in the period after incarceration.

“After the war, there was a sense that we could be taken again. There’s that fear,” he says. “You look at the children of Mexican immigrants now, or Muslim kids and how they feel, and there’s that same sense of, do we belong here? What’s going to happen to us?”

One of the messages of the exhibit, explained museum specialist Kumata, is “Let it not happen again.”

“A lot of people have seen the photos or have read about the history, but this makes it a lot more personal coming from Larry’s perspective, his family’s perspective, and Roger’s experiences,” she said.

On a metal link fence placed in the center of the exhibit, visitors are invited to write their thoughts on paper tags that are similar to the identification tags worn by those who were incarcerated. Some of the tags read:

From religion, skin color, gender + sexual identities, and political view - the ease which we can step into “us” vs. “them” is disheartening and devastating.

The time before EO 9066 and our time currently sound the same.

Matsuda said he’s often asked why he can’t “get over” the Japanese incarceration. “My answer is, God I wish I could. I wish I could be like a regular person and not have to worry about this or have this stuff plague you. But I won’t because I don’t want it to happen again. Because that’s our legacy. Because it happened to us first.”