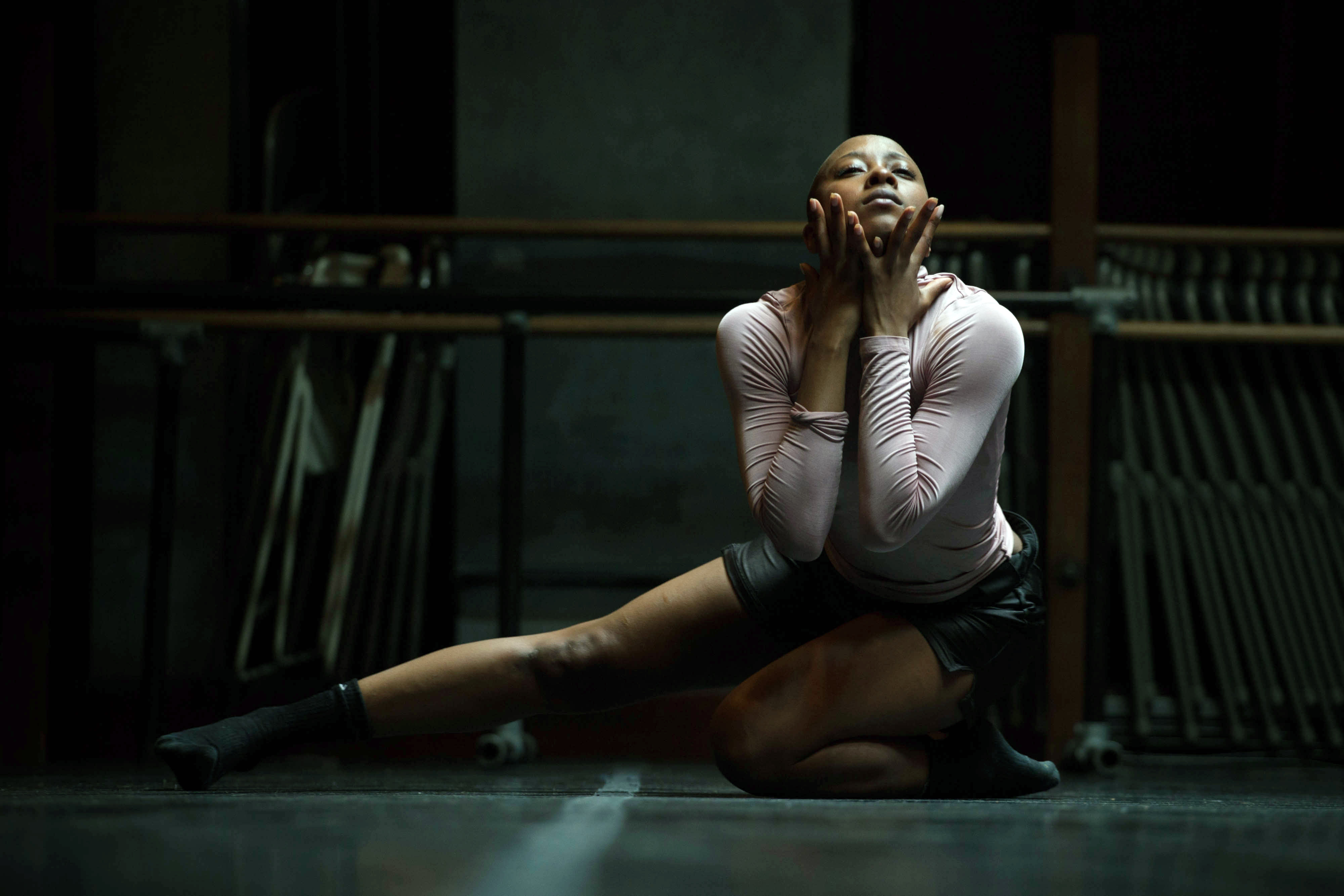 Jade Solomon Curtis rehearses Black Like Me: An Exploration of the Word Nigger at Spectrum Dance Theatre in Seattle.
(All photos ©Matt Mills McKnight/Cascade Public Media)

Editor’s note: This story contains explicit language throughout. The story is about an art piece that looks at the N word, one of the most explicit, racially-charged words in our culture. We’ve decided to honor the artist’s voice by not modifying the title of her piece, changing her quotes or using the euphemism in the body of the story.

It makes sense that an art piece about the word nigger would be unleashed by a dancer. Dance demands that you look at the body, an often barely covered body. Dance insists that you see skin, lots of skin on muscled limbs that push through space.

A new show called Black Like Me: An Exploration of the Word Nigger debuts in Seattle later this week at Fred Wildlife Refuge. Its creator and performer is Jade Solomon Curtis, a 30-year-old dancer who is black and whose shaved head makes her even more striking.

Dance, Curtis explains at a recent rehearsal, is language. “It’s how I can best communicate what I’m feeling,” she says.  Those feelings include audacity, grief, anger, resignation, vulnerability. At least that’s what comes across in her moves.

She’s in a second-floor studio dressed in black shorts and a salmon-colored turtleneck. She switches between dancing in black socks and black tennis shoes. Her soundtrack is trap, opera, spoken word. She palms her face as if in pain. She grasps her wrists as if shackled. She holds two fingers up as if firing a gun. She also twerks, twitches, struts and lifts and extends one leg over her head in the highest of arabesques. When she simply executes something more mundane — say, a simple walk across the floor — even the most resolute “Nah, I’m not that into dance” person would find it hard not to want to watch what she has to say.

“People aren’t afraid to use the word, to direct it at me, so I shouldn’t be afraid to explore it,” she says.

Curtis grew up in predominantly black neighborhoods in Jacksonville, Florida, and Lubbock, Texas. Her mother forbade her from listening to hip hop that included the word, so no Lil Wayne, Juvenile or Master P.

Her siblings used it: What’s up nigga? (That’s the word with an ‘a’ versus an ‘e-r’ and whether there’s an actual difference between both words is something Curtis talks more about below).

Nigger was never hurled at her all those years when she was in the South. But that changed in one day in 2011, when she had already moved to Seattle. It was around 11 p.m. She was on Capitol Hill, walking with another female dancer who is also black.

“I thought ‘What the f---?’ I was living in the neighborhood at the time and I was just taken aback. Isn’t this progressive, liberal Seattle?”

Curtis danced for four seasons with Spectrum Dance Theatre, performing in this same Madrona dance studio where she’s rehearsing now. The classically trained dancer used to want to make dance that was "ethereal,” she says. But it was Spectrum’s Donald Byrd who showed her how dance could be “current and socially relevant. He does it unapologetically and fiercely and you have to be like that in order to work with him.”

So when it came time for Curtis to set out on her own, to launch her Solo Magic nonprofit and unveil its very first shows, the choreographer-dance artist knew the work would be political.

“Activism is the muse,” she says.

The idea for Black Like Me arrived pretty quickly, an idea that was constantly being reinforced by news stories of African Americans being shot by the police or mistaken for not being who they actually are.

“Henry Louis Gates. Remember how he was arrested?” she asks. In 2009, the Harvard University professor, author and PBS TV host was arrested outside his Cambridge, Massachusetts house after a neighbor reported someone was breaking in.

“No matter how accomplished I get, no matter how presentable I dress, I’m still viewed as a nigger,” Curtis says. “I still get the hoodie thrown on me because of the color of my skin.”

Black Like Me will feature five different solos — solos not because Curtis wanted the shows to be all about her but because she didn’t have the budget to pay other dancers. She’ll embody a different character in each piece — slave, hoodie-wearing youth, seductress — in order to show how the word, a word coined by whites, has been used throughout history.

“People believe the word has been reclaimed. That it’s been transformed. That there’s a difference between nigger, nigga, niggah,” Curtis says. But no, she insists, there is not. No matter how it’s used, whether it’s in friendship or in hatred, whether among African Americans or in some music lyric, she argues the word is always derogatory.

“I cannot disregard my ancestry and my history,” she says. “The word has too much pain.”

And then in an empty studio, with some barely-there sunshine streaming in through a skylight, Curtis fires up the 1973 Boris Gardiner song, “Every Nigger is a Star,” a soulful song re-introduced to a whole new generation because it’s been sampled by Kendrick Lamar. And she dances. Body, mind, soul and bloodline.