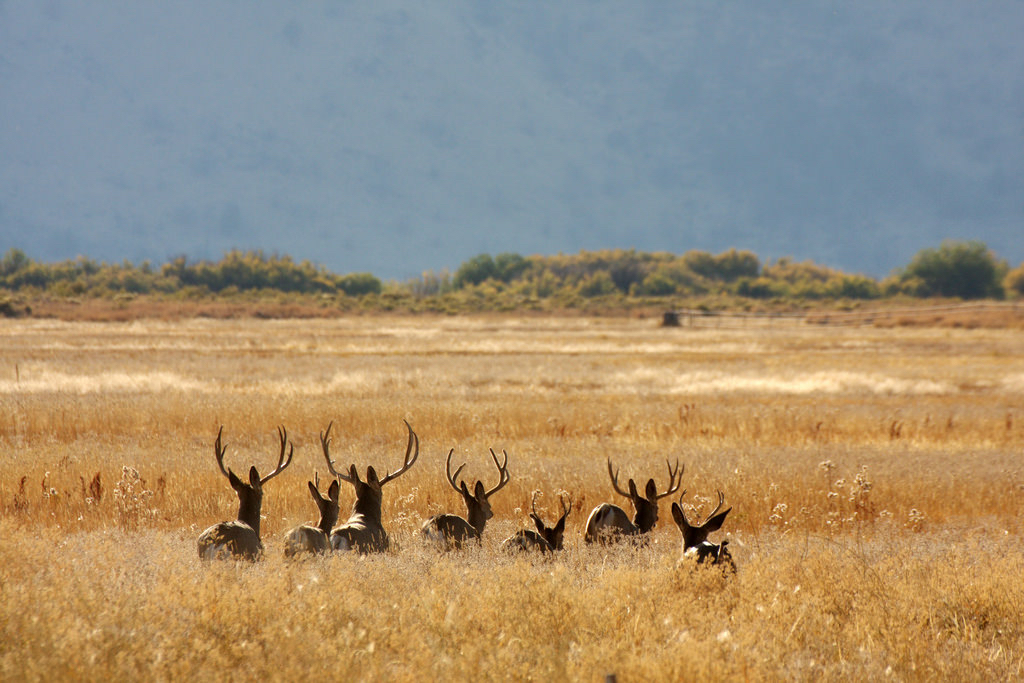 Alice Elshoff first saw Malheur National Wildlife Refuge in 1959. The 82-year-old, who lives in nearby Bend, Oregon, still goes there “whenever I can get away,” to bird-watch and volunteer. But last spring, on her first visit after the January 2016 occupation by armed anti-federal militants, everything felt surreal, she says: She had to notify refuge staff in advance and stop at the gate for an identification check by armed U.S. Fish and Wildlife Service employees. There were no other visitors and few employees, so it was unusually quiet. Elshoff, vice chair of the board for the Friends of Malheur National Wildlife Refuge, and a team of volunteers had come to reseed native grasses destroyed when militiamen bulldozed a new road. “It felt good to be there,” she says, working in the place where the Bundy brothers and their supporters did so much damage. “[We were] trying to make things real again. To undo the bad that had been done.”

A year after the occupation, most of Malheur’s 188,000 acres are open to the public again, but the headquarters, museum and visitor center remain closed as the U.S. Fish and Wildlife Service, which oversees the National Wildlife Refuge System, improves security to the buildings and gates. The agency has already spent $4.3 million repairing damaged buildings, rebuilding kicked-in walls, and cleaning up trash and backed-up toilets. That’s on top of the roughly $2 million it spent during the takeover placing temporary law enforcement officers at understaffed refuges across the West to help avoid more militia-type occupations. The agency hopes to have the Malheur headquarters open again by early spring, when the Ross’ geese and sandhill cranes arrive.

The cost of the 41-day occupation has only added to the financial burden on a system that has seen repeated budget cuts and staff reductions. Half the refuges in the U.S. lack their own managers, an increase from 2007 when a third of them lacked managers. Law enforcement employees are at an all-time low, leaving refuges across the U.S. vulnerable. And an unfriendly Congress isn’t likely to provide relief, especially in light of the federal hiring freeze imposed by President Donald Trump.

“It’s a system that’s under greater and greater stress,” says Jeff Ruch, executive director of Public Employees for Environmental Responsibility (PEER), which released a survey of refuge supervisors assessing agency morale and support. “They have less resources with which to operate, but a bigger job.”

The National Wildlife Refuge System’s 850 million acres provide vital habitat for wildlife, including more than 380 endangered and threatened species. Hunting, fishing and wildlife-watching opportunities draw 48 million visitors annually to sites ranging from the remote wilderness of Alaska’s Arctic National Wildlife Refuge to the arid mountain ranges of Nevada’s Desert National Wildlife Refuge. Under former President Barack Obama, 14 more national wildlife refuges and conservation areas, seven in the West, were created. But as with national parks, funding hasn’t kept pace with the expansion; since 2010, the refuge system’s budget has dropped approximately 20 percent when adjusted for inflation, and 13 percent of the workforce has quit or retired without being replaced.

“It’s a matter of prioritizing,” says Cynthia Martinez, chief of the National Wildlife Refuge System, “and making those hard decisions of what we’re not going to do.” Many visitor centers have had to reduce their hours or even close completely. Staffing cuts mean that, with no one to oversee volunteer projects such as trail maintenance, refuges lose out on services worth an estimated $2 million per year. Invasive species eradication programs have been severely reduced or done away with altogether. Prescribed burns have suffered, too, declining 44 percent in the last five years as the agency spends ever more on fighting wildfires.

Funding cuts also lead to a rise in “complexing”: the practice of consolidating staffing and equipment for multiple refuges. Not all refuges need a full management staff, but complexing has been used more frequently as budgets and staffing have fallen from the high point of 2010. In PEER’s January survey of national wildlife refuge managers, 94 percent do not have enough staff to “meet the core conservation mission” of their refuges. That means problems take longer to be addressed, important projects go undone, and deferring them gets more and more costly. As a whole, the system has a $2.7 billion maintenance backlog.

Fish and Wildlife has always had a shoestring budget, says David Houghton, president of the National Wildlife Refuge Association, and is now seeing a “perfect storm” of funding problems; the National Wildlife Refuge System is just one of many programs in need. In November, the agency released draft plans for reorganizing the refuge system in eight states, including Colorado, Montana and Wyoming, to reduce staff numbers and decrease the amount of land that’s actively managed. “You’re not just cutting out the muscle, or the fat,” Houghton says, “but you’re deep into the marrow of the agency and it has had profound operational issues.”

The agency’s budget woes and reduced staffing have impacted refuges all over the West. At the Charles M. Russell National Wildlife Refuge Complex, which encompasses six different refuges totaling 1.1 million acres in central Montana, there are now 19 employees, down from 28 in 2010. That means even necessary projects at the second-largest refuge in the Lower 48 get postponed. Staffers can no longer control some common invasive plants on the refuge like Canadian thistle; they’ve stopped mule deer and elk population surveys and reduced the number of prescribed fires that keep trees from encroaching on plains where ground-nesting birds live. Instead, they spend much of their time maintaining an 800-mile network of roads and other projects for visitor safety and to keep basic operations running.

The remaining employees are overloaded and work longer hours, says manager Paul Santavy, mentioning a wildlife biologist who spent 150 days studying black-footed ferrets, occasionally alone in a remote camp. “I sing the praises of all my colleagues for their dedication, but the cost of that is they’re always fighting burnout,” Santavy says. “They’re always on the edge of having had enough.”

The Cooperative Alliance for Refuge Enhancement, a national coalition, has reported many examples of problems caused by cutbacks. In Senate testimony from 2016, CARE documented how budget cuts affected outreach to rural communities in Alaska. The Innoko, Nowitna and Koyukuk national wildlife refuges were complexed, and the staff was cut, leaving just one outreach staffer who is now struggling to maintain connections and communication with locals.

In New Mexico’s Bosque National Wildlife Refuge, employees have fought to eradicate invasive tamarisk for two decades. But reduced funding for the project has allowed tamarisk to return to areas where it was previously eliminated to prevent it sucking up vital water from refuge waterways.

Before the January takeover, Malheur had 16 employees, but five left afterward, and replacements have yet to be hired. Compare that to the 1990s, when 37 people worked at the refuge. During the occupation, all staffers had to stay away, which meant that an annual project to remove invasive carp, which harm water quality, couldn’t occur. Other long-term efforts suffered as well. Chad Karges, the refuge’s project leader, had been working with ranchers, tribes, environmentalists and community members for years, one-on-one and through partnerships. That work played a role in the outcome of the occupation; not many locals flocked to the occupiers’ cause. Such efforts, including the High Desert Partnership, have resumed post-occupation and are vital for all refuges in terms of volunteers, public-lands dialogue and support, Houghton says, but often there’s not enough time to do necessary outreach.

While the Malheur occupation was in full swing, Santavy says, “the overwhelming message we were getting from our local communities was that they didn’t have any patience for that kind of stuff. That wasn’t going to happen in their backyard.”

The occupation catapulted Oregon’s Harney County into the spotlight, along with awareness of national wildlife refuges. This year, the Harney County Bird Festival sold out faster than ever before, out-of-town visitors to the refuge have increased and the Friends of Malheur National Wildlife Refuge has grown from approximately 100 to 2,000 members, mostly non-locals.

Raising public awareness of national wildlife refuges could be key to helping them recover some funding from crippling budget cuts. Refuges are "not well known, and that’s a problem politically,” says Gary Ivey, president of the Friends of Malheur. Ivey first visited Malheur in 1979, and was dazzled by the hundreds of different bird species that can be seen at the refuge. He worked there as the refuge biologist for 15 years. The out-of-town occupiers’ claims that they were returning the refuge to the people rang painfully untrue to him, Ivey says. “It’s like somebody being in your own house, breaking in and taking it over.”

Now, faced with a Republican Congress that is paving the way to transfer federal land to state control, Ivey, Houghton and others are lobbying for more public support for refuges, to increase their visibility and funding. “Refuges need help,” says Ivey; the Malheur occupation was a sign of that. “We’re ground zero for threats to refuges.”

This past October, Alice Elshoff was working at Malheur again, this time on trail construction, when news came that the first trial of the occupiers had resulted in a not-guilty verdict. A fellow volunteer checked his phone, saying, “You’re kidding — on all counts?” Elshoff describes the verdict as “heartbreaking,” but says she still looks forward to the refuge headquarters reopening in the spring.

Last summer was unusually dry, so she didn’t see her favorite long-legged wading bird, the black-necked stilt, in shallow Malheur Lake. But this year, with such a good snowpack in the Steen Mountains, the runoff may yet fill the lake. “Hopefully, this will be a wonderful spring.”