At the mic: Teens slam injustice with poetry 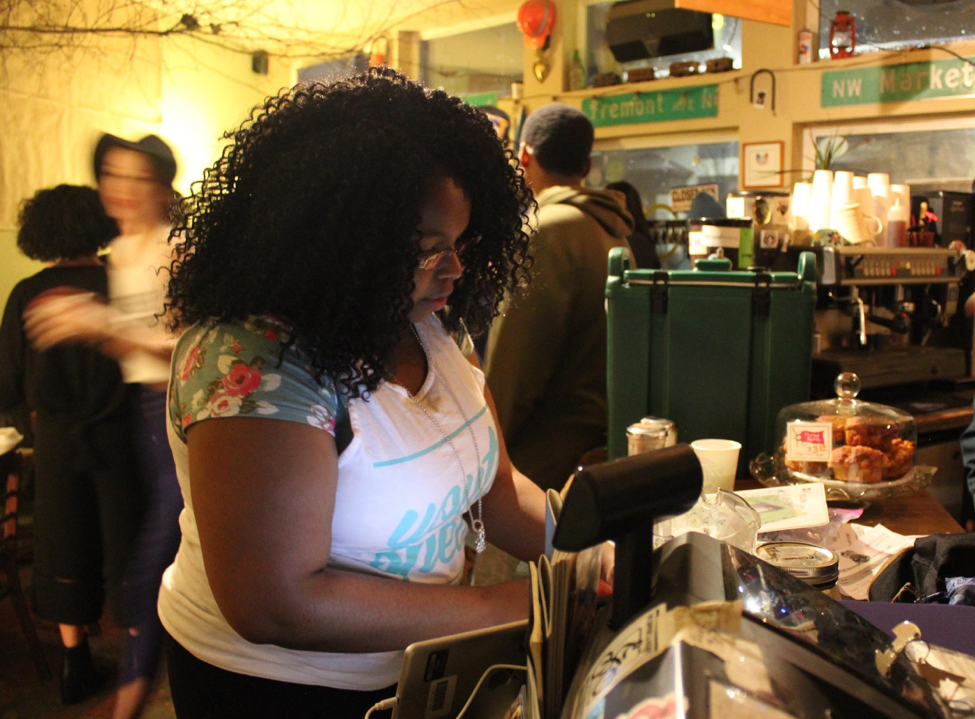 Every first Sunday of the month, a small café in Beacon Hill opens its doors after hours to a group of teenage spoken word poets ready to tackle social justice issues.

These poets share very personal experiences in their work, exploring topics like gender identity, sexuality, racism, and Islamophobia. During spoken word poetry — a type of performance art that involves word play and vocal inflection — the audience participates by snapping their fingers, clapping, and humming when a poet “spits” something especially powerful.

“What draws me to poetry is that it’s really interactive,” said Azura Tyabji, 16, who co-hosted the February open mic night. “When you’re performing, the audience is right there with you.”

The event was organized by Youth Speaks Seattle, a spoken word program run by Arts Corps that teaches a diverse community of teens how to use poetry for social justice. Along with monthly open mic nights, the program includes education on community organizing, writing workshops and a year-long youth leadership program.

“We know those are the voices that are marginalized in the rest of the world,” Handler said.

Carlynn Newhouse, 17, first joined Youth Speaks after a friend suggested she look up a video of spoken word poetry. The first Google result was a video from a Youth Speaks event. Now, four years later, she is one of this year’s spokes.

Newhouse said she hadn’t met many other young black poets before joining Youth Speaks. Even though she was nervous at her first open mic night, the support from the audience made a lasting impression.

“It was the first time I had experienced so much love,” Newhouse said. “Everyone was clapping and snapping during my poem. I got so many hugs afterwards.”

Tyabji said open mics like the ones organized by Youth Speaks give young people opportunities to perform for the first time.

“I think a big block that young artists have is that we think we’re not experienced enough already, or we think we’re not talented or gifted enough to write or perform,” Tyabji said. “That’s really not true. Everyone has the ability to perform and get on stage.”

Ana Walker, 17, another of the spokes, said Youth Speaks was the first place she heard people talking about social justice outside of history classes. She said that even though performing is an important part of the program, building relationships with her peers has been even more meaningful.

“It’s about building community and finding a home away from home,” she said. “Finding a place that’s welcoming to you and a place that you can rely on.”

Handler said Youth Speaks’ focus on leadership gives participants more autonomy than they have at school.

“They get control. They get to say what happens. They get to shape the curriculum,” Handler said. “If they don’t like something, we talk about it. I think that’s very different from the school system.”

Newhouse said the interactive element of slam poetry is missing from most classrooms.

“You go for seven hours a day and people just talk at you, instead of talking with you,” Newhouse said. “You’re not learning from your peers, you’re just learning from the teacher, with one frame of mind.”

She also said poetry has given her an opportunity to express herself without the pressure of following any structural rules.

Walker said she can explore topics like race more openly at Youth Speaks than she can at her predominantly white private school.

“In English class, I’m always watching what I say and how I say it,” Walker said. “There’s either a judgmental reaction or there’s this pity reaction that’s equally uncomfortable. In Youth Speaks I feel a lot more comfortable to just write about whatever I want, say what I want, and know that people who identify like I do are going to hear me.”

Newhouse and Walker both emphasized the accessibility of slam poetry, saying that it allows anyone to write and share messages about current social issues. Walker said this makes it stand out in the history of creative writing.

Tyabji has also performed her poetry at protests and rallies. She said poetry is a great medium for talking about social justice because each word has power.

“In a poem, ideally every line and every stanza has intention and carries a message with it,” Tyabji said. “It’s a way to galvanize people who might be tired of protesting all the time or being weighed down by all these oppressive systems. Art is really uplifting in that regard. I think it keeps people going.”

Handler grew up writing slam poetry in Colorado and attended the same Brave New Voices competition that members of Youth Speaks compete in each year. Handler, who uses they/them pronouns, said that although their poetry dealt with topics like racism, sexism, and homophobia, they were never formally taught about community organizing. Handler described Seattle as being part of a national movement around spoken word poetry and social justice.

“I wasn’t given a definition of power, privilege and oppression as a young person,” Handler said. “We’re writing and we’re connecting it to this larger framework of building a movement and analyzing these systems. That’s something I wish I’d had.”

Newhouse said young people looking to try slam poetry should remember that making an impact on the audience is more important than winning or losing a competition.

“You’re not always going to win, but you’re never going to fail,” Newhouse said. “You went up there and said stuff you’ve never said before in front a crowd of strangers. That was a huge risk, but you changed somebody’s life. I truly believe that every time a poet spits, they impacted at least one person in the crowd who’s going to carry that with them for the rest of their life.”

To hear recordings from the Youth Speaks open mic night, click the icons below.