Seattle's fiercest bike fight is settled — or is it? 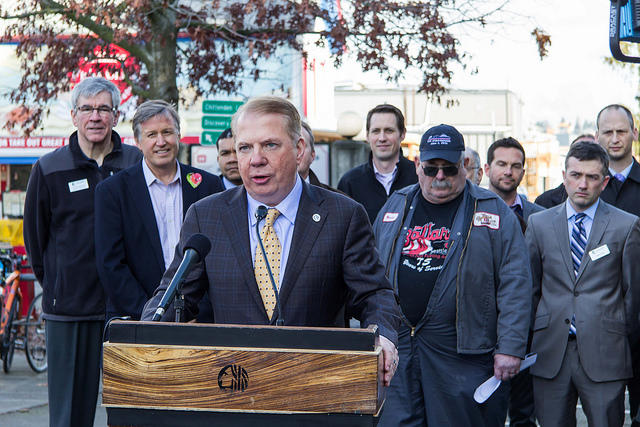 After more than two decades of bickering among bicycle and pedestrian advocates and business interests, Seattle appears to have finally settled on a route for the “missing link” — the controversial final 1.4 miles of the city’s beloved Burke-Gilman Trail. But the fight is not over yet.

At a press conference last Tuesday, Mayor Ed Murray announced that the trail will be completed along Shilshole Avenue South through Ballard. The final environmental impact statement will be published in May, he said, and construction is expected to begin in 2018.

City Councilmember Mike O’Brien said that this route was the result of “a really strong community consensus around how to complete this missing link, how to build this trail in the way that would be safest for everyone.”

But Josh Brower, an attorney with Veris Law Group who has represented several businesses and labor groups opposed to the Shilshole Avenue route, said they have not dropped their lawsuit. Since 1996, business owners have argued that constructing the missing link along their driveways would impact day-to-day operations and increase the risk of collisions between trucks and trail users.

The selected route follows Shilshole Avenue South and Northwest Market Street before connecting to the other end of the trail by the Ballard Locks. Business groups prefer a different route along Leary Avenue.

Kevin Carrabine, founder of the Friends of the Burke-Gilman Trail, said at a press conference in January that many businesses already coexist with the trail and that industrial businesses in other cities have found ways to welcome pedestrians. He cited a concrete company in Vancouver’s Granville Island that holds an annual open house for the local community.

Michael Gonzales, of Teamsters Local 174, said building the missing link in the industrial area of Ballard puts cyclists at risk of collisions with the concrete trucks, delivery trucks, and other large vehicles that are constantly entering and leaving waterfront businesses.

“We just see a real disaster when you mix freight trucks and pedestrians,” Gonzales said. “There’s going to be an accident. It’s just not safe.”

There are also concerns about the cost of the project. According to a 2010 estimate, construction of the 1.5-mile missing link is expected to cost $14 million, including design and construction. At a sustainability and transportation committee meeting last month, representatives of the Seattle Department of Transportation said they hadn’t produced an updated cost estimate since then.

According to page 230 of the city’s Capital Improvement Program, SDOT has budgeted nearly $31 million for the missing link between 2017 and 2022. The Westlake protected bike lane, a 1.2-mile lane that opened in fall 2016, cost just $6.1 million.

Individuals and community groups sent letters to SDOT during the public comment period for the draft environmental impact statement. Two of these groups were the Urban League, which supports African-American and underserved communities, and Centerstone, which serves low-income communities.

“It seems to me that most of the bicycle facilities and infrastructure we are developing is geared toward the north end bicycle rider and not in communities of color,” Banks wrote. “I implore you to look at a less costly alternative in Ballard and to more equitably spend bicycle funds throughout Seattle.”

Mark Mazzola, SDOT’s environmental coordinator, wrote in an email that the missing link project was included in the equity analysis in the 2015 Seattle Bicycle Master Plan. This analysis used factors including age, race and ethnicity, poverty level, and automobile access to assign equity scores to different parts of the city.

“The purpose of the Missing Link project is to complete the last leg of the Burke-Gilman Trail, which serves a large portion of Seattle and the region as a highly used non-motorized transportation and recreational facility for people of all ages, abilities and backgrounds,” he wrote.

“SDOT’s goal is to achieve zero areas lacking bicycle facilities by 2030,” he wrote.

At last week’s press conference, Mayor Murray said, “Because of this agreement, we will now begin design, and about this time next year we will break ground and make this project a reality.”

But once the final environmental impact statement is published, Brower said, industrial groups could be back in court. 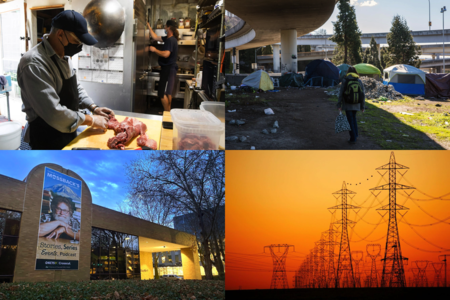 Vote for the story you want Crosscut to investigate in 2022

We've narrowed down a list of reader-submitted story ideas. Which one are you most curious about?