Democracy vouchers: Everything you need to know 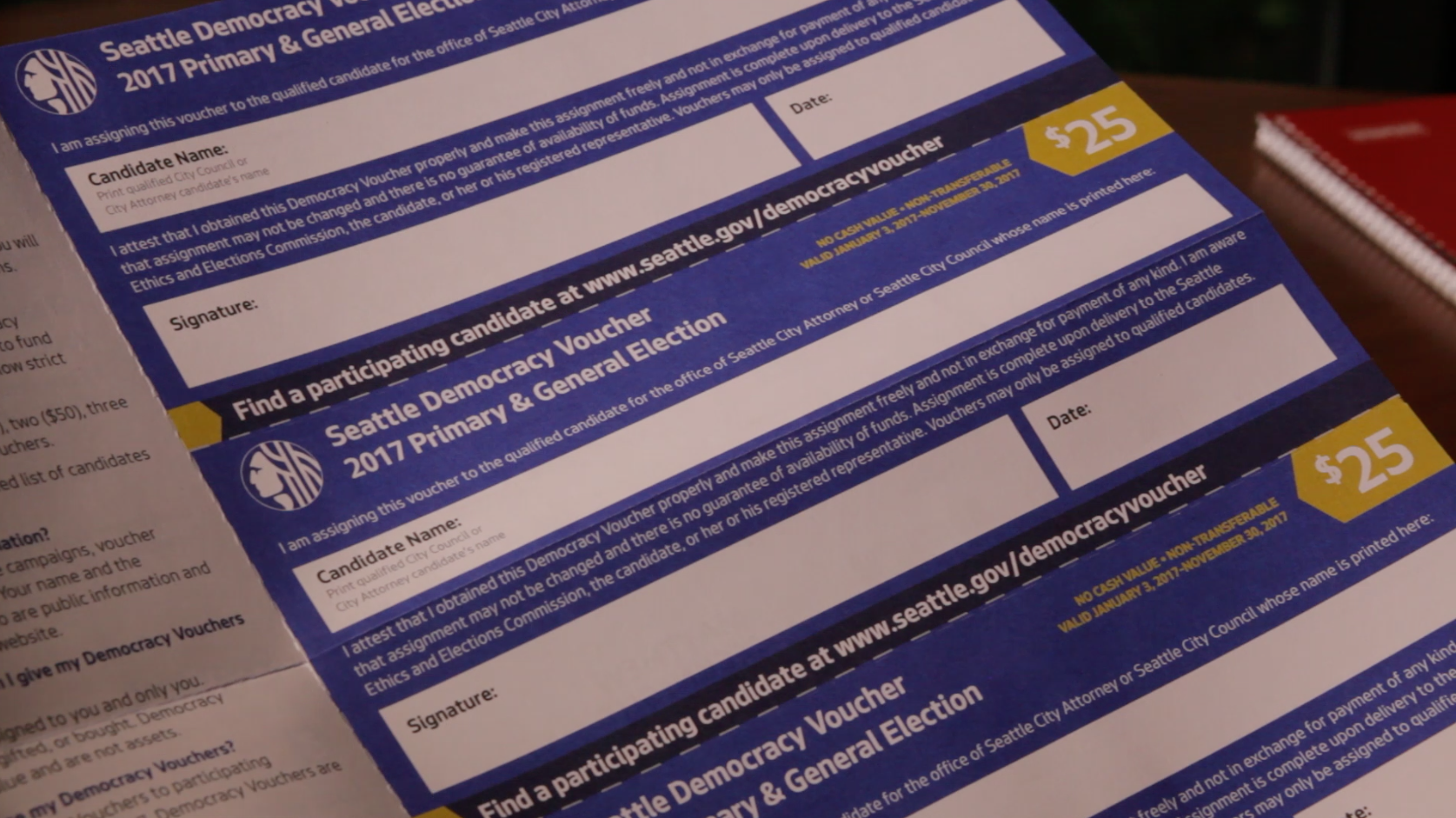 In January, Seattle residents started receiving envelopes in the mail containing $25 certificates known as “democracy vouchers.” The certificates, which resemble Monopoly money, are sent by the Seattle Ethics and Elections Commission (SEEC) and are the key component of Seattle’s campaign finance reform program. In fact, they are central to a remarkable effort to reform the way candidates fund campaigns for local office — one designed to level the playing field for people who may not otherwise be able to afford to run for office.

“This movement is about bringing down barriers,” says Sheley Secrest, a staffer for the King County NAACP who hopes to use vouchers this year in a run for City Council Position 8. “It’s about lifting up voices from those who’ve been told in the past that they don’t belong. This movement is about getting in — all hands in — and really changing the things that we want to see in Seattle.”

Secrest is optimistic about the opportunities the program creates. She believes that democracy vouchers will give her and other neighborhood leaders a way to get into city politics. To a certified candidate, they will be the same as cash, although campaigns can only spend them in a limited numbers of ways.

But not everyone is so upbeat and there has been a lot of confusion surrounding the vouchers. With that in mind, here’s what you should know about democracy vouchers, starting with a nifty video from KCTS 9's Matt Mills McKnight.

Where did they come from?

“Back about 10 years ago, when we first went to the state legislature and sought the authority to put in place a public financing scheme, there was the issue that incumbents were raising significantly more than their challengers,” says Wayne Barnett, executive director of the SEEC. “The theory was that making public financing available could give a challenger an opportunity to mount a credible campaign in a way that they had not yet been able to so.”

That led to a citizen-led initiative known as “Honest Elections Seattle,” or I-122, which passed with 63 percent of the vote in Nov. 2015. It created stricter contribution limits on high-dollar donors and introduced democracy vouchers.

How do they work?

On the first business day of each election year, the SEEC will mail four $25 vouchers to every eligible voter and applicant in the city. Recipients designate a participating Seattle City Council or City Attorney candidate to receive their vouchers, sign, then mail them directly to candidates or the SEEC. After the signatures are confirmed to be legitimate by King County elections, they return to the SEEC, which dispenses money to the candidates. As with all campaign contributions, democracy voucher contributions will be public record.

Some restrictions do apply: Candidates are not allowed to pay people for their vouchers, for example, or make political contributions of their own. In addition, they agree to a total spending cap for the primary and general elections.

City Attorney and City Council district candidates have a spending limit of $150,000. Those running for city at-large council seats, such as Secrest, can spend up to $300,000. Beginning in 2021, mayoral candidates will have a ceiling of $800,000. Those caps can be raised if a competitor who has opted out of the voucher program surpasses a voucher user’s expenditures.

For participating candidates, the maximum amount they can accept from any individual donor (not including democracy vouchers) is $250. Those who choose not to opt in to the program are still limited to a maximum of $500 per individual contributor, but lack an overall spending cap.

Why are they important?

Tammy Morales, who lives in Seattle’s south end and ran for District 2 on the Seattle City Council in 2015, hopes that the vouchers will allow people to become more involved in their local politics.

“I had many conversations with people who said, ‘I’ve lived in this neighborhood, I’ve lived in this house for 30 years. You’re the first candidate to knock on my door,’” she says. “And there’s a problem with that.

“Particularly now, in this unsettling political climate where we really don’t know what’s going to be happening at the federal level, we’re going to be more and more reliant on our local governments to make decisions that affect us every day,” Morales continues.

What are the risks?

Others have expressed concerns about the potential for corruption and the increased property taxes used to fund the program.

One concern is “bundling” — the collection of large numbers of vouchers by organizations or individuals possibly affiliated with candidates.

“There is the matter that state law does bar people from serving as intermediaries for contributions,” explains Barnett. The state’s Public Disclosure Committee (PDC) has concluded that while organizations may not bundle democracy vouchers, individuals are permitted to, even if they are not registered with the SEEC as a candidate’s representative.

Jordan Royer, who ran for City Council Position 8 in 2009, foresees it becoming a significant issue in the future. “If you’re a large organization that has a lot of members who live in the city of Seattle and you have workers who can go out there and go door-to-door and put large voucher parties together, you’re going to do that because it’s an easy way for you to use taxpayer funding to get your position across,” he says.

Royer refers to the financing plan behind the democracy voucher program, a voter-approved property tax increase of $30 million over 10 years, at $3 million per year. The average Seattle homeowner who owns a property worth approximately $500,000 will now pay about $11.50 per year towards the reform. Commercial, business and residential properties are all affected. Any money left over at the end of elections is held for the next year.

Registered Seattle voters were automatically mailed their vouchers after Jan. 3, but anyone who meets the prerequisites can apply to receive their vouchers and redeem them up until Nov. 30, 2017. To be eligible to receive the vouchers, applicants must be residents of the city of Seattle, at least 18 years old and either U.S. citizens, U.S. nationals or lawful permanent residents.

“If a candidate does knock on your door and you can’t find yours, we are trying to make it as easy as possible for you to get a replacement,” emphasizes Barnett. “Right now, we’re just asking people to call us, email us — just reach out to us in any way you can to let us know that you can’t find your vouchers.”

Morales, who is not currently running a campaign, remains hopeful that the democracy vouchers will bring change to the system.

“I think the real goal of this is to strengthen our voices and make sure that we’re holding our [elected officials] accountable to the people whom they want to represent. Not to wealthy donors, not to lobbyists, but to the people they will actually represent.”

“It’s a relationship,” concludes Secrest. “And this voucher program? The very thing of its success is building that relationship.” 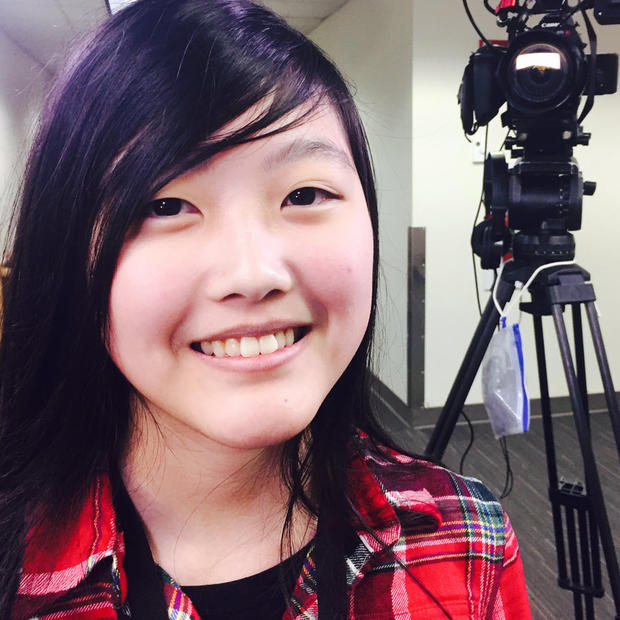 Aly Chu is a production intern at KCTS 9 and a freshman at the University of Washington. Currently a contributor at the UW’s newspaper, The Daily, she enjoys visual storytelling and hopes to major in communications. In her free time, she works as an illustrator and creates webcomics.