In a sign of the times, doomsday prep is bipartisan 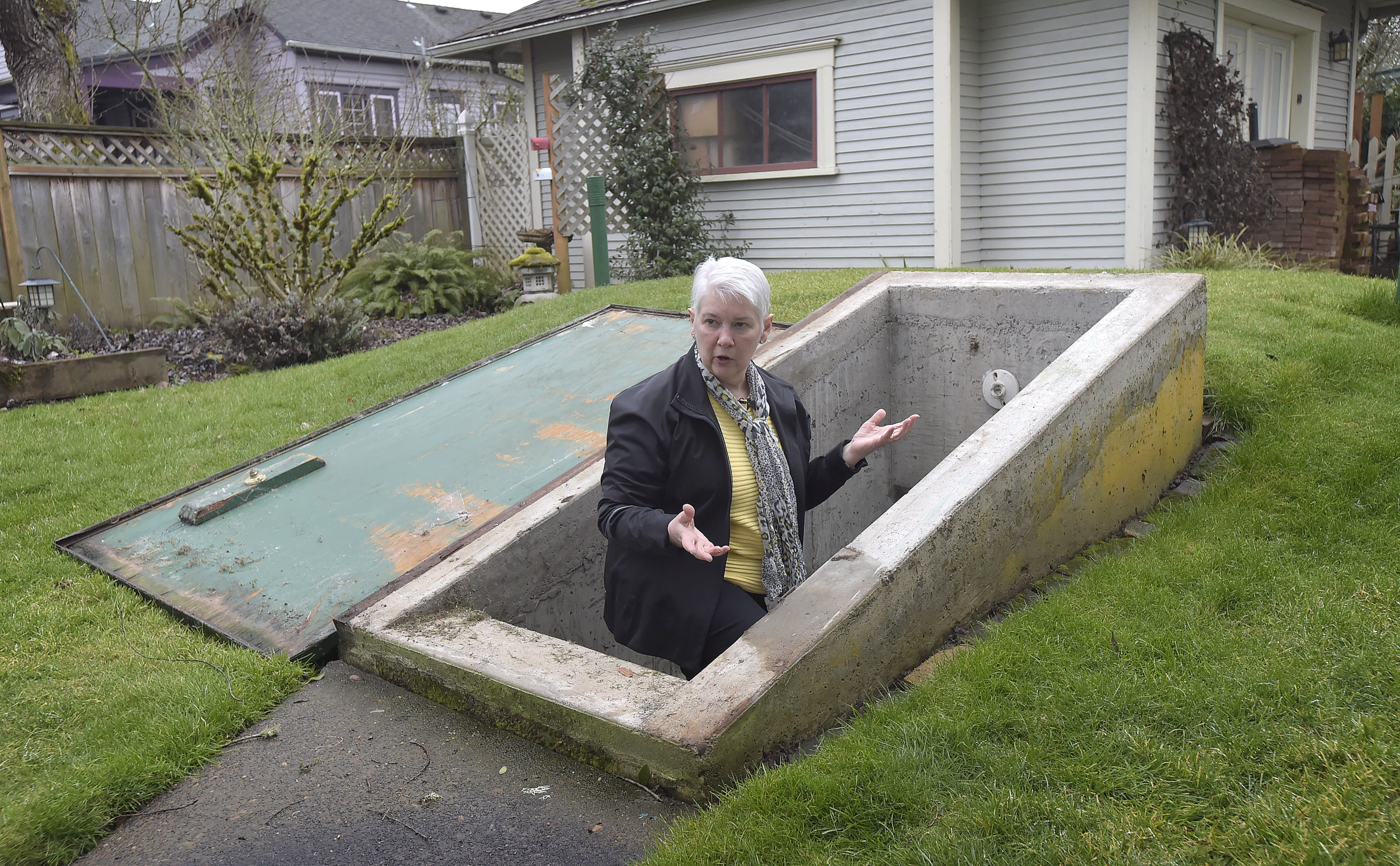 Marilyn Hill descends the stairs into the bomb shelter in the backyard of her historic 1906 Albany, Ore., home. Hill said the mound created by the shelter makes it difficult to landscape around. The shelter was built by a previous owner in 1961 using a government grant.

In 1962, the fallout shelter craze peaked, but the end of the world is experiencing a revival. Now, 55 years, some folks are prepping for the collapse of civilization and they span the ideological divide.

From rural Northwest preppers stockpiling stuff for doomsday to urban liberals panicked by Donald Trump’s proximity to the “nuclear football,” to super-rich high-tech execs moving into missile silos or building compounds in New Zealand, the apocalypse feels nigh. Some of the nervous are buying guns, installing electromagnetic wave-blocking Faraday cages, and installing underground bunkers to protect themselves against the post-apocalyptic hordes of “zombie” survivors — namely anyone who didn’t prep.

Euro-Americans have always been drilled to expect the end of the world—it’s in the Bible, after all. We’re knee-jerk millenarians. Populists have been predicting economic doom for generations. The clash of civilizations is how many in the new administration frame our global challenges. Our will to tackle global doom scenarios like climate change or the next pandemic seem to be overcome by the weaknesses of human nature and short-term thinking.

How do you respond?

If you live in Seattle, taking basic precautions while waiting for a Juan de Fuca quake, Mount Rainier eruption, Puget Sound tsunami, or North Korean warhead makes sense, and there are people who will advise you on prepping for doomsday. The Happypreppers.com website tries to put a smiley face on a grim subject, with lots of practical info (stash chocolate along with your gun!) to turn that doomsday frown upside down.

But we ought to be thinking much bigger than ourselves because whether Trump or Iran or Russia or China gets us into a nuclear war, or Wall Street triggers a global collapse or a rogue asteroid hits earth causing an extinction event, we have a duty to seek to minimize the damage. The best way to save civilization is by fixing it. Elli Kaplan, head of a Silicon Valley start-up called Neurotrack, told The New Yorker, “If I had a billion dollars, I wouldn’t buy a bunker. I would reinvest in civil society and civil innovation.” That’s sensible, but many find the end of civilization more exhilarating than the long slog of saving it.

Another possible response is to build a civilizational ark. Not an escape pod for living things but a sweeping record of ourselves.

There was a man who thought a lot about that, and 80 years ago he was the first person in the modern age to do something about it. His name was Thornwell Jacobs. He was president of Oglethorpe University in Atlanta, and he decided that “cosmic history,” as he termed it, indicated that civilizations, species, continents, oceans, planets and stars come and go. So, humans needed to leave posterity a record of our lives and accomplishments; it was, he said, our “archaeological duty” to do so.

Jacobs was inspired by several things, including the discovery of King Tut’s tomb and the gathering war clouds in Europe. Mass destruction wasn’t hypothetical, and if you put enough stuff into an underground repository, someone might later be able to reconstruct an ancient civilization and learn from it. Or rebuild civilization from scratch.

So, in 1937, he and his students began doing just that. They created the first modern time capsule — the Crypt of Civilization — a vault stuffed with human knowledge, scientific specimens, equipment, cultural artifacts, art, mineral samples, films and books on microfilm, sound recordings, pictograms, and much more. They sealed it with a stainless steel door on the eve of World War II and declared the contents should remain inviolate until the year 8113 AD.

The project also inspired the first object called a “time capsule,” a kind of miniature Crypt in the shape of a torpedo that was buried by Westinghouse during the New York World’s Fair of 1939 as a publicity stunt. The maker of that project referred to its finders millennia hence as “futurians.”

Would the futurians be human? A more advanced species? Just like us? Devolved knuckle-draggers? Or space aliens dropping in for a look-see? The Crypt would be ready for anything. It contained a hand-crank machine designed to teach the rudiments of English to its discoverers. Of the future, Jacobs said, “We can no more picture [it] than could the Cro-Magnon man draw upon the wall of his cave his vision of the sky-line of New York.”

The attitude inspiring the Crypt was one not of fear and defensiveness, but of the possibility, indeed certainty, that the future holds wonders our poor, frightened minds cannot comprehend. Our civilization is not an end point, but rather part of a long continuity with vast, inevitable disruptions. Instead of hunkering down and shooting zombies, we should be sending Care packages down the generations. Someone might find the Crypt or capsules like it useful in rebooting a civilization one day. Or enriching its understanding of ours.

One lesson of our time is that our democratic institutions might be more fragile than we believed, from libraries and an independent judiciary to a thriving middle class and the expectation of a college education. We are vulnerable to attack, hubris, decay, neglect and sheer stupidity. Our digital records appear to be more ephemeral than the first recorded messages to the future that were inscribed on terracotta by ancient Mesopotamians.

We ought to be planning to improve on the Crypt with ever more creative and comprehensive iterations of it. I helped plan a 400-year time capsule vault in Olympia that is just one innovative idea. It features 16 steel capsules, one filled every 25 years until all are to be opened in the year 2389. The first two capsules feature messages to future by ordinary people and artifacts including Amazon Kindles loaded with the works of Washington authors, music recordings from "iconic" Washington bands and Seahawks memorabilia. It is overseen by an organization of official “Keepers” recruited as children to update the capsule on schedule from generation to generation.

Nothing of the scale or the ambition Jacob’s Crypt has been done since, though we’ve tried a few other new things like shooting messages into space (see Voyager’s golden disc). We should channel our apocalyptic fears into something less selfish than private bunkers, something of more lasting value to the futurians who might be tasked with learning from the mistakes of yet another dead civilization.