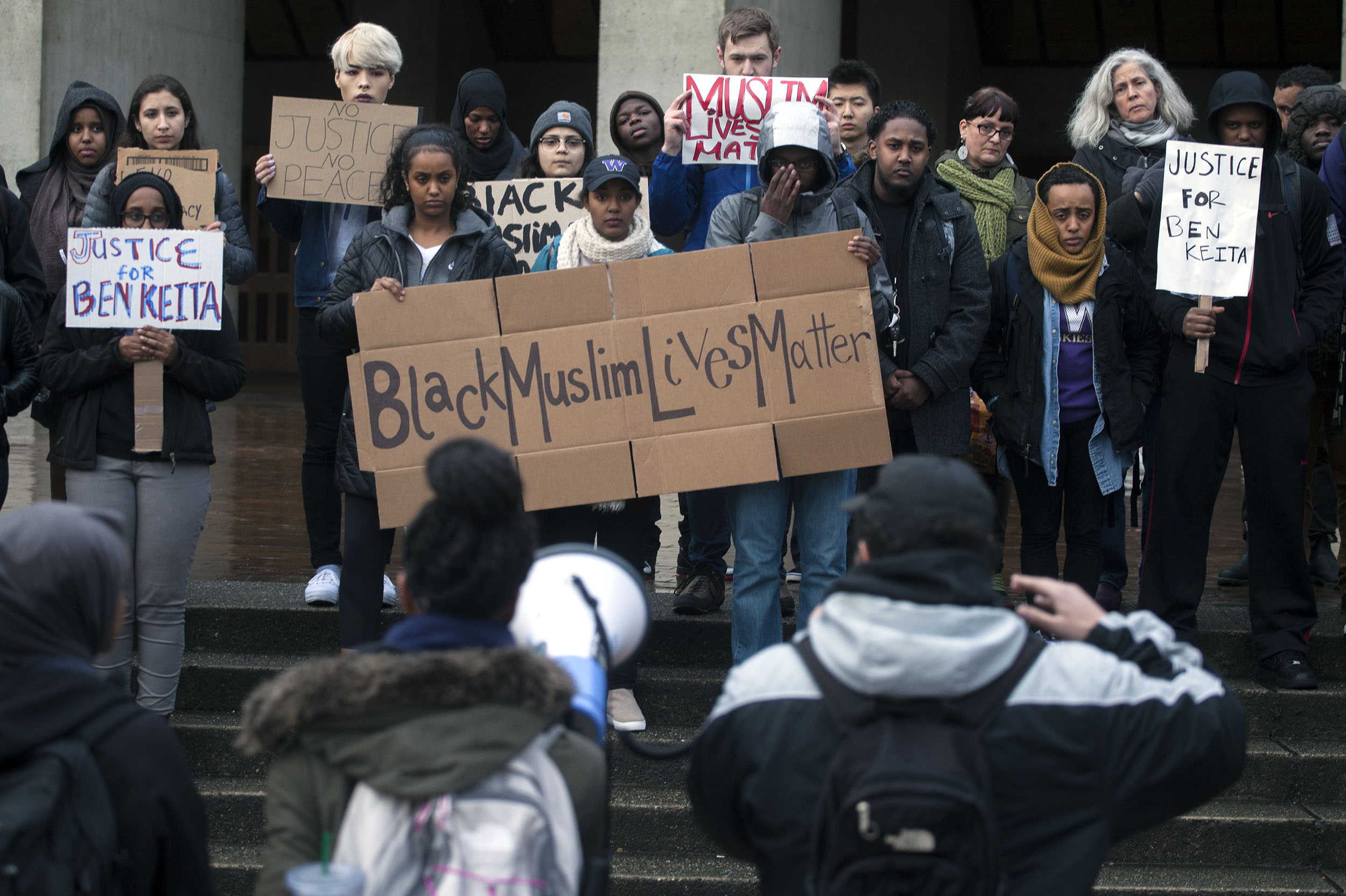 A vigil in memory of Ben Keita in Red Square at the University of Washington on March 7.

Two months after an 18-year-old African American Muslim man was found hanging in a tree north of Seattle, supporters of his family are stepping up their search for answers about his death.

On Wednesday, nine Democratic legislators from Snohomish County issued a plea for the FBI to take up the family of Ben Keita on their requests for the bureau to conduct its own investigation. That followed a vigil at the University of Washington on Tuesday night by students.

Keita was found hanging in a tree in Lake Stevens, east of Everett in Snohomish County, on Jan. 9, some six weeks after his disappearance on Nov. 26. His body was near a trail in an area where it’s believed that police had searched twice earlier.

Authorities appear to believe it was a suicide, although it isn't officially classified as one at this point. Lake Stevens police say they are waiting for DNA tests results on the rope and Keita’s body before deciding whether to close their investigation. The FBI has issued statements saying it has been working with Lake Stevens police but it has not said it would open its own investigation.

Ibrahima Keita, Ben Keita’s father, has questioned whether the police have conducted as comprehensive an investigation as they should have or rushed to a conclusion that it was a suicide. In an interview with Crosscut over the weekend, Ibrahima Keita said his son, a student in Everett Community College’s Running Start program for high school students, had “no history of depression, anxiety, any psychological breakdown at all.”

“He was dreaming of becoming a medical doctor,” Keita added.

The Washington Council on American-Islamic Relations took an early interest in the case, but there has been a growing chorus of calls for a full FBI investigation from groups that include churches in Seattle and the Snohomish County Branch of the NAACP. Some of them have pointed to the history of lynchings, usually by hanging, directed at African Americans and antagonism toward Muslims from some sectors of the population.

Janice Greene, president the Snohomish NAACP, told Crosscut, “Any time a Muslim African American man is found hanging, we’re going to take a strong look at that and see what the background is.”

The NAACP said in a press release that Snohomish County has seen a number of incidents that could reflect a pattern “of escalating violence” against minorities, and others have questioned whether Keita’s death could be a hate crime. At a press conference on Wednesday, Keita’s family said they weren’t aware of any hostility that might have been directed toward him. But they said he was quiet and may have tried to shield his family from any difficulties.

The statement from the Snohomish County legislators, all members of the state House of Representatives, said, “Regardless of the [ultimate] findings, there is so much divisiveness, so much hate speech and anti-immigrant sentiment in our nation at this time, that it’s impossible to hear about this and not see it in light of the current climate. That is not what Snohomish County or our state stand for; in fact, we always come together at a time of loss.” They, like others supporting the family, called for anyone with information to come forward.

Greene and many others have stressed sympathy for the family and the family’s need for answers. And the calls for the FBI involvement have portrayed the bureau as having the expertise to make a judgment that could be trusted.

At the UW, student Hanan Hassan said, "Times like these are deeply painful for family and friends of Ben, but it gives law enforcement and FBI an opportunity to show that they stand with our community.”

Arsalan Bukhari, CAIR’s executive director in Washington, said recently, “We want to make sure the FBI brings in their expertise, their experience and their human resources to ensure a thorough, comprehensive investigation.”

While the supporters aren't alleging a crime, there have been elements to the case that have been confusing to them as well as the family. The medical examiner’s report changed Keita’s manner of death to undetermined after first determining suicide.

Bukhari pointed to the finding of the body in early January. “There were searches done on Nov. 30 and Dec. 1, and at least one with a K9,” he said. “There was a helicopter search on Dec. 7. Either the searches were missing something or the body was missing."

“We don’t want to speculate as to the reason, or the actual cause of his death. We just don’t know. What we do know is there are many things that cause concern and that’s why we’re asking for the federal investigators,” Bukhari said.

Ibrahima Keita said police may not have tracked down some of the physical evidence.

“From what I know right now, all the items he had on him were not found with the body … I told that to the police," he said. "A house key, and the key to his yellow car." According to the police report, one car key was found locked in the car, though Keita knows of a different car key and house key that, to the best of his knowledge, are still missing.

According to Keita, the police could be difficult to contact at times and there were leads the police did not pursue, or they pursued later after he brought it to their attention. He said he met with the Lake Stevens police chief: “I asked why they wanted to close the case without running an analysis of many of the items found on the body. Now they are running those.”

The Lake Stevens Police Department (LSPD) has defended their handling of the case but has said they grieve with the family and the community over Ben Keita’s death.

A press release from the LSPD recently quoted support from the FBI, saying, “While it is still premature to make any conclusion because the investigation is active and ongoing, the FBI concurs with LSPD’s assessment that evidence collected to date does not provide any indication of a criminal act. However, the FBI will remain in contact with the LSPD and will reevaluate our position if information develops that suggest otherwise.”

All of this is occurring in a difficult atmosphere. At the UW vigil, a Somali Student Association organizer, who didn’t want to give his name, said he feels targeted for his skin color and being Muslim. “I feel intimidated at any point, at any time where I’m around a predominantly white area, white institution,” he said. “I am feared, and I fear things.”

Kelle Brown, minister of worship at Plymouth Congregational Church in Seattle, said at a Feb. 28 press conference that, historically, authorities often rushed to call lynchings of African Americans suicides. “Today we are careful not to rush to judgment,” she said. “However, we are also careful to acknowledge that in this atmosphere of fear and uncertainty where one must still declare black lives matter and where Islamophobia is alive and well, there must be a thorough investigation into the death of this young man."

Kendall Powers is a local freelance writer focusing on stories regarding racial justice and the shifting political climate.