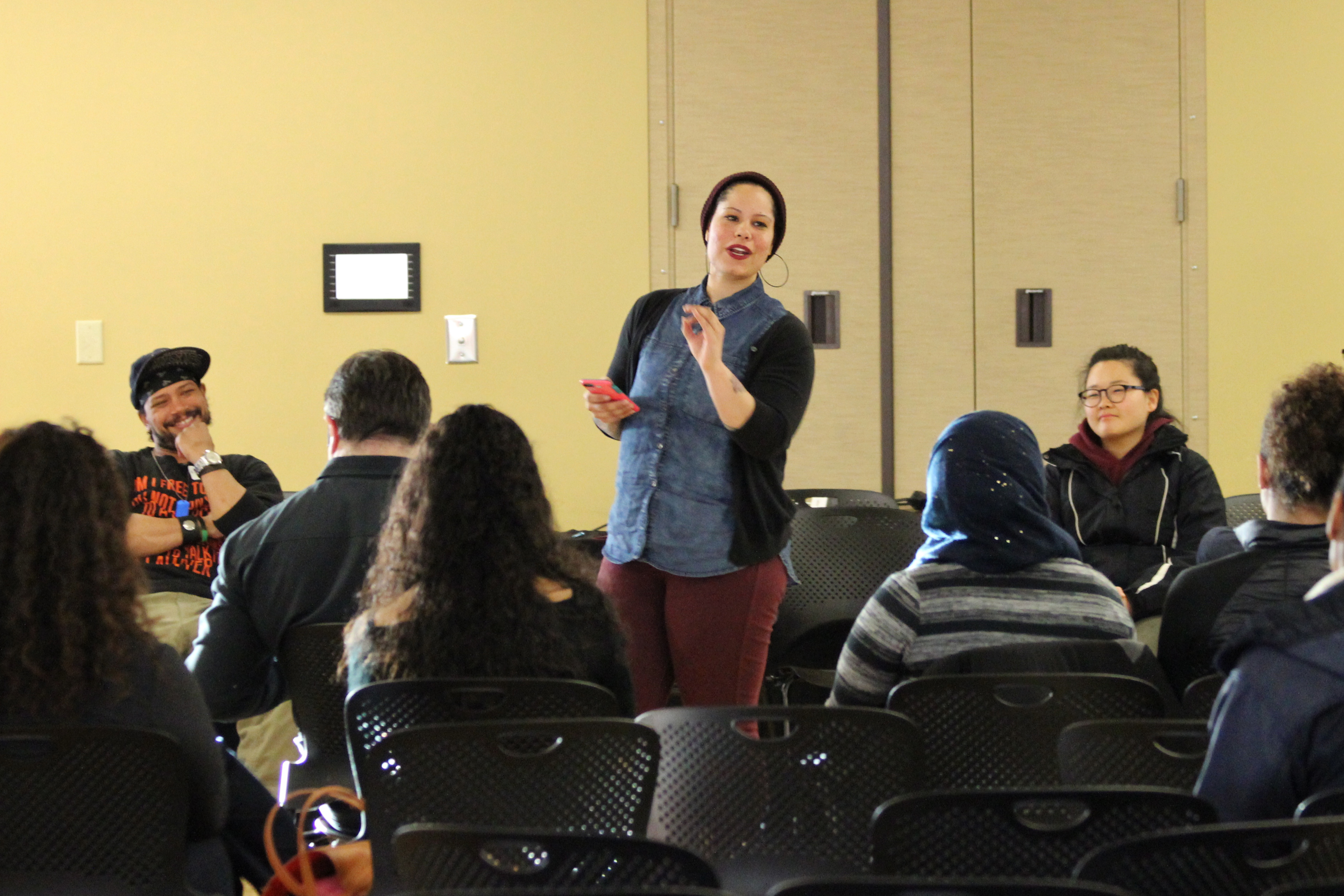 Activist, lawyer and spoken word artist Nikkita Oliver will challenge incumbent Ed Murray in this year's race for Mayor. And although Seattle elections are technically non-partisan, she will be running with the support of the newly formed “Peoples Party of Seattle” — a collection of community and civic leaders, lawyers, artists, activists and teachers that started organizing immediately following last November’s election.

Oliver is the sixth person to announce a run against Mayor Murray, but where the other candidates range from relatively unknown to completely unviable (serial City Hall commenter Alex Tsimerman, for example), Oliver brings with her a strong cadre of supporters from Seattle’s growing activist and social justice communities.

At 31, Oliver is almost exactly half the age of Murray. She teaches part-time at Washington Middle School and Franklin High School. She works for Creative Justice, an arts-based alternative to incarceration. She's an attorney, which she mainly practices pro bono. And she's a singer and poet.

Oliver is a voice for large-scale criminal justice reform, speaking forcefully in the public sphere against funding traditional criminal justice systems — like the proposed new youth detention facility or the Seattle Police Department's proposed new North Precinct station — advocating instead for what she refers to as "community based accountability."

Speaking to KUOW late last year, Oliver called for a model that would eventually lead to the elimination of police entirely. “We don’t need a separate institution to keep the peace or enforce the laws,” she said. “What we need is a cultural shift that actually acknowledges the human rights dignity and sovereignty of all people and we’d see a decrease in crime.”

Oliver insists her decision to run was not her idea. “It’s not like one day I woke up and said, ‘I want to be mayor,’” she said Monday evening in the Central District’s Washington Hall, where members of the Peoples Party were planning their official announcement. Her “aunties and elders,” she said, encouraged her to think about running for office. After careful consideration, she decided, "let's do it."

Her supporters say she's the best person to represent their cause. "She's the proper representative of all the stuff we're working towards," said Tuesday Velasco, a local musician.

"I think she's one of the most humble people I've ever met," said Edwin Lindo, also a lawyer and activist.

In some ways, her entry into politics echoes Kshama Sawant’s 2013 political campaign when that candidate insisted she was drafted by the Socialist Alternative party to run as part of a broader movement. While members speak highly of Oliver, emphasis on the individual candidate is deflected, much as it is in conversations with Sawant.

The Peoples Party has spent months deciding on a platform that includes a radical rethinking of criminal justice investments; revisiting the city’s housing proposals to extract more from developers for affordable housing; slowing gentrification; and examining an even higher minimum wage than the recent landmark achievement of $15 an hour.

In the broader spectrum, there's not likely to be a lot of daylight between members on these issues. Still, Oliver says crowdsourcing her campaign pledges means she cannot stray or compromise.

Oliver came to Seattle from Indianapolis in the early 2000s and attended Seattle Pacific University. In an interview with Crosscut last year, she spoke of her time there as a queer woman of color in the largely white environment of SPU. "Being in a place that is culturally jarring really set me up to ask some key questions that I inevitably was going to ask anyways as a black, mixed, queer person who comes from a family that wasn’t always economically OK,” she said.

She’s since established herself as one of the most well recognized and respected leaders of an activist movement that has occasionally dogged Seattle’s de facto center-left establishment, which includes Mayor Murray. In 2015, Oliver won the Artist Human Rights Leader Award from the City of Seattle for her spoken word work and activism with the Black Lives Matter movement. In 2016, she collaborated with Macklemore on his song “White Privilege II,” performing on “The Late Show with Stephen Colbert.”

The Peoples Party knew they wanted to back a candidate for a Seattle office. They generally support the politics of Jon Grant and Sheley Secrest, who are both running for the open position 8. Now they're insisting the best person to oversee the city is Oliver. “We have a city that has a lot of progressive speak and not a lot of progressive action,” said Oliver.

Oliver has never been shy in her criticism for Mayor Murray, namely that his progressive talk does not translate to "truly progressive" action. The challenge before her is large. Her goal is to be the most left-leaning mayor Seattle’s ever had, which will make people uncomfortable even in progressive Seattle. Mayor Murray already has an enormous war chest of funds and endorsements, raising more than $200,000 and running the table on support from both business and labor. And according to a press release earlier this year mailed out by his re-election campaign, Murray holds a 60 percent approval rating.

While Murray certainly has his share of dissenters both to the right and left of him, it’s unclear if either end makes up enough of a voter base to pose a real challenge.

Still, if any group has shown itself able to turn out large groups of people and get under Murray’s skin — occasionally interrupting him in public forums — it’s Oliver’s community of #BlocktheBunker, Black Lives Matter, No Youth Jail activists.

“Everything in my history tells me this is not what people like me do, that we don’t get this kind of opportunity and that we don’t get to make change in this way,” Oliver said. “And I think that’s the exact reason why folks like me and folks sitting at this table should be running for office. We need to change the narrative and we need to be a transformative presence.”