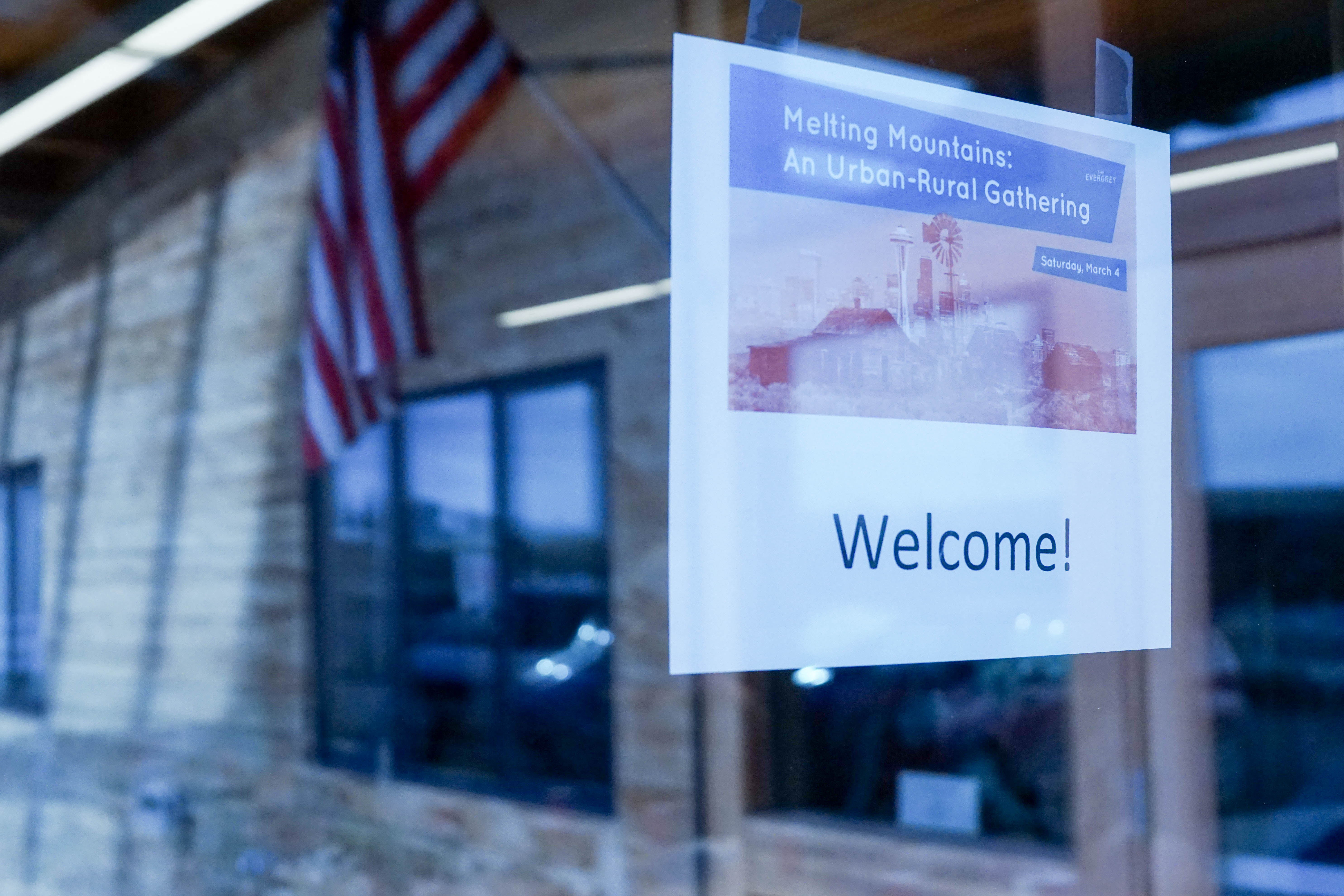 The gathering was called "melting mountains" because of the many mountain ranges between Seattle and Sherman County.

Last Saturday, March 4, pro-Trump rallies — and counter- demonstrations — occurred around the country, including in Olympia, Washington, and Lake Oswego, Oregon. But at the same time there was also another kind of encounter taking place. A group of about 22 King County residents traveled some five hours to rural Eastern Oregon to meet 16 of their mirror image counterparts, based on the 2016 election. There were no protest signs, no red hats, just conversation and cold cut sandwiches. It had the feeling of a diplomatic mission, like opening ties to China.

The purpose was to try and understand the other side of the American — and regional — political divide. King County voted 74 percent for Hillary Clinton last November. The nearest county that voted exactly the opposite was Oregon’s Sherman County, with 74 percent for Trump. For the people from the Seattle area, the trip was a stretch in terms of time, distance and political orientation. How would they be greeted on Trump-friendly turf? What is politics like outside the Bubble?

One thing is clear: The political divide is partly a geographical one.

Sherman County is dry, plateau wheat country south of the Columbia River. It is on the east side of the Cascades, tucked between the Deschutes and the John Day rivers. It feels deeply linked to another era. As you turn south on Highway 97 toward Moro, Sherman’s county seat, a sign announces that you are entering a “Journey Through Time.” It refers to a scenic byway that leads to the John Day fossil beds, but it could be a reference to an entire country. Part of the Oregon Trail passed through here, and it still looks like the old West. This is a land of wheat ranches, sagebrush and cattle.

Founded in 1889, Sherman County is half the size of the state of Rhode Island, yet with just over 1,700 residents, it has a population slightly smaller than that of Carnation, Washington. It is the second least populated county in Oregon, with roughly two people per square mile. That’s a lot of land and very few folks. By contrast, King County’s population is over two million. If you seek to escape density, Sherman beckons. One of its commodities, said a local, is “solitude.”

The editors of The Evergrey, Anika Anand and Monica Guzman, came up with the idea for organizing the post-Donald Trump election get-together. The idea wasn’t to convert or be converted, but to reconnect. The Evergrey reached out to folks in Sherman County, including Sherry Kaseberg who is editor of The Sherman County eNews. There’s no newspaper in the county, so her volunteer effort keeps people updated on all the doings. She linked the Evergreylings to Sandy Macnab, a partially retired crop and soil scientist from the Oregon State University Extension service. The result was an afternoon confab at the Extension’s facility in Moro. Seattleites bused down and were greeted warmly by the Shermanites, who provided lunch and a quick tour of the town.

It could have been awkward, but everyone was there to play nice. People sat at tables and introduced themselves by giving their names and saying what they hoped to gain from the day’s conversation. One of the Seattle contingent, Laura Miller, broke the mild initial tension by saying her goal was to look as good in a cowboy hat as an older Sherman County man did wearing a black Stetson. Everyone laughed. He did look good.

To break the ice and give people some idea of how people in the room thought, people were asked to gather in groups: Trump voters there, Clinton voters over there. It produced no real surprise, except that a handful of people clustered in a third group; they had voted for neither candidate. One piece of common ground: Everyone gathered agreed that Congress was not the best answer to our nation’s problems.

What followed were one-on-one conversations between King County and Sherman County people who discussed everything from childhood memories to their respective political viewpoints or concerns. The tough part, many found, was just listening without interrupting, but the room came alive with the buzz of people connecting and conversing. No tirades, no lectures. At the end, people reported to the group what they’d heard. Here are some of my takeaways from what I observed:

The world in a piece of bread: During the introduction, a man named Darren Padget looked down at his plate and said that people don’t know what goes into making a piece of bread. This was a recurring theme: We city folks don’t understand the economy and lifestyles of Sherman County, which are indicators of its political leanings. Padget is a member of Oregon’s wheat commission, works over 3,000 acres himself and is engaged with the outside world. Some 85 percent of the county’s grain crops are exported to countries like Japan, China, Taiwan, South Korea and the Philippines. The wheat makes bread, but also cookies, crackers and ramen noodles. A lot of “toil, soil and oil” go into growing crops. Selling it, shipping it, using best new farm practices, buying equipment, fostering trade relationships — Sherman County might be remote, but it’s connected to a web of international commerce.

Producing the raw material for loaves and noodles — feeding the people — is complex. It takes two years of rainwater, for example, to produce a crop of dry land wheat. Understanding how bread winds up on your plate and the sweat that goes into it is crucial to understanding wheat country. A number of people said they cared about the environment, but didn’t like the number of government rules. Padget’s one worry about Donald Trump: trade. With the Trans-Pacific Partnership dead, he’s hoping bilateral agreements will keep the wheat flowing, but what happens next is a concern for U.S. exporters.

Scale Matters: Moro, Oregon, population 307, is a modest place, functional, not much of a tourist stop, but there’s a lot going on. The old brick county courthouse, built with clay dug out of an adjacent field, is getting a brand new addition. The modern school has been expanded with a wing for elementary students. The day we were there, most folks had left town for a high school basketball tournament. The school sported a beautiful new athletic field. Macnab, our de facto tour guide pointed out projects that were helped out with volunteer labor virtually everywhere: People leveled and laid the field’s turf; a local veteran’s group donated a building for the historical museum; volunteers publish the local online newspaper.

In a county with 1,700 people, there’s no need for Seattle-style process or bureaucracy. This shapes political views: smaller government, more people problem solving, leave solutions to the locals. News for Mayor Ed Murray: Urban Seattle is not the only role model for the nation. A number of folks at the event expressed the desire to have fewer top-down decisions and more local control. Adapting to local conditions, one said, would strengthen unity by letting people shape communities to their particular needs. Another said that with more local solutions there would be “less anger and [people] would be a whole lot happier.”

Cougars in the Road: This is a place where deer and antelope play. One attendee showed me a video of young elk wandering down the road in front of his farmhouse. In talking about guns, someone said we in King County don’t need guns in our daily encounters like they do. “You don’t have cougars walking down the middle of your roads.” A Vashon Islander spoke up, “We have a cougar!” And for the record, Seattle also once had Leif Bearickson. One Shermanite suggested that if Seattle enviros want to reintroduce wolves into the Northwest, maybe they should be put in Seattle’s city parks. Perhaps that would revise urban liberals’ views on gun control.

Prosperity in the Wind: On top of a ridge in town, you can get sweeping views of the county and beyond. In the distance are battalions of windmills marching across the landscape. There are nearly 600 of them in Sherman County, which has an abundance of wind. At $1 million to $2 million per windmill, they reflect more than a half-billion dollar investment and they produce revenue for farmers who lease the land they sit on. The turbines produce clean energy and they also generate property tax revenues, helping to fund improvements like Moro’s school and courthouse expansion. Funds from the turbines also go into the pockets of county property owners in the form of a tax rebate, a bit like the checks Alaska residents get from oil revenues, Macnab says. Like many counties along the Columbia, Sherman is generating energy. The wide-open spaces and low density aren’t just for cattle anymore.

A Generation Gap: The Evergrey is published by two Millennials who don’t particularly identify as such. They hope to reach people who want to talk meaningfully and civilly regardless of age. But the event did attract a fair number of younger people in the Seattle visiting contingent, and by and large the Sherman County group was about twice as old as the Evergrey group.

Roger Whitley, who retired to Sherman County and who once worked overseas for the State Department, felt the generational divide. He told me that he grew up in the Industrial Age where you worked with your hands at something for 40 or 50 years. Gesturing to some young King County folk on their smart phones, he said that young urban people work more with their minds and expected quicker gratification. Think of the young “knowledge workers” trooping to Amazon in South Lake Union with their lanyards and North Face jackets — not a workforce one is likely to see in Moro. Still, there was some recognition that the generations need to work together. Said one rural resident, “You buy our wheat and we need your computers!”

Common Ground: Sandy Macnab quoted the comic strip Pogo, popular back in the day: “We have met the enemy and he is us.” The young folk in the room didn’t know Pogo, but the sentiment put the blame where it belongs. There seemed to be agreement that there was too much rancor in discussions. Macnab said it was safer these days to discuss religion at his family’s Thanksgiving gatherings than politics. Also, he indicated people need to be better informed. Quoting President Harry Truman, he reminded the group that “Not all readers are leaders, but all leaders are readers.” Lots of people nodded, but my thought was, someone better tell Trump.

Laura Miller summed up her day by saying it was “free speech with manners.” Jessica Richelderfer, a Sherman County mom and writer, observed, “You don’t know what you stand for until you meet someone who’s different from you.” That to me seemed like a fitting lesson for the day. Our differences broaden our minds, but also sharpen our thinking. So does spending some time seeing the world from another perspective. Trite, but true.

During the slog back to Seattle, some King County group members wished they had spent more time talking, going deeper. But the day felt like a first step. Emails and contact information were shared. “You can all come back and get harvest jobs now,” offered Sherry Kaseberg of the Sherman County eNews. Another idea is to invite the Sherman County folks to spend a day inside the Seattle bubble. The surface of connecting has just been scratched.

Read more about what the Seattle group learned at TheEvergrey.com