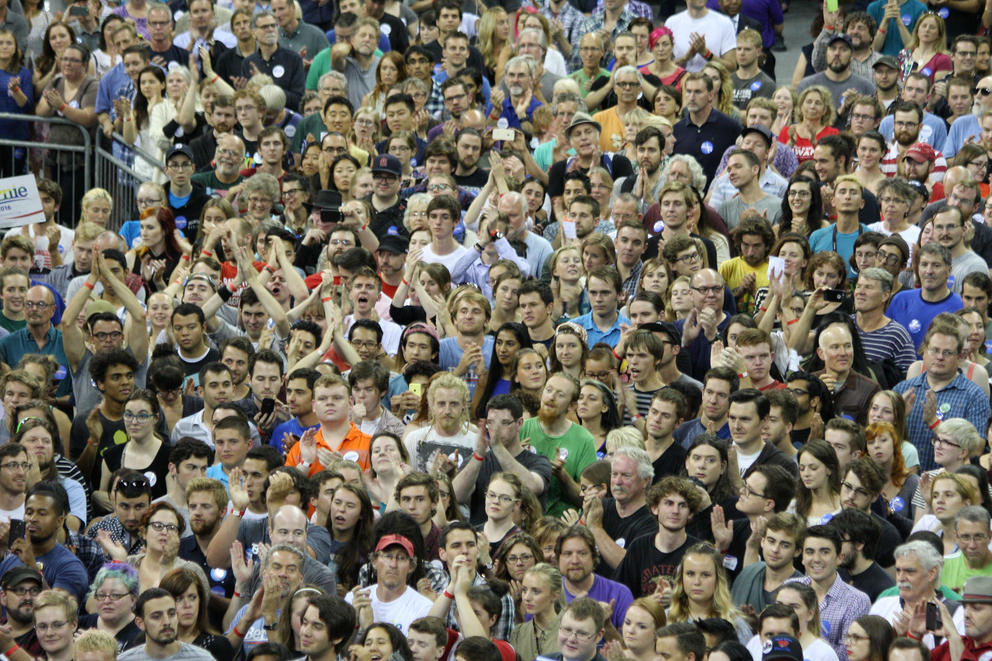 A crowd of supporters at a 2015 Bernie Sanders rally at the University of Washington.

Activist/lawyer/writer/performer Nikkita Oliver is running for mayor with the support of the new Peoples Party of Seattle, a group formed in Seattle in response to November’s election. When I hear the word “party,” my ears perk up.

Candidates usually run on their own in Seattle, our municipal elections being non-partisan. We booted political parties from the ballot with a city charter amendment in 1910. That was the progressive era that saw a lot of reform in local politics: we abolished council wards (districts) and women got the vote, among other things.

Now, districts are back. Will parties return?

Before parties got the boot, people would be nominated by a party and run on a “ticket.” We’ve always had Republicans and Democrats, of course. But back in the 1880s Seattle had the Law & Order League and the Businessmen’s Party. John Leary was elected mayor representing the latter n 1886.

In the late 1800s, there was a People’s Party —different spelling (note an apostrophe). It elected mayors Beriah Brown (1878) and William Shoudy (1886), though Shoudy’s main platform then was being anti-Chinese. Eventually, the People’s Party name gained wider, more progressive currency in the Populist era.

Back in the day, there were lots of labor and socialist parties, such as the United Labor Party and the Socialist Workingman’s Party. We had the Prohibition Party (they endorsed Seattle’s only woman mayor, Bertha Knight Landes, in the 1920s). In 1906, the Municipal Ownership Party —advocates of public power and transit — elected William Hickman Moore mayor by a mere 15 votes, which ended a string of five consecutive GOP mayors. There was even a party called the Citizen’s Non-Partisan Party, which sounds like a party for people who didn’t like parties.

Today, we tend to think of Seattle as a one-party town. City council and mayoral candidates make the rounds of the Democratic legislative districts looking for approval, endorsements, volunteers and donors. The GOP, once a major presence up until the 1970s, has vanished like the giant ground sloths whose bones are in the Burke Museum. Democratic wrangling is still important to the process but it reminds me of an old National Lampoon cartoon that showed an ice cream shop in Canada offering 64 flavors of vanilla. The choice here is often left or lefter. Still, differences can be sharp on civic issues.

In post-party Seattle, races for mayor and city council became the province of coalitions, leagues, labor alliances, women’s clubs, good-government groups and powers such as the Seattle Chamber. This system seems to suit Seattle to a “T.” We’re independent, skeptical and eschew traditional politics. Coming together passionately for a cause or a set of issues seems to work better than permanent structures. We also have relatively flat hierarchies — you can come out of nowhere and climb a short political ladder here easier than in many other cities. We’ve generally avoided permanent political machines and like to experiment (see “Democracy” vouchers).

There have been some memorably successful coalitions. CHECC (Choose an Effective City Council) in the 1960s and ‘70s was a bipartisan group that wanted to reform the “musty dusty” and corrupt Seattle council.  They successfully elected a number of council candidates —Phyllis Lamphere, Tim Hill, Randy Revelle, John Miller — who were younger, reform-minded and staunchly middle-class candidates. One of CHECC’s founders, Peter LeSourd, believes the group generated a reform atmosphere that helped elect Sam Smith, the city’s first African-American councilman, and a 34-year old Democratic mayor, Wes Uhlman, in 1969.

In slightly less Antediluvian times, independent parties have made their mark on city elections and their aftermaths. One example is the Seattle Green Party, whose three candidates —Nick Licata, Peter Steinbrueck and Richard Conlin — were elected to the city council in the late 1990s. Each was smart, green and a progressive outsider. Most recently, there was Kshama Sawant’s election as the standard bearer of the Socialist Alternative Party in 2013. Sawant’s party put raising the minimum wage to $15 an hour on the civic agenda. If the Green Party and Socialists haven’t yet elected a mayor, they have certainly helped steer the city’s agenda.

Activist parties do shape debates. Seattle’s Black Panther Party in the late 1960s helped put race on the front burner while it carried out good deeds (free breakfasts for children, free healthcare) and forced the city and state to pay attention to the struggle of African Americans. Clara Fraser and the Radical Women/Freedom Socialist Party in the ‘70s pushed women’s rights, abortion rights and workplace equity. The legacy of the Bernie Sanders movement could be to re-energize the left — whether individuals fall within or outside the city’s Democratic circles. That could be a boon for alternative party activists and coalition groups. And it could boost off-year-election energy. Alternative parties raise issues, define problems, spur action.

Nick Licata, now retired from the council, wrote a book drawing on his years of experience as a longtime activist (he started in the radical Students for a Democratic Society in the ‘60s) and as a productive and popular city council member. “Becoming a Citizen Activist” is a handbook, not a party manual, but Licata pulls lessons from groups such as Occupy Wall Street, Black Lives Matter and even the conservative Tea Party. “You need to have a dual-prong approach,” he writes. “Being in the streets protesting arouses the public, but afterward organized efforts are needed to get your supporters elected to office so they can actually change the laws.”

Wise words for anyone who wants to get a party started in Seattle.