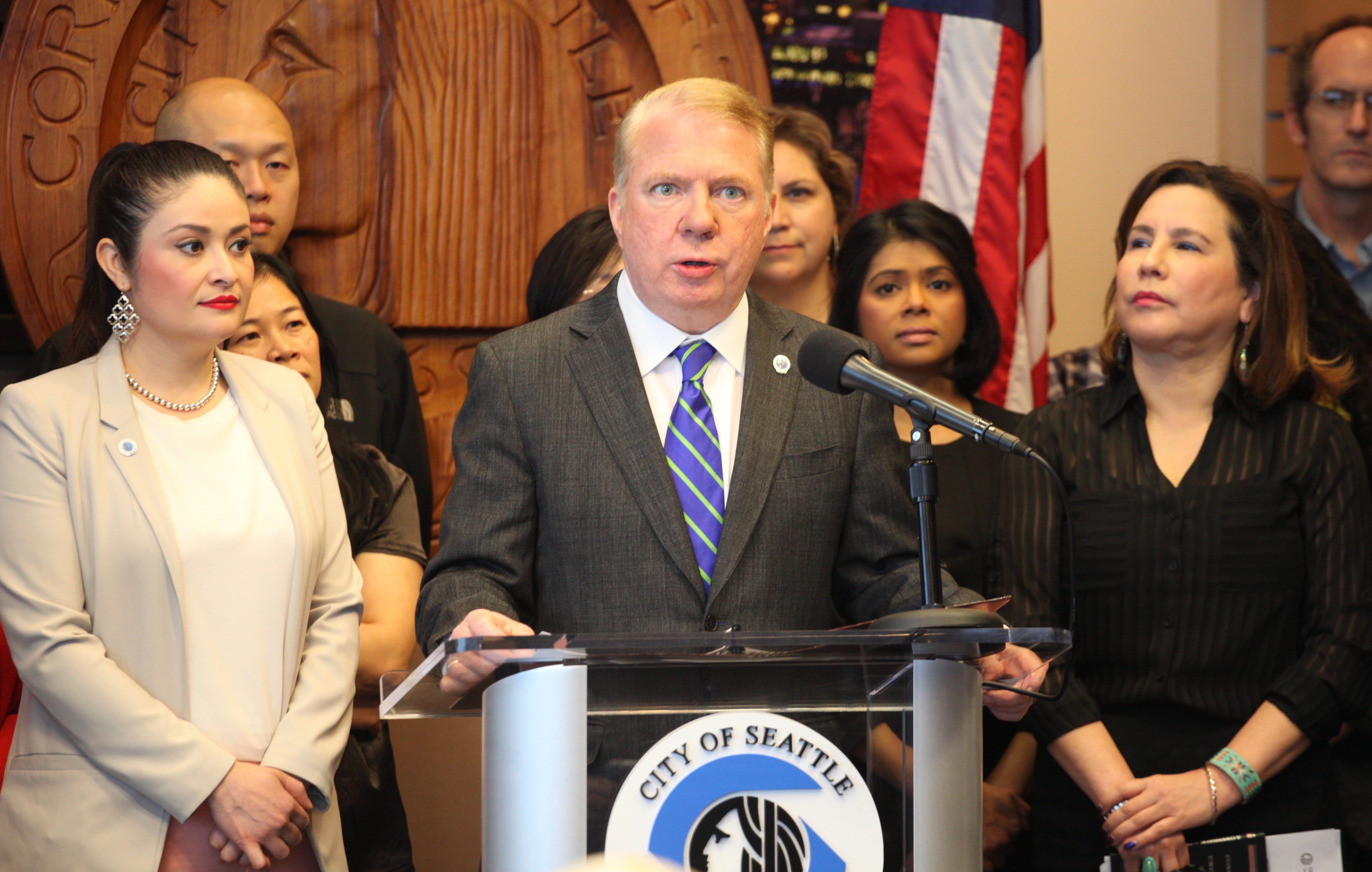 Mayor Ed Murray, with Seattle City Council members Lorena Gonzáles on the left and Debora Juarez on the far right, announces a lawsuit against the Trump administration.

“Let me be clear about the President’s executive order: It is violating the law and it is unconstitutional,” Murray said Wednesday in a press conference at City Hall.

President Donald Trump has long threatened to punish cities that don’t help federal immigration agents track down or detain undocumented immigrants. If successful, this lawsuit could render that punishment illegal.

The case will make two arguments. One: that the federal government cannot order local police departments to do anything or coerce action by threatening to withhold dollars.

And two: that Seattle hasn’t done anything illegal. Even if the city wanted to help, lawyers plan to argue, it cannot because the city doesn't collect information on undocumented immigrants.

While the Trump administration has threatened to pull funding from sanctuary cities, it has not yet done so. Still, Murray contended a lawsuit could not wait.

“We’re dealing with communities that are really afraid and we’re dealing with a situation where it’s very hard to plan budgets, where you have inconsistent statements that are threatening our own budgets in our own cities,” the mayor said. “So the time to act is now.”

City Attorney Holmes echoed that point, arguing that the administration's directive will make the city less safe. “We see real harm on the streets from the fear mongering that is going on at the highest level,” Holmes said. “So by taking action, what we’re seeking is to have a sober, judicial statement of the law to counter attack all the irresponsible saber rattling that’s going on and frightening our residents.”

San Francisco, as well as the smaller towns of Lawrence and Chelsea in Massachusetts, have filed similar but more limited lawsuits. Holmes said Wednesday that those cases are slightly different because they represent counties that operate jails. Those suits are also challenging the federal government’s insistence on holding undocumented immigrants for no other reason than being undocumented.

There is no precise legal definition for what makes a city or state a “sanctuary.” In Seattle, it means public institutions such as schools will not ask people about their legal status. More significantly, Mayor Murray instructed the Seattle police department to not ask about immigration status and to not aid federal law enforcement in its efforts to track down undocumented immigrants. The King County Sheriff’s Office has followed suit and the county jail does not hold people merely because they are undocumented.

Trump last month signed an executive order threatening to strip funding from sanctuary cities, although the order was more of a statement of intent than concrete action. On Monday, Sessions threatened to withhold community policing grants from sanctuary cities, which seemed to be the most concrete step toward treating these locations differently.

Holmes spoke dismissively of Sessions on Monday. “I think that empty suit excuse of an Attorney General hasn’t given us anything to react to,” he said. “He’s simply helping his boss change the subject.”

While the announcement of the lawsuit comes on the heels of Sessions’ threats, Seattle had all but committed to legal action several weeks ago. Last month, Murray demanded that the Trump administration provide a precise definition of “sanctuary city,” and spell out exactly what Seattle is and is not legally obligated to do. He followed that pronouncement with a threat to sue if the city was not provided with the records quickly.

This new lawsuit, by contrast, could have national implications on the scale of the state’s legal fight against the travel ban, throwing yet another wrench into one of Trump’s campaign promises.

Sessions has said illegal immigration makes communities unsafe. To which Murray on Wednesday replied: “It’s when you marginalize and you drive them away from city services and make them fearful of the police and push them underground that these communities become unsafe and the City of Seattle becomes unsafe."

The suit will be filed in the U.S. District Court for the Western District of Washington, the same court that blocked Trump's initial travel ban.

Correction: This story originally stated that the city would spare no expense on the legal fight. We later learned that the law firm Mayer Brown will take the case pro bono.