The Sonics star who ignited NBA dreams for black youth 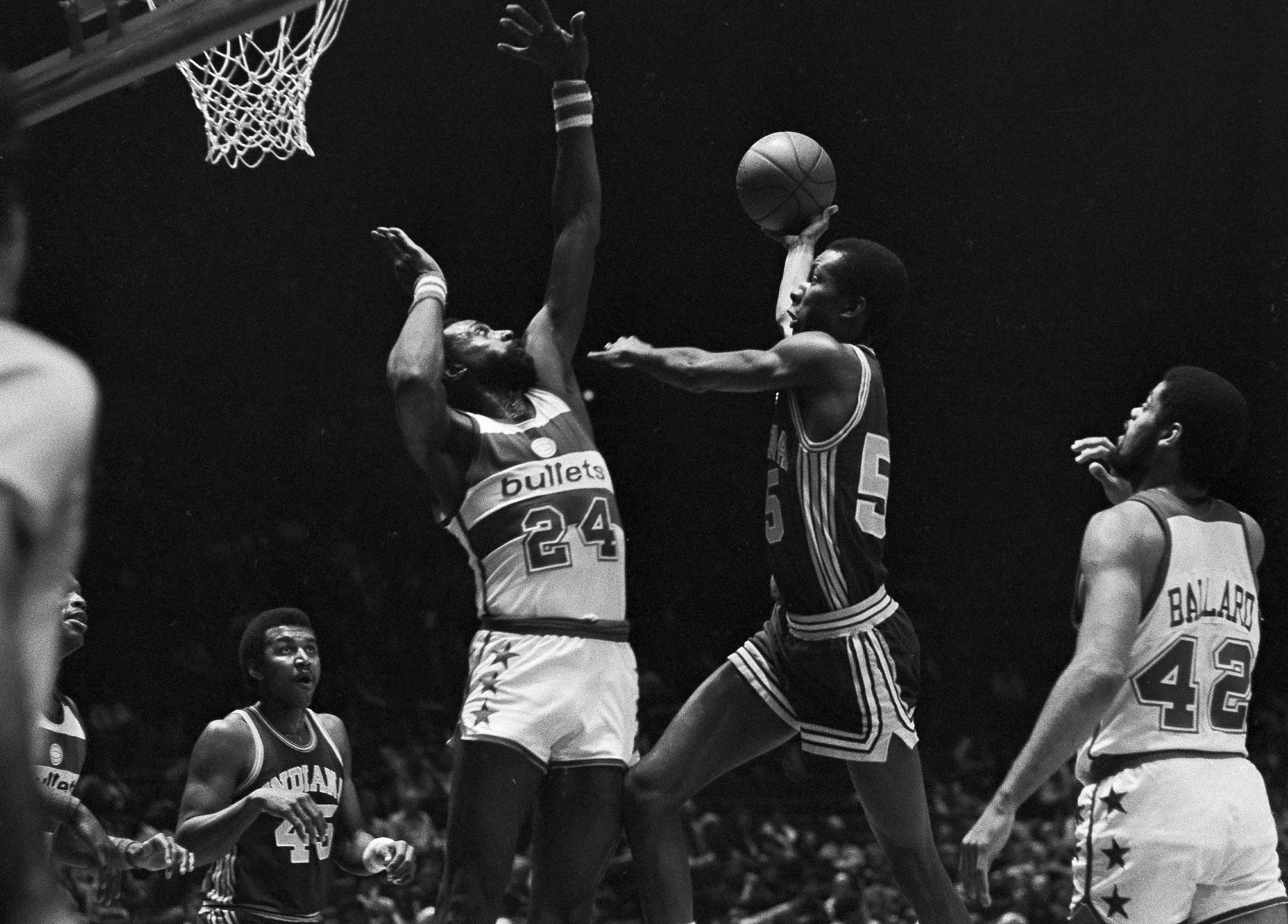 Spencer Haywood (24) of the Washington Bullets gets set to block a shot by Louis Orr of the Indiana Pacers during second quarter action at the Capital Centre in Landover, Md., Dec. 26, 1981.

In 1971, the entire Seattle SuperSonics basketball franchise was housed on the second floor of a nondescript office building on Thomas Street, astride the Coliseum (now KeyArena). The place was so folksy that, when my family visited to buy tickets to a future National Basketball Association game, the team’s general manager, Zollie Volchok, stopped by to greet us.

Suggesting we opt for a game against the Cincinnati Royals, Volchok said, “Then you will see our newest player.”

Volchok, who died in 1995, excitedly told us about Spencer Haywood. He was 6 feet 8, the star of the gold-medal-winning U.S. team at the Mexico Olympics in 1968 when just 18 years old. The previous season he was the leading scorer, leading rebounder, Rookie of the Year and Most Valuable Player in the NBA’s rival professional league, the American Basketball Association.

Haywood, his new general manager told us, was going to change everything.

In a rare slip, Volchok, who’d had a background in vaudevillian promotion, actually undersold the show.

When Spencer Haywood arrived in Seattle, he already had been drawn into the kaleidoscopic collision of sports, race and politics gripping the country. The 1968 Summer Olympics, the stage for Haywood’s basketball coming-out, also was where track stars Tommie Smith and John Carlos protested racial discrimination in the U.S. with a Black Power salute from atop the medal podium. Muhammad Ali was fighting his way back into professional boxing after being banned for refusing to be drafted into the U.S. military based on his religious beliefs, and his objection to the country’s role in the Vietnam war. Curt Flood, another African American, was waging a legal battle against Major League Baseball that would open the door to the introduction of free agency.

Haywood’s also was an issue about freedom – in this case, the freedom to play basketball for money at an earlier age than mandated by the lords of the NBA. And because the supply line for professional basketball was firmly sourced in American inner cities, the issue had a tinge of race to it as well. So Haywood not only was a harbinger of the individualized brilliance that seized the NBA, he helped create additional earning years for the barely-out-of-high-school African-American stars that proliferate in the game today.

For all of that, Haywood, now 67, will be honored on Wednesday with a proclamation at the state capitol in Olympia.

Hardship, of all things, was Haywood’s ticket to historical influence. He was one of 10 children of a single mother in Mississippi whose family made its way by picking cotton. That qualified him, under ABA standards, to sign with Denver after his sophomore season at the University of Detroit. However, the NBA had two reasons to challenge the Sonics’ signing of Haywood: First, the league did not allow players to be drafted or signed until their college classes graduated (Haywood’s had another year) and, second, many other teams coveted him, but were beaten to the punch by Seattle’s forward-thinking owner, Sam Schulman.

Haywood’s debut in Seattle, which we watched from middle-section seats that would cost a mint today, is a game memorable for reasons beyond the first sighting of the renegade superstar, who scored 30 points that day. The Sonics trailed the Royals by four points with only five seconds to play, but miraculously tied the game and won in overtime, 132-131.

The game became a rallying cry for me, my brother Mike and my best friend at the time, Jim Osmundsen. Whenever the outcome seemed hopeless for the home team and fans started abandoning the Coliseum, we’d yell in unison, “Remember Cincinnati!”

Jim and I attended almost every home game for several seasons, earning money for tickets by delivering The Seattle Times, which later provided my first job in journalism and where my first full-time beat was — true story — covering the Sonics.

As Volchok promised, Haywood changed everything. He blew my mind with his grace and an urban flair more openly embraced in the ABA. He had a lethal turnaround jumper, using his chest to clear space and extending his elastic arms into a high release point that was impossible to stop. Legend had it that he could take a quarter off the top of the backboard – and leave change before descending back to mortal men.

Haywood became an obsession for me. I taped to my bedroom wall the iconic poster of him leaning out of a phone booth while peeling his warmup jacket to reveal his Sonic jersey, Superman style. On the court, I changed my jersey number to match his No. 24. I copied the way he faced up his defender, bent at the waist, butt wagging, ball sweeping back and forth between spread legs. My friends started calling me “Glencer.”

I was a half-Asian kid who topped out at 6 feet, but Spencer Haywood gave me cause to dream, albeit impossibly.

After that first half-season in Seattle, Haywood reserved a place in sports history. His antitrust suit against the NBA progressed to the Supreme Court, which agreed that Haywood, because of family hardship, had the right to earn a living by playing basketball. The ruling opened the way for future wunderkinds to leave college early or skip it altogether, as did a later Sonic star, Shawn Kemp. None of the NBA’s past 10 MVP award winners, from Stephen Curry to LeBron James, Kevin Durant and Derrick Rose to Kobe Bryant and Dirk Nowitzki, played four years of college basketball.

Haywood’s second full season with the Sonics was one for the ages. He finished third in the NBA in scoring, with 29.2 points per game and averaged 12.9 rebounds — eye-popping numbers. Two seasons later, he helped lead the Sonics to their first-ever playoff berth.

By then, however, Haywood had tired of the team’s mediocrity. He asked out and was traded to New York, where the glamorous life devolved into drug abuse and a crumbling career.

His legacy, particularly his historic significance, only recently has enjoyed a resurgence; in 2015, he was enshrined in the Naismith Basketball Hall of Fame. At that occasion, he reminded, “It’s not like I only did this Supreme Court thing. I had some serious game.”

Seattle got the best glimpses of both. Haywood was our first real professional sports superstar, a truly historical figure to whom we have the largest claim. He carries such sway that, although Cincinnati no longer has a team in the NBA, we’ll always remember it because of him.