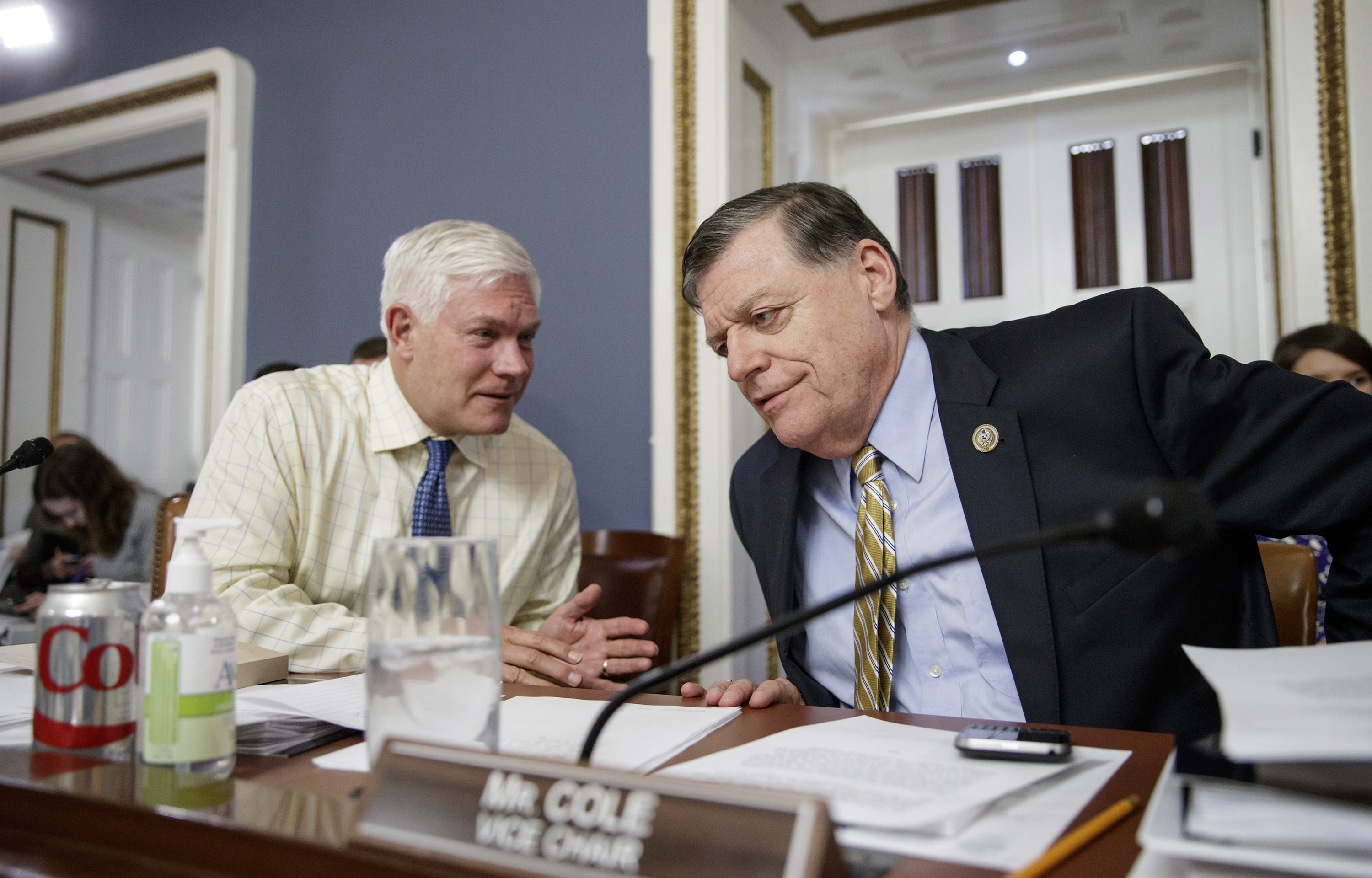 A version of this column originally appeared at TrahantReports.com.

In my writing about Indian Country, it would be easy to shape every column as doom and gloom, the logic of “Oh, what is that Trump going to do next?” But that won’t help the policy debates that are so important to Native Americans.

The fact is that Indian Country cannot afford to close the door to Republicans in Congress and in state legislatures, especially those Native Americans who have been elected to office and serve as Republicans.

There are at least at least a dozen Native-American Republicans serving in state legislatures (compared to 51 Democrats) in seven states. That list includes Alaska Sen. Lyman Hoffman, a Democrat, but he caucuses with the Republican majority and now serves as a chair of several committees and sub-committees. Hoffman is Yup’ik. In the Alaska House, Rep. Charisse Millett, Inupiaq, is now her party’s minority leader. 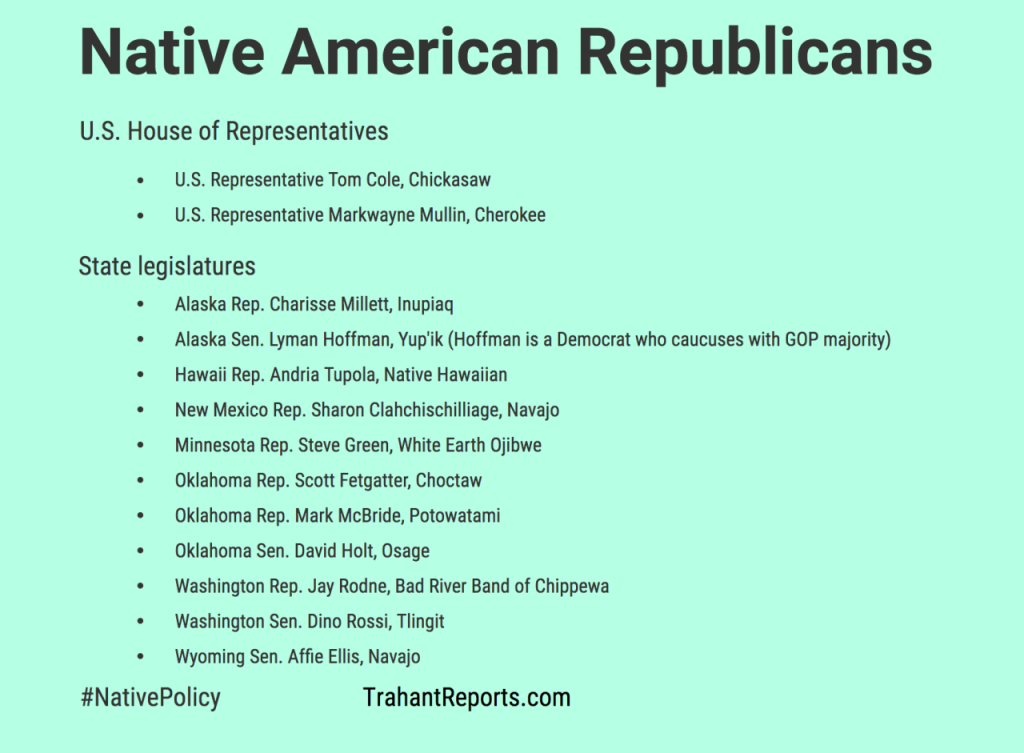 Not all the elected Native-American Republicans make tribal issues any sort of priority. Minnesota Rep. Steve Green, for example, does not include tribal membership in his biography or in his campaign literature. Yet his district includes the White Earth Nation.

However, most of the Native-American Republicans who are elected to office also engage in Native policy issues before state legislatures, including support for enhancing tribal languages, teaching Native history, expanding or limiting tribal jurisdiction, voting rights and, soon, state measures to shape the next version of health care reform.

One shared trait of the Native Americans who are elected as Republicans is support for fossil-fuel energy development. “As a local elected official, I am outraged that Indian Country is prevented from harnessing our own energy resources by ever-increasing regulations,” New Mexico State Rep. Sharon Clachischillage said in a Native Americans for Trump promotion. “The Trump Administration will ease restrictions on American energy reserves worth trillions of dollars. Together we will block the bureaucrats holding Native American businesses back and bring new jobs into our communities.”

But even the idea of energy development gets more complicated in Indian Country. As Sen. Hoffman reports on his biography page: “Every Alaskan deserves affordable energy. As a resource-rich state (oil, gas, wind and tidal), our state should, and could, harness all of this energy to benefit all of its citizens. I pledge to continue to work towards reducing the high cost of energy in rural Alaska.” Anyone who’s purchased gas in a village — topping $6 a gallon in Hoffman’s hometown of Bethel — gets that.

Many of these same communities, especially in rural Alaska, are at the global warming frontline, where more money will soon be required to build sea walls, fight more fires or even relocate entire villages. In his biography, Hoffman only cites the opportunity. “Our backyard is changing, opening new ventures, with the thawing of the tundra and the melting of the Arctic ice,” he writes. “It is my intent and my responsibility as your state Senator, to ensure our region participates …”

Montana Sen. Jason Small, Northern Cheyenne, ran for office against Sharon Stewart-Peregoy, a Crow, to spur reinvestment in coal. Small recently wrote in The Billings Gazette: “Thirty million dollars a year in lost royalties, hundreds of direct jobs lost, thousands of families out of work and out of options, entire towns destroyed, statewide economic ripples, and over $1 trillion dollars in stranded assets, not necessarily because of market forces, but directly attributable to a political agenda. That is what we face in the current and unprecedented assault on reason and Montana’s economy in what has been dubbed ‘the War on Coal.’”

Market forces will be a test of this notion. Can pro-coal Republicans legislate the revival of the coal industry? Coal prices did surge after Trump’s election, at one point topping $110 per metric ton, but have since declined to about $83.50 per ton. Since the election, at least one major power plant, the Navajo Generating Station near Page, Arizona, has been marked for closure in two years. The utilities that own the generating station say the low cost of natural gas is their primary reason for closing the plant. That is what economists mean when they talk about market forces.

It’s easy to find the issues where Native American Democrats and Republicans disagree, but there are areas of common ground.

It was Rep. Cole who helped champion the reauthorization of the Violence Against Women Act in 2013, including the provisions for tribal jurisdiction over non-Indians. Tribes still have a lot of work to do to implement that law. Deborah Parker, former vice chair of the Tulalip Tribes, and a key supporter of the act, said tribes should get their codes ready now to comply with the law. Too few tribes have taken that step and VAWA will again require reauthorization in 2018, so Indian Country has to present its strongest case for this Congress.

One example of a Native American issue that cuts across party lines is unfolding in Wyoming. House Bill 76, dubbed Indian Education for All, would require the state’s schools to educate all children about the history and economic contributions of the Eastern Shoshone and Northern Arapaho tribes.

Sen. Affie Ellis was just elected in November and is a co-sponsor of the legislation. A Navajo who grew up in Wyoming, she told the Casper Star-Tribune that Native-American students sometimes are threatened by verbal abuse during sports trips across the state. “It’s a really important first step to understanding each other a little bit better,” she told The Star-Tribune. “It’s a brief idea, and I think it’s a fitting one.”

At the recent Conservative Political Action Conference or CPAC, Ellis spoke at a panel titled, “Rising Stars in the Conservative Movement.” Back in Wyoming, her appearance generated both praise and criticism.

Later, asked if she was a “sane Republican alternative” to Trumpism, Ellis told the Planet Jackson Holenewspaper: “I think our country needs so desperately some thought and some well-researched responses … There are so many times when it’s easy to name-call and have these cute hashtags that stick, but we have to have strong facts and start communicating those facts in a very effective way. I think the hard part is the devil in the details of policy you’re working on doesn’t fit into small hashtags. Maybe we just need long hashtags.”

I don’t know about longer hashtags. The one I use, #NativePolicy, is short. But we certainly need more thoughtful, complex policy debates.