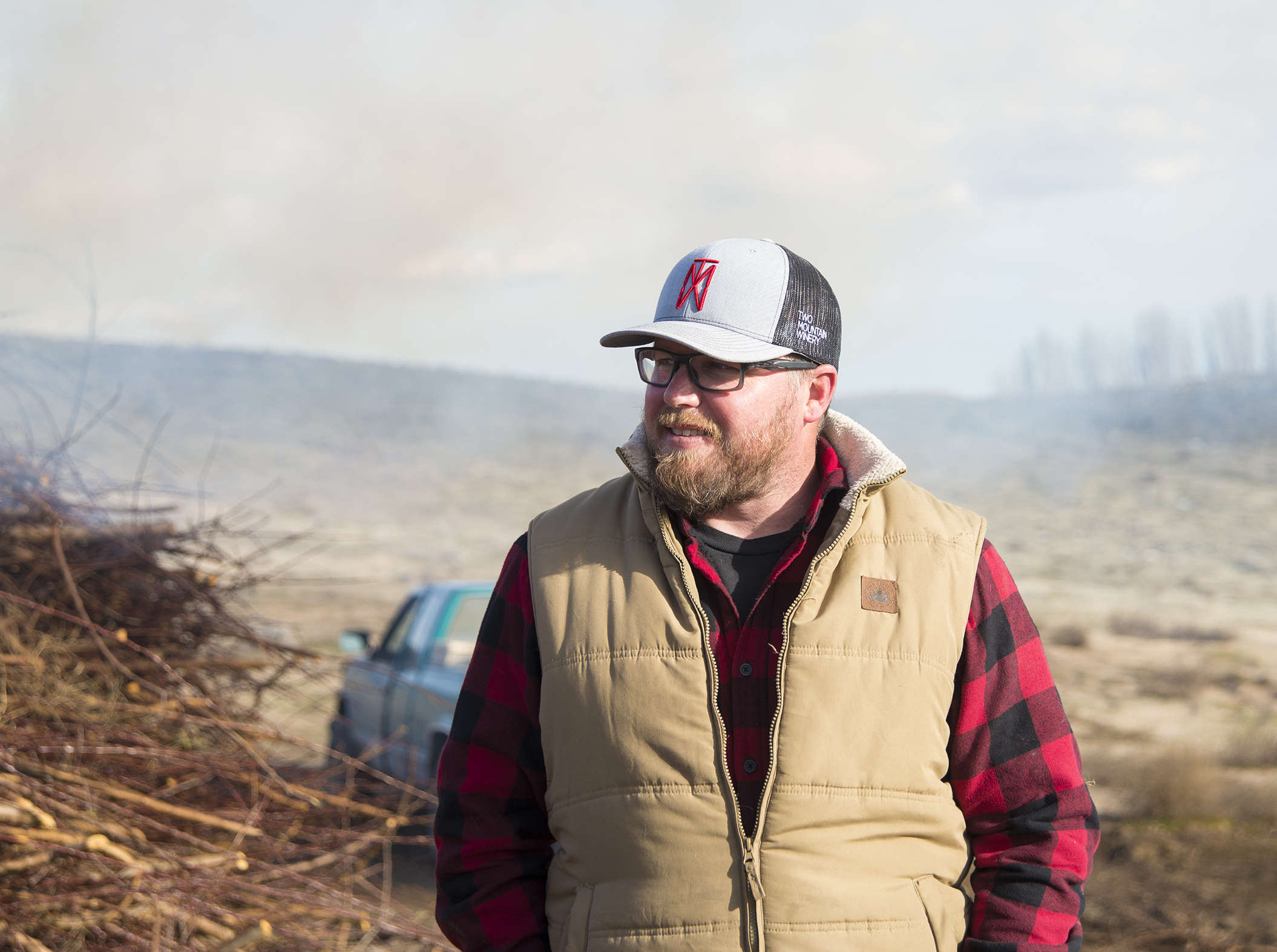 Orchardist Phil Doornink, 37, voted for Trump. He hopes the new president will make good on his promise to reduce government regulations.

In the Yakima Valley, nestled east of the Cascades, the fruit trees are waking up. Signs along State Highway 24 advertise openings for “piscadores,” or harvesters. At the Doornink Fruit Ranch in Wapato, expert hands prune hundreds of acres of cherry, apricot, pear and apple trees.

Phil Doornink represents the fifth generation of his dad’s family to grow tree fruit. He and his wife, Karen, call themselves professional gamblers. They worry about the weather, the bills, the fruit. They worry about getting enough workers and paying everyone fairly. They wonder where the next new regulation will come from and how much it will cost. Or which of their neighbors will be next to pack it in and sell their land.

And now they wonder about Donald Trump.

Like many farmers in the state, the Doorninks voted for Trump. While Trump didn’t talk about ag policy during his campaign, farmers liked his broad promises to cut federal regulations.

But Trump’s ideas about immigration seem out of touch with the demands of the nation’s agriculture industry. Orchards up and down Central Washington, from Okanogan to Benton County, rely on Latino workers whose documentation status covers the spectrum. Trump’s promise to build a wall along the U.S.-Mexico border, and crack down on immigration broadly, could shake the industry to its core.

Doornink says orchardists are already seeing a shortage of farm workers this year. Those who are here, busy readying orchards for the season, feel anxious amid executive orders and hostile rhetoric on immigration, illegal or otherwise.

“With any new administration, whether it’s Democrats or Republicans, we always get nervous about what’s going to happen in the following years,” he says. But this year is especially tense.

Tree fruit growers approach Trump’s ideas about Mexico and immigration with a mix of skepticism and fear.

“Traditionally, both parties have left immigration alone,” says Mike Omeg, a cherry grower in The Dalles, Oregon. “Republicans ... they didn't’ want to have a negative effect on business. But now with Trump, there’s a new kind of approach to immigration that’s not a traditional Republican approach. And it’s really scary. I think farmers don't know how to handle it.”

Many farmers seemed to be banking on the belief that Trump wouldn’t follow through, Omeg says. But if his ban on travel from six predominantly Muslim countries is any indication, the new president may well make good on his promises.

“I think folks in agriculture are really just looking and seeing what he’s going to do next,” he says.

Jabin Green, who grows pears and cherries at an orchard down the hill from the Doornink ranch, says Trump will face too much opposition to follow through on any drastic plan regarding migrant workers.

“I’m apprehensive about what’s next, but have trouble believing we’ll start rounding people up,” Green says. He voted Libertarian in the election. “I don’t know if I’d recognize that America, but I have a hard time believing that’s where we’re headed. I hope it’s not where we end up.”

Any “deportation scheme” that targets agricultural workers would devastate the tree fruit industry, says Christian Schlect, president of the Northwest Horticultural Council, which lobbies at the federal level on behalf of growers and shippers in Idaho, Washington and Oregon.

“There’s a lot of labor that’s needed. We don’t find that labor in the domestic pool right now,” Schlect says. “We’re certainly trying to follow what the president is going to do in terms of immigration enforcement.”

In particular, the council is looking to see whether the administration takes a new stance on how employers verify workers’ immigration status and how it approaches the guest agricultural worker program, called H-2A. The industry wants the U.S. Department of Labor to fix the program, which they see as unaffordable and unreliable. The council also supports creating a path to legal status for undocumented workers.

“It’s important that the people right now that don’t have complete documentation that are working, good people … they need to be allowed to stay in the country,” Schlect says. “Not immediate citizenship but maintain their status — continue working, being productive.”

To the Pacific Northwest’s Congressional delegation, this is old hat. But Trump’s still-forming administration needs educating, Schlect says. “Meeting with and getting the new administration up to speed on this issue is going to be a big priority of all U.S. agriculture, not just our industry.”

The Doorninks, for their part, haven’t given up hope that the new president will provide some relief.

The duo works in an office in Phil’s grandparents’ old house. His parents live there now. It sits on top of a hill with a panoramic view of the ranch. From the carpeted bedroom filled with a couple desks and a work table scattered with paperwork, they can see acres of squat fruit trees.

Phil didn’t plan to take over the ranch. After college, he opted for an active career in the military, which turned into a desk job. He escaped back to the ranch about a decade ago to spend more time outside. But it turns out there’s paperwork in agriculture, too. He convinced Karen to give up her career as a teacher to take over the office work. After eight years back, feeling the need to show Phil’s parents their commitment, they bought their own orchard next door. They dream of growing to 600 acres.

Phil is quick to sympathize with his workers, whom he calls family. “We’re going to do everything we can to be sure our guys are taken care of,” he says. But he feels strongly that to take care of them, he has to be able to afford to keep the farm.

“If anything, I’m hoping this new administration will make it easier for a small family farm to keep their heads above water. We had a January that was packed full of meetings with new policies and regulations we have to follow,” he says. “A lot of family farms — sole proprietors — they looked at each other and said, ‘We can’t do this anymore.’ A lot of people are looking to sell.”

Madi Clark, an agriculture policy analyst at the Washington Policy Center — a conservative think tank in Tri-Cities — says growers aren’t exaggerating when they complain that federal rules are burdensome.

“Right now, my whole concern and what people are holding their breath for is what will happen and what regulations will be scaled back,” Clark says of the new administration. “We’ve been promised that there will be some relief.”

In January, President Trump signed an executive order requiring agencies to lift two regulations for every new rule they put in place. At the end of February, he started dismantling Obama-era Environmental Protection Agency rules that farmers opposed.

Karen Doornink says all they can do is stay informed. Rules come at them from everywhere, including agencies, legislators and court rulings.

“You prepare, and then adapt to survive,” she says. “And if we don’t, there won’t be a sixth generation.”