When free speech is hate speech: Should it be banned? 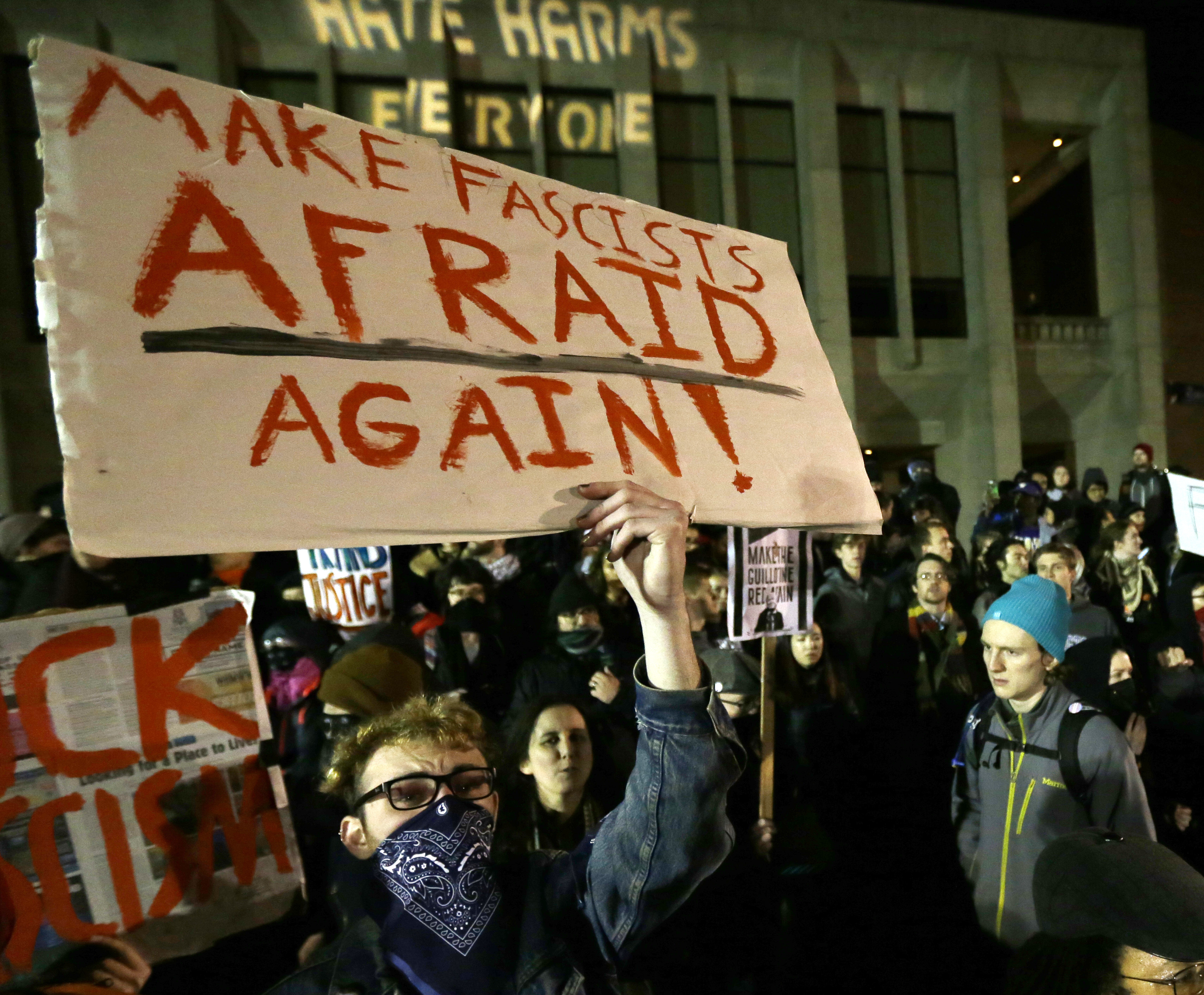 A protester holds a sign that reads "Make Fascists Afraid Again!" during a demonstration in front of Kane Hall on the University of Washington campus where far-right commentator Milo Yiannopoulos was giving a speech, Friday, Jan. 20, 2017, in Seattle.

On a recent Civic Cocktail — a monthly interview program on The Seattle Channel — journalists had a chance to ask University of Washington President Ana Mari Cauce and Washington State University President Kirk Schulz about free speech on campus — and it was a subject both seemed eager to talk about.

On Inauguration night in January the UW hosted a controversial right-wing provocateur, Milo Yiannopoulos, and the resulting demonstration resulted in an anti-fascist protester being shot. WSU avoided such controversy, thanks to the weather: Yiannopoulos’ appearance was cancelled due to snowflakes.

It certainly made for a provocative discussion with the Civic Cocktail panel, which included me and the Seattle Times’ Katherine Long. The host and chief interviewer on the program is longtime journalist and pundit Joni Balter. (Crosscut was a media sponsor of the event.)

Yiannopoulos, who was an editor of the far-right nationalist news website Breitbart, has since been widely discredited for remarks he previously made where he seemed to condone man-boy child abuse (he is himself an abuse survivor). As a result of the furor over his comments, he quit his post at Breitbart and a major book contract for his memoir was cancelled. Yiannopoulos, known for his hateful trolling, had become a free speech martyr for speech no one wanted to defend.

The question lingers: Should Yiannopoulos have been allowed to speak on campus? He was the guest of a recognized university group and they can invite whomever they like. But as a video of his UW appearance demonstrates, he gave a rambling, crude and generally unprofessional performance, ideology aside. Was this worthy of the space, time and resources of public universities of the stature of ours? Couldn’t his views have been presented in a more professional or scholarly manner?

When asked, both university presidents doubled down on their commitment to free speech. Period. Either or both could have nixed Yiannopoulos’ appearance but chose not to. Cauce described what happened outside — the shooting of a demonstrator — the UW event as “incredibly tragic,” and said she felt lucky that the young man who was shot survived. She said she wasn’t sure if the UW could have done differently in the contentious circumstances surrounding the talk.

In defending the self-described provocateur’s appearance, she said, “This is not the moment to try and parse free speech,” citing these times when speech and the press are being challenged. “This was not someone who wanted to engage in civil discourse and the truth is freedoms can be abused and he’s someone who’s done that.”

I had a question for both presidents that was rooted in local history. In 1934, the president of Washington State College (now WSU) told the German consul in Seattle that he could not come on campus to promote the agenda of Adolf Hitler. The diplomat, Walther Reinhardt, had been going around the state touting the “New Germany” and denying that there was any anti-Semitism there. But the college’s longtime president, Ernest Otto Holland, drew the line at promoting Nazism. He did not want the campus used to spread Third Reich propaganda. Isn’t it OK to set some standards?

WSU’s Schulz said he was uncomfortable being a free speech arbiter. “I still … think it’s very difficult … to start deciding, me personally, who’s OK to speak and who’s not OK to speak.” He said he thought the best way for students to make opinions known about a speaker was “with their feet,” meaning not giving them the attention they’re seeking or countering the message with peaceful protest.

Cauce added that she had confidence that UW students would not invite someone who was “avidly Nazi.” Given that many anti-Yiannopoulos protesters consider themselves anti-fascists, the definition of what constitutes “avidly Nazi” might differ.

The good news for free speech advocates is that both university presidents have essentially said that anything goes speech-wise on campus. I took their comments as setting a very high bar for censoring the views of campus invitees.

The bad news is that the standard for speakers isn’t very high. There’s no requirement that they add coherent substance to debate or engage in civil discourse.  That to me seems to surrender some of the responsibility of institutions that are supposed to be about “higher learning.”

I think the stand Washington State's president, Ernest Otto Holland, took in 1934 would be considered anti-free speech by current university presidents' standards. In the 1930s, many Americans were avidly buying Nazi propaganda, also widely accepted by the media. Part of the consequence: World War II and the Holocaust.

I find it very difficult to say that Holland was wrong in denying Nazi Germany a bully pulpit.