Black Student Union is back at Rainier Beach 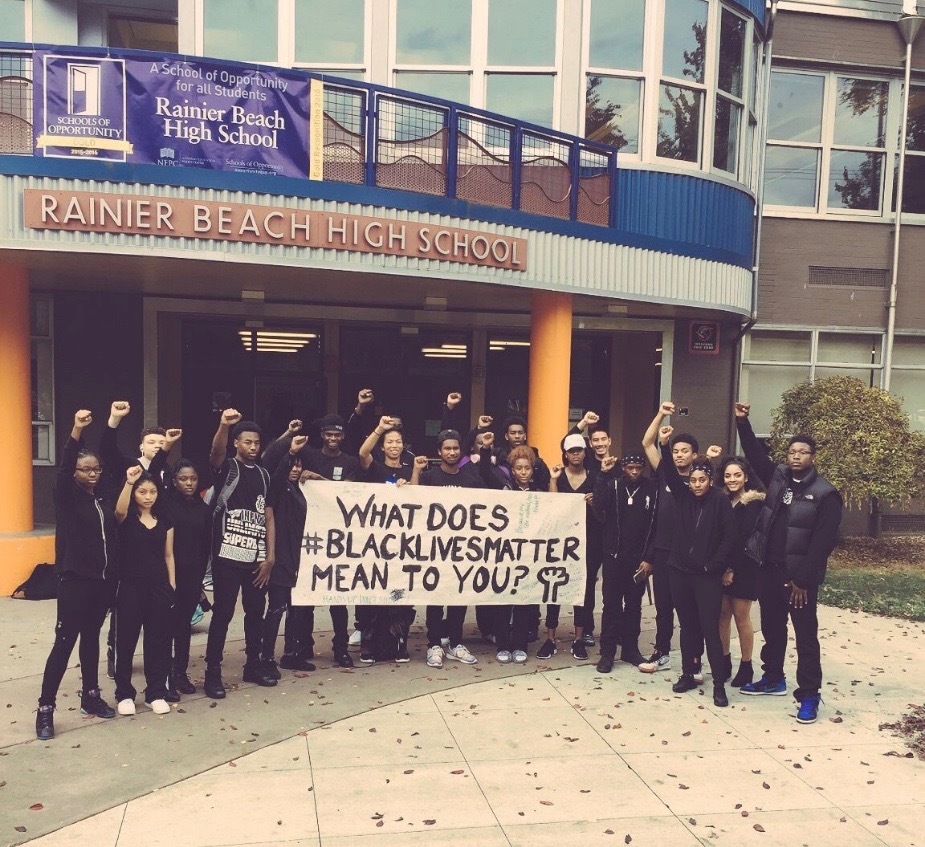 While taking a leadership class at Rainier Beach High School, Grace Williams was looking into potential groups to lead or start. A black student union — something Beach didn't have — was on a list of two dozen possibilities.

“We were looking into the Black Lives Matter movement at the time,” says Williams, a junior. “Many students supported that group and so we wanted to bring it together.”

Now, for the first time since the start of the 21st century, the Black Student Union is up and running at Rainier Beach.  The school, which is made up predominantly of students of color from diverse backgrounds, hadn’t had a Black Student Union group since one disbanded in the 1990s. Indeed, the school's activity coordinator, Angie Thomas, remembers wondering, “How could we not have a BSU?" Nobody at the school now knows exactly why the group disbanded and never got going again until now, especially in a city with a rich history of African-American student activism.

Thomas, who had been an active force behind Chief Sealth High School’s BSU while on the faculty there, has been impressed by the Rainier Beach students’ drive and efficiency in organizing the club. “All school clubs have to have a constitution, and the BSU had theirs drawn out within two meetings,” she says.

The meetings are completely student-led and meticulously organized. Students sit in a circle and have comprehensive conversations on various topics that they select beforehand, such as the presidential election or police brutality. Finger snapping to signal agreement after someone speaks shows solidarity. Students hold intelligent, critical discussions that don’t lead to arguments. “We don’t bash anybody’s opinion,” says Williams.

“Having a BSU is important because it provides a safe haven for black youth to have a place to heal,” says senior Zion Thomas, and after the election of Donald Trump, that need for a safe haven felt more necessary than ever to the students. “I was on the Canadian website when it crashed,” junior Beria Heyman says with a laugh. “But when [the election] happened, it hit me. At that moment, I felt that America was no longer for me.”

But, instead of sitting around in shock, the students mobilized. Zion Thomas and fellow senior Wanjiku Kamau organized an independent walkout the day after the election. It was 100 percent student-led and the leaders met with school administrators and the police beforehand to make sure everything would run smoothly.

“About half the school was involved and the police were very cooperative,” says Jerrell Davis, an adult adviser for the group. “Everybody even came back in time for [a] college fair afterward.”

“It was a big success for the school,” says senior Tresean Luvias. “Students were showing their support and people were reciting poems. It was very uplifting,” Zion Thomas says, “As a student, as a youth, as a queer black person, I felt like I have a movement.”

According to King County Councilmember Larry Gossett, life isn’t much easier for black youth now than it was in the late 1960s when he was a founding member of the University of Washington’s Black Student Union and helped to establish BSUs in local high schools, including Rainier Beach. He recalls that at the time, very few white people saw the need for specialized attention to black people or black youth. “People would say, ‘We don’t have any [race] problems in Seattle,' ” he says. “It’s really difficult to get white people to understand the privilege they have, and it’s even more pronounced now that Trump is president.”

Kamau says that she doesn’t know how to talk to her brother, who recently arrived in the U.S. from Kenya, about race relations in America: “How do I explain to him that he can’t do some things? I don’t even know where to start.”

The club hasn’t done very much work with the outside community yet, but they’re planning to. Faculty adviser Thomas says she would like to see the students partner with other like-minded organizations to strengthen and empower the students to be activists.

Race is a difficult topic to talk about, says Williams, “but at the end of the day, we still have to be positive.”