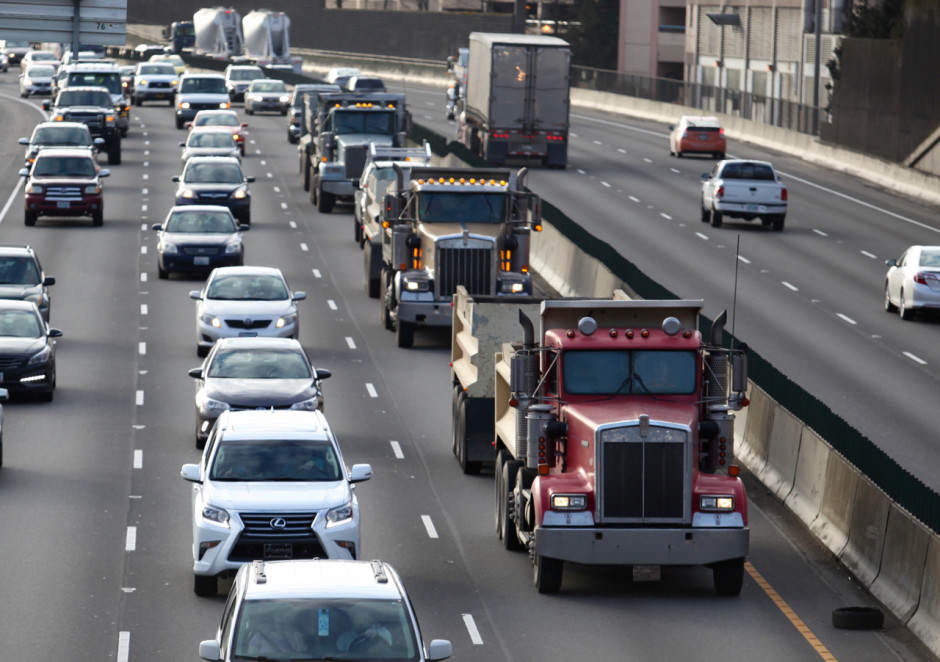 Oregon and Washington are expecting to receive around $185 million to spend on replacing old diesel engines through a settlement with the automaker Volkswagen.

The decision by automaker Volkswagen Group to cheat on diesel emissions tests means Oregon and Washington are in line for big payday.

The states plan to turn millions of dollars from the company’s settlement into cleaner air by replacing dirty old diesel engines.

But some say the money presents a golden opportunity not just to upgrade some old trucks, buses and construction equipment, but to start phasing them out altogether.

Oregon lawmakers are considering a bill this session that would link the settlement money to new regulations that crack down on diesel emissions.

The difference between a dirty old diesel truck and a new, clean one is up to 95 percent less pollution coming out of the exhaust pipe.

“You can actually see it,” said Gary Holland, president of NESW Trucking in Portland. “A lot of the older trucks will have gray smoke coming from them. At some of the ports, you see 50, 60, 70 trucks at a time. It’s like a cloud that you see.”

By tapping some clean diesel grant money, Holland paid half price to replace four of his old diesel trucks with new ones.

Thanks to the Volkswagen settlement, Oregon and Washington will have around $185 million to spend on replacing old diesel engines – enough to eliminate the gray clouds coming from thousands of trucks.

That’s good news because the soot that makes that cloud is toxic, according to Kevin Downing, clean diesel coordinator for the Oregon Department of Environmental Quality.

“Diesel exhaust – primarily we’re talking about the particulate or the soot – is actually a known human carcinogen,” he said. “This is in the lung or bladder cancers.”

“So it affects basically all the systems in the body,” Downing said.

Essentially, the particles in diesel exhaust are so small that they can weasel their way past the body’s natural defenses – and they bring other toxins with them.

“They penetrate deep into the lungs,” Downing said. “They are, in fact, a particle but they act like a gas at that size so they’re capable of moving through the lung into the body.”

One study found both mothers and fathers who are exposed to diesel exhaust at work pass along an increased risk of brain tumors to their kids.

The diesel you breathe

EPA data show more than 90 percent of the population of Oregon and Washington are living in areas with elevated cancer risk from diesel pollution.

Linda George, a professor of environmental science at Portland State University, led a study that tested for diesel particulate in Portland’s air.

She found the levels of diesel particulate downtown were 10 to 20 times what the state deems healthy to breathe. They’re noticeably higher near roadways, she said, and they spike around construction sites, where the levels were 50 to 60 times safe levels.

“Not many people are standing right next to a construction site,” George said. “But when you have construction sites all over the city, it creates this kind of mass of diesel particulate matter that we’re all breathing at elevated levels.”

‘There’s nothing that can say diesel did this’

For years, Jim Serrill rallied supporters of Portland’s professional soccer team, chainsaw in hand. He was known as “Timber Jim.” But his full-time job trimming trees for utilities put him working alongside diesel trucks and wood chippers day in, day out.

“It was very acrid, you know, being in that stream of exhaust,” he said. “And I had no clue it was really a problem.”

When he was diagnosed with prostate cancer, he started doing some research. Doctors removed his prostate along with a tumor near his bladder. He suspects diesel exposure is to blame.

“I asked my doctor to retrieve all my tissue and have it analyzed, but there’s nothing that can say diesel exhaust did this,” said Serrill, who’s now cancer free.

When he went back to work, Serrill refused to use diesel equipment. But he noticed a warning sticker on the side of his old wood chipper that noted the machine is known to cause cancer in the state of California.

“They outlawed those machines in California,” he said. “Guess where they came? Oregon.”

Newer diesel engines filter out almost all of the toxic soot before it leaves the tailpipe. That’s why California has already started banning older engines. But right now, there’s nothing to keep those engines from migrating into Oregon and Washington.

Oregon state Sen. Michael Dembrow says Volkswagen settlement money will only address a fraction of the state’s diesel problem. The Portland Democrat is backing a bill in the Legislature that would use that money as part of a larger plan to phase out older engines entirely.

For diesel trucks, the dividing line between old and new is 2007 because that’s when the EPA’s stringent new emissions standards kicked in. For most off-road construction equipment, cleaner engine requirements started around 2014.

“One of the things we want to do right away is stop firms from adding older engines to their fleets,” Dembrow said. “If you buy a truck that’s post-2007, all of those risks related to heart disease and cancer, et cetera just plummet, and that is great. It means we have the solution in front of us.”

His bill banks on using Volkswagen settlement money to help replace old engines – especially those in school buses that put children at risk. It also looks to raise more money for upgrades through a 1 percent charge on state contracts.

Supporters say it’s the perfect time to crack down on diesel – when there’s money to help.

“For the first time ever, really, Oregon has money to put on the table to deal with this problem,” said Mary Peveto with the advocacy group Neighbors for Clean Air. “With the kind of carrot we have to offer it has got to be tied to definitive standards for diesel engines in our state and a feasible timeline to get to that standard.”

Both Oregon and Washington thus far have relied on a voluntary system of providing grant funds to help replace old engines.

But Downing said after spending around $8 million in federal money and $700,000 in state funds that strategy has only delivered about 1 percent of the emission reductions the state needs to reach reduce the cancer risk from diesel pollution to one in a million. The state still needs to cut diesel pollution by more than 85 percent to reach its public health benchmark, he said.

Since 2007, Washington has put $28.5 million in state money toward buying new diesel engines and reduced diesel emissions by 45 percent from 2005-2014.

While the plan relies mostly on voluntary grant funding, he said, starting next year the ports of Seattle and Tacoma are restricting the trucks serving them to 2007 and newer models.

Dembrow said the hardest part of reducing diesel emissions is the fact that diesel engines are built to last.

“So, our challenge becomes how do we get companies to quicken up their replacement of those older diesel engines and replace them with newer engines?” he said.

The trucking industry is wary of new regulations given the six-figure price tag of new diesel engines, and construction businesses are outright opposed to following California’s lead, saying it will be too costly for their industry.

Dembrow’s bill aims to set a deadline for phasing out older engines. He says as it moves through the Legislature, lawmakers will have to pick a date that gives businesses enough time to adapt.

Right now, he said, “we’re somewhere between right away and never. So, we need to figure out what we’re going to do there. There’s still a lot of negotiations that have to happen.”

For Holland at Northeast Southwest Trucking, the new rules would eventually mean replacing four more of his older trucks in Portland. He said getting money from the state to help with those costs will be key.