Emerald Skies over the Emerald City

Last year on Mother’s Day, something amazing happened while Seattleites were asleep. The Northern Lights appeared over the city with the most spectacular light show seen in over a decade. It’s not a common experience in the Seattle area, particularly at this time of year. But in case they come back this year, here’s a primer on the northern lights. If they don’t make an appearance, there are other options on where to see the spectacular ribbons of light in the sky.

History of the Aurora

Previous generations looked at the kaleidoscope of colors in the sky and thought they were the ghosts of their ancestors, giant hunters, or foxes kicking snow into the sky. Here’s a history of aurora sightings:

Now we know that electrons from the solar winds interact with nitrogen and oxygen atoms 20–200 miles above the Earth to create the mesmerizing spectacle. And although we understand the science behind the beauty, the northern lights still inspire stories and wonder. 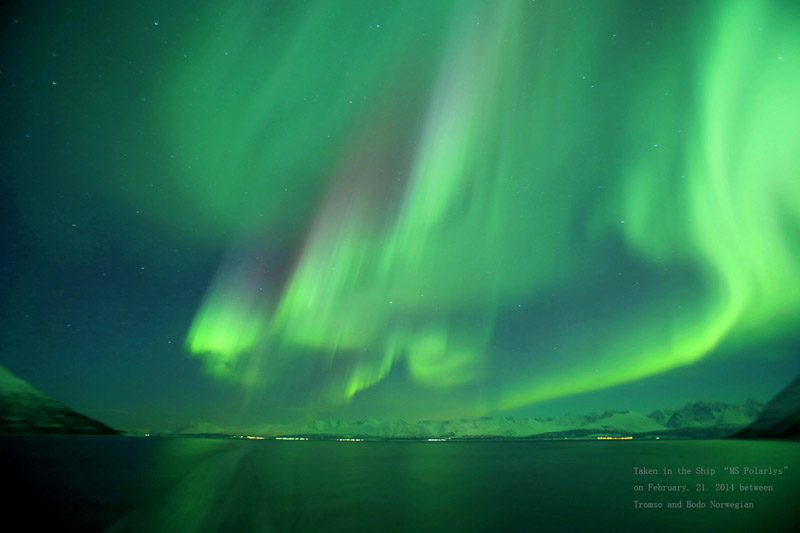 The Science of the Aurora

Today, the story of the northern lights is one told by science. It starts at the center of our solar system where the sun releases solar winds moving at nearly one million miles per hour. As they reach earth and interact with the magnetosphere, highly-charged electrons and protons in the solar winds collide with atoms of oxygen and nitrogen between 20 and 200 miles above the north magnetic pole. That interaction “excites” the atoms, and as they “calm down” they emit photons, small bits of energy in the form of light. Enough collisions result in enough light for the eye to see. Meanwhile, the shifting of these magnetic and electrical forces moves the display across the sky. The result? Ribbons of brilliant colored lights dancing across the heavens.

The sun is the foundation for the display – its magnetic fields curve and contort as it rotates on its axis, and these fields become entangled to create sunspots. From these sunspots, particles from our bubbling, boiling parent star can escape, and when they do, they cause solar winds that spew these electrically charged particles toward the Earth’s atmosphere, where magnetic forces pull them toward the North and South Poles. The energized particles form a magical light when they collide and interact with gases in the Earth’s upper atmosphere, and create and release energy in the form of radiant, dancing lights about 60 miles overhead. The aurora is at its most active up two days after a burst in sunspot activity, which tends to cause a more vigorous and brilliant show. The electromagnetic radiation creates undulating ribbons of light that vary in shape, strength, and color. The colors displayed reflect the types of gases that the energized particles are interacting with – when they meet with oxygen, they form green and yellow. Purple, red, and blue are often spurred from collisions with nitrogen.

How to See the Northern Lights

In case the aurora doesn’t appear in Seattle any time soon, you can still chase the light. One of the best places to see the northern lights is a Hurtigruten cruise along the northern coast of Norway between October and March.

While its counterpart aurora australis resides in the Southern Hemisphere, the aurora borealis is most visible from the Northern Hemisphere in latitudes close to the Arctic and in the dark polar night with little light pollution. The dazzling lights are contained in what is known as the auroral oval and are at their most brilliant when directly overhead. (From farther distances, they appear more like a faint glow that, while beautiful, do not do justice to the stunning phenomenon.) Winter at around midnight is typically the best time to see the lights, as low levels of light pollution during this season lend themselves to clearer skies. While the best time to view the northern lights is fairly easy to predict, it’s important to keep in mind that only nature can determine the precise time that the phenomenon will occur. Factors such as clouds and high fog can also hinder one’s ability to catch a glimpse of the famed northern lights.

One of your best chances of experiencing the northern lights is on a winter Hurtigruten cruise in the dark polar night in a remote area. Hurtigruten is so confident that we have issued a Northern Lights Promise for their 12-day Norway coastal cruises that start in October and end in March. If the northern lights don’t occur during your voyage, we will send you on a 6- or 7-day voyage the following season. This is a great way to experience the magic of the northern lights while you enjoy a comfortable journey along 1,500 miles of rugged Norwegian coastline.