Dear Scott Pruitt, you're making a mockery of the EPA 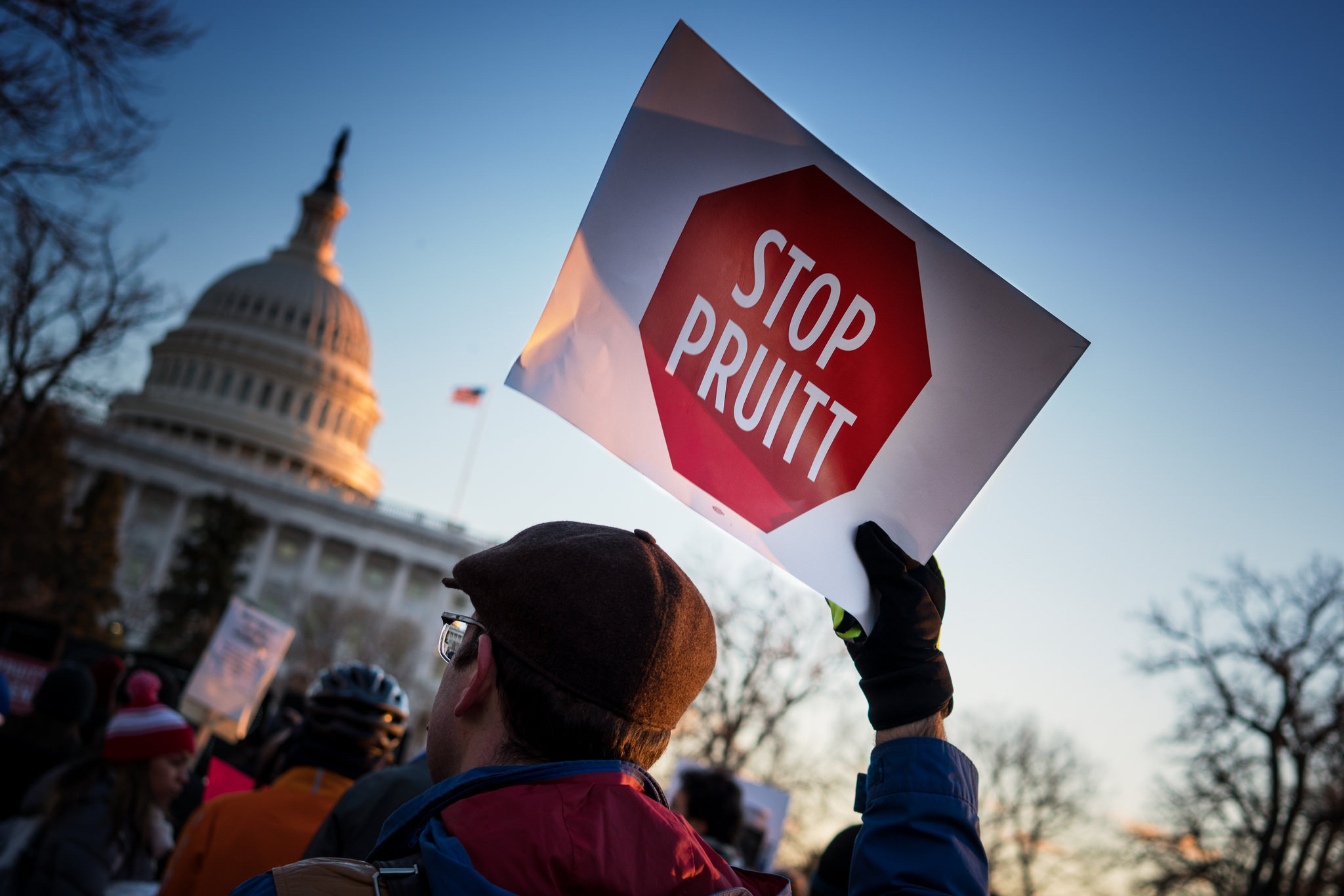 A February march in Washington, D.C.

Editor's note: When Michael Cox left the Environmental Protection Agency last week after more than two decades with the agency, he couldn't resist a few parting shots. Cox, who worked for the regional office in Seattle, wrote a letter to the agency's top administrator, Scott Pruitt, lambasting new directives under President Donald Trump. Trump has proposed deep budget cuts to the EPA. Pruitt's comments rejecting climate change science have drawn a formal ethics complaint. Cox's letter, which first drew the attention of KING 5, is below.

Dear Administrator Pruitt, My name is Michael Cox. Today is my last day after working at EPA for over 25 years. I am writing this note because I, along with many EPA staff, are becoming increasing alarmed about the direction of EPA under your leadership. I understand there are people in the country who distrust EPA, and think we are overreaching our mission. I believe we need to listen to those voices and try to make changes where warranted.

However, I, and many staff, firmly believe the policies this Administration is advancing are contrary to what the majority of the American people, who pay our salaries, want EPA to accomplish, which are to ensure the air their children breath is safe; the land they live, play, and hunt on to be free of toxic chemicals; and the water they drink, the lakes they swim in, and the rivers they fish in to be clean.

I assume you are aware of the current low morale of EPA career staff. I have worked under six Administrations with political appointees leading EPA from both parties. This is the first time I remember staff openly dismissing and mocking the environmental policies of an Administration and by extension you, the individual selected to implement the policies. The message we are hearing is that this Administration is working to dismantle EPA and its staff as quickly as possible. I have highlighted several areas below which are emblematic of why morale at EPA is the lowest since I started in 1987.

1. Denying Fundamental Climate Science: This strikes at the core of the concerns from EPA staff. It was surprising, no shocking, when you stated on National television that carbon dioxide is not a primary contributor to climate change. This is settled science and we have too many other important scientific issues to investigate related to climate change to waste our time debating this issue. I am reminded of a Congressional hearing several years ago when Congressman Henry Waxman asked the CEOs of the major tobacco companies if smoking caused lung cancer. All of the CEOs categorically denied that smoking caused lung cancer. We know, of course, that was not true. You will continue to undermine your credibility and integrity with EPA staff, and the majority of the public, if you continue to question this basic science of climate change.

We are seeing the effects of climate change on the landscape right now. If you do not believe me, travel to Alaska during your tenure and talk with the Alaskans whose way of life is being fundamentally changed because of climate change; visit the Pacific Northwest and see where the streams are too warm for our salmon to survive in the summer; visit the oyster farmers in Puget Sound whose stocks are being altered from the oceans becoming more acidic; talk to the ski area operators who are seeing less snowpack and worrying about their future; and talk to the farmers in Eastern Washington who are struggling to have enough water to grow their crops and water their cattle. The changes I am referencing are not impacts projected for the future, but are happening now.

It was encouraging that the President did not withdraw from the Paris Climate Agreement. However, the message from the President’s other actions sends the signal to the rest of the world that the USA is no longer a leader in reducing greenhouse gas emissions and moving to a clean energy economy. You are correct that we do not need to choose between jobs and environmental projection. The question is what jobs? Are they jobs to move us forward to a cleaner energy economy or backwards to a dirtier fossil fuel economy?

Your statement that “we got a bad deal” in the Paris Climate Agreement highlights another case where you have not done your homework. The Paris Agreement, while not perfect, was a huge step forward in battling climate change and moving the world in the direction of newer cleaner energy technology.

Fortunately, there are other global leaders, including China and India, who understand the urgency of the problem and are taking action. Domestically we have Governors, Mayors, CEOs, and Tribal leaders who will fill the void created by the lack of Federal leadership. They will take on the task of reducing greenhouse gases that are causing warming and put in place actions that will make their communities more resilient from climate change. And they will do this while their communities continue to prosper.

2. “Our Big Day Today”: The email headline that greeted EPA staff on Tuesday March 28th was “Our Big Day Today.” The question many of us had was who is “our” referring too? Was it the many EPA career staff that worked for years developing the work that was rescinded or revoked? Was it the EPA career staff that should be jubilant the President came to EPA to poke a finger in our eye (or as many people indicated to give us the finger)? Was it the fossil fuel industry that will benefit most from the President’s action? Or was it the coal miners present at the event who are being given false hope their jobs are coming back?

We were frankly insulted that the President would come to EPA to announce that he is overturning the work to battle the most urgent environmental problem of our generation – climate change. It was beyond comprehension that an Administration could be so arrogant and callous.

3. Giving False Hope: The President is right that we need to help the coal miners who have been displaced and help retrain them for the future. The President is, however, wrong that coal jobs will be coming back after the repeal of the climate change actions. To state otherwise is false and misleading. It is amazing that an Administration that touts itself as business savvy has not done its homework on the market forces at play with coal.

The number of people employed in coal production in the USA has been declining since the high point in 1925 when over 860,000 people were employed to the current low point in 2017 with about 77,000 people are employed (U.S. Department of Labor). The steady decline in employment in the coal industry happened, in general, as coal production increased. The cause of the decline was simple: automation, not job killing regulations.

According to coal companies themselves, the decline in production of coal in the USA will not be reversed to any great extent. There are no major new coal plants coming on line and the price of the most common replacement fuel, natural gas, will continue to decline with the advent of new production. Even if there is an increase in coal production, the number of jobs associated with the increased production will be small due to the automation of the industry.

4. Indefensible Budget Cuts: We were told that you tried to advocate for a smaller reduction in the EPA budget, yet in the end, the budget passed back to OMB had even deeper cuts. The clear message to EPA staff was either you supported the additional cuts or you have little to no influence with the Administration.

We would appreciate a more detailed description of why you are recommending that certain EPA programs be reduced or eliminated. We would love to know, for example, why resources for Alaska Native Villages are being reduced when they are presented with some of the most difficult conditions in the country; why you would eliminate funds for the protection and restoration of the Puget Sound ecosystem which provides thousands of jobs and revenue for Washington State; and why you would reduce funds for a program that retrofits school buses to reduce diesel emission exhaust inhaled by our most vulnerable population - children. To be credible you need to provide details why you believe these programs should be reduced or cut.

5. Appointing Political Staff Who Are Openly Hostile to EPA: We were surprised and dismayed when it was announced that the new EPA Chief of Staff, and several other staff, had worked for Senator Inhofe. As you know, Senator Inhofe is one of the harshest critics of EPA and the most vocal climate change denier in Congress. This sends an unmistakable and disturbing message to EPA staff that you have no intention of engaging with EPA staff and working together to accomplish what Congress and the American people have entrusted us to do.

6. Continuing to Demonize EPA: You have had several speeches and interviews over the past several weeks where you continue to demonize EPA, and by association EPA career staff. This has to stop. Criticizing the organization you lead is not the type of leadership that will produce results. As a leader, you need to motivate and inspire your staff. The course you are on will continue to alienate EPA career staff; the same people whom you need to accomplish your agenda and fulfill the expectations of the American people.

You have talked about paying attention to process and rule-making. You are right. However, your remarks that EPA has not been paying attention to process or rule-making are not consistent with the experiences of many EPA staff, me included. I can provide you with dozens of examples, in Region 10 alone, where we have participated in extensive public engagement with states, Tribes, communities, and industry. These types of statements indicate to us that you and your staff do not understand the fundamental work we do at EPA.

8. Please Step Back and Listen to EPA Career Staff: If, by some miracle you or your staff actually read this note, I can only hope you take a step back and realize that you are the leader of an organization of very hard working, dedicated professionals who believe deeply in their work. America is a world leader in protecting our citizen’s human health and our environment. Do you really want your legacy to be the person who led the rollback and reversal of the amazing gains we have made over the past 40 years?

I understand the challenges you face when going up against ideologues that appear to cherish fulfilling campaign promises more than doing the analysis and evaluation of what makes sense. But, we are counting on you to advocate for EPA. Unfortunately, up to this point, we have no evidence of this.

Good luck and just remember that EPA staff will respond to leadership that takes into account the science and the opinions of individuals who have devoted their entire lives to fulfilling the mission of EPA — to protect human health and the environment. We understand that our positions may not always prevail, but please take the time to listen to expert voices that might differ from yours and your immediate staff. You may be surprised that you can find common ground on many issues. The health of the American people and our country depends on you.