Ex-mayor McGinn leaps in to race against Ed Murray 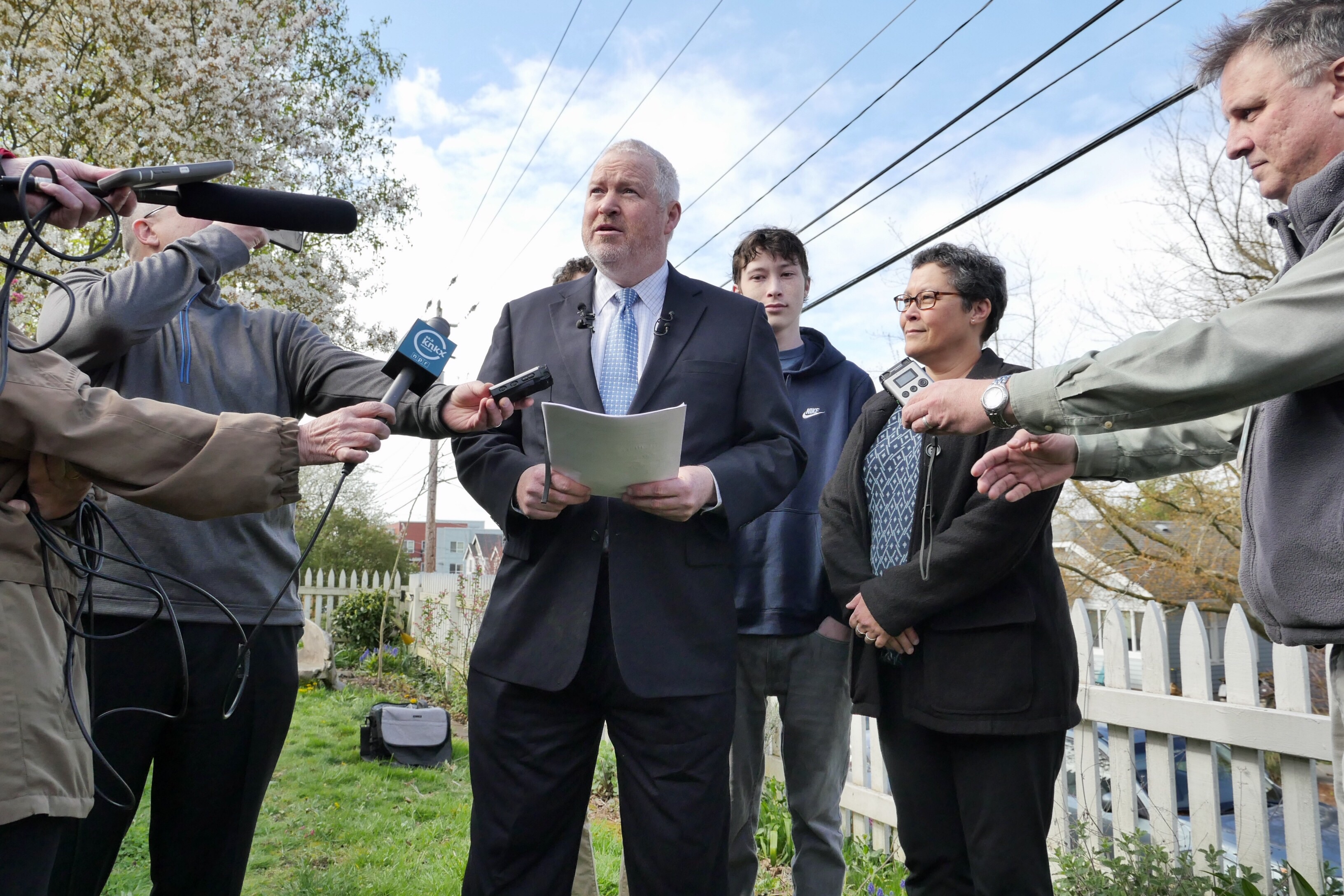 Former Mayor Mike McGinn announcing he will challenge Seattle Mayor Ed Murray. He addressed the media outside his Greenwood home, with his wife Peggy Lynch and two of their children.

“Keep Seattle.” Those two words have catapulted former Seattle Mayor Mike McGinn back into the public eye as he announced another run for head honcho in City Hall.

"Seattle was a promise. It's a promise that we can do better. I believe that promise is threatened," McGinn said at a press conference outside his Greenwood home Monday morning.

"Every time the rent goes up, it doesn't just squeeze out who is here. It squeezes out our dreams for who our city can be."

The bike-loving man known occasionally around town as “Mayor McSchwinn” served one term from 2010 through 2013 before losing to current Mayor Ed Murray with 47.5 percent of the vote to Murray's 51 percent. As a relatively unknown Sierra Club advocate, his election was notable in and of itself — a pre-Trump “outsider” politician.

While his term was celebrated by the urbanist, environmentalist, activist community, it was also remembered by some as a period of tension inside City Hall between the mayor in his office upstairs and the Seattle City Council in theirs below.

Most notably, McGinn was skeptical that an agreement with the Department of Justice was the best way to reform the Seattle Police Department.

He was also famously opposed to the waterfront tunneling project, a stance for which he was ridiculed at the time. He’s been vindicated on that front, to a certain extent, as the cost overruns for Bertha he warned of have come to pass.

McGinn’s candidacy, while the subject of barroom speculation ever since Murray's close victory in 2013, never seemed like an actual possibility. But the salacious accusations against Mayor Murray two weeks ago that he sexually abused children in the 1980s have made his once seemingly inevitable reelection look shaky. Murray has denied the allegations and has vowed to continue his reelection campaign.

Asked repeatedly how the allegations against Murray influenced his decision to run, McGinn deflected. While he acknowledged he'd been monitoring the political landscape, he said, "I'm trying to avoid talking about the mayor's legal challenges." It would not be a campaign point for him, McGinn said.

In a sign of how seriously Murray takes McGinn's entry, the Murray campaign issued a press statement in the middle of the former mayor's press session. Attacking McGinn's record, the statement said, "Mike McGinn's divisive and confrontational style led to years of paralysis, dysfunction, and infighting at City Hall. As mayor, Mike McGinn picked fights with everyone under the sun."

Before Monday, Murray had eight other challengers. Lawyer and community organizer Nikkita Oliver was regarded as the most likely "serious" contender. What this means for Oliver is a bit of a question; she and McGinn overlap on some of their more aggressively lefty stances on things such as criminal justice reform. Many of the attendees at Oliver's kickoff campaign earlier this month were McGinn voters in 2013.

It also did not go unnoticed that McGinn is another middle-aged white-guy in a city that has not had a woman mayor since 1928. Oliver, by contrast, is a 31-year-old woman of color.

McGinn answered this by saying only that it was a legitimate issue for voters to consider.

McGinn took his announcement as an opportunity to get detailed, outlining his stances on affordable housing, police reform, homelessness and taxes. In short: More community involvement on each, McGinn's attempt to contrast his style with Murray's penchant for task forces.

According to one person close to the former mayor's campaign, early polls apparently suggest McGinn's got more than a fighting chance.