Foster care 'on the cheap' -- Washington's recipe for failure

Help has become harder to get for Washington foster children and their caregivers in recent years. 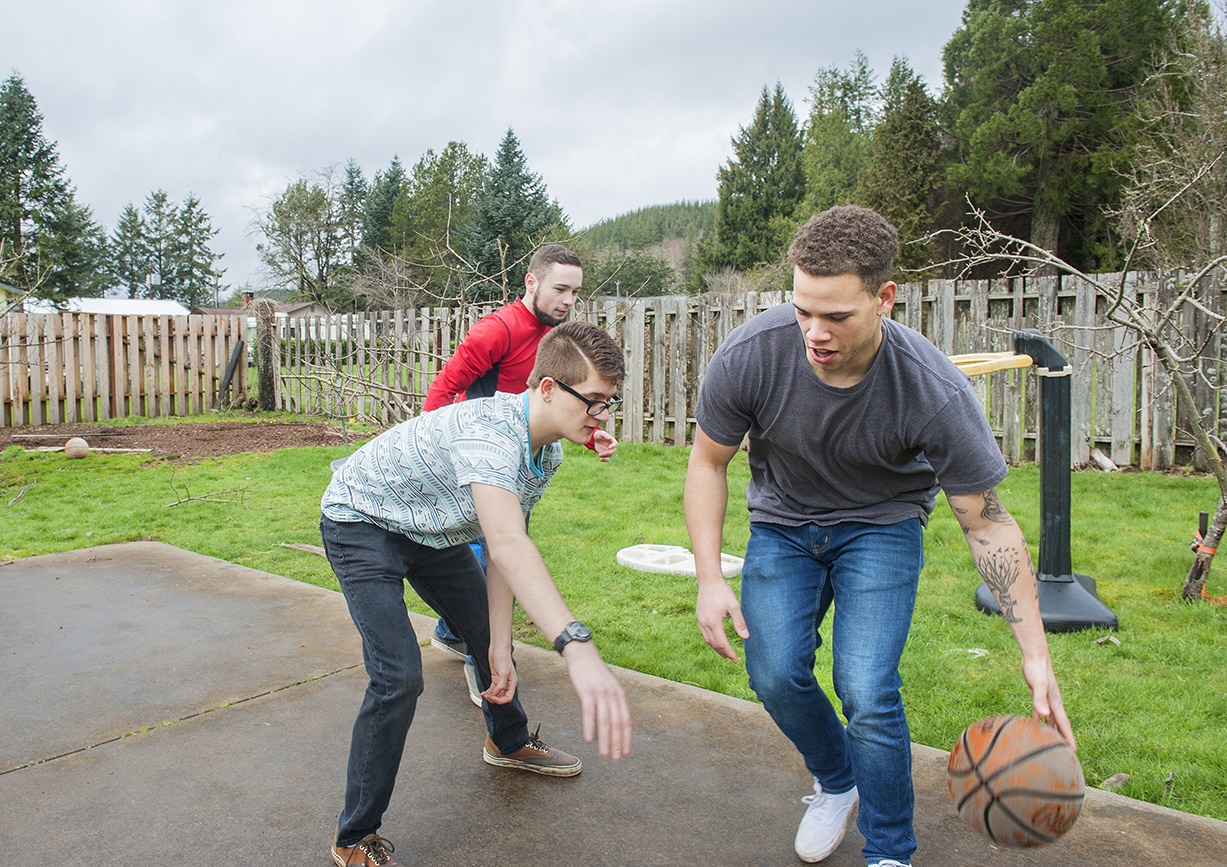 Jamie Floch’s 8-year-old foster son, Austin, was having one of his near-daily meltdowns, where he would lash out in anger, break things or even hit his older brother.

The boy had landed with Floch and her husband after running away from his eighth foster home since entering care around age 5. Determined to give him some stability, Floch called the private agency that had placed Austin with her. “I need help,” she told them.

Three workers from the agency, Community Youth Services in Olympia, left a meeting to rush to Floch’s Aberdeen house, where they spent hours with the family. The organization arranged to have a counselor work with the family in their home, sent a tutor to help with schoolwork, and at one point even sent the Flochs away for a weekend break.

A therapist once confided to Floch that, despite her best efforts, there was a good chance that Austin would wind up in prison. That’s the fate of many former foster youth, who as adults are incarcerated at rates nearly eight times that of the general population.

Austin didn’t become part of that statistic. Now 20, he’s a junior at Eastern Washington University studying communications. His goal, he said, is to become a police officer.

Without all the extra support, “there’s no way he could have been OK,” said Floch, who has fostered 11 children and adopted three boys, including Austin, over the past decade and a half, on top of raising her own three kids and a nephew. “There’s no way we could have helped him ourselves. It takes more than just a mom and dad for children who have experienced such devastating things. They need help, big help.”

Big help has become harder to get for Washington foster children and their caregivers in recent years.

A recent report by the Children’s Administration shows how many of the highest-needs foster children in its custody are falling through the cracks. The state faces a perpetual shortage of foster homes, and options to care for children with severe behavioral, mental health and medical challenges are stretched even thinner. As a result, children can wait up to two months to get the sort of intensive help Austin did through programs the state calls behavioral rehabilitation services, or BRS.

These high-needs children are often the ones who end up sleeping in hotels and state offices, sometimes for weeks at a time, as a joint InvestigateWest, KCTS 9 and Crosscut investigation found last fall. Others are placed with ill-prepared and poorly supported relatives and foster parents. And a growing number of youth — about 50 in any given month — are shipped to out-of-state facilities, according to the department. All that adds up to greater instability for youth who are most in need of it.

This “placement crisis,” as agency leaders and lawmakers have taken to calling it, has largely been the result of insufficient and unpredictable state budgets, the report says.

In the wake of the Great Recession, the Legislature cut the foster care budget by nearly one-quarter, to $155 million. Despite modest increases in recent years, funding and case worker levels remain below pre-recession levels.

The Children’s Administration has been making policy decisions based on what it can afford, not on what kids and families need, said Dee Wilson, who worked for the department for 26 years and now trains social workers. “In every way possible, policymakers are attempting to operate a foster care system on the cheap,” he said. “Thus the current state of foster care in this state.”

The report “has highlighted how our funding scheme for child welfare is really broken," said state Rep. Ruth Kagi, a Seattle Democrat who chairs the House Early Learning & Human Service Committee. She requested the report, which was released in February, to help lawmakers understand options and costs for addressing gaps in care for the highest-needs foster children.

Kagi sponsored a bill (HB 2008) that aimed to stabilize child welfare funding by setting the budgets for behavioral rehabilitation services, child-protective services and court-ordered parental visitation based on a forecast of the number of children and families needing those services. Without such automatic adjustments, services have been squeezed as caseloads grew but funding and worker numbers stayed flat or fell.

The legislation passed the House but is likely dead for this session after it failed to move out of a Senate committee by a Tuesday deadline. Kagi said she hopes to keep some of the bill's provisions alive as the Legislature moves into budget negotiations. Both chambers have put forth budgets that include funding for more facilities and other options to house high-needs foster children, but they remain far apart on a number of proposals.

The recent Children’s Administration report shows how costly behavioral rehabilitation services can be: The state spends a total of nearly $160,000 for the average child who needs behavioral rehabilitation services, compared with about $22,000 for a child who does not. Only about 7 percent of the 8,500 children in foster care receive BRS, either in Washington or out of state. Yet tending to those high-needs youth consumes about one-third of the agency’s $172 million budget for out-of-home care.

With their steep price tag, these services were a prime target for budget cuts after the recession. On top of cutting the foster care budget by nearly $50 million, legislators in 2009 stopped basing the BRS budget on a forecast of caseloads, as the state does for most other social services. That meant the department effectively had to ration services.

Private agencies that provide most behavioral services saw their reimbursement rates slashed, and many reduced the number of children they served or shuttered their programs altogether.

As a result, fewer of the most troubled children and their birth and foster families get the intensive help that could hold them together. Since 2009, the total number of children who receive behavioral rehabilitation services annually has fallen by almost 44 percent, to fewer than 1,000 a year, according to figures provided by the Children’s Administration.

Putting fewer children in behavioral services was done “mostly as a cost-cutting measure,” said Wilson, who worked at the University of Washington School of Social Work and Casey Family Programs after retiring from the state. “This means that lots of children and youth who would have been in BRS a decade ago are being cared for at greatly reduced rates” in regular foster homes or with relatives.

Private agencies who work with BRS kids get up to $7,546 a month for a child’s care under standard rates, and out-of-state BRS facilities can cost the state $15,000 or more a month. By comparison, regular foster care reimbursements range from $562 to $1,505 a month. Placing children with relatives generally costs the state even less, since most are unlicensed and so don’t receive the reimbursements that licensed foster parents get.

Living with relatives is often better for children, and nearly half of foster kids are now placed with kin. But in some cases the state appears to be turning to relatives due to a shortage of other options, rather than because it’s best for the child.

Placing troubled youth with relatives and licensed foster parents ill-equipped to handle them often backfires. The children get shunted from home to home, and frustrated foster parents drop out of the system.

Challenging kids “are going to sometimes brand-new foster parents,” said Beth Canfield, who fostered for 32 years and co-founded the Foster Parents Association of Washington State. “That’s one way we lose a lot of homes — they get a kid that has behaviors that they have no clue how to address."

Earlier interventions might have helped some of these children before their problems became so severe, the Children’s Administration report suggests.

The families of children getting behavioral services often had prior brushes with child protective services. More than 17 percent of youth in BRS had been removed at least once before, compared to 6 percent of those never in BRS, the report found. Their caregivers also had faced significantly more reports of abuse or neglect.

When children are “ignored or dealt with poorly in early CPS investigations,” that can lead to intractable behavior problems, said Wilson, the Children’s Administration veteran. “This is the cost of inadequate responses to chronic neglect and chronic maltreatment.”

That helps explain why, even after getting intensive services, many of these children struggle. Nearly half of youth in behavioral services ran away at some point, and about one-third spent some time in detention, the department found. They also got moved around more, and were less likely to reunite with their families or to be adopted than youth who had never been in BRS.

The proposed new Department of Children, Youth and Families, which would take over the state’s child welfare functions, has a mandate to focus more on intervening before children are taken away from their parents. The House and a Senate policy committee have passed bills authorizing the new department, but fulfilling that mandate will mean finding money for expensive new prevention initiatives in future budget cycles.

Even with adequate and stable child welfare funding, the state needs to expand its options to care for high-needs foster children, the Children’s Administration report says.

It recommends increasing the number of facilities that can take children for up to 30 days after they first enter care, a time when they are more likely to be put up in hotels or bounced between short-term foster homes. The proposed House budget includes $4.6 million for such emergency placements. Likewise, the Senate is considering a bill (SB 5890) that would set aside money for assisting foster parents and increasing placement options.

State Rep. Kagi, the Seattle Democrat, said she’s also seeking a budget proviso, based on another recommendation from the report, that would study whether vacant state facilities could be converted to provide BRS services run by private agencies.

But some advocates and private agencies think putting more children in facilities is the wrong way to go. Those funds could be spent more effectively on intensive supports for birth families and specially trained foster parents, they say.

“You don’t need bricks and mortar, you just need people and funding,” Brian Carroll, president and CEO of Secret Harbor, a private agency that provides BRS services, told the House Early Learning & Human Services Committee last month. Put the $15,000 a month it costs to send a child out of state into helping the family for a few months, “and you can build something pretty strong,” he said.

Recognizing that the system needs more foster parents who are willing and able to take children with the most severe problems, the report also suggests exploring options for creating a cadre of salaried, “professional” foster parents.

Fixes will not come cheap, the report warns. Developing “cost-neutral solutions is extremely challenging, if not impossible,” it says.

But wringing additional large sums for foster care out of the state budget will be challenging this legislative season.

In Aberdeen, foster and adoptive mom Jamie Floch said she wants legislators to know how the state’s investment in her three boys made it possible for them to grow into “amazing adults.”

This story was supported by grants from the Fund for Investigative Journalism, the Satterberg Foundation and the Thomas V. Giddens Jr. Foundation.

InvestigateWest is a Seattle-based journalism studio focused on the environment, public health and government accountability. To receive alerts about future stories, go to www.invw.org/newletters.