The Murray case: Is the media getting played? 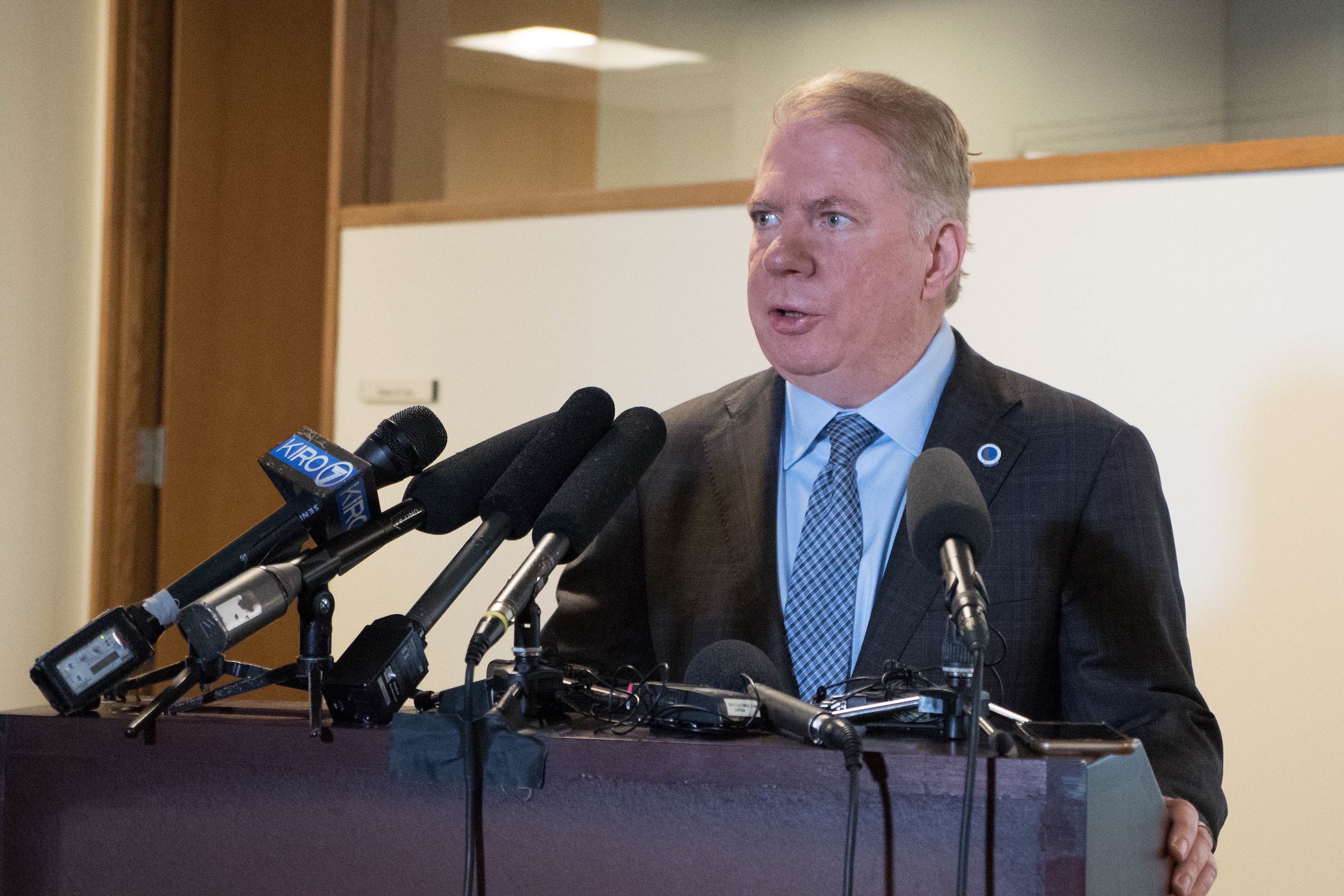 At a press conference, Mayor Ed Murray denounces the charges against him.

There is no pretense of due process in the case against Mayor Ed Murray, at least in terms of politics. The stakes, then, of using local media to swing public opinion in one direction or the other are as high as they can be.

Both sides of the fight — Murray and the legal team accusing him of sexually abusing a teenager in the '80s — have simultaneously derided and fully participated in the daily news cycle.

The suit against Murray is less than four weeks old, but two story lines, in particular, already stand out. For Murray, it's the publication and fierce defense of an op-ed on his behalf. For his accusers, it's dragging backroom rumors about Murray into the public eye:

Three days after Christmas 2016, Crosscut received an anonymous tip from, apparently, three employees of the Seattle Police Department. “Did you ever hear the story about the Seattle Mayor who called the Chief of Police to get a man out of his house — who refused to leave?” said the author of the email, using a fake name. “It was during pride weekend a couple years back.  [Mayor] Ed [Murray] wanted it handled quietly.  And so it was.”

It was a rumor, one that other media outlets and city hall insiders had also heard. But it didn’t lead anywhere — the sources were unable to provide more evidence or even show that they were, in fact, employees of SPD. Glances at police reports turned up nothing. Further whispers remained just that: whispers. So the possible story fizzled, as political rumors often do.

Four months later, the tale has returned, now folded into the lawsuit against the mayor from a man named Delvonn Heckard, who has made the allegations — forcefully denied by the mayor — that Murray sexually abused him as a teenager. The story of this “cover up” that had already made the rounds in the police department and city hall was now couched in a subpoena from Heckard's attorneys for Murray’s campaign manager, Maggie Thompson.

Screenshots of police dispatch screens accompanying the subpoena filings show the mayor had, in fact, called the chief over Pride weekend, as the original source had said, though it was actually in 2016, not a few years back.

What was less clear was how this call related to the earth-shattering sex-abuse allegations against the mayor. If this person in the mayor’s house was somehow connected to Heckard or was somehow further evidence of alleged sexual abuse, the new filing did not say how. Julie Kays, an attorney for Murray’s accuser, only pointed to the value of testimony by Thompson — who was at the mayor's house when the police arrived — and what she might say about the abuse allegations as justification. “The truth is always relevant. The Mayor's veracity is relevant and we will fully explore it through witnesses, like Ms. Thompson,” she said in a statement.

But according to several lawyers who have no ties to the lawsuit, if the accuser’s attorneys wanted to subpoena Ms. Thompson, they did not need to file it in court. Further, if the attorneys felt she had relevant information to the sexual abuse case, they could have given her a subpoena without the cover-up story.

“It appears to me as though the attorneys for the accuser are filing papers in court, like subpoenas, that don’t need to be filed, and usually are not filed," said Andrew Kinstler, an attorney with Seattle law firm Helsell Fetterman. "Deposition subpoenas, for example, do not have to be filed and usually are not filed in the public court record unless there is a dispute about the subpoena that requires court intervention. It appears as though documents are being filed in court in this case just so the media picks up the information."

The end result was a story that has bumped around in the city for months, without finding traction, became a matter of public record and suddenly a news item that nobody reporting on the story could ignore.

Murray's lawyers asked the court to sanction Kays, arguing they were misusing the court filing system to their advantage. "This litigation is still in its infancy — unless stopped, [primary lawyer] Mr. [Lincoln] Beauregard will continue to subvert the litigation process by disregarding the civil and local rules and Rules of Professional Conduct by continuing to misuse and abuse the Court system for his own improper use,” read a motion from Murray's team.

Beauregard responded, telling the Seattle Times, “They’re angry because the truth is getting out. There’s nothing at all illegal or improper with us filing documents with the court, that’s ridiculous. All they’re trying to do is change the narrative against the mayor, and they’re actively trying to intimidate us as lawyers from making a public record so you as the media can’t read it. That, if anything, is illegal.”

On the other side is Murray's well-known penchant for defending himself personally. While his tendency to call reporters has subsided in recent years, people who have covered him in the state Legislature or City Hall are more likely than not to have heard directly from Murray when he's displeased with coverage.

It's no surprise, then, that he would want to appeal directly to readers, using his own words.

Minutes after an April 12 Seattle Times editorial called on Murray to stop running for re-election, the mayor’s crisis management team reached out to the Times to ask if they could have their own op-ed run side-by-side with the Times’ editorial in the print paper the following day. Editorial Page Editor Kate Riley told Murray spokesperson Jeff Reading that the deadline for the next day’s paper had passed, but that she would consider an op-ed for a future edition. “But I expressed a concern about the mayor not making himself available for an interview with reporters and [that he] declined two invitations from the editorial board [to talk],” Riley said in an email to Crosscut. “I reiterated I was happy to look at anything they wanted to send us. So, I offered two times to consider an op-ed.”

That Murray had not sat down for an interview was a concern shared by the reporters who worked on the original story as well. In a later Facebook post, Times investigative reporter Lewis Kamb wrote, "I would entirely support the general practice of not allowing a public official to dodge the new[s] side's questions and simply run straight to the op-ed pages to make his or her case with a crafted statement that avoids any journalistic scrutiny."

After Riley made her concerns known, the paper never received a submission. “The next thing we saw was that the Stranger published the article attributed to the mayor,” she said.

According to Reading, “The op-ed hadn’t yet been written when I reached out to Kate and, as you indicated, was not subsequently submitted to the Times when it was finalized, given her concerns.”

When asked if they hadn't submitted the op-ed because Riley wanted the mayor to answer questions, Reading added, “The Mayor has and will continue to answer reporters’ questions about the allegations against him in the time and manner of his choosing — not under terms dictated by another party.”

When the mayor did publish the op-ed in the Stranger, he did not sit down for an interview with the paper. Tricia Romano, the Stranger's editor-in-chief, said in an email, "We decided that running the op-ed would be in the public interest, leaving it to the readers to make up their own minds. Before the op-ed ran, we published an in-depth interview with one of his accusers, Jeff Simpson and afterward, we published a response from Simpson."

But the op-ed's contents were not appreciated by some, mostly because of its aggression toward the Seattle Times and his statement that his accuser’s “criminal history proves he cannot be trusted.” Danni Askini, head of the Gender Justice League, called on the mayor to step down in response. Michael Maddux, a former city council candidate and politically engaged citizen, wrote that it filled him “with sadness, rage, and other feelings that are indescribable.” Crosscut’s Joe Copeland wrote of the mayor’s statement, “It’s the type of thing that comes so close to discouraging other victims — real victims, if you want to concede the mayor his innocence — that The Stranger editors could properly have asked for a revision, giving the mayor the option of saving his line for an after-midnight Twitter posting.”

Whenever either side has not received favorable coverage, their reaction has been swift. When KUOW annotated the op-ed, it reportedly infuriated Murray’s team, which threatened at one point to refuse future interview requests with the station. Reading said they would consider KUOW again for interviews, but called the annotation “unprecedented, unfair and unacceptable.” Unlike a public speech, he said, KUOW had altered something the station solicited (although it had already run without annotations in the Stranger). It “serves only to undermine and discount the Mayor’s perspective,” he said.

On the other side, Lincoln Beauregard, the main attorney for Murray’s accusers, has gone so far as to take to the comments section of the Stranger to comment directly on stories about him and his client. He also apparently called reporter Heidi Groover’s reporting “impulsive garbage.”

The Trump comparison to the mayor's handling of the media is tired, but the president's attitude toward the press is certainly reflected here: In a high-stakes story like this one, detest of and reliance on media are inextricable. Because if, as several outlets have opined, this is a case in the court of public opinion, as much as either side may moan about their message getting spun in the wrong direction, neither is likely to cede any webspace to the other so long as the case continues.