Tacoma mulls the fate of an immigrant prison 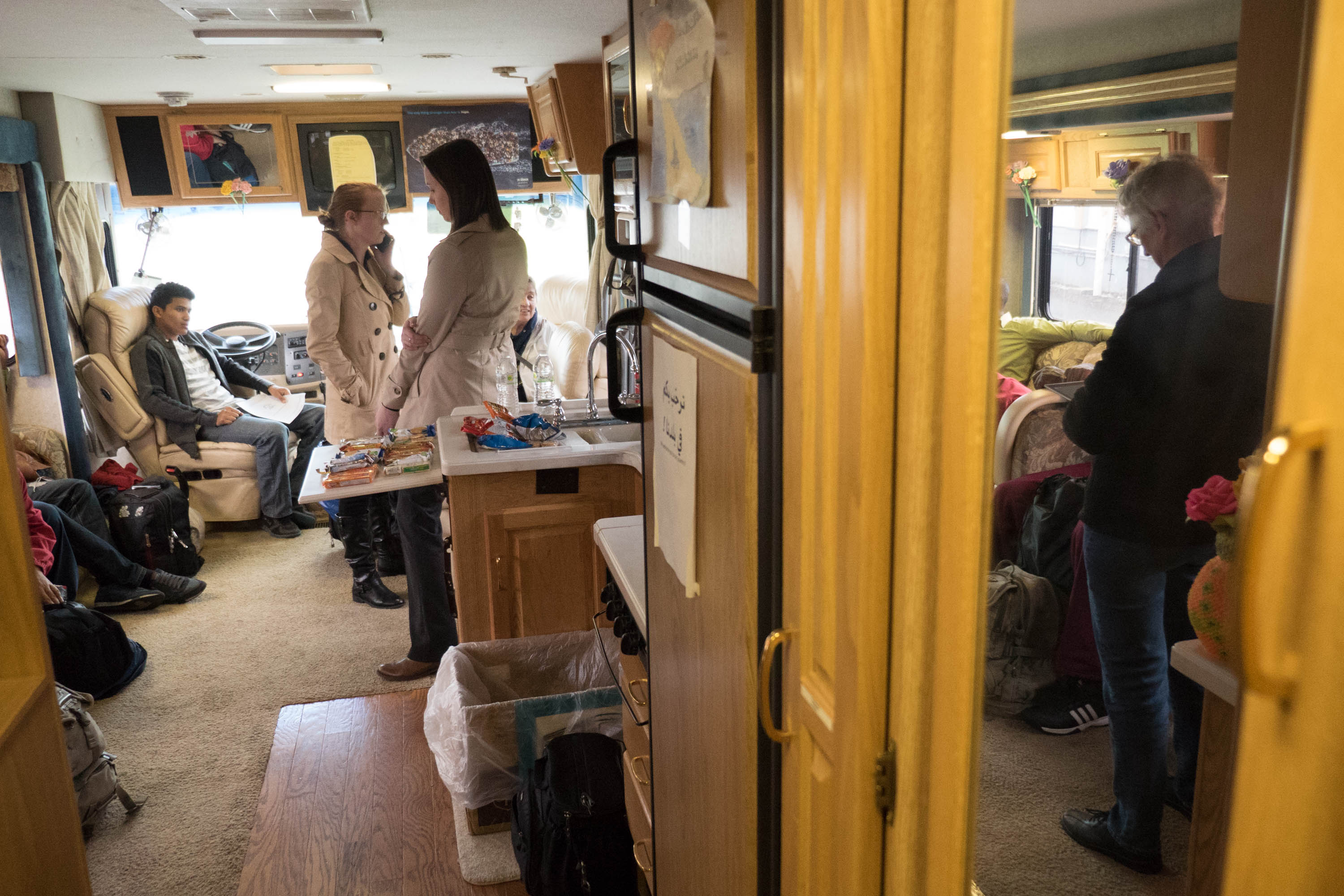 Outside the gates of the Northwest Detention Center, a recently released detainee sits inside the AID NW bus while a legal aid makes phone calls and volunteer Fran Olufs (right) helps finding him a place to stay for the night. The nonprofit helps former detainees plan next steps after they've been released.

For those who want to make Tacoma a welcoming city to immigrants and refugees, the Northwest Detention Center is a tumor. For those who manage it, the boxy, privately run facility on the city’s tide flats is as humane as a private prison can be.

The center has been the object of controversy since it opened in 2004. In 2007, a man held there went on a hunger strike for fear of being sent back home to Yemen. In 2014, there was another hunger strike by detainees who complained about bad food, lack of medical care and lengthy court hearings.

In recent weeks, the facility has once again been thrust into the public eye as hundreds of inmates launched a hunger strike to protest poor living conditions. And now, the Tacoma City Council is considering a change to the city’s zoning laws to permanently prevent the 1,575-bed center from expanding.

The council passed an interim block on expansion in early March. On Tuesday, it hosted the first public hearing to gather public comments on a permanent ban on the growth of any private prison within city limits.

Rose Richeson, a spokesperson for U.S. Immigration and Customs Enforcement (ICE), said that the agency "has no plans to expand the physical footprint of the Northwest Detention Center at this time." She added, however, that "Any near-term expansions ICE may consider pursuing would be to enhance the conditions of confinement, specifically to accommodate additional courtrooms and immigration judges, medical facility support, recreational opportunities and administrative offices.”

James Black, with GEO Group, the corporation that runs the prison, said the company is "looking at enhancing Northwest Detention Center” by adding more recreation and health facilities. Stopping that through zoning would obstruct the improvement of what he called a “safe, secure and humane” facility.

“Imposing regulations on GEO will not change who ICE detains,” added Black, who is vice president of the company's western region.

But those arguments fell largely on deaf ears among those gathered downtown, who greeted Black's statements with hisses and boos.

“Every immigrant has a story for why they put their lives on the line for a chance to survive,” Merelin Delong, A Tacoma resident who came from Guatemala when she was 4, said Tuesday night. “As you make a decision for whether to expand or not, think about who’s behind those bars.”

Jorge Barón, head of the Northwest Immigrant Rights Project (NWIRP), says the number of people being picked up by ICE has roughly doubled in the last six months, as President Trump pushes stricter immigration laws. At that pace, advocates figure, an expansion of the center is inevitable.

The facility is the landing spot for a large swath of people, many of whom have no history of crime:

When immigration agents arrested Daniel Ramirez Medina, the young, undocumented recipient of a work permit from the Obama administration, they took him south from his father’s home in Des Moines to the center, where he spent six weeks in jail.

When two men, one from Yemen, the other Sudan, were detained last February at Seattle-Tacoma International Airport because President Trump signed a ban on travel from their home countries while they were in mid-flight, they too were moments away from spending the night in the center. They avoided that fate only after fierce lobbying from Barón with NWIRP.

And when asylum seekers claim they cannot return to their country of origin for fear of persecution, more often than not, the Tacoma detention facility becomes their temporary home as their cases are considered. It can be months, even years, in a cell.

That the prison is run by a private corporation is particularly galling to immigrant rights advocates. The federal government pays these private prison companies the same amount regardless of how many people they are holding. Some see this as an incentive for ICE to keep beds full: They're paying for the rooms either way.

Regardless, it’s a money maker: When GEO Group signed its most recent contract with the federal government, the company estimated it would generate $57 million a year from the Northwest Detention Center.

The current proposal would restrict ban public prisons from expanding into residential areas. It would halt all expansion of private facilities.

GEO Group attorney Joan Mell made it clear that the company would consider a legal challenge.

Many of the commenters at the hearing called for a blanket ban on private prisons in Tacoma. “We’re strongly opposed to the existence of private prisons anywhere, and we strongly support any effort to ban them,” said Karla Rixon, 32, a member of Indivisible Tacoma, an activism organization born out of opposition to the Trump administration.

In principle, Tacoma Mayor Marilyn Strickland seemed to agree. “If this city council,” she said, motioning to the eight councilmembers to her left and right, “was asked if they want to build a detention center on our tide flats, we probably would have said no.”

But, she said, the city was unlikely to shut the facility down. Not only are there questions about whether the city could do that, but Strickland said that such a move wouldn't solve the more fundamental issue. “Let’s say we get to the place where we hypothetically shut this place down,” she said. “That doesn’t change federal policy.”

And as long as that federal policy continues, Strickland continued, it is the city’s duty “to make sure people who work [at the detention center] and who are detained there are treated respectfully and humanely.”

The final vote is scheduled for September 6.