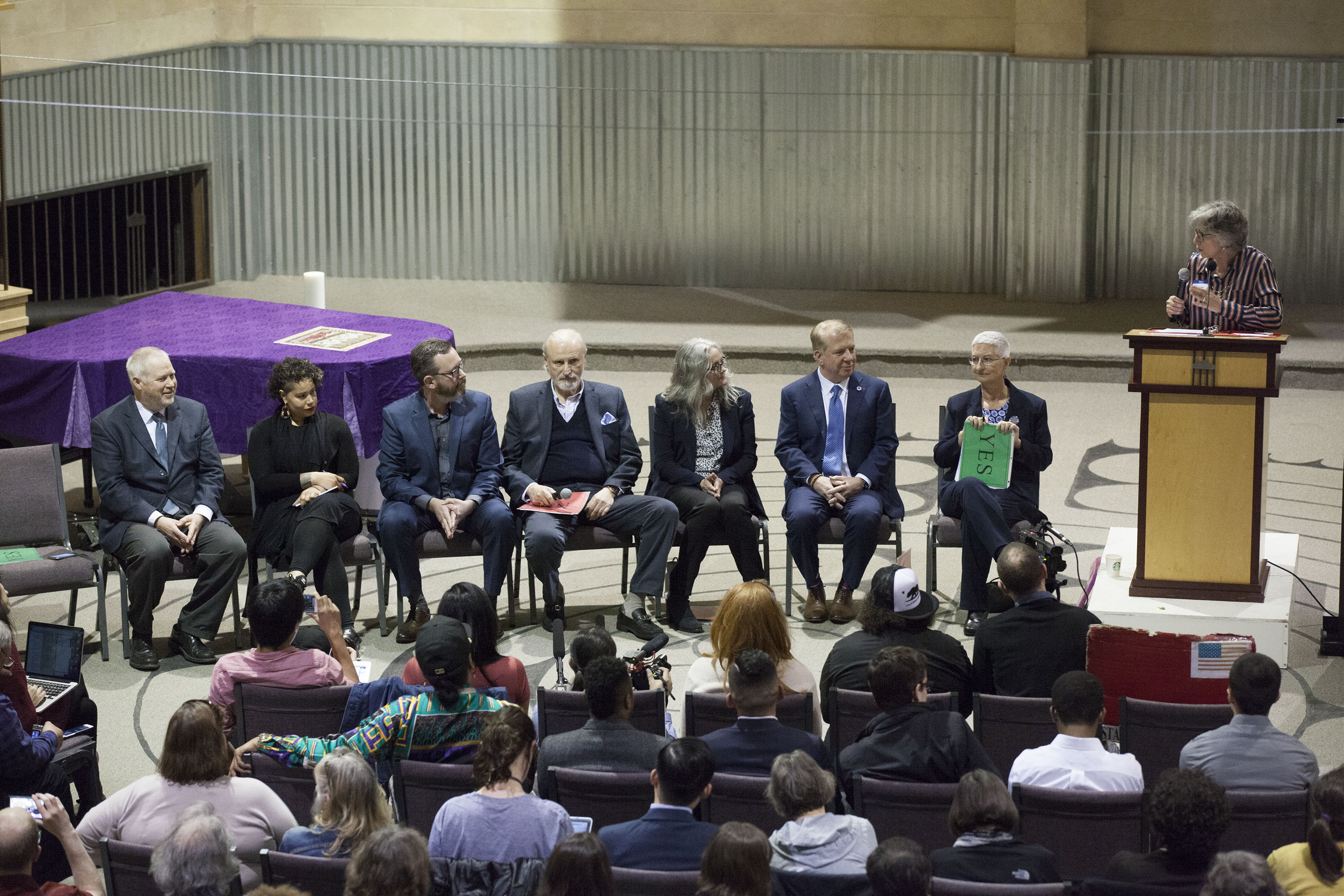 If energy equals votes, Nikkita Oliver will be the next Seattle mayor. In what could have been a sleepy first forum with a panel of seven mayoral candidates, Oliver’s fans whooped and cheered Thursday evening despite admonitions to hold their tongues.

But while Oliver seemed to bring the most (or most vocal) support, it is current Mayor Ed Murray who will dominate news recaps of the event. Not only did he say he supported allowing duplexes and triplexes in single-family neighborhoods (a policy he’s backed down from once before) and not only did he say he did not support the homeless sweep policies of the city (which have grown under his watch), Murray also reversed course on his stance on a city income tax.

Undercutting one of the major points of difference between him and his challengers , Murray announced he would release a city income tax proposal on high-end earners in the coming weeks. Although the crowd applauded, the proposal is likely illegal under state law. As others have done, Murray acknowledged that it's a long shot, urging people hold their applause. “It’s too soon to cheer,” he said. “It’s going to be challenged in court, but if we win in court and we can get that high-end income tax, we can shift our regressive taxes on sales tax and on property tax onto that high-end income tax.”

Murray, it seems, has decided it’s worth making waves in his campaign for reelection.

Former mayor Mike McGinn said he supported exactly this approach when he announced his candidacy earlier this week. And when it was his turn to speak Thursday, he reminded the crowd of this. "I proposed an income tax," he said, adding, "if that is found not to be legal, we need to tax the big corporations that are benefiting from growth."

In a lightning, yes or no round, all the candidates said they supported an income tax except urbanist advocate Cary Moon. In an emailed statement Friday, she explained why:

"Putting our hopes on only an income tax proposal that may take years to run through the legal system diverts attention away from real solutions City Hall can and should implement now," she said. "And I’m concerned that it doesn’t address a glaring tax loophole in our state: unearned wealth from gains on selling stocks would be ignored in this proposal."

Once upon a time, this mayoral race looked like it would be boring. Murray had strong approval ratings. He’d run the table on endorsements and he was flush with cash.

But allegations that he sexually abused children in the 1980s, which he's repeatedly denied, have tossed boring to the wind. He now faces serious challenges from Oliver, former Mayor McGinn and Moon. It is perhaps this added pressure or just the nature of campaigning that Murray suddenly seems to paint himself as more aggressively progressive than his opponents believe him to be.

The allegations against Murray were nowhere to be found Thursday evening in the Seattle Mennonite Church off Lake City Way, a carpeted cathedral lit with upward facing lamps. The forum was part of a meeting of the 46th district Democrats. It was the first time the mayoral candidates, as well as those running for Seattle City Council Positions 8 and 9, were given an opportunity to publically pitch their platforms. More than two hundred people filled the room to capacity.

The event was not a debate, but more stump speech after stump speech. Candidates and their cadres of staff and volunteers littered the room with pamphlets and headshots.

Seven out of ten declared mayoral candidates showed up: Murray, Oliver, McGinn and Moon, who are considered to be the most serious contenders for the office; and socialist Mary Martin, consultant Jason Roberts and serial City Hall commenter Alex Tsimerman. (Casey Carlisle, David Ishii and Keith Whiteman did not appear. Earlier Thursday, transit-wonk Andres Salomon announced he was dropping out of the race to avoid siphoning off votes from either McGinn or Moon.)

Although Seattle candidates are generally viewed as being varying shades of left, the differences in their messaging were notable.

Murray introduced an income tax proposal. Outside of that, however, he stuck to his talking points: he championed the “grand bargain” that mandates developers pay for or build affordable housing. He lamented the state of the system he inherited to address homelessness and touted his proposed fixes. And he sold his endorsements from regional partners.

Oliver championed the crowd-sourced, people-powered muscle fueling her campaign and how her election will continue the work of community advocates. “Every great change that has occurred was because communities have risen up," she said, citing the city's housing agenda, $15 minimum wage and police reform as proof. It's been noted she would be only Seattle's second woman mayor. She would also be only the second person of color to hold the office.

McGinn is aiming to convince Seattle voters that he’s worth a second term; he lost to Murray in 2013. Although he’s a former Sierra Club advocate, he’s striking a more fiscally conservative tone. At the forum, he reiterated a message that Seattle’s taxes are regressive, so cutting and reprioritizing the budget is better policy.

Moon hammered home a position that others have not adopted: investors and financiers are making housing expensive, so let’s tax them. "The solutions are not that hard to figure out,” she said. “The hard part is building the political will and courage to do the right thing."

Following the mayor's race, the candidates in the crowded race for Councilmember Tim Burgess' open seat made similar pitches.

When it was over, the candidates worked the audience, handing out more campaign materials, bringing a close to what clearly felt like the official start of the 2017 Seattle mayoral race.