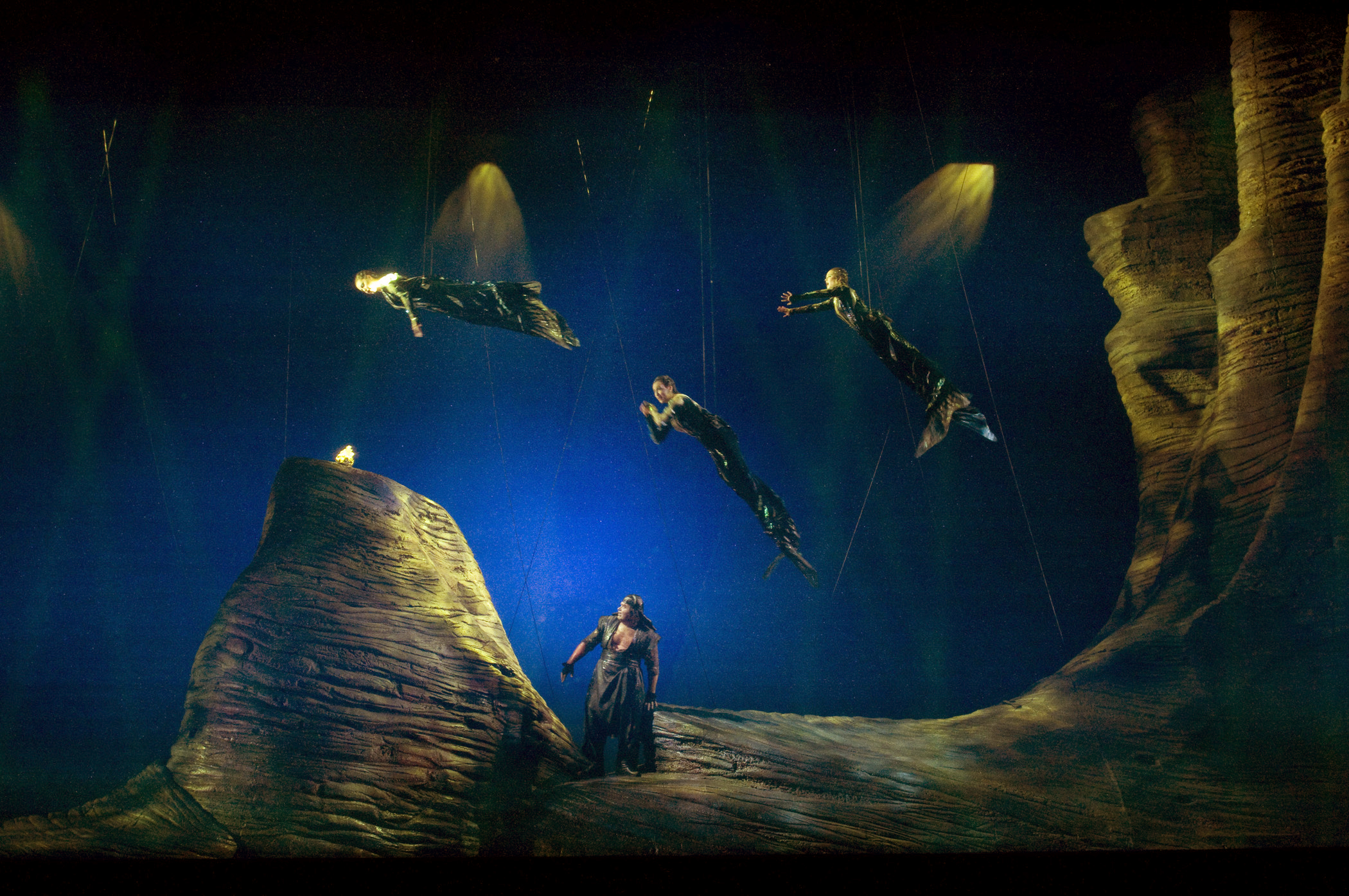 Rhinemaidens swim under the water in Das Reingold (from Wagner’s Ring cycle), 2009.

This story was originally published on KCTS9.org.

The castles are labyrinthine. The dragons breathe fire. The forests are mammoth and equally as magical.

For three decades, the Seattle Opera’s scene shop in Renton has delivered a whole array of fantastical creations. It’s one of the few shops of its kind in the country able to create such grand and complicated sets and props.

But last month, the Opera announced it was shutting down the shop, laying off two scene shop staffers (as well as another four in the organization). In email announcements, General Director Aidan Lang called the cuts “difficult” and “painful,” but explained that the organization’s financial situation has been tenuous. The shop earns revenue from work for outside theater clients but that profit is “small” and doesn’t cover “the true cost of overhead (utilities, insurance, payroll, etc.) to run this facility,” Lang said.

Eliminating the scene shop and using the building for set storage will help save the organization nearly $500,000 a year, according to Kristina Murti, Seattle Opera’s communications director.

The opera’s operating budget for fiscal year 2017 is $22.5 million. But its annual operating expenses have been $2 to $3 million higher than annual revenue for more than a decade, Murti said. Revenue gaps had been bridged by a series of one-time donations that “are no longer available to us,” she said.

But the scene shop, say current and former employees, is not only a tremendous cultural asset. It also has financial value for the organization as well.

Michael Moore, a 30-year Seattle Opera veteran and scene shop manager, says the scene shop has been self-supported from income earned by building sets and projects for other organizations. According to Moore, the shop last year produced $1.3 million worth of projects, of which 61 percent were non-opera bids that returned $118,000 to help cover shop overhead/management costs related to non-opera projects. The annual overhead for the shop, not counting salaries, is $78,000, Moore said.

The Renton shop has constructed sets for local organizations including Seattle Rep, Seattle Symphony, EMP/MoPop, Pacific Lutheran University as well as for Portland Opera and Washington National Opera in Washington, D.C. The shop has built or worked on 30 sets for Seattle’s 5th Avenue alone. Just last week, the Renton shop was finishing giant garden sets for the 5th Avenue’s production of The Secret Garden, which opens April 14.

The 5th Avenue, a Broadway feeder, would not comment on the shop’s closure and what it could mean for the theater’s productions in the long run. The theater, a source said, is “not in panic mode but they’re scrambling.”

The Renton shop closure will leave San Diego Opera’s shop as the only other facility of its kind on the West Coast.

Meanwhile, the Opera is in expansion mode, raising $60 million for its new production, rehearsal and office complex (Seattle Opera at the Center), scheduled to open at Seattle Center in 2 years. There is no set construction shop planned for the building, signaling what could be a new direction of co-production and more reliance on technology — projections, video, high-resolution printing —which can be cheaper.

Opera, as a whole, said Lang, is moving toward a “cleaner aesthetic.” That can be powerful in connecting audiences to the singing, the acting and the music. Everything about opera is larger than life but sometimes audiences can miss the performance if they’re mesmerized by over-the-top sets.

“The thing about spectacle: it tends to encourage a passive sitting back and enjoying it,” Lang said. “The more you are an audience member on the edge of your seat, leaning forward — you’re going to be engaged to a richer level.”

How this new aesthetic might affect the mammoth sets of its proposed new Ring cycle, which has made Seattle Opera internationally famous and draws an international audience, is unknown.  Set models, said Lang, are being studied but the first of four operas in the Wagner cycle has yet to be scheduled.