Seattle should just say no to May Day riots 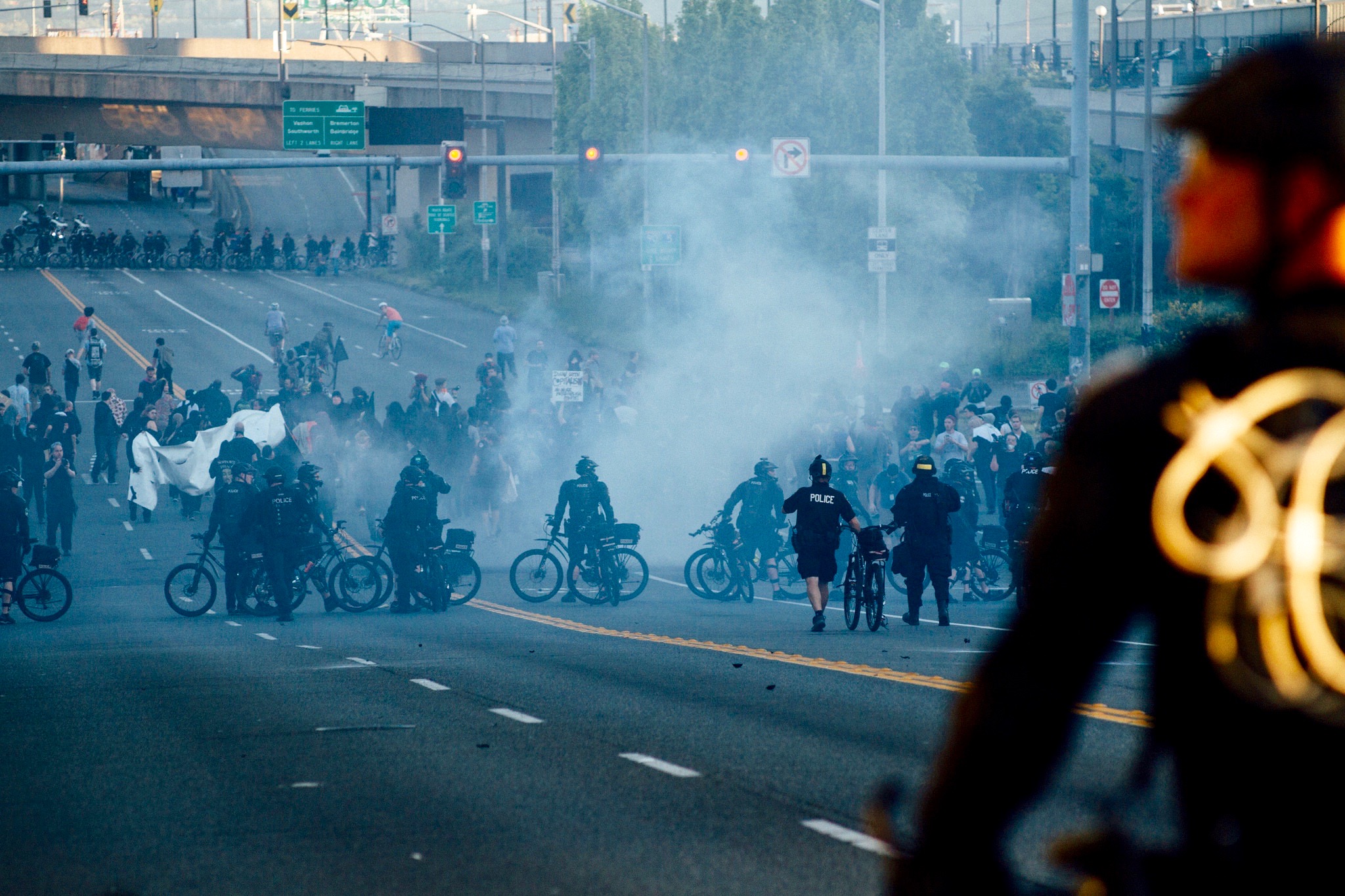 Police and May Day 2016 protesters near the SoDo district

Every first day of May since 2012, the large, loud and peaceful May Day march featuring thousands has been easily overshadowed by several dozen people known variously as anarchists, anti-fascists or anti-capitalists. How does a group that, at its core, is probably fewer than 100 people steal the show from many thousands?  By rioting.

Last year five police officers were injured, the year before three were hurt, and there were more in the three years before that.

It doesn’t matter who the president is, what party controls Congress or Olympia, or what the Seattle City Council is doing this week. The crowd’s members do not show up with picket signs, they show up with weighted sticks and clubs. In their backpacks are rocks, wrenches, soda cans filled with cement, M-80s and other fireworks they weaponize and aim at police, and Molotov cocktails.

The goal of the rioters seems to be simple. Do as much damage to businesses, public buildings and people’s property as possible, mostly by smashing windows in storefronts and cars and setting fires, and then injure the human beings wearing badges who are duty sworn to restore order and keep the peace. The more destruction done to property, the more cops bloodied and injured, the more successful the event.

Why are we allowing this to continue?

Free speech? Hardly. There is no First Amendment right to riot. And we’re not talking about a rowdy but lawful demonstration that “gets out of hand.” They arrive here to violently break the law and everyone — the rioters, the cops, City Hall, the media and the public — knows it.

It’s understandable how mayhem like this could happen the first year or even the second year. But five years in a row? Yet here we are. The May Day riot is practically a scheduled event, with students and millennials showing up on the riot’s periphery to see who’s getting the worst of it.

This is a stomach-turning tradition Seattle doesn’t need.

It is illegal to march on the streets of Seattle without a permit. The rioters never have a permit, and they’re allowed to march anyway.

On what grounds do we allow this? Tolerance? Allowing the freedom to riot and assault police officers isn’t tolerance. It’s frank stupidity.

So here’s an idea. This year tell them, no. No permit, no march.

This is Mayor Ed Murray’s chance to show real leadership by announcing that laws against illegal demonstrations will be strictly — and instantly — enforced. He should reinforce this announcement by issuing an emergency temporary order allowing police to confiscate any stick or club that could be used to injure people or damage property (then-Mayor Mike McGinn did something similar in 2013, but only after the riot was under way).

Give Police Chief Kathy O’Toole the green light to flood the riot zone with enough cops to overwhelm the small number of thugs. If they want to rally at Seattle Central plaza or Westlake Center, fine. But they will not march and they will not riot.

Then the media should up its game. The question most asked by viewers watching the annual chaos in the streets is “Who ARE these people?” Press coverage can answer that question. Begin by publishing the booking photos of any unmasked protesters who wind up being arrested. Better yet, have the police perp walk them. They come to this town craving anonymity — that’s one reason why they cower behind those masks and scarves — so let’s get to know them, beyond their ages, hometowns, schools and student status. Some of them are employed. Where?  Some aren’t employed or in school. Where do they get their money? What are their other affiliations? The bright sunshine of extensive news coverage is a wonderful disinfectant for riotous activity.

It took the death of a young man, Kris Kime, with 70 more injured during the Mardi Gras riot in 2001 to seize the city’s attention and crack down on an earlier Seattle tradition gone mad. With May Day, we are one explosive Molotov cocktail away from someone getting killed, one hurled wrench away from a fractured skull. Enough.

It is outrageous that a small coterie of thugs hijack public attention and media coverage from the much larger, legal and peaceful May Day demonstration held earlier in the day. I may not sympathize with many or even most of peaceful demonstrators' causes, but the coalition of liberal, labor and left wing marchers are following a great American tradition of being seen and heard in large numbers to advance their agenda lawfully and peacefully.

And all of us, regardless of race, income or politics, should be dismayed that our men and women in uniform, most of whom have kids and spouses waiting for them at home, are being used as targets every May 1 for inexplicable, and inexcusable, violence.

The rioters boast that their violence “sends a message” to Seattle. This year Seattle should reciprocate with a message of its own: No permit, no march.