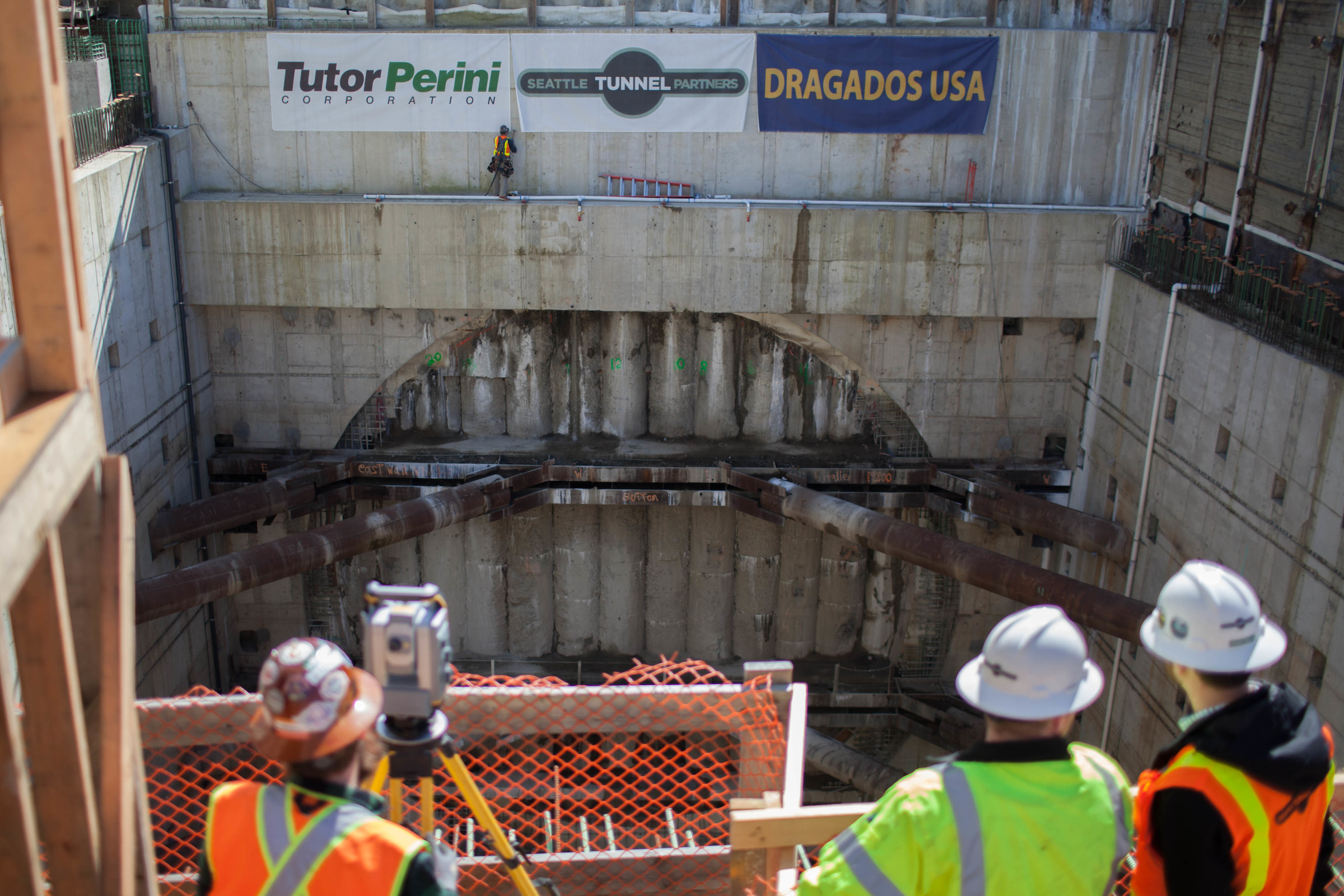 Seattle Tunnel Partners employees are seen working at what will be the exit of tunnel boring machine Bertha near 6th Avenue and Thomas Street on Monday in Seattle.

It was Seattle in 2010 — when first-term President Barack Obama was still glowing from the passage of the Affordable Care Act, Edward Snowden was an unknown contractor for the National Security Agency and Russell Wilson was still playing in college at North Carolina State — and three contractors were competing to build the largest tunnel in the world.

Six stories in diameter, and more than 9,000 feet long from SoDo to South Lake Union, the tunnel would pass through sand, gravel, silt and clay and not a small amount of trash buried underneath Seattle. It would travel beneath the Alaskan Way Viaduct, one of the world's most precarious highways and traverse downtown.

Excavation of the tunnel would leave a trail of dirt roughly the height of the Columbia tower, to be carried across Puget Sound and dumped at Port Ludlow's Mats Mats quarry.

And it would cost $1.4 billion, one piece of a $3 billion effort to replace Highway 99.

One of the finalists for the project was Seattle Tunnel Partners, an umbrella company made up of two larger construction firms. STP was the Spirit Airlines of tunneling, known internationally for bidding low and then making up the lost profits elsewhere, frequently in court. This was no secret.

"One of the questions that came up was they had a reputation of suing people frequently," says former-Seattle City Councilmember Tom Rasmussen, a key proponent of the tunnel. "When we asked them, 'What about this?' the response that I recall was that this was a whole different leadership."

Not to take them at face value, but Rasmussen says he felt reassured by city and state attorneys that the contract would place the burden of risk on the companies, not the taxpayers — called a design-build contract.

Seattle Tunnel Partners won the job. The entire project, highways and all, was expected to be completed in December 2015 if not sooner, officials announced at the time.

But when the tunnel boring machine Bertha, named for Seattle's respectfully remembered and only female mayor, Bertha Knight Landes, busts through a 5-foot thick wall on Tuesday as it's expected to do, it will set off a party to which Bertha is more than three years late, with a new opening date of 2019. And the tunnel project's final cost will run, at the very least, $200 million more than expected.

At times, the tunneling left legitimate fear in its wake that it could cause the viaduct to crumble or Pioneer Square to sink. That "whole different leadership" of the Seattle Tunnel Partners has filed nearly half a billion dollars in claims and will put to test the design-build contract. The legal fight will unfold over many years: More than 350 subcontractors have touched Seattle's Big Dig, providing anything from photography to transportation to geotechnical engineering. That's a lot of potential liability, claims and counter-claims to work through.

Nevertheless, with the crash of concrete Tuesday, the Washington Department of Transportation and STP — client and contractor — will share a moment of good feeling and accomplishment.

"Today we're here to celebrate the success of the tunnel," WSDOT's tunnel project manager Joe Hedges said Monday. "The litigation's going to be ongoing. We've both got great teams of lawyers who will get us through this process."

Although Christine Gregoire was no longer Washington's governor when Bertha began digging, she was there for its christening, helping to smash a bottle of champagne on its hulking ribs. She'd fought for the tunnel, and her successor, Gov. Jay Inslee, invited her to come.

Most everyone today agrees with Gregoire's decision that the viaduct is an earth-shudder away from collapsing and cannot continue to exist indefinitely. The options to replace it were either to build a new viaduct, create some combination of surface streets and transit to make up for its loss, or build the tunnel.

The fight over the best way to move forward was brutal, defining in some ways political parties in non-partisan Seattle. In 2009, when Gregoire announced her support for a tunnel to be bored underneath downtown, the plan was one of two things, depending on where you stand: The best possible option to save the waterfront, even despite it troubles; or a risky investment into the wrong priorities. The Seattle Times was in favor; The Stranger, staunchly opposed. Mike McGinn, on his way to election as mayor later that year, was opposed; his 2013 opponent for mayor, then state Sen. Ed Murray, for.

In 2011, Seattle voted in favor of the tunnel, although there was no shortage of controversy and confusion surrounding that vote.

Still, to this day, some of the wounds are raw. "When you look at the options, the one that was most sound environmentally is the one we chose," says Gregoire forcefully, looking back. "You don’t just take down the viaduct and do nothing."

At the same time, though, those who warned of inevitable hiccups in the tunnel's construction, often dismissed at the time, came to look like soothsayers.

Built in Japan by Hitachi Zosen, the machine was designed to maintain constant pressure at its face. With these types of machines, digging in consistent soil is a cinch. But as it descended below Seattle's notoriously varying and difficult layers of fill, the muck seeped into places it should not have been, grinding down seals and causing the machine to overheat.

A rogue pipe was involved, but whether that was the cause and whether its placement was the state's fault will be a question for the courts.

As Bertha was being fixed (through a 120-foot deep pit and a specially built crane), the viaduct began to sink and tensions in City Hall continued to rise. City council members felt they were not getting the information they needed; trust that the project was being operated well continued to erode at the local and state level . “I don’t know how worried I should be," said Councilmember Mike O'Brien at the time. "But do I know that someone’s looking out for this? My confidence has been shaken.”

And when Bertha did begin to move again, a sinkhole opened up and speculation about the project's future continued in earnest.

But a year after the sinkhole debacle, Bertha will finally emerge from the northern portal of what will be Highway 99 in the future.

Gregoire stands by her convictions that the tunnel was the right choice. While she admits she didn't expect such "big hurdles as we went through," she spoke in amazement about visiting the tunnel, marveling at its size and engineering accomplishment. And she spoke of the need for government to take risks. "I think we’re going to look back, as I’ve seen the people of Boston look back … and we’re not going to remember the hurdles or the downtime," she says, referring to a Boston tunnel project that ran eight years behind schedule. "We’re going to ask ourselves, 'Why didn’t we do this a long time ago?'

"When that [waterfront under today's viaduct] is opened up, I have every expectation that people will love it."

McGinn, who warned early and often that building the largest tunnel in the world could come with significant risks and delay, also stands by his convictions. "What a missed opportunity to invest in something that really would have helped us with traffic," he said, referring to adding light rail earlier, coupled with surface streets. "Even if it had worked out perfectly, it’s not really the priority. Building a tunnel with no downtown exits is not going to help our traffic problems."

"In five-10 years, people are still going to be stuck in traffic while we wait for Sound Transit. They may forget the woes of the tunnel, but they won’t forget waiting in traffic," he says.

As the machine crawls from its hole in South Lake Union, the contractors will begin to cut it into sections weighing less than 20 tons a piece. Cranes will then carry sections of Bertha to trucks headed to ships that are then headed to Japan.

Because the most precarious piece of construction, the tunneling, is finished, it feels like the project is also finished. In reality, the tunnel won't open until 2019. As Hedges said, "This is not the fourth quarter. This is halftime."

A new highway must now be built inside the tube. The viaduct still needs to be torn down. Building surface streets along Seattle's waterfront will be a massive undertaking in their own right.

And then there will be the lawsuits, determining in the end how much the entire tunnel project will actually cost.

How much it will cost motorists to drive through the tunnel will depend in part on the outcome of the legal fights over the costs of the construction. Rasmussen believes the contract is well-written and should protect taxpayers.  "We asked our attorneys that and they assured that this is strong enough," he says.

McGinn's not so sure. "I know that Tom Rasmussen and others think we have a good contract," he says. "But they also said there wouldn’t be any cost overruns."