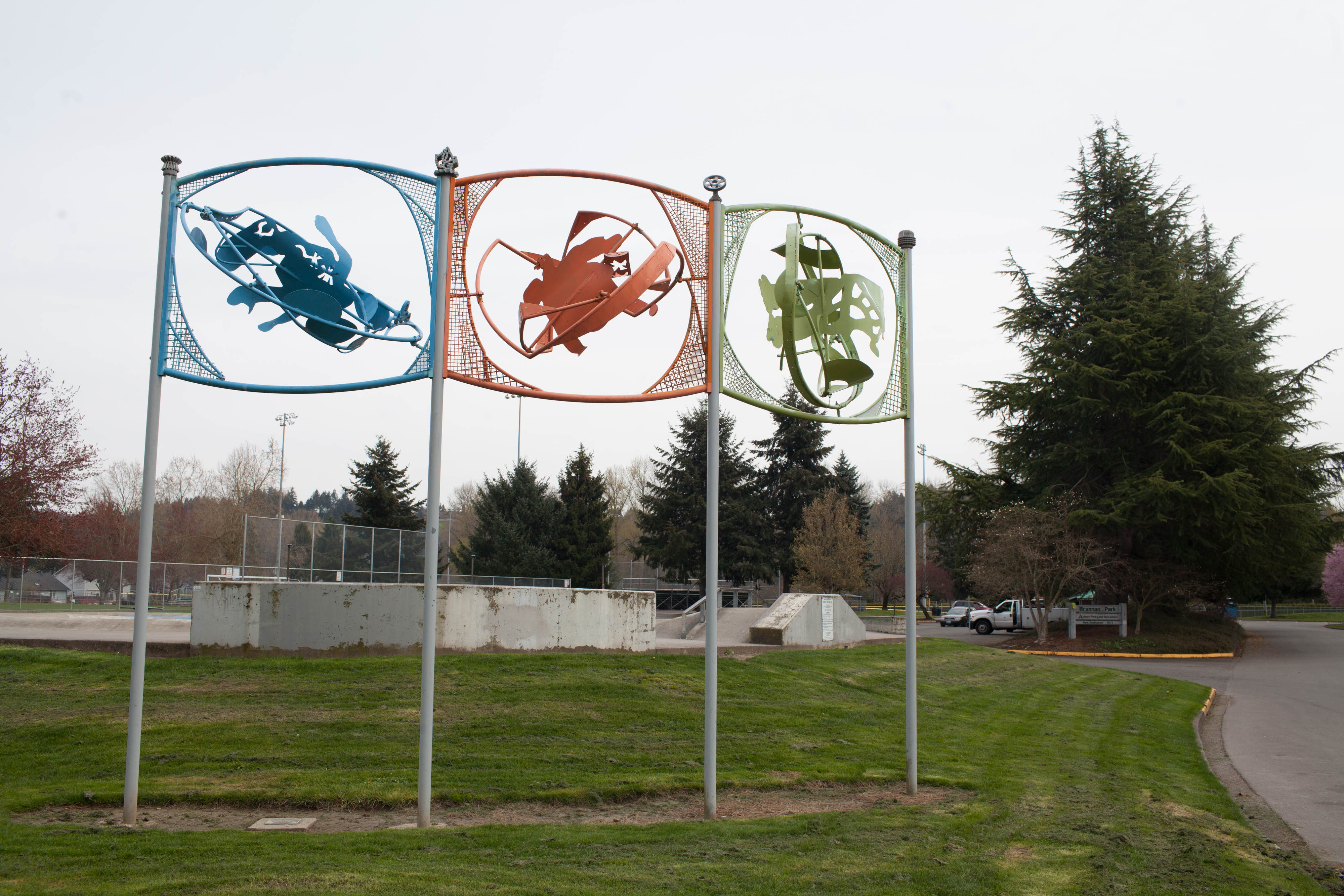 Can landscapes become imbued with historic trauma? And if so, can they pass it along? Is there an example here in Puget Sound country?

Those questions intrigue Coll Thrush, professor of indigenous studies at the University of British Columbia. Thrush is the author of “Native Seattle,” the groundbreaking history of the Native American role and presence in our urban history. A new paperback edition is just out from the University of Washington Press. He is also the author of the recent “Indigenous London,” looking at the influence of native peoples on the heart of the British Empire from the 16th century on.

But Thrush’s next project is one that seeks to directly address the questions about trauma. Tentatively called “SlaughterTown,” it is a history and memoir of the place where Thrush grew up, Auburn, and the landscape of the valleys between Seattle and Mount Rainier.

Most of us know this area as farmland or the location of vast malls and manufacturing plants. Once bucolic, now sprawl, it also sits in the path of whatever devastation Mount Rainier might one day release. That, however, is trauma yet to come, as the evacuation routes and warnings attest.

I had a chance to talk with Thrush about “SlaughterTown” while interviewing him recently at Folio: The Seattle Athenaeum. We also had a chance to talk afterward in more detail about his thinking on trauma, which is cutting-edge — perhaps too much edge for some people. But I think exploring past traumas and our response to them might be key to understanding ourselves and this place we’ve made our own.

Thrush is intrigued by the emerging scientific field of epigenetics. It looks like in some cases, life experiences can affect chemicals in the body that can activate genes passed on to children and grandchildren. In this way, a learned pattern of behavior or response might be hereditary without actually changing the genome. This could explain why certain tendencies, such as the multi-generational effect of trauma, can persist in populations.

Thrush wonders if there’s what he calls an “epigenetics of place.” Are some places where traumatic events have occurred the source of continuing traumatic influence? Are they haunted? Or are traumas alive and well and passed on in the experiences and behavior of those who live there? Do some places, in effect, nurture trauma?

On the face of it, Auburn and its surrounding valley don’t leap to mind as a trauma landscape, save for the cataclysmic events that took place there some 5,600 years ago when it was an arm of Puget Sound that was filled in by a massive Mount Rainier lahar. In a soon-to-be-published paper exploring the area, Thrush notes that local native oral traditions refer to the presence of whales in the valley, perhaps a remnant of those pre-lahar times. We know native memories are long and have recorded millennia-old cataclysms from great floods and tsunamis to earthquakes and eruptions.

But within the time of European settlement, the greater Auburn area has seen a list of significant traumas that Thrush can list off. Take the original name of Auburn, which was Slaughter, named after a West Point-trained army lieutenant, Lt. William Slaughter, who was killed there along with some of his men by Indians in 1855. His unit was in the area because of a massacre of settlers — the White River Massacre — that was part of the 1855-6 treaty war with local tribes. For a time, the town featured a hotel called the Slaughter House — someone had a sense of humor. Like many frontier areas, Auburn was settled in blood and displacement.

Another man-made trauma, says Thrush, was the elimination of one of the rivers that ran through town. Farmers, tired of devastating seasonal floods, dynamited a hillside that filled a five-mile section of the White River and diverted the rest into the Stuck River in the early 1900s. No one thought about the salmon runs destroyed, the habitat wiped out. An environmental trauma had taken place and afterward, Thrush says, locals seemed reluctant to talk about it.

Later, the valley was home to many Japanese-American farmers who were rounded up and put in camps during World War II. The infamous internee assembly site with the Orwellian name of “Camp Harmony” was on the site of the nearby Puyallup fairgrounds. Gordon Hirabayashi, famed for his resistance to the internment, was a grad of Auburn High.

Not only did the area see the forced removal of many of its farmers and residents, but after the war, many white farmers resisted their neighbors’ return and formed groups like the Remember Pearl Harbor League saying they would never accept “the Japs” again. Even in the 1970s and ’80s, when the Japanese American community sought redress and hoped to install a memorial on the fairgrounds, the local American Legion opposed commemorating the internment there and asked instead for a Pearl Harbor memorial. A commemoration of the internment did go up eventually. But denial of repatriation, the substitution of one trauma for another and refusing to acknowledge a tragic mistake all seem to be part of the landscape of trauma.

If that isn’t enough trauma, Gary Ridgway, the so-called Green River Killer, lived for a time in Auburn, and the areas south of Seattle — Sea-Tac, Tukwila, Kent, Auburn — were prime stalking grounds and killing fields for scores of his victims in the 1980s and '90s. Thrush says he is reading through Ridgway’s post-arrest statements detailing many of his grisly murders. I’ve read them too and they’re rough going, as the savagery is mind-boggling. Ridgway too is a creature of the region, a man who put real slaughter into SlaughterTown.

I asked Thrush if he had to choose one place in Auburn that reflected the embedded traumas of place he’s thinking about. He told me it’s Brannan Park, a popular city sports complex along the Green River named for Joseph Brannan. It is also located very near the site of the White River Massacre and the homestead where Brannan’s brother, sister-in-law and children were killed. After the 1850s massacre and treaty war, Brannan took it upon himself to seek revenge. For years he murdered Indian men he thought responsible for his brother’s family’s death. He became a serial killer and only stopped when his fiancé begged him to end his reprisals. Brannan is one of the founders of Auburn.

As Thrush contemplates this history, he is also reflecting on his own family and its pioneer origins. What mark upon them is the violence of the Westward expansion? He wonders how to write about other people’s pain, as well as his own. These historic events were not a conscious part of his upbringing, but part of what he describes as “growing up amid silences.”

A scholar of trauma, history and literature, Cathy Caruth, notes that part of what defines a trauma is an event that cannot be easily understood or assimilated. It can return to haunt unexpectedly on its own time schedule as memory of it refuses historical boundaries. Trauma’s influences on place might trigger memory, but also might trigger a conscious desire to forget. In the case of Auburn, Thrush wonders if the decision to pave over such fertile farmland was acting out a desire to bury much of a painful past. The fertile valley becomes concrete-coated strip malls. Are we literally trying to cover up the past?

Thrush is sure that history is not entirely in the past. The Muckleshoot tribe, for example, has many stories of the treaty war period and their sufferings. He says they are compiling them into a document for their community. The Muckleshoots are still an active presence in the area — therefore their stories are part of a living present.

We are still dealing with ecological devastation of the kind that dynamited the White River, trying to restore salmon runs and wetlands. Eliminating the river is emblematic of other eco-traumas we are trying to heal from or rectify, whether cleaning up Puget Sound or undamming the Elwah River. Destroying the salmon runs has had a cascading effect on things like our endangered orca population.

The Japanese internment is being commemorated this year as the shrinking number of survivors are still around, 75 years later, to remind us of this mass trauma and why it should never be repeated.

And surely the shadow of Gary Ridgway still haunts our streets, cul de sacs and greenbelts which are still not safe, and where the sex trade continues.

“SlaughterTown” is a subject Thrush has been mulling for some 25 years. It is personal and academic. It is historic and contemporary. It has no final shape, though Thrush hopes to write it with lyricism not often found in scholarly books.

He’d love to write something evocative. With a recent field like epigenetics to inspire, it is sure to be original. He has no deadline.

For Thrush, though, his subjects are patient, even timeless. They are locked into a landscape that nurtured him. Digging out stories of place that are hard to hear will certainly have resonance and value for us if we spare ourselves the hard work of consciously forgetting uncomfortable truths.

You can see the Folio: The Seattle Athenaeum interview here on YouTube.