The rematch: 6 things to look for in Murray v. McGinn 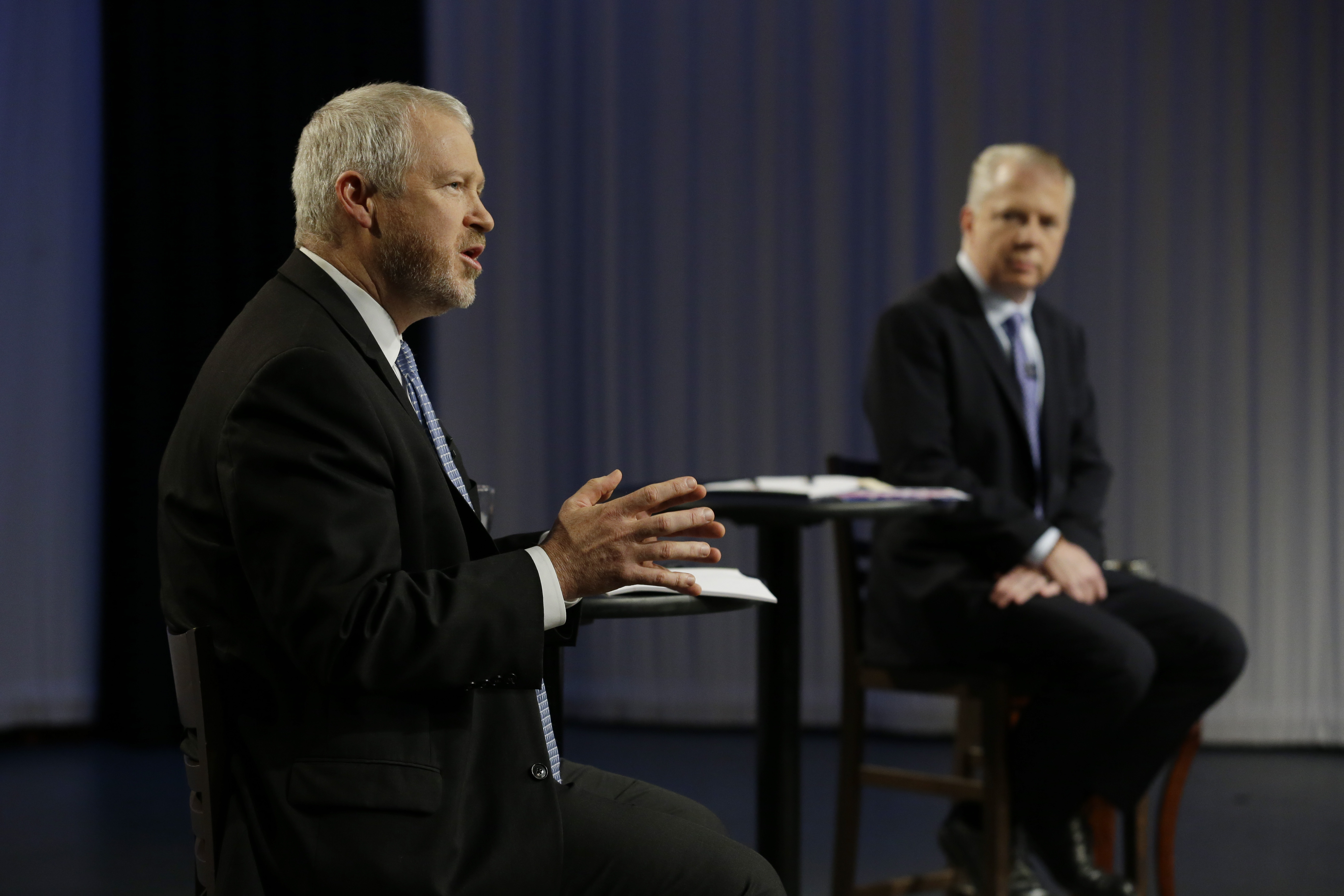 An extra 8,450 votes. That's what former-Mayor Mike McGinn would have needed to win re-election against now-Mayor Ed Murray in the 2013 race. And now that McGinn is running again, that relatively narrow margin will provide a yardstick to measure how much a lawsuit may have hurt Murray, how much Donald Trump's election may have reinvigorated Seattle politics and how much Seattle has changed politically in four years.

McGinn and local news stations' reporters joked easily with each other as they pinned microphones on his lapel in the front yard of his Greenwood home Monday. Like McGinn, many reporters had done this before.

Just weeks ago, Murray was perceived as invincible. Although McGinn said Monday that he would not make an issue of the lawsuit's allegations that Murray had sexually abused a teenager in the 1980s, the former mayor and his campaign staff acknowledged that the new run for mayor had come together quickly. Very quickly.

This race may end up as a referendum on the lawsuit. But if the campaign somehow manages to bring wider issues into view, Monday’s announcement gave us a glimpse of what the race might be about.

There are already, in fact, other candidates in this race. Before McGinn jumped in, attorney and advocate Nikkita Oliver was widely considered the next most likely front runner among Murray's opponents. Her campaign did not respond to requests for comment on McGinn, but his candidacy is hardly good news for her: Her kickoff earlier this month was filled with former McGinn supporters still unhappy with Ed Murray.

The Seattle City Council is now majority female. And four of nine councilmembers are people of color. As a 31-year-old black, mixed-race and queer person, Oliver has launched a campaign that pushes back on what has been a hugely disproportionate distribution of success in Seattle, new investments in police infrastructure and displacement.

Will those McGinn voters who cheered Oliver return to the north ender?

If Mayor Murray had to order a pizza for Seattle, he’d lock dozens of topping experts in a room to determine what kind. It’s the famous Murray Task Force. It’s what he did for what are arguably his hallmark achievements as mayor: the $15-dollar minimum wage and his plan to build more housing, the Housing Affordability and Livability Agenda (HALA).

That Murray likes task forces is something of meme now. For fans of the mayor, this looks like, in the words of Josh Feit, a former city hall reporter turned into a Murray speechwriter, “getting shit done.”

But McGinn has clearly decided it’s also a gap in Murray's armor. While he said he thought the task forces had done some good work, he couched it by saying, “If you want public support for changes in zoning and land use in this city, the public has to be involved. You can’t tell them that a bunch of people in a room made a grand bargain when the people who are most affected … didn’t even have a seat at the table.”

McGinn’s skepticism about the tunnel to replace the viaduct and the agreement with the Department of Justice to reform the Seattle Police Department followed him everywhere toward the end of his term, contributing to the narrative (mostly trotted out by his opponents) that he was divisive and obstructionist. It’s funny, then, that both issues have come to a bit of a head within the last month: The tunnel-boring machine Bertha made it to the other side and the SPD earned a glowing report about its reduction in force.

For Murray and co., the positive news could easily be spun as a “told-you-so” moment: The tunnel is the best option; the DOJ was the best path to reform.

But McGinn has recently repeated that he still believes the tunnel was a bad idea, regardless of its schedule. And on police reform, he’s gone on the offensive: He argued Monday that the substantive and lasting parts of the reform agreement, namely civilian involvement and officer oversight, were the result of his negotiations that, his hesitations aside, produced the agreement.

So where in 2013 Murray and McGinn fought over the future of these two issues, now they’ll fight over their past as well.

Homelessness is getting worse

Before the Murray scandal broke, the mayor’s toughest defense was going to be on homelessness: Since he took office, the issue has only gotten worse. He was getting drilled on it from both the right and left. He has tried to paint himself as walking a “middle way,” but it’s often felt more like he's been caught in a panini press.

This will be precarious territory for McGinn, though: An independent audit of the city’s homelessness systems assailed Seattle’s approach as inefficient and ineffective, which puts the onus on mayors past as well as present for not tackling the problem earlier.

McGinn said several times Monday that Murray had wasted too much time waiting for state and federal resources to tackle the problem. He also called for more flexible housing and a revisiting of Seattle’s policy on moving people from encampments. But McGinn also oversaw these so-called “sweeps” as mayor. And although he said on KUOW Monday he “worked harder” than Murray to make them “compassionate,” he nevertheless saw groups of protesters outside his home.

And Murray has never been shy about blaming his “predecessor” for sticky situations.

Murray has often complained of the bind Washington’s regressive tax system has put him in. That said, he hasn’t gotten behind a recent effort to push an income tax. While a city income tax is almost surely illegal under Washington state law, advocates say if they can get it before a court, it might open new doorways.

McGinn on Monday came out strong for just this approach.

In a sea of Seattle left, it’s the approach that’s often the most scrutinized. Murray has always been cautious: Like the income tax, he also refused to sign a bill to unionize Uber and Lyft drivers that city officials knew would end up in the courts.

Could a more headlong approach do well among voters dissatisfied with Trump?

Seattle has been cruising comfortably at 10,000 feet: fighting back against Trump on sanctuary cities, leading on minimum wage, proclaiming itself as a national example on police reform. But while McGinn maintained some of the lofty discussion Monday, he also mentioned potholes several times. He mentioned neighborhood groups. He name-checked the Greenlake Community Center in his announcement. He even seemed to suggest a slow down on housing policies to allow for more local involvement.

In the de facto political parties of Seattle, some of these ground-level issues have been babies thrown out with NIMBY bathwater. McGinn seems ready to engage on both levels. But McGinn also said Monday he was open to adding duplexes and triplexes in single-family neighborhoods, something that some of Murray's development supporters will see as a dog-whistle to neighborhood advocates.

Likewise, Oliver seems ready to talk about big issues and ground-level concerns, promising that the new Seattle Peoples Party will pursue "a solution-based agenda which focuses on the issues faced by everyday working people."

McGinn's slogan, Keep Seattle, is meant to be finished with "affordable" or "diverse" or "livable,"  all noble goals. But it's also got just a twinge of nostalgia to it. Whether that was intentional or not, who knows? But if McGinn is to have a shot, nostalgia might have to be part of his formula.