Theater blows out the fourth wall for David Byrne's musical 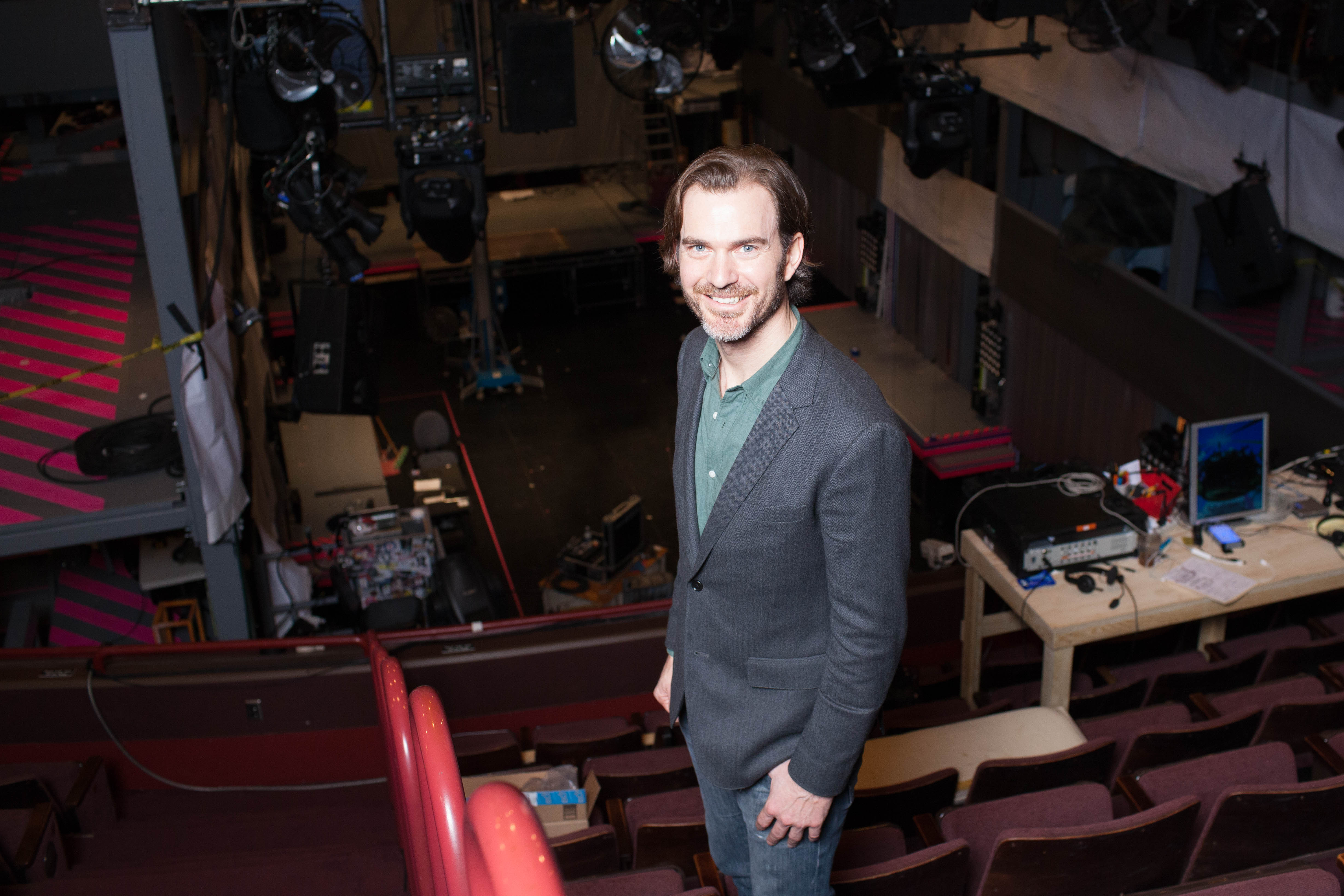 The other day, somewhere between tech run-through and dress rehearsal at Seattle Repertory Theatre, Braden Abraham was, in his words, “feeling good.” Huge sections of seating had been pulled out from the Bagley Wright Theater’s main level. And what used to be an ordinary-looking stage was now a cavernous performance area: two towers of seating; a huge backdrop of TV monitors; enough lighting suitable for a rock concert; a bigger-than-usual sized disco ball.

Picture a home remodeling project that tears out the living room and puts it where the kitchen used to be. And then, the room is outfitted to the max. That’s essentially the radical transformation that’s been unfolding inside the Bagley Wright over the past several weeks. When "Here Lies Love" opens April 7, it will be the most expensive show ever produced in the Rep’s 54-year history.

“If you’ve seen 100 plays in this space, you want to see something different,” Abraham said, yelling at times so his voice could be heard over a crew that continued to drill and build the enormous set. The Rep had to hire an architect as well as a structural engineer for this show. The company is spending 4 times what it usually spends on a production. (Jeffrey Herrmann, the Rep’s managing director, declined to give the actual production costs. But the theater set a $500,000 fundraising goal for Here Lies Love, which they’ve surpassed, Herrmann said.).

“All worthwhile endeavors require risk,” said Abraham, the theater’s 40-year-old artistic director. “Everybody felt this was a risk worth taking.”

The Rep’s gamble centers on a 2013 musical created by David Byrne (yes, that David "Talking Heads" Byrne) and the DJ/musician/producer Fatboy Slim. "Here Lies Love" traces the rise and fall of Imelda Marcos, from beauty pageant queen to charismatic and notorious first lady of the Philippines. The production is set entirely in a disco (Marcos loved frequenting Studio 54 as well as dance clubs all over the world; she also outfitted her Manhattan apartment with a disco ball). The show’s title is the purported epitaph Marcos has requested for her grave.

Abraham saw the show, called “an exciting new poperetta” by the New York Times, when it played New York’s Public Theater in the summer of 2014. He was completely floored.  “A sensory experience,” Abraham recalled, about a production that revolves around a standing, often dancing, audience. “You were in this world, in this club atmosphere, in this very, very theatrical experience. And that’s hard to pull off.”

Abraham returned to Seattle and started plotting, wondering if it would be possible to completely overhaul Bagley Wright’s proscenium. And as it turned out, Abraham said Byrne and show director Alex Timbers were also scheming about finding ways to make their show “more produceable” to take on the road.

The Rep’s production is the much-anticipated creative experiment in that regard, with theater producers from across the country flying in to see the show, Herrmann said. The Rep is also banking on "Here Lies Love’s" appeal to a younger — and browner — audience. Seattle’s Filipino community dates back to the late 1880s. The show features a largely Filipino and Filipino-American cast (including Conrad Ricamora, best known as the character Oliver on the TV show "How To Get Away With Murder").

“As an artistic director, you want to do projects that push you into unknown territory,” Abraham said, standing in a theater that will now accommodate 300 people fewer than usual. To compensate, the Rep is hosting the show for a longer-than-usual seven-weeks run.

“We’re in it for the long game,” Abraham said. “We may not completely pay off the run but there could be life [for this production] after this.”