The Northwest may get its own Keystone XL, But it's XXL 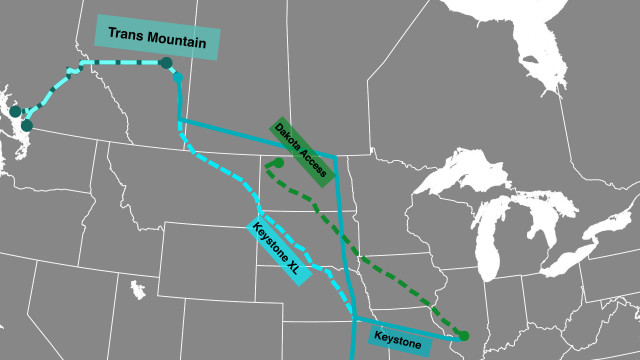 An expanded Trans Mountain oil pipeline could carry 890,000 barrels of crude a day, more than the controversial Keystone XL and Dakota Access pipelines.

You’ve heard of Keystone XL, the controversial pipeline rejected by the Obama administration but approved last month by President Trump.

And you know all about Dakota Access. That’s the oil pipeline that became a rallying point for Native American rights and environmental activism.

It’s expected to be up and running later this month.

But have you heard of TransMountain, which could soon be the biggest pipeline of them all?

There’s actually been a TransMountain Pipeline for decades, running from Canada’s interior to the Pacific coast. Kinder Morgan, the Houston-based energy infrastructure company that owns the pipeline, has plans to make it bigger. Much bigger. But environmentalists and British Columbia’s First Nations Indian tribes have launched lawsuits and promised North Dakota-style protests.

I live in the United States. Why should I care about a pipeline in Canada?

The new pipeline would mean Kinder Morgan could transport 890,000 barrels of crude through the Pacific Northwest every day. That’s more than Keystone XL and more than Dakota Access; it’s enough oil to meet about four percent of the U.S.’s daily gas consumption.

Some of that oil would go to the four big refineries in Washington that produce gasoline for the Pacific Northwest. The rest would be loaded onto tankers just outside of Vancouver, British Columbia, and shipped to California and Asia. That would mean seven times as many tankers in the Strait of Juan de Fuca.

Where’s all this oil coming from?

The oil would come from the Alberta Oil Sands, the third-biggest known crude oil reserve in the world.

So, what’s the plan?

The plan is to build a new 600-mile pipe that would run roughly parallel to the existing pipeline, tripling its capacity. Oil would flow through both pipes. Kinder Morgan would also build 12 new pumping stations to move the oil along.

Companies like BP Canada, Suncor, and Tesoro have signed contracts to rent space in the pipeline.

I’ve heard that environmentalists are opposed to the plan. What’s their thinking?

But the government says the pipeline expansion fits within the emissions reductions target the country signed onto in Paris. It says emissions reductions can be made in other sectors like transportation and buildings to offset the increased extraction emissions. And, because most of the oil will be burned in other countries, those greenhouse gases won’t count as part of Canada’s contributions to climate change — a point of contention with the environmentalists who oppose the pipeline.

Then, there are orcas. Environmentalists say increased ship traffic would create more underwater noise that could push the beleaguered southern resident orca population over the edge.

And, finally, there’s the risk of a goopy bitumen oil spill. Vancouver’s government worries that such a spill wouldn’t just be a mess to clean up; it could be a mess for the city’s economy as well.

How likely is a spill, anyway?

Since it was built in 1953, Kinder Morgan has reported 82 spills to Canada’s National Energy Board, most of them at pump stations or terminals. The biggest was a 1985 spill that leaked 10,000 barrels of oil.

In both 2005 and 2012, the pipeline ruptured less than ten miles north of Washington. Kinder Morgan was criticized for its delayed response to those spills, the first of which leaked 1,500 barrels of oil into a stream and surrounding wetland.

Other spills in the past decade include two ruptures at terminals near Vancouver, including one that leaked oil into the Burrard Inlet.

Kinder Morgan is beefing up its ability to respond to leaks and ruptures by building five new “response bases” (three of them staffed around the clock) and stationing new employees and vessels along British Columbia’s shipping lane. And Canada’s National Energy Board is requiring the company to develop a marine mammal protection program.

But pipelines are still safer than trains, right?

Probably, although some studies indicate that, while rail spills are more frequent, pipeline spills are bigger.

What do Canada’s First Nations say about all this?

About 130 of Canada’s First Nations are in some way affected by the pipeline. Some of them are on board with the expansion: Kinder Morgan has signed more than 50 mutual benefit agreements with First Nations.

But other First Nations — most notably those with the Union of British Columbia Chiefs — are opposed to the plan.

“This is not just our backyard; this is literally in our kitchen,” Charlene Aleck, of the Tsleil-Waututh First Nation, told the CBC. The Burrard Inlet, where oil tankers dock, is part of her nation’s traditional territory. “It’s definitely the beginning of a long battle.”

How soon could this thing be built?

The project has a lot of the approvals it needs: Canada’s National Energy Board, which regulates fossil fuel companies; Canada’s government; and Canada’s prime minister have all given the project their blessing. Trudeau responded to criticism by saying, “There isn’t a country in the world that would find billions of barrels of oil and leave it in the ground while there is a market for it.”

Kinder Morgan could begin construction this September as long as it meets the government’s 157 binding conditions that address “potential Indigenous, socio-economic and environmental impacts.” The earliest the new pipeline would be up and running would be the end of 2019.