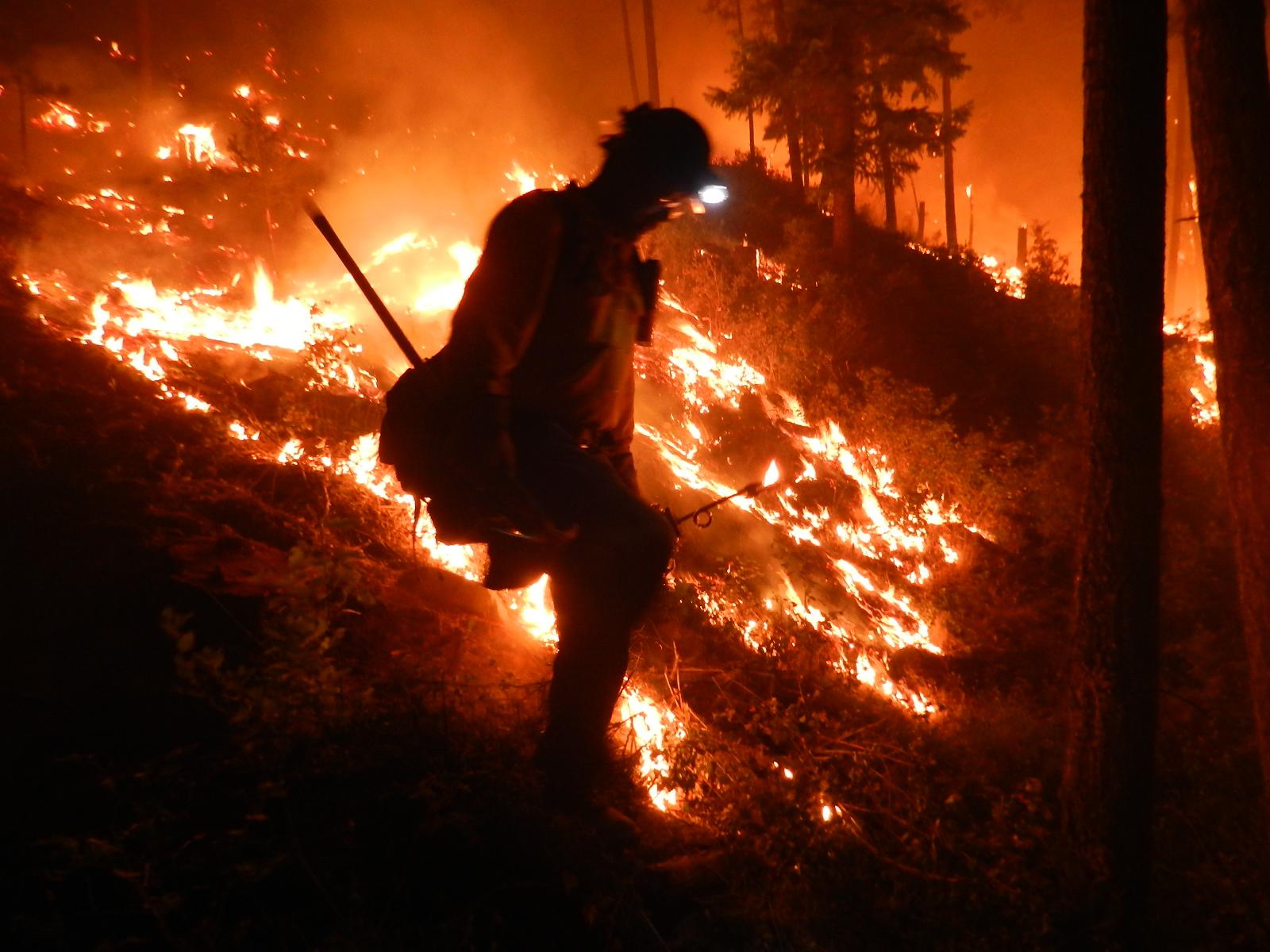 A Navajo Hotshot firefighter battles the 2013 West Mullan Fire in the Lolo National Forest in Montana.

Bipartisan. Unanimous. Two words not heard often in contemporary politics describe a pair of bills passed by a divided Washington Legislature to revitalize forests in the face of climate change and megafires that have killed firefighters and cost the state millions of dollars.

Now comes the real test: Will the Legislature provide the money needed to carry out these plans? The same test confronts high-profile efforts to restore Washington ecosystems in coastal and flood-prone areas. Most at risk is the restoration program for flood-prone regions, which could lose more than half of its funding under the Senate’s budget plan.

In yet another difficult year for legislators beset by a court order to spend more on education and plaintive pleas to shore up a decrepit mental-health system, environmentalists are surprisingly upbeat based about what they’ve seen so far in the House and Senate budget proposals.

“We’re feeling good that the [forest] bills received unanimous support. Now we hope the Legislature will come through with the capital funding needed to [do] the work on the ground,” said Tom Bugert, the state legislative affairs director for The Nature Conservancy.

Restoration and cleanup programs have struggled over the last two years when the largest source of tax dollars for much of the state’s restoration efforts dropped dramatically with the price of oil. Conservationists are now too cautious to count their restoration victories as won, but are guardedly optimistic going into budget negotiations.

Here’s how prospects for funding major restoration programs are shaping up.

Based on the findings of a 2014 study by the U.S. Forest Service and The Nature Conservancy, the bills seek to diversify the state’s forests.

“A lot of our forests are all essentially monochromatic … like a giant box of matches waiting to catch on fire. Healthy forests are more patchwork — there’s clumps, there’s gaps,” explained Bugert. He added that the study is unique because it was the first time all forest lands in Washington — state, federal, private and tribal — were included in such an overview, giving the clearest picture to date of the health of Washington’s forests.

More than a quarter of Eastern Washington’s forests need some form of care to make them less vulnerable to insects, diseases and wildfires. The needed treatments include thinning, controlled burning and ensuring variety when planting new trees. Many of the problems stem from more than a century of misguided fire-prevention efforts that failed to let blazes perform their natural function of cleaning out forests periodically.

With the added challenges climate change will bring, including hotter and drier summers, the need for forest care is likely to increase. The study by the Forest Service was released before the major fires of 2014 and 2015, which changed the makeup of the forests. But those large fires underscored what the report already said: Washington needs to improve the health of its forests.

Two back-to-back seasons of massive fires in 2014 and 2015 endangered public safety, caused three firefighter deaths and came with a price tag of at least $140 million. Statewide awareness about the threat of wildfires has increased, along with interest in cooperation on solutions to limit the damage of wildfires, according to conservation groups and Sen. Brad Hawkins, a Republican from Wenatchee who sponsored one of the forest-health bills.

The Forest Service study shows how investing in forest health can prevent large-scale wildfires or at least make them less cataclysmic. Its conclusions have guided the two bills calling for investing more money in forest health programs under the Department of Natural Resources in a year where extra budget money is difficult to come by—no small feat.

“It feels like we’re at a watershed moment for our state for forest health,” said Bugert. “I think we are starting to realize the scale of the problem and that we all need to work together to get something done.”

Conservation groups, timber and farming associations, and tribes all showed their support for both restoration bills early in the session. HB 1711, sponsored by Rep. Joel Kretz, a Republican from Okanogan County, increases the pace of restoring state-owned forest lands, requires the Department of Natural Resources to come up with a list of what lands should be prioritized and creates a new fund to ensure state-owned forests continue to produce revenue.

SB 5546, sponsored by Hawkins, lays out a more ambitious plan. Of the 2.7 million acres of forest in need of restoration, Hawkins’ bill directs the Department of Natural Resources to ramp up its forest-health efforts by treating 100,000 acres of forest annually over the next 16 years.

It also creates a forest health advisory commission within the Department of Natural Resources with representatives from local communities and industries.

While lobbyists and lawmakers in Olympia agree the measures passed by the House and Senate are the solution to wildfires, things get a little muddier in the scientific community.

Dominick DellaSala, a forest and fire ecology scientist and president of the Geos Institute in Oregon, says the bills don’t do enough to promote using the best available science. He takes particular issue with Kretz’s legislation, which focuses on forests owned by the state and establishes a fund in the treasury for forest health restoration efforts on state lands. The way the bill is written, he says, will prioritize logging.

“If the real concern is we don’t want big, high-intensity fires, logging is not going to solve that issue,” DellaSala said.

Mitch Friedman, executive director of Conservation Northwest, one of the groups that backed both bills, doesn’t see a dangerous prioritization of logging.

He said the state has seen a lot of collaboration among timber groups and environmentalists. “In Washington … we’ve built trust and a common view of what the science says,” he said. “We tend to agree on what should be logged and what should not.” He added that the interpretation of both laws will be up to the Department of Natural Resources.

“Can DNR come up with a method that’s true to both bills that’s efficient and gets the job done?” Friedman asked. “I think so.”

The two bills anticipate and encourage a bump in tax dollars for forest health efforts. Both the House and Senate budget proposals have upped forest funding from the previous budget, which was $10 million. This year the Senate proposed $15 million for forest health, and the House proposed $18 million (with $5 million of that going to a controlled-burn program in the Department of Fish and Wildlife). Given the unanimous support of both bills, environmentalists are optimistic that the funding for the Natural Resources Department will be included in the final budget.

Bugert says The Nature Conservancy is closely watching the funding for the Fish and Wildlife burn program. Prescribed fire, as it’s called, is not something that Natural Resources’ wildfire program has done in the past, so the organization is eager to keep the Fish and Wildlife program alive, and one more forest health tool on the table. The Senate’s lack of any tax dollars for the program, he says, is a cause for concern.

“We want to make sure it at least stays on life support,” Bugert says.

In the shadow of Mount Rainier, hundreds of residents of the little town of Orting experienced two evacuations due to large floods of the Puyallup River in the late 2000s. But three years ago, when the river threatened to flood again, no evacuations were necessary, thanks to a construction project that had moved the city’s levees back and expanded the floodplain.

The project was funded through Washington’s Floodplains by Design program. It’s designed to simultaneously reduce flood risk, restore salmon habitat and protect agricultural land — and end instances when a lack of coordination led to projects where the aims conflicted with one another.

Now, the Floodplains by Design program coordinates efforts so that a single project might accomplish multiple goals across a watershed using less money. The levees in Orting are an example. The project increased salmon habitat, protected the community and created a new park.

There are always more project requests than money to go around, said Scott McKinney, leader of the floodplains program at the state Ecology Department. Since 2013, the floodplains program has received $85 million that supported 29 projects. This year, the House has proposed $50 million in funding, while the Senate has proposed just $16 million, less than half the previous budget allocation of $35.5 million.

As the climate changes, scientists say, sea levels will rise and heavy rains will increase, compounding the risks. The more of these projects that are funded, the more stable Washington’s flood-prone communities will be, says Curt Hart, spokesman for the Ecology Department.

Restoring and preserving the coasts

The Quinault Indian Nation on the Olympic Peninsula set fire to the Moses Prairie for the first time in more than 100 years last September. The burn was intentional, and part of a restoration project to improve the production of natural plants like berries and stimulate local wildlife on the 200-acre coastal prairie.

The Moses Prairie burn was a project of the Washington Coast Restoration Initiative, a small, two-year-old state program. This year marks the first time the Legislature will decide whether to continue the work. And the nascent program appears to be in luck. Both the House and Senate budget proposals finance the program at close to its original $11.7 million budget from 2015, with the House proposing $10 million and the Senate proposing $12.5 million.

“It is one we’re feeling quite confident about its success at end of session,” says Bugert of The Nature Conservancy, which developed and successfully pitched the program to the state two years ago. The organization now helps manage and facilitate project requests.

The program creates jobs in coastal communities where they can often be hard to come by.  The program also aims to preserve some of the state’s most pristine salmon runs and protect local communities from the potential impacts of climate change.

Bottom line: In the end, the Legislature still has a long way to go to resolve differences over the budget, with initial House and Senate proposals looking vastly different. Things often shake up in budget negotiations, so no program is considering its funding secure yet. Budget proposals out of the House and Senate that are within a few million dollars of each other are a good sign for coastal restoration and Natural Resources’ wildfire prevention program. But flood prevention and funding for Fish and Wildlife’s controlled-burn program remain up in the air.

This story is part of InvestigateWest’s Statehouse News Project, a crowdfunded effort to provide independent reporting on the Legislature. Please support the project with a tax-deductible donation at invw.org/donate.