Washington river among the nation's 'most endangered' 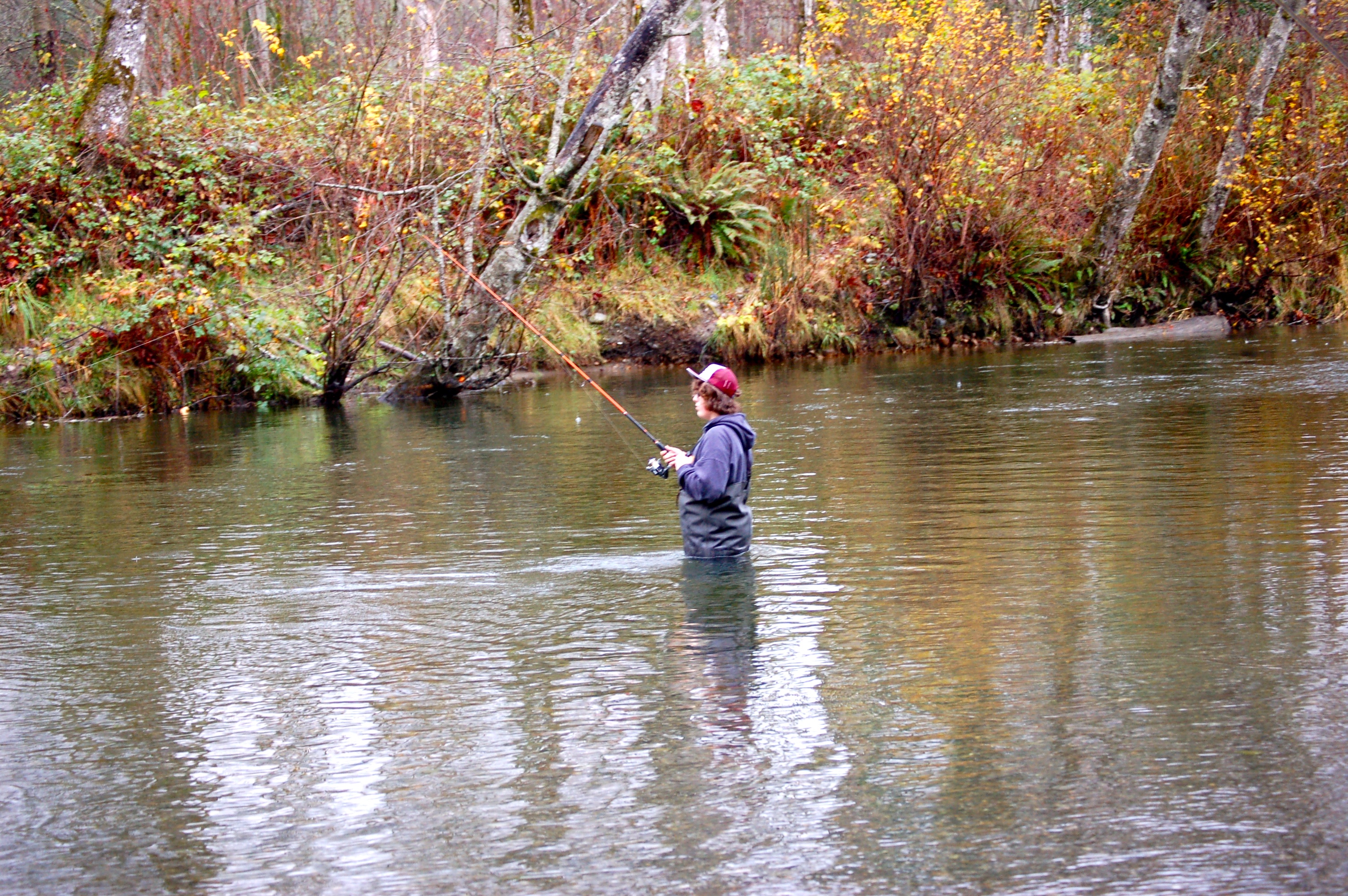 Fishing in the Skykomish River

It’s back. Actually, it never left. The Snohomish Public Utility District still has a plan to divert part of the South Fork Skykomish River above Canyon Falls, near Index, run it through turbines to generate 30 megawatts of power, and then return it to the river bed below Sunset Falls.

Five years ago, the Sunset Falls proposal landed the South Fork Skykomish on American Rivers’ annual list of the nation’s most endangered rivers. The PUD’s preliminary permit extension has expired but the utility may file a construction permit application with the Federal Energy Regulatory Commission (FERC). The river protection group just returned the South Fork Skykomish to its list, at number three.

The PUD isn’t proposing a dam. And an earlier element of the plan, installing an inflatable weir above the falls, has been abandoned. So, the river would not be blocked; it would be partially “de-watered.”

Critics argue that even reducing the river flow with the new plan would threaten the fish populations that spawn above the falls. “The Tulalip Tribes of Washington and the Snoqualmie Indian Tribe have each submitted comments to FERC urging it to deny the hydropower license because of the expected adverse impacts to fish and wildlife,” American Rivers says in its press release, “including federally threatened salmon species and winter steelhead, as well as endangered bull trout.”

They also claim that it would threaten the aesthetics of a river that the Mt. Baker-Snoqualmie National Forest’s plan recommends for Wild and Scenic status. “If there’s one place where there shouldn’t be” a hydro project, says Andrea Rodgers of the Western Environmental Law Center, this is it.

And critics say that getting power from Sunset Falls wouldn’t pencil out. “It doesn't make any sense on any level,” Rodgers says, “yet the PUD is continuing to pour money into it.” In American Rivers’ press release, the organization notes that “if the project is licensed and installed, Rocky Mountain Econometrics (2013) estimates that the power it produces will be two to three times more expensive for ratepayers than if [the PUD] were to buy the power from the grid.”

The BPA has no power left to sell, says PUD communications official Neil Neroutsos. “We've taken all the Bonneville power we can take.” The population of Snohomish County is growing rapidly, Neroutsos says, and the PUD has consequently been trying to diversify its portfolio. “We want to meet our load growth through conservation and then a mix of renewable energy sources,” he explains.

The Sunset Falls project may fit into that plan. Or it may not. "The decision [to apply for a final permit] hasn't been made,” he says.

Meanwhile, the PUD continues to negotiate with a group of agencies, tribes and non-profits, including the United States Fish and Wildlife Service, the Washington Department of Ecology (DOE), and the Tulalip Tribes. If FERC reviews a final permit application, it will have to take public interest into account. That will bring up, among other things, the fact that the Northwest Power Planning and Conservation Council has designated the river as a protected area. The real crux of the negotiations, though, is the minimum flow requirement that DOE established decades ago. Insist on those minimum flows and the Sunset Falls project presumably loses money. But can you reduce the flows without harming the fish that migrate downstream or the resident fish that live between the falls?

The permitting process and negotiation have dragged on for years. This isn’t unusual. Some interest groups would like to streamline FERC approvals, reducing the ability of other agencies and groups to raise objections. Legislation introduced in Congress last year would have done just that. The Snohomish PUD supported the bill, and there is talk of introducing an altered version of the bill this year. Just recently, President Donald Trump cited the handling of hydro projects — which he called a “great, great source of power” — as one of the processes that have been hamstrung by excessive regulation. “We don't even talk about [hydro] any more because the permits are virtually impossible,” Trump said. So, in the future, it may be possible to skip a lot of those lengthy environmental arguments. But treaty rights are presumably here to stay.

Would it make any sense to tamper with the existing flow requirement? Daryl Williams, the environmental liaison of the Tulalip Tribes, says they are trying to design a study that would show exactly where the breaking point, below which fish are harmed, actually lies. In the absence of new data, though, he says, ”The amount of water that fish need is something that I don't think has changed."

Those fish don’t get above the falls by swimming. Historically, there was a lot of potential salmon habitat upstream, but no migratory fish. The state started trapping fish below the falls and hauling them upstream back in the 1950s. Virtually everyone involved thinks the trap-and-haul facility needs work, and the Sunset Falls proposal includes money to renovate it.  (The fish travel downstream through the falls on their own.) But why make a fuss over fish that live someplace nature never intended?  The habitat above Sunset Falls has been better protected than most places in the Snohomish River system.  And the fish include members of populations that are considered threatened or endangered.

In some years, says Williams, “half our chinook production for the entire [Snohomish] river system comes from above those falls. Currently the habitat above the falls is the best habitat in the entire Snohomish system.” Rodgers says something similar.  So many other areas have been so degraded, she says, that the South Fork is "the last shining star in this watershed."