West Coast to Trump: It's time for a divorce 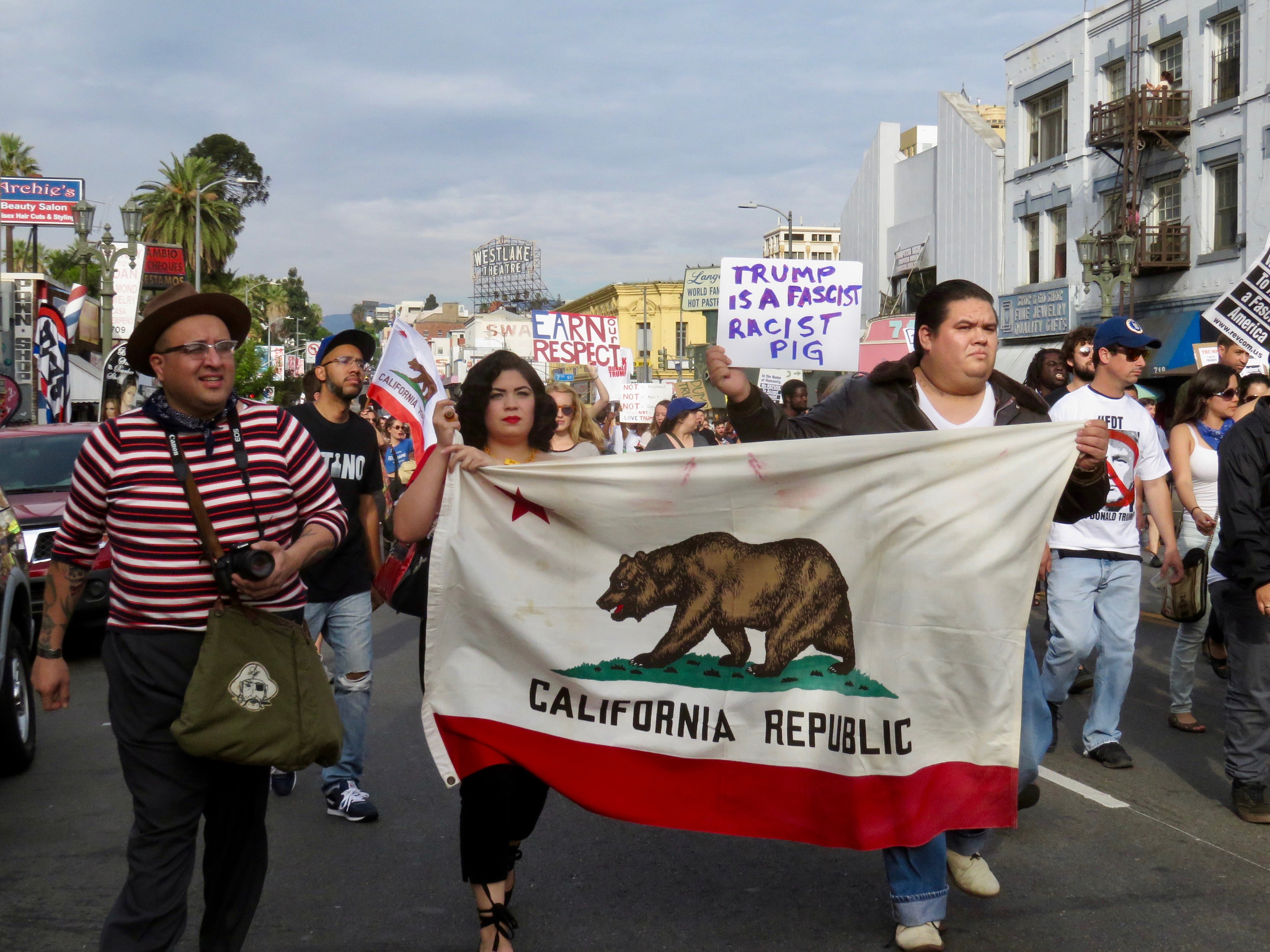 Driving from Seattle to southern California, one is reminded of the ongoing tectonic shifts in the landscape that have shaped us — rippled hills, volcanoes and faults line the way. Such is life on the Pacific Coast. But it’s the reactivated political fault lines we should pay attention to.

Secession is in the air on the West Coast. In Washington, several legislators east of the Cascades this legislative session submitted their periodic, go-nowhere proposal to break the state in two, making the new state of Liberty.

In southern Oregon and Northern California, there is the longtime movement to create the so-called State of Jefferson, notably visible on a hay barn I-5 sign south of Yreka and on Oregon’s Jefferson Public Radio emanating from the car radio. Those are the kind of right-wing, leave-me-alone movements that have typically marked the secession efforts.

And in what could be the political equivalent of the seismic Big One, there have been multiple recent proposals for California to secede or break up, a movement known as Calexit. A so-called Yes California campaign — which carried some progressive overtones — had until this month been seeking a ballot measure to get voter approval in 2018 for a plebiscite the following spring on making California an independent country. Boosters of the measure even opened a California “embassy” in Moscow. However, their Moscow “ambassador” has dropped the effort to stay in Russia. Yes California’s vice president has told The New York Times that a new secession campaign — with a new petition and backed by a revamped pro-secession group called the California Freedom Coalition — will be unveiled early next month. Secession is never without bumps, but it is bouncing along.

Separatism is deep in Pacific Coast DNA. Not only did the U.S. tear off California from Mexico but soon after settlers looked at lopping it into more manageable chunks. The first idea to create a separate state out of northern California and southern California dates to 1854. Prior to the Civil War in the late 1850s and early ’60s the idea of creating a new country out of the West Coast, a Pacific Republic, was floated. The ground has been shaking periodically ever since.

U.S. secession movements seem unrealistic today — remember the Civil War — but then, so did the U.S. Senate committing suicide by using the “nuclear option” on Supreme Court appointments, or a White House committed to “devolution” of the federal government. We live in times where tensions stoke secession talk.

Trumpism is both a precursor and an accelerant. Most secession movements are steeped in conservative thinking and the hope of shrinking political units to gain more local control and “bring government closer to the people.” Secession movements and whispers are also launched in places and times where and when folks feel aggrieved.

The Pacific Republic movement of the mid 19th Century was fired by frustration that California wasn’t getting value from the federal government for all the gold it was sending back east. The State of Jefferson cause erupted in the pre-World War II 1940s because local officials believed their rugged region wasn’t getting investment from the state in infrastructure like roads. Secessions tend to spring up in borderlands — areas geographically, economically and psychographically on the periphery.

The majority of the “Jefferson” counties in Oregon and northern California and those in the state of “Liberty” in Washington voted for Donald Trump. Most are rural, and their complaints about federal and state government are in sync: too expensive, too remote, out of touch with local needs, too much rural economic hardship, too many environmental regulations and limits on exploiting public lands.

California’s independence movement is a mixed bag but also has impetus from Trumpism. The state has been standing up to the new administration on immigration and climate change, and is one of the world’s biggest economies. Some progressives would like to see the Golden State or the West Coast tell America to bugger off. Greens have long dreamed of a Northwest Ecotopia or Cascadia.

But the real lifeblood of Calexit comes from the right. National Republicans would love to see Democrats lose California’s electoral votes. Some tech libertarians like the idea and see an independent California as a place where free-market libertarianism could run rampant. Politico recently noted that many of the Trump advisors who preach a new nationalism have ideological roots in California, rebels against the multicultural progressivism it represents.  California, not the Midwest, they argue, is the cradle of Trump nationalism.

An alternative vision to full independence, and a less heavy lift, is chopping California into new states. Britain’s Brexiteer Nigel Farage supports splitting California vertically into two states, and according to Breitbart has helped raise $1 million for the cause. An opinion piece in the conservative Washington Times described the two-Californias strategy as “a virtual windfall” for Republicans.

Another recent concept envisioned California divided into as many as six states. Forget gerrymandering Congressional districts, all-new states could accomplish even more: getting two new U.S. Senate seats per state no matter how small or unpopulated, and almost certainly more Electoral College votes for the GOP.

Despite all the arguments, secession talk at root is mostly about feeling. Reinforcing regional identity, for one thing. Populist pouting and posturing for another. During the brief State of Jefferson secession movement of the 1940s, it turned out that, despite the proponents’ feeling of being neglected, counties in northern California actually received more money from the state than they contributed. True of many Red and restless rural counties today.

In 2014, an updated analysis in the Humboldt Journal of Social Relations of the “Jefferson” counties in California and Oregon found that a majority received nearly 50 percent or more of their revenues from their respective states. Statehood, in others words, likely would mean cuts in services and fiscal hardship.

Some would argue that secession talk is a cry for help, or attention. University of Oregon Journalism professor Peter Laufer has written about Jefferson and wandered its mountains, backwoods and bays. In a 2014 story, “All We Ask Is To Be Left Alone,” he wrote that periodic secession talk was a good thing: “It allows peeved locals to air complaints even as it offers an entertaining story that the rest of us can relate to — we all, at one time or another, want to fight city hall.” Rebellion, especially in the West, has an enduring appeal.

Calexit talk might be that peevishness on a grand scale. But these days, ground-shifting, conventional wisdom-defying mischief is being made with real, global consequences. Alliances are up for grabs, autonomy is unsettled, borderlands are being redefined by walls, and nationalism and regional identity are resurgent with “the primal scream of blood and soil.”

With Brexit, Trump and Calexit, it looks like it's springtime for secession. Or talk of it anyway.