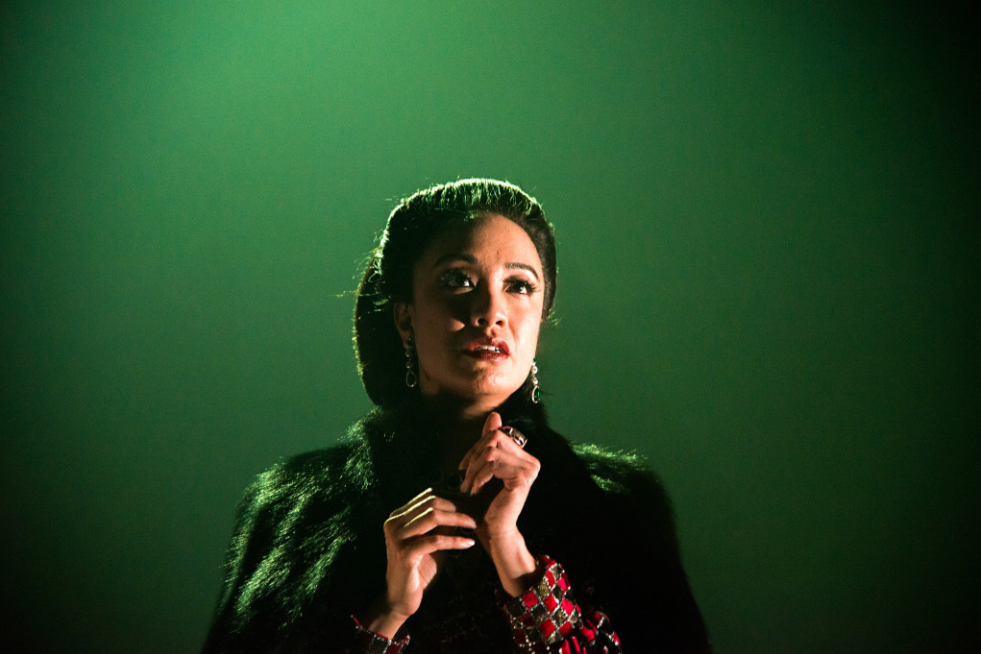 It was with great trepidation that I went to see Seattle Repertory Theatre’s Here Lies Love, the musical about the rise and fall of Imelda Marcos, wife of the infamous Philippine dictator Ferdinand Marcos.  Last January, I decided to work with the Seattle Rep to figure out how to utilize the play to educate people about the various themes it raises. As an activist in the U.S.-based anti-Marcos movement during the 1970 and ‘80s, I and others from that movement placed our trust in Seattle Rep’s leadership that this play would not glorify Imelda and that it would bring opportunities to educate audiences.  The discussions in the Filipino community raised before the play’s opening served to signal that the play would be controversial.  Were we putting our reputations on the line?

Here Lies Love does not disappoint.  The disco setting, complete with a revolving disco ball and techno music, prompted this reaction from a friend: “I feel as if I was back in a gay New York disco.”  The production is fun and entertaining with a groundbreaking cast of talented Filipinos. But the projections on the multitude of screens coupled with the song lyrics and story line countered another message: not all was fine in the Philippines as the Marcoses rose to power.  Midway through the 90-minute play, the party was over and scenes from the First Quarter Storm and “Battle of Mendiola” protests, as well as scenes from the Plaza Miranda bombing signaled the intensification of mass opposition to the Marcos regime’s policies. Hundreds of students demonstrated against martial law and repressive measures that would last 14 years.

In his Here Lies Love, creators David Byrne and Fatboy Slim deliver an Imelda who uses her beauty and personality to help her husband amass support from the Filipino people.  She traveled the world meeting with renowned world leaders on Marcos’s behalf because he couldn’t due to ill health.  But Imelda’s ostentatious lifestyle and her dream-like world view soon made people realize that she lived in a totally different world where she viewed the Filipino people as her children.  Imelda’s song towards the end of the play, “Why Don’t You Love Me?” shows her simplistic summation of a world she can’t comprehend after she, “gave them everything.”

It’s true that I know more about the Marcos regime than most.  My brother, Silme Domingo and his colleague, Gene Viernes, were murdered in 1981 in Seattle as they worked in their union office in Pioneer Square.  Both were officers of the Alaska Cannery Workers Union, Local 37 of the International Longshoremen and Warehousemen’s Union, as well as leaders in the U.S.-based anti-Marcos movement.  As a result of their work in building solidarity between the U.S. progressive labor movement and the repressed Philippine labor movement, they were targeted for assassination by the Marcos regime.  In 1989, through the work of the Committee for Justice for Domingo and Viernes, the Domingo and Viernes families won a landmark civil suit in federal district court, winning a $23.5 million judgement and holding Ferdinand and Imelda Marcos responsible for the murders.

It is my hope that those who come to see Here Lies Love will be interested in finding out more about the true nature of the Marcos dictatorship and the more than 30,000 people who were killed, tortured and falsely imprisoned during the Marcoses’ 20-year rule.  Some say the play doesn’t go far enough or that we Filipinos need to write our own stories.  Both are true but in the meantime, Here Lies Loves opens the door in a very populist way to a history that most do not remember or know about.

This history remains more important than ever as the Marcoses try to return to power in the Philippines.  The Marcoses' money, billions stolen from the Filipino people during their rule, assisted the current Philippine President Rodrigo Duterte into power and, thus, his war on drugs that has resulted in more than 7,000 extra-judicial killings.  In that election, Bong Bong Marcos, Imelda and Ferdinand’s son, narrowly missed being elected Vice President and could claim that mantle if his appeal for election fraud is successful.  Imelda remains a Congresswoman and daughter Imee a governor.  Without a thorough summation and an institutionalization of the corruption and destruction of the Marcos regime in the minds of the Filipino people, history may repeat itself.

Cindy Domingo remains active in the Philippine solidarity movement and traveled to the Philippines in the last national election as an official election observer. In 2016, Cindy coauthored a story in the book, Women Against Marcos: Stories of Filipino and Filipino American Women who Fought a Dictator by Mila De Guzman, chronicling her history in the anti-Marcos movement and her role in the struggle for justice for her brother, Silme Domingo and Gene Viernes. Cindy is co-editor of an upcoming book to be released by UW Press this fall, A Time to Rise, Collective Memoirs of the Union of Democratic Filipinos (KDP).