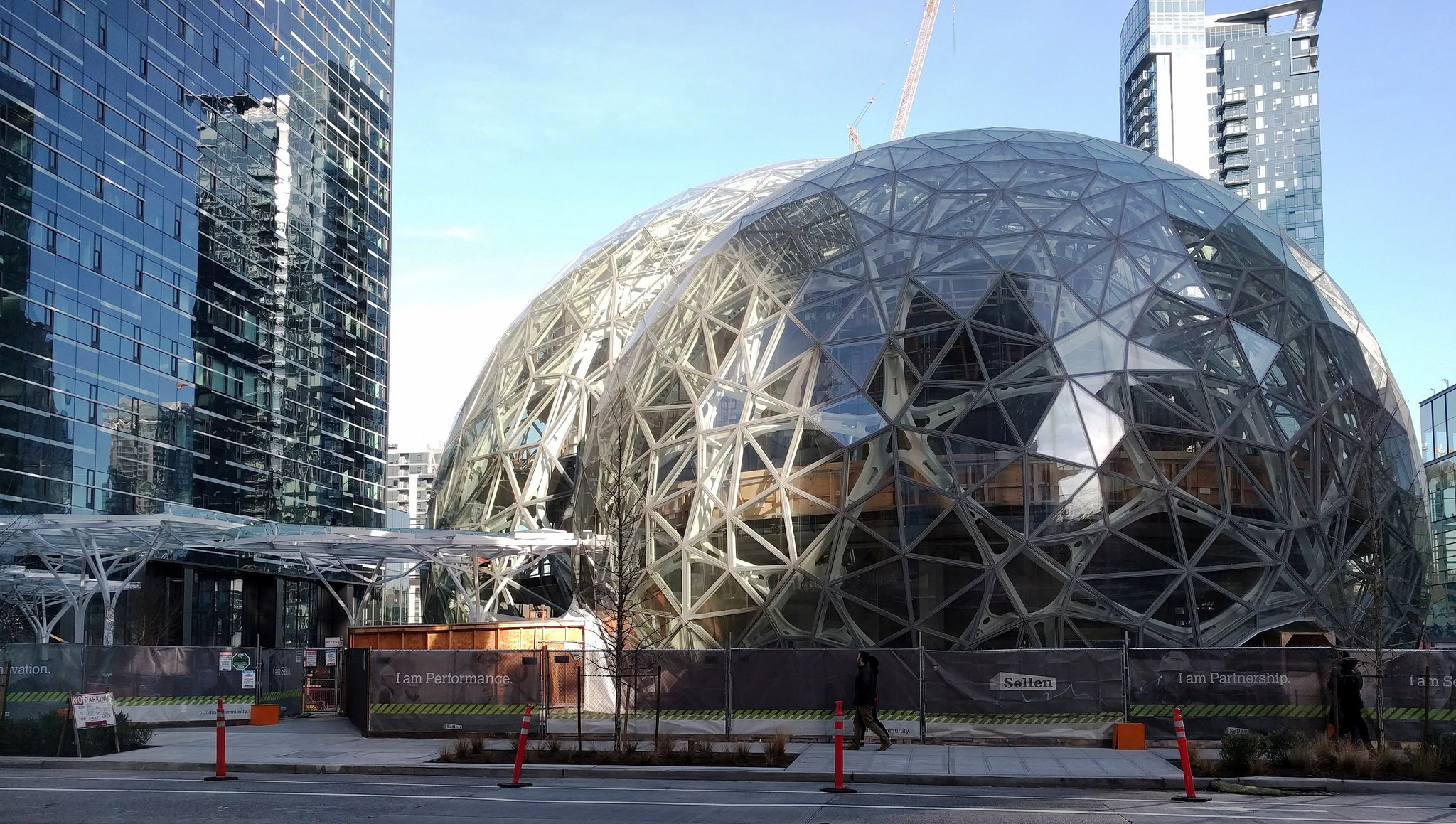 In March, a software consultant in Seattle received a job posting for a development engineer position at a large local tech company. The email came from an outside recruiter. Most of it was normal, but in the final line, something stood out: Applicants, it read, should have a minimum five years of experience and “less than 20 years of experience.”

The consultant had never seen anything like maximum experience on a posting before. It struck him as overtly ageist. Representatives from the Seattle Office of Civil Rights and the Federal Equal Employment Opportunity Commission agree.

The company with the opening? Amazon.

After a reporter raised questions with Amazon about the posting, a spokesperson initially denied it was for one of its positions or that Amazon had any relationship with the recruiter who had distributed it. However, when it became clear the recruiter had, in fact, been providing job applications to Amazon, the local tech giant quickly cut ties with the outside recruiting company that had come up with the language.

Still, the posting raises disturbing echoes of the age discrimination issues and controversies that have faced much of the tech industry. And when asked how Amazon would have known about the discriminatory posting without the aid of a reporter, the company did not respond.

The job posting for an Android software development engineering position in Seattle — forwarded to the local consultant with a friendly greeting — came from a Virginia-based recruiter, qphase Technologies Inc. Nevertheless, the job itself was, as the local consultant believed from an initial reading of the description, for a full-time position with the commerce giant.

Tech recruitment is a disparate and complicated web, of which qphase is a very small part. Its relationship with Amazon is distant, bound by an online, shared jobs platform — a sort-of resume Dropbox that both qphase and Amazon can access without necessarily interacting directly. Amazon recently began a pilot program with this database company, called BountyJobs, which is meant to streamline the filling of companies' employment needs by acting as a middleman to a large network of recruiters.

Amazon has 20,000 open jobs and relies on "thousands of recruiters" to fill them, according to an Amazon spokesperson. The jobs posted on Amazon's website are squeaky clean. But as recruitment moves outward, it is unclear what, if any, responsibility the commerce giant feels for reviewing the language some of those recruiters choose to use or how many qphases are in the bunch.

In fact, it was not until weeks after Crosscut contacted Amazon that the company seemed to even realize qphase had recruited on its behalf.

When initially reached for comment about the qphase job posting, the Amazon spokesperson denied ever working with the company or that Amazon had received any applications from qphase. “We have never worked with qphase Technologies Inc.," the spokesperson said in an email in March. "This job description wasn't written or approved by Amazon and does not reflect our hiring practices.”

But when Crosscut spoke with qphase's Director of Business Development, Richard McKee, two weeks later, he spoke in detail about using BountyJobs and the sorts of openings Amazon was posting. He also eventually admitted that one of his recruiters based in India had added the maximum experience provision.

McKee then said he had been mysteriously blocked from accessing Amazon jobs on BountyJobs without explanation and assumed it was because Crosscut had flagged the job posting.

When contacted again, the Amazon spokesperson said that, in fact, it had received resumes from qphase via BountyJobs. "When I last communicated with you, Bountyjobs had told us that qphase was not recruiting for any of our roles," said the spokesperson in an email. "However last week BountyJobs came back to us and said they were wrong and that qphase was recruiting for a handful of our positions."

The spokesperson went on to confirm that Amazon asked BountyJobs to block qphase.

"We require that all recruiters working on Amazon job openings follow the law, including [equal employment opportunity] requirements, and that was included in the contract with BountyJobs," the Amazon spokesperson said in an email. "When we learned that one of the recruiting firms working with BountyJobs was using inappropriate language when recruiting for open roles, we banned them from sourcing our jobs."

Amazon acted quickly when it realized there were potential issues with how a recruiter was advertising jobs. However, when asked what oversight mechanisms Amazon had in place to ensure it was not soliciting resumes via biased postings from other recruiters, beyond a reporter pointing it out, the spokesperson did not immediately respond. In a follow-up exchange, the spokesperson reiterated the company's insistence on working only with recruiters who adhere to accepted standards: “We are constantly looking for talented individuals and we give equal opportunities to anyone who applies for our tens of thousands of open roles... We require all of our recruiting firms to abide by the law and prohibit discrimination against any applicant for any reason.”

This could be an important point. Because while Amazon denies culpability, calling qphase a "vendor of a vendor," employment law doesn't necessarily provide any real leeway based on the outsourcing of recruitment. "The employer cannot avoid liability by saying, ‘oh we didn’t do this, our (recruiting) agency did this,' ” said Muslima Lewis, Senior Attorney Advisor in the Office of Legal Counsel at the federal Equal Employment Opportunity Commission. Lewis says determining liability varies on a case-by-case basis. That Amazon reacted as quickly as it did to block qphase meant it wouldn't likely see punishment. But companies cannot necessarily continue to use the head-in-the-sand argument.

Pinpointing age discrimination is not always cut and dried; even wording far less explicit than "maximum experience" can cause trouble for companies. "There are words that have been used that are code words for younger workers, like 'digital native,' " said Lewis. "Anyone who’s older than 40 would probably not be a digital native. It’s not unusual for us to see something not specific to age but [it] is related to years of experience or years out of college or digital native."

And maximum experience? "Posting maximum years of experience could absolutely have the effect of discriminating against applicants who are protected under the [Age Discrimination in Employment Act]," said Lewis.

Others found the posting concerning as well. When presented with it, the spokesperson for Seattle’s Office of Civil Rights, Elliott Bronstein, concurred that he’d never seen that language before and forwarded the information to an enforcement manager. Had the posting been written by Amazon, said Bronstein, the Office of Civil Rights would likely have opened an immediate investigation, a relatively rare step for the small city office to take without an individual complainant.

Because the posting was written by a recruiter, it's unclear whether OCR would open an investigation. But Bronstein added, "If there is someone willing to come forward who has been impacted by this, we definitely would conduct a full intake process to weigh the information as a possible charge."

The tech world’s struggle with ageism is no secret. Among Silicon Valley’s major players, there have been 90 age-discrimination suits filed since 2012, according to a USA Today count last November. Facebook’s Mark Zuckerberg famously told a Stanford audience, “Younger people are just smarter.” And in March, Illinois Attorney General Lisa Madigan opened an investigation into whether online tools for finding work were inherently ageist.

McKee with qphase spoke openly about what he thought Amazon and similar companies wanted. "Let’s say you’re right out of college and you’re a computer geek and you’ve learned all these modern java skills … all kinds of cutting edge new technology," he said. "A lot of times the guys with over 10-20 years are not entrenched in that technology. They haven’t updated themselves on modern technology. It’s not really age discrimination; it’s really skill discrimination."

Amazon, in particular, attracts a young, relatively inexperienced workforce. The tech-giant's median employee age is 30 (compared to 42 nationally) with only five years of experience in their field, including work outside of Amazon, according to PayScale, a Pioneer Square-based firm that offers pay and compensation software and services. That number is roughly on par with other tech-giants like Facebook and Google.

Even for people in their 40s, the tech world can be frustrating.

Mike, a 42-year-old who doesn't want his last name used because he is still looking for employment, worked for more than 13 years as a data analyst for various science and engineering companies. In 2012, he returned to school to get a degree in Computer Science. According to his transcript, he graduated with a 3.66 GPA. “I didn’t expect to be handed a job when I graduated,” he said in an email, “but I expected to be competitive for entry-level positions with a new [computer science] degree plus career experience in project management, engineering support, and data [quality assurance/quality control].”

The response, he says, has been “crickets.” “With Amazon in particular," he says, "I’ve applied for dozens, and dozens, of entry-level engineering and support roles over the past two years with maybe three-four callbacks despite their huge hiring numbers."

Proportionally, qphase's presence in the Amazon universe was minuscule, recruiting for 43 jobs according to McKee, 26 according to Amazon. The partnership with BountyJobs, the shared jobs recruitment platform, is only a pilot being used for just 162 openings.

Nevertheless, the age and diversity issues of the tech world are sensitive enough that when something as explicit as qphase's maximum experience slips through the cracks, it will raise questions with people like the consultant or Mike about how many other vulnerabilities exist in the system, for Amazon and other tech companies.