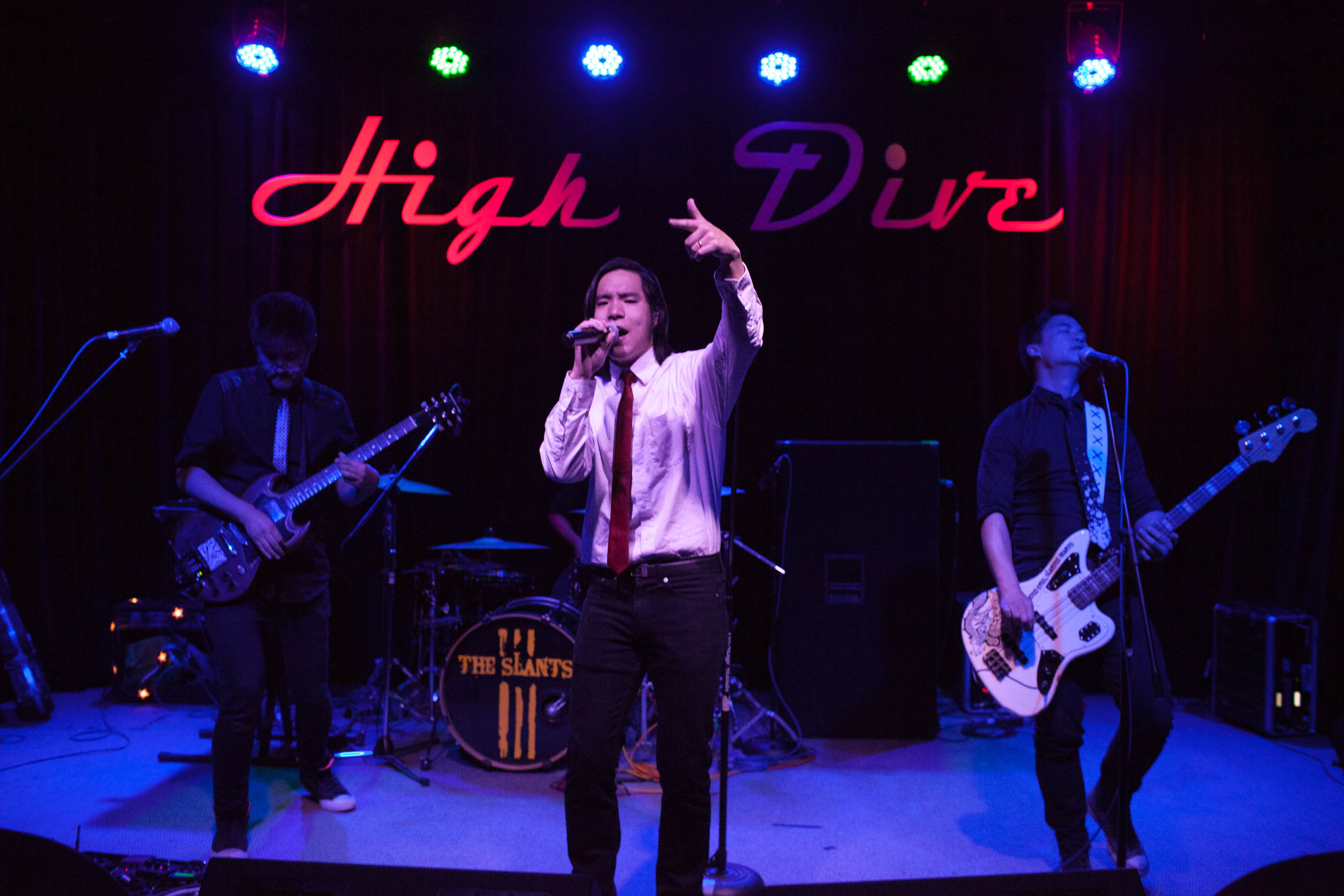 The Slants, a Portland-based rock band, performing at The High Dive in Seattle on May 10, 2017.

Update: On June 19, the U.S. Supreme Court ruled in favor of the Slants, finding that the government cannot discriminate against groups based on their "viewpoints." T​he ruling could have a far reaching impact in other prominent trademark cases.

What’s more offensive? Singer Miley Cyrus pulling her eyes back in a slant-eyed gesture? Or a rock band named The Slants? To complicate things even more, what if the members of said band are all Asian American?

“For me, it’s about the right for marginalized communities to say what’s best for themselves and not have some government agency make that decision for us,” says Simon Tam, the founder and bassist of The Slants, a Portland, Oregon-based rock band. Since 2009, the band has been locked in a First Amendment legal battle with the U.S. Patent and Trade Office over its effort to trademark its name.

The federal agency has twice denied the band’s trademark application because it views the name as disparaging. After years of legal maneuvering, the Slants’s case was argued before the U.S. Supreme Court in January.

The high court is expected to deliver its ruling as soon as June. That ruling could have an impact on other high-profile trademark cases involving the Seattle-based all-female rock group Thunderpussy and the NFL’s Washington Redskins football team.

Dressed in a black shirt, tie, jeans and sneakers, Tam talked recently about his legal case to law students at the University of Washington. With a PowerPoint, the 36-year-old detailed with humor and passion why he has fought so hard to trademark The Slants name.

“The interesting thing about it is that people only associate ‘slant’ with the outdated racial slur,” he says. The Quentin Tarantino movie Kill Bill was part of his inspiration to name the group The Slants. Tam was taken by how badass the Asian characters were portrayed in the 2003 film, something he had not seen before.

Tam, whose parents emigrated from China, knew that some people would find the band’s name offensive. But he saw an opportunity to convey a positive spin especially since the band members were Asian American.

“We can talk about our perspective, our slant on life if you will, and what it’s like to be people of color navigating through society in the entertainment industry while being able to pay homage to Asian American activists when we use the term ‘slant’ in a re-appropriated way,” he says.

Tam decided to apply for a trademark at the suggestion of an attorney friend who told him it’s not very expensive to do; it’s easy and it’s important because major record labels sometimes won’t actually sign an act unless they have a registered trademark. But the process proved difficult as Tam learned about Section 2(a) of the Lanham Act, the federal trademark statute that bars registration of “scandalous and immoral marks.”

“When I first got the phone call from our attorney, I thought it was a practical joke,” says Tam, who thought he had filled out something incorrectly on the application. His lawyer then explained his application was rejected because the name was disparaging to people of Asian descent. “And my first reaction was like, ‘Do they know we are of Asian descent?’ He says, ‘I think so, I think they just don’t understand where you’re coming from.’”

Tam found the rejection even more frustrating because the band had just completed a national tour with support from Asian American festivals and social justice organizations. But in rejecting the application, the Patent Office pointed to internet posts about Miley Cyrus pulling back her eyes and the word "slant" used as a racial slur.

The band appealed the decision and that started a long and costly process of getting support from Asian-American groups, newspapers and even a dictionary expert to help make their case. The appeal failed.

The band then took a different route, filing a new application and appealing on First Amendment grounds to the Federal Circuit in Washington D.C., which eventually ruled in their favor.

That led to the January oral arguments before the U.S. Supreme Court. “It was one of the most exciting and infuriating and inspirational things all at the same time,” says Tam.

The case sparked some lively questions and interactions from the justices. Tam recalls a particular point made by 83-year-old Justice Ruth Bader Ginsburg. “She was asking the solicitor general, the person representing the Trademark Offices position. 'Hey, doesn’t it matter to know The Slants are all Asian? And what they are doing is removing the sting from the word.'”

Tam is the only remaining original member of The Slants. He says the trademark case, while important, has been a distraction. “I’ve had to make tough decisions over the years. Do I pay this court fee, do I pay these legal fees, or do I pay for fixing our tour bus so that we can go back on the road?”

University of Washington law professor Zahr Said says this is why she wanted her students to hear about Tam’s legal journey “so they could understand the personal impact of litigation.”

Still, the trademark case has given the band some fodder for new music. Their latest album is titled “The Band Who Would Not be Named.”

“One of the things I’m most proud of is that 12 years ago, before I started the band officially if you were to Google 'slants' you’d have a bunch of benign things,” says Tam. “But now, you search for 'slants and you get a couple million results of an anti-racist Asian American band that is boldly portraying its culture, and that’s quite extraordinary.”