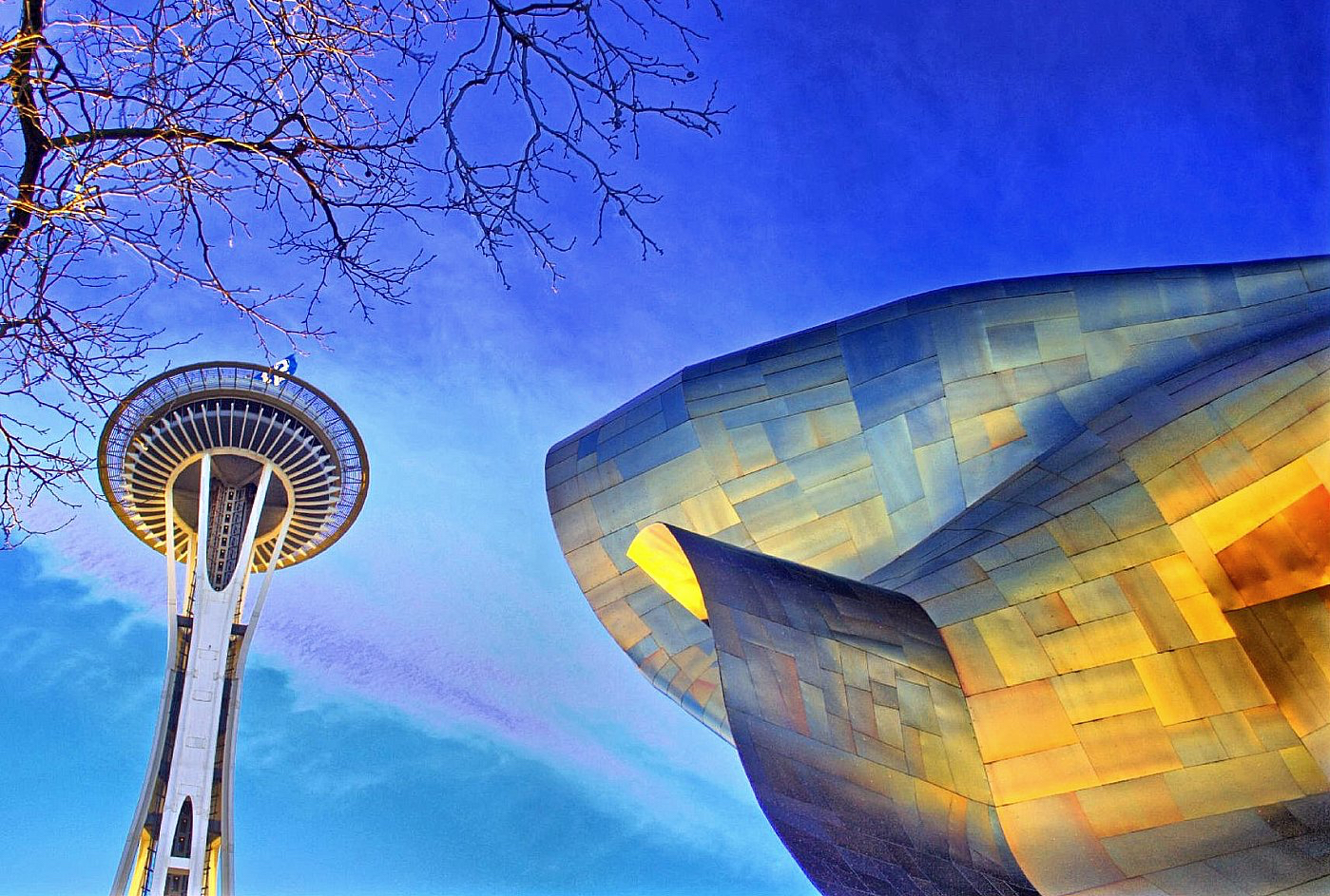 The Space Needle and MoPop: Seattle Center's future is under examination.

Despite an administration in the “other” Washington that is pursuing trade and immigration policies antithetical to ones that have helped make this free-trade, diverse and immigrant-friendly city a success, Seattle remains optimistic about the future. We’re still measuring success by the number of cranes on the skyline (more than 60), Amazon is on a hiring binge, and even President Donald Trump’s people are considering opening a luxury hotel in town to piggyback on our success. Short of taking a hit from a North Korean nuke, our growth and urban optimism seem unshakable.

One sign of that is the plan brewing — once again — for a Seattle Center refresh: our age-old, do-it-yourself rec-room remodel that never quite gets finished. I was struck recently by the durability of the concept of the Center, but also by how its refurbishment always seems to be on our civic to-do list (the last big plan was unveiled in 2008).

I recently saw a map of the Center site published in 1950 in the Seattle Post-Intelligencer — a dozen years before the Seattle World’s Fair that transformed it. The concept features Memorial Stadium, an opera house, a theater, the armory, the arena, an art museum and a tall, pointy needle right in the middle. In short, it’s remarkably like what was actually built in 1962, and has many of the puzzle pieces we’re dealing with today.

But what is the Center the center of? For half a century, it has been detached from downtown, spreading over 74 acres at the foot of Queen Anne Hill, connected by a once-futuristic monorail through the no man’s land of the Denny Regrade. Few would say it was ever the center of civic life. Attempts to revitalize the Center over the decades have been legion, and have involved nearly every mayor since Gordon Clinton in the ’60s to Ed Murray.

Growth is changing the dynamic, however. Downtown is on the move, expanding and poised to surround the Center. The office and residential high-rises of the Denny Triangle, Belltown and South Lake Union are maturing colonies of the urban core. The Gates Foundation is next door. Upzoning is planned around the Center grounds. The land on Mercer Street that borders the Center, where Teatro ZinZanni operated in a tent, has been cleared for a new development. The old Arena and its gargoyles has been demolished to make way for a new building. The city is looking at possible redevelopment of the sites of Memorial Stadium and the studios of KCTS 9 (which houses its sister organization, Crosscut). Not far away, high-tech businesses are locating near Interbay. The Center is finally in the middle of urban growth, not an appendage.

Mayor Ed Murray appointed Deputy Mayor Kate Joncas, formerly of the Downtown Seattle Association, to look to the future of the Center campus and to explore the possibilities of creating a new grand vision. There has been talk of locating a high school at the Memorial Stadium site. Open-space advocates have long wanted that land for more open space, but it is owned by Seattle Public Schools, which has been reluctant to let it go.

Redevelopment of some kind there seems inevitable. Many would like to see the Center more connected to neighborhood needs; building a high school or even housing would satisfy that. Others would like to see a more park-like Center that is better integrated with its surroundings — a neighborhood, not a campus. The new KEXP digs with its comfortable coffeehouse atmosphere is a great example of connecting the Uptown neighborhood with the Center.

Mayor Murray has also put KeyArena in play by soliciting proposals to refurbish it to NBA and NHL standards to make it viable for professional basketball and hockey. It makes sense for the city to explore this, although it puts it in competition with Chris Hansen’s proposed SoDo arena. If the Key — I prefer its original name, the Coliseum—is viable, it would utilize city-owned land, reduce costs and prevent the Coliseum from becoming a white elephant in competition with a better arena across town. The city is reviewing two half-billion dollar proposals for a new arena that attempt to meet modern needs while preserving key historical features of the arena’s original World’s Fair construction. The mayor is scheduled to pick his preferred plan in June.

Transportation and access have been and continue to be major issues. Seattle Center will get a light rail station eventually. It has the monorail —I will be writing more about the future of the monorail next week — and there are other transportation amenities coming along. One is that the Mercer Mess fix will make new connections by relinking several east-west streets now that the tunnel-digging machine Bertha has made the final leg of her journey to emerge at the new “North Portal” of State Route 99 near the Center. That should improve mobility and pedestrian connections in that traffic-snarled area. In addition, advocates are working on an urban trail corridor, Lake2Bay, which will also make pedestrian improvements that will better link South Lake Union to the Olympic Sculpture Park and the new waterfront.

The Center’s top attraction, the Space Needle, is also in the feasibility stage of a major upgrade, which would include better access to the top (via dual elevators on two sides), decluttered views (replacing the wire cage around the Observation Deck with glass) and interior changes to the restaurant level, such as installing a glass floor. The Wright family, which built and owns the Needle, wants to continue to make a long-term investment in Seattle’s icon, in part because its members believe in the potential and momentum of the Center’s ongoing development.

Says Needle chairman Jeff Wright, “We’re investing in the future. We expect to see amazing things happening in and around Seattle Center over the next few years.”

Although planning for the Center could be slowed by Murray’s decision not to seek re-election, Seattle’s rec-room remodel seems to be moving up the to-do list.

Disclosure: Knute Berger occasionally worked for the Space Needle as consulting historian.This article has been updated from a version that appeared in the April issue of Seattle Magazine.