For women in science, the challenges are personal 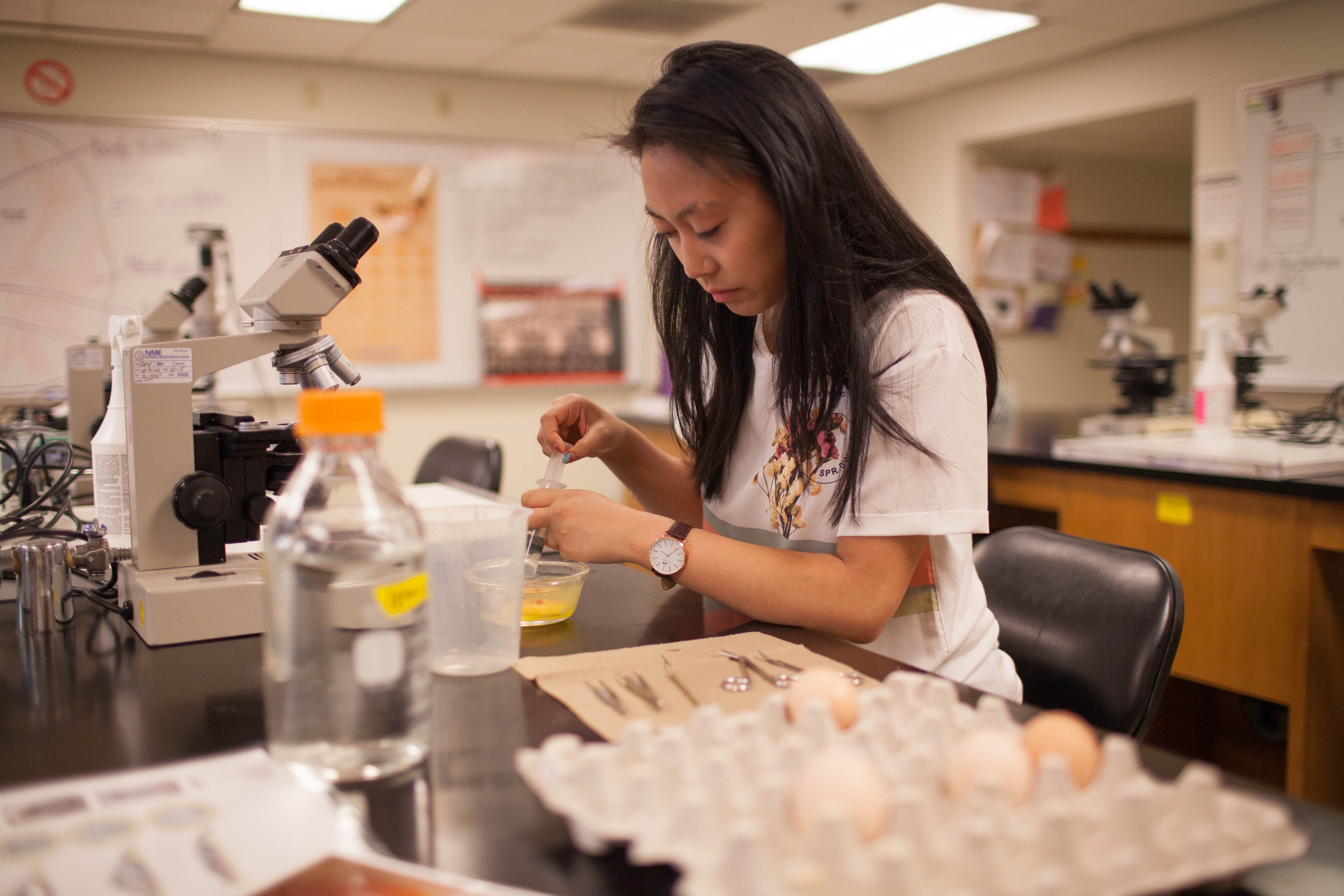 When Emily Levesque was 2 years old, her older brother was assigned a school project on Halley's Comet. It was 1986, and the comet was visible in the night sky when it was clear, so one night, her whole family went to the backyard. But Levesque was scared of the dark.

Her parents told her to look up. That’s when she got hooked to star gazing.

Today, Levesque is an assistant professor at the University of Washington's Astronomy Department. Her research is focused on massive stars and stellar evolution.

On her path from a little girl with a question about stars to a woman with a Ph.D. from the University of Hawaii and an Alfred P. Sloan Research Fellowship in Physics, Levesque has had almost nothing but good experiences in the sciences.

But her story stands in contrast to the experiences of many women, both as students and pursuing careers in science. Considerable attention has been devoted to the difficulties and occasional blatant discrimination

facing women in studying or working in computer sciences. But the problems and the search for solutions extend across the range of STEM fields — science, technology, engineering and math. And, for women at the state's largest university, the experiences, good or bad, can be very personal.

“I actually have been super lucky, as I have had almost 100 percent positive interactions with colleagues, students and faculty, and many of them have been males,” Levesque said. “I hate that this makes me a little unusual because there are so many women in science and astronomy who have just awful and miserable stories about what’s happened to them in their careers.”

Jessica Lundquist, a UW professor of Civil and Environmental Engineering doing research in spatial patterns of snow and weather, knows well the challenges Levesque was lucky enough to generally avoid.

“For me, throughout, the obstacles have been reconciling society's stereotypes of what it means to be a female with what it means to be a professional in science and engineering,” Lundquist said.  “I think one of the often-overlooked reasons young women choose not to go into STEM fields is that the female role models, the professors teaching them, do not seem happy and are not living lives that most young women aspire to.”

When Lundquist was about 13 years old, she started winning school awards for science and math, but she didn't have a lot of friends. Her mom told her to not let anyone know how smart she was, or they wouldn't like her.

The UW says it has increased the number of female faculty in 19 STEM departments across all the UW campuses by 93 percent since 2001, which the 15-year-old ADVANCE Center for Institutional Change sees as evidence of progress from its efforts to support women in STEM departments both in the College of Engineering and in Arts and Sciences. In engineering, for instance, 22.2 percent of tenured faculty are women compared to 15.6 percent nationally.

UW is hardly alone in trying to make these kinds of changes: Seattle University, for instance, boasts of a 45 percent female roster for its full-time faculty in engineering. Among the top 50 engineering schools in the country, however, the UW says it has the highest percentage of female faculty in a college of engineering. The UW also has seen an increase of 75 percent in the tenured or tenure-track women faculty in the College of Arts & Sciences’ science division from 2001 to 2015.

Joyce W. Yen, director of the ADVANCE Center for Institutional Change, said the university is at the forefront nationally in terms of female faculty and diversity. But some fields in STEM are still predominantly male oriented, and it’s not always easy to say why.

“It could be due to what subjects students get exposed to and how early they are exposed to it,” Yen said. “For example, math you get from the get-go, from K-12, where you don’t have engineering, physics, biology or chemistry until later, and it’s more like electives.”

Why high school girls are less likely than boys to sign up for a class relating to a STEM field is a subject that has engaged Dr. Sapna Cheryan, a psychology professor at the University of Washington. She specifically investigates the role of student stereotypes, and how to change those stereotypes by altering environments, including through media and role models.

“There is a masculine culture of these fields, which are student assumptions that in order to be in the field, you have to be like a computer geek or someone who is intensely focused in tech and computers and not so much with people,” Cheryan said. “There are also negative stereotypes in women’s ability to perform, like girls aren’t as good as boys. And because there aren’t as many women, it can be hard for women to have role models who they can have a sense of similarity to and connection with.”

Cheryan notes that the general belief about computer sciences being just for men is belied by history and the recent film “Hidden Figures,” which showed the critical role of African American women in developing NASA’s computer capabilities.

“Computer science was actually female dominated in the ’50s and ’60s and even until the mid '80s in the U.S.,” Cheryan said. “In the mid ’80s, computer science was graduating 35-37 percent women, which is almost double of the percentage now. So we were actually doing much better before than we are now.”

As a New York Times op-ed noted in 2015, Cheryan has wondered out loud whether part of the problem could be Hollywood and pop culture's focus on portraying European American and Asian males in computer science roles.

The same article noted that the work of Cheryan and others has helped demonstrate that simply changing the look of science labs to something more welcoming to women — including such steps as replacing "Star Wars" posters with ones depicting art or nature — can make a difference. UW, Cheryan said, changed its computer lab from a dingy and unwelcoming environment to something cleaner and brighter, which may be more welcoming to women students.

Female students in college still face issues of gender discrimination in their pursuit of STEM careers, however.

UW Sophomore Katherine Tran is a biology major who has always been interested in the building blocks of life. “I have often received comments that biology is not a real science and that engineering is what keeps the world running,” Tran said. The belittling comparison to the more male-dominated field of engineering “often makes me feel really awful. ”

When she attends interviews for STEM internships, it seems to her that the males get more initial acknowledgement. And, she says, when she asks questions in an educational environment, men frequently respond with condescending “mansplaining.”

“People in general should stop stereotyping fields of study and put their efforts in learning about each field instead,” she said, agreeing with Cheryan’s research on student stereotypes.

One way in which gender disparity could be reduced early on might be through mandatory classes before students get to college.

“States that have higher STEM requirements [in their school systems] have lower gender disparities later on,” Cheryan said. However, Cheryan said that classes by themselves do not necessarily change perceptions about these fields — something she herself experienced in dramatic fashion.

“My high school had mandatory computer science class in the ’90s and it didn’t do anything for the girls,” Cheryan said. “Forty percent of the boys in my class went into computer science or engineering but only one girl became a computer scientist. The class gave us exposure but wasn’t really taught in a way that made girls feel like it was for them.”

Another way in which the stigma could be reduced is through media, as Cheryan has investigated. Google has said that it began including more women scientists and computer experts in its occasional homepage salutes to people of achievement after others documented a wild disproportion in favor of males on its pages.

It’s something Levesque, the scientist who found her own way relatively easily, thinks about, too. “Increasing the visibility of women in STEM makes a huge difference,” Levesque said. “I think it was GE that put up a commercial a couple months ago and it was about treating scientists like we do other celebrities. The way we cover Kardashians now, why not for scientists?”

Levesque and Lundquist talked about their experiences and careers on podcasts for the UW Daily, here and here.

*Halley's Comet was last seen in 1986, not 1996. We have updated the article to reflect this and regret the error.